The four options are car, bus, train, and plane. We’ll let you know which is the best, the cheapest, the fastest, and the most convenient option for most travelers, but ultimately it’s up to you to decide what’s the best fit for you. Read on to see all the ways of traveling from Zurich to Geneva, and find the best option for you!

Zurich To Geneva: By Car (Best For Exploring Switzerland) 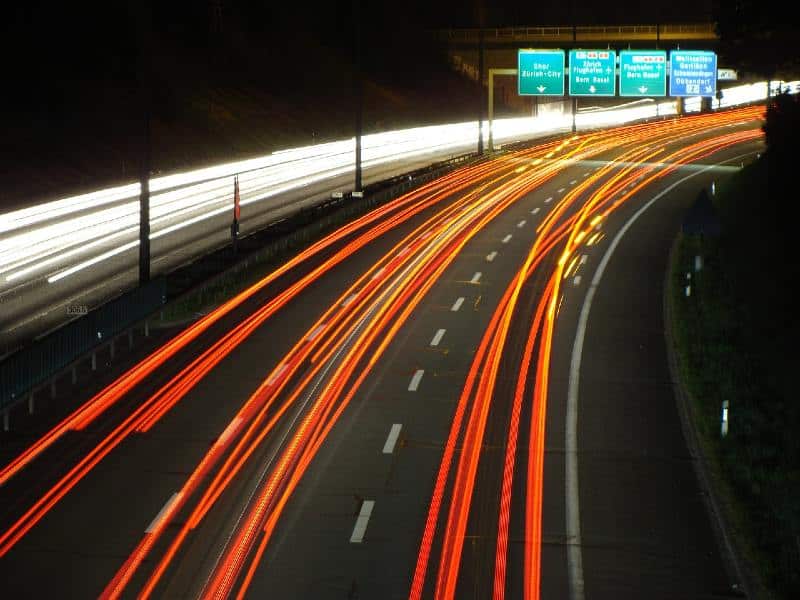 Zurich is about 275 kilometers away from Geneva, and it takes about three hours to cover that journey in a car. The two cities are connected with the A1 motorway, which is in excellent condition. The A1 motorway is a tolled road, so you will need to purchase a vignette to drive on it.

You can buy a vignette at any petrol station or post office for 40 CHF. It’s worth noting that you can’t buy a weekly or a monthly vignette – Switzerland only has an annual vignette, and they’re valid for a little over a year. The 2022 vignette is valid from December 1st, 2021 to January 31st, 2023 – if you’re traveling in December, it’s best to buy a vignette for the next year.

Driving from Zurich to Geneva is great for people who enjoy road trips and want to see more of the country’s beautiful nature. But it’s also quite pricey – the vignette alone is more than train tickets, plus there are all the other costs. Car rental is rather expensive in Switzerland, but usually, there aren’t any additional fees if you want to pick up the car in one city and leave it in another. Parking is also very expensive, especially in these two cities.

If it’s just you and one other person, it’s better to avoid driving from Zurich to Geneva. It’s much cheaper (and faster) to ride the train or bus, and driving only starts to fiscally make sense if there are at least three people in the car.

On the other hand, driving from Zurich to Geneva is the best way to get to see more of Switzerland. You have the freedom to take any detour you want, which isn’t the case when you’re traveling by train, bus, or plane. Although driving remains the most expensive way of traveling between the two cities if you need to rent a car, it’s also one of the best options if you really want to experience Switzerland.

It’s worth noting that driving from Zurich to Geneva is only recommended for experienced drivers, especially in winter conditions. The roads can get icy in the winter and if you’re never driven in those conditions before, it’s not a smart idea to get behind the wheel.

Zurich To Geneva: By Train (The Best Option) 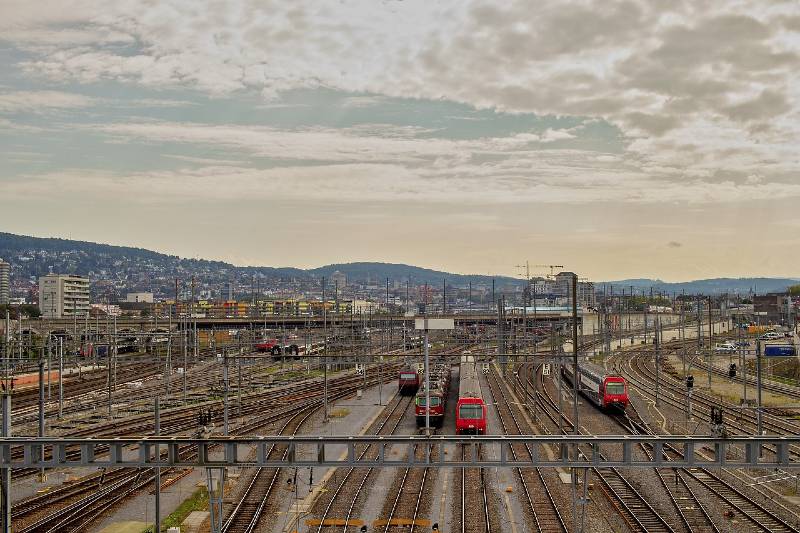 Switzerland has one of the best railway systems in the world, so it’s no surprise that train remains one of the best ways of traveling throughout the country. The trains are punctual, fast, clean, and offer some of the most scenic rides you will experience in your life. Switzerland’s Alpine scenery can’t be beaten, and the trains somehow manage to showcase the best of it.

The trains depart from Zurich approximately every half hour, so there are about 30 trains to Geneva throughout the day. The average journey lasts about 2 hours and 45 minutes, which is just a little faster than the car ride. Trains depart Zurich from Zürich Bahnhofplatz/HB and arrive at Gare de Genève. The earliest train is at 5:19 AM, while the last one in the day leaves Zurich at 8:32 PM.

You can choose between standard and first-class tickets, but for such a short ride it doesn’t make that much sense to pay nearly twice as much just to sit in first class. The ticket prices depend on the time of day and in some cases a first-class ticket for one train costs as much as a standard ticket for a different train. It’s worth noting that tickets are cheaper the earlier you buy them, so if you pick them up a few weeks or months in advance, you could save some serious money.

Ticket prices vary drastically, with the cheapest options being around 35 Euros and the most expensive ones at well over 100 Euros. If you’re trying to buy tickets for the next day, it’s hard to find anything below 60-70 Euros. That’s why it’s best to purchase the tickets a few weeks earlier, but keep in mind that Swiss trains are open for booking only two months in advance.

If you plan to visit even more cities, consider getting the Swiss Travel Pass. It offers unlimited travel through the country, with free tickets for trains, busses, and boats. The Swiss Travel Pass is quite expensive at some 200 CHF, so consider buying it only if you were going to spend even more money on train tickets.

In addition to that, you should always check whether there are any Supersaver tickets available. They’re last-minute tickets that are sold at reduced prices, and it’s possible to find train tickets from Zurich to Geneva for less than 30 Euros.

Zurich To Geneva: By Bus (The Cheapest Option) 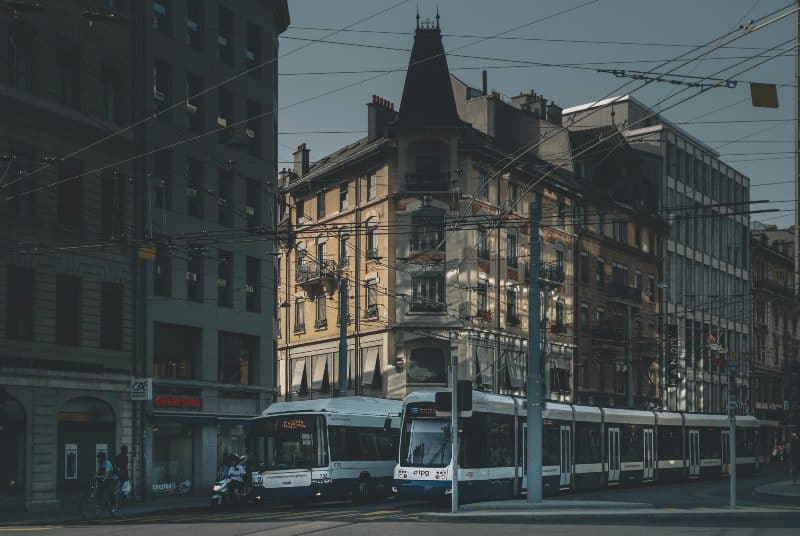 Unfortunately, there aren’t any direct bus connections between Zurich and Geneva. But that doesn’t mean you can’t travel by bus from Zurich to Geneva; you just need to get a little creative.

The closest you can get to Geneva by bus is Annemasse, a small town just 7 kilometers outside Geneva. The only problem is that it is in France, so the convenience of this journey will heavily depend on the Covid-19 restrictions that are currently in place. Be sure to check what the situation with the borders is because it’s not always going to be possible to take this route, especially for foreigners.

Buses depart from Zurich to Annemasse every day, and the ticket prices range from $10 to $20, depending on the time of the departure and the bus company. Also, tickets are cheaper if you buy them earlier. The ride is 4-5 hours long, depending on the traffic and road conditions.

Annemasse is about 20 minutes away from Geneva, and you can take a cab, rent a car, or ride the train. Train tickets are inexpensive starting at just $5 for the 20-minutes journey, so the entire journey from Zurich to Geneva can set you back as little as $15. Again, it’s recommended to check whether the borders are open for passengers in transit, just to avoid any nasty surprises along the way.

Taking a cab from Annemasse to Geneva is also an option, but it’s a pricey one. The 20-minute ride can cost anywhere from 35CHF to 90CHF depending on the traffic, so it’s not a great option if you’re trying to travel on a budget.

Zurich To Geneva: By Plane (The Fastest Option) 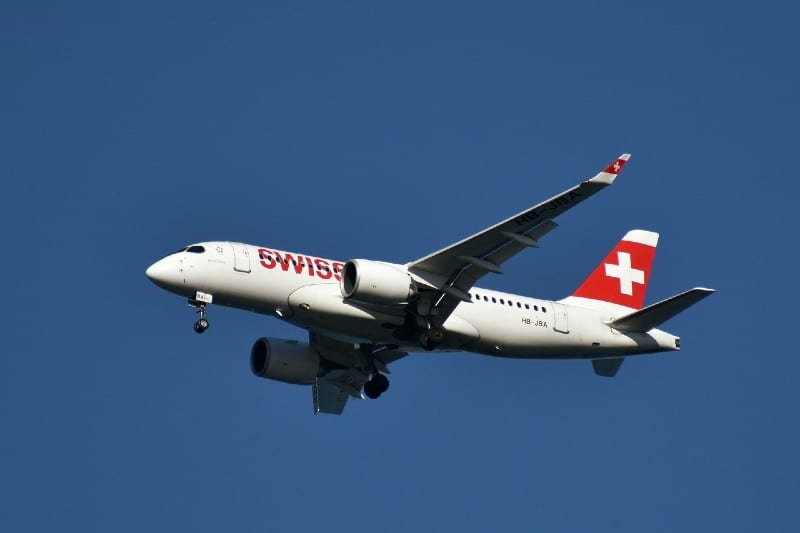 If you want to get from Zurich to Geneva quickly, you can just get on a plane. It’s a 50-minute flight from one Swiss city to the next, which is definitely the quickest way of traveling between the two cities. There are 3-4 flights from Zurich to Geneva every day – two in the morning and two in the afternoon. The morning flights are generally cheaper than those in the afternoon.

A one-way ticket via Swiss Airlines costs about 75 Euros if it’s bought a few weeks in advance, which is actually cheaper than last-minute train tickets. But, for this price you can only have a carry-on bag – if you want to check a suitcase for the flight, there will be an extra fee.

Another downside of flying from Zurich to Geneva is that you won’t get to admire the scenic views that you can get from a train, bus, and car. But at least you’ll be there in less than an hour, so whether the pros outweigh the cons is entirely a matter of personal preference.