Alcohol-free Beer for Kids in Japan

Alcohol-free beer has become a sensation in Japan. It all started in 2005 when a restaurant owner took an ordinary soda then known as “Guarana” and changed the name to “Kidsbeer”. Sales of this non-alcoholic beer marketed for children completely skyrocketed.

Mass-production of Kidsbeer was produced by the Tomomasu company, who made the beverage more beer-like by making it less sweet and more frothy.

The beers came in brown bottles with labels models after traditional Japanese beers. Kidsbeer quickly became a common drink found at other restaurants and stores. The beer tastes a bit like grape soda and when poured into a glass, it fizzes up and creates a head on top, mimicking real beer.

Sangaria followed Kidsbeer’s example and adopted their own beer. They began producing a beer called Kodomo no nomimono (“Children’s drink”) which has become a huge success in Japan. They also offer fake wine, champagne, and cocktails for kids. Their commercials show cheerful, energetic children, some with foam beer moustaches, drinking bottles of Kodomo no nomimono together. 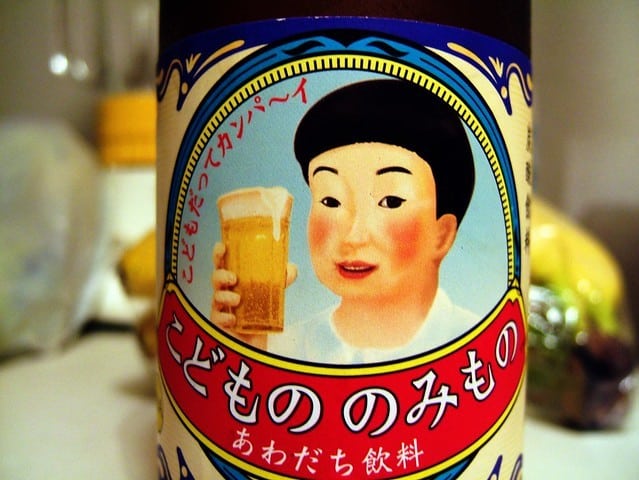 If a non-alcoholic beer specifically geared toward children was ever introduced into the United States, it would likely be a cause for war. Japan apparently has a different perspective. Fake alcohol such as Kidsbeer is seen as a way for children to feel included in celebrations and family events.

Here is a Kodomo no nomimono commercial, this time featuring a snowman!: