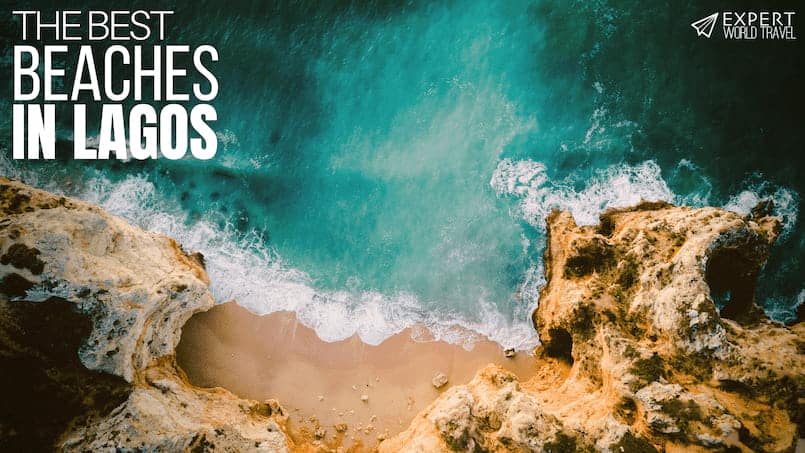 Lagos is a laid-back town situated in the Algarve region of Portugal’s south coast. Surrounded by stunning coastline, yet with plenty to offer in terms of activities, culinary treats, and nightlife, it’s not surprising that it’s one of the most visited towns in the Algarve.

Although there are tonnes of things to keep you busy in and around Lagos, one of its appeals is certainly its proximity to some of Europe’s most magnificent beaches on the Atlantic Ocean. Rather than one huge stretch of golden sand, the beaches of Lagos are more like little pockets of joy littered along the coastline.

There are so many of these pockets, in fact, that you won’t be able to visit them all in one day, and we definitely recommended setting aside at least two days of your trip for some good old-fashioned beach hopping. Even if you still want to spend one day heading out to the beaches around Farol da Ponta da Piedade, which is out of town.

Whether you’re into watersports, picnics, sunbathing, or just dining with a view, the beaches in and around Lagos have something to please everyone. Although they all have their own charm and character, we’ve put together this guide to the best beaches in Lagos Portugal.

So that, if you’re pushed for time, you can home in on the ones that will suit you best – happy beaching!

We’re starting off with the obvious here. Meia Praia (or Praia Meia as some like to call it), with its sand stretching for almost 5km, is hard to miss and is quite unlike any of Lagos’ other beaches. This expanse of sand is fairly flat, which makes it a the perfect beach for an early morning or evening run (you’ll struggle in the daytime, particularly in the warmer months, with the sun beating down on you).

The sand is also fairly rock-free, especially compared to other nearby beaches, so you’ll find that it’s also full of dog walkers, as both two- and four-legged animals can frolic without fear of rock-induced injury.

The flat sand also means you can see much further than you can on many of the other beaches, which makes it a popular choice for families with small children (there are less rocks for them to hide behind so you’ll know where they are without having to move).

Oh – and there’s a lifeguard there during the busy summer months too. Finally, it’s also the only beach in Lagos that offers surfable waves. When the conditions are right, you’ll see surfers flocking down to the beach in their dozens, ready for a post-work sunset surf.

This beach is also lined with restaurants, such as Linda’s Beach Bar, which has great views and does a good lunch, or Palamares Beach Club or Restaurante Jardim if you’re after something a little fancier. Praia da Batata is the closest to downtown beach in Lagos, which means it’s definitely one of the busier beaches. In the summer months, you can find it packed with tourists who don’t want to walk far to feel the sand beneath their toes but, in the winter months, it’s reclaimed by locals who trickle in around midday for some lunchtime sun, sea, and sand.

The beach itself is located just to the west of the mouth to the Lagos Marina, where you’ll also find the small fort of Ponta da Bandeira. It’s might not be the biggest beach, but that hasn’t stopped a small bar, the Bata Beach Bar, from sprouting up. This place rustles up great beach food (toasties, smoothies, and snacks) and even better cocktails, all at a reasonable price.

It’s close proximity to town also makes it a bit of a social hub – you’ll find small music festivals take place here during the summer months and, when these are lacking, many people simply create their own parties on the beach.

But why the name? Any of you that are trying to brush up on your Portuguese before your next trip might have noticed that this beach is named after a potato (batata)… Years ago, a ship laden with potatoes sank in the surrounding waters, and this beach was the site of all those washed up spuds (or so they say).

Praia dos Estudantes – Best For Nearby Photography And Sunsets

Often mistaken as an extension of Praia da Batata, Praia dos Estudantes is actually a beach in its own right, although it can be accessed from Praia da Batata via a passage in the rocks. There’s another passageway of the West that leads to the second part of this beach, and this is where you’ll find its most distinctive feature – a Romanesque bridge held high above the ocean connecting adjacent rock masses.

Perhaps unsurprisingly, this unusual sight is a photographers’ dream, and you’ll find many people trying to get the perfect snap of this structure, particularly in the evening light. Overall, though, if you’re looking for an outdoor sunset beach in Lagos, this one is probably your best bet. You won’t be alone if you’re there in summer, but it’s surprisingly quieter than Praia da Batata, even though it’s just few minutes extra walk.

And, if you are inclined to go just a little bit further, you could also visit Praia do Pinhão, just down the way a little. Praia do Pinhao: Best For Beating The Crowds

If you head west again, the next beach you’ll encounter is Praia do Pinhao, which is somewhat of a hidden gem of a beach in Lagos. And, it is rarely as busy as the surrounding beaches. Two small stretches of beach are separated by a picturesque rocky mass with a ‘walkway’ in between. To reach the beach you’ll have to work your way down the stone staircase that heads there from the clifftop. As it’s not as busy as the other beaches, there’s nowhere nearby to grab a quick drink or pop to the loo – so make sure that you plan accordingly. This lack of development, however, does make you feel more at one with nature and gives this beach a tranquil feel.

If you continue west from Praia do Pinhao for around 300m, you’ll reach the beloved Praia Dona Ana. The beach is named after a nun who escaped a grizzly end during the First World War by fleeing her convent as it was attacked by soldiers and heading to this beach via a hidden tunnel.

The Praia Dona Ana beach is commonly ranked as the most beautiful beach in Portugal, and it’s easy to see why. Its rock formations are out of this world, with boulders scattered across the sand and surrounding by idyllic turquoise waters.

Not only do these make for spectacular scenery but they also provide shelter from the sun – which you’ll need if you’re there at midday during the peak of summer. This area is also somewhat protected from the wind, so you’ll find the sea is calmer than some other nearby spots, which makes it a popular snorkeling destination.

Nearly the largest beach, and with a glowing reputation, Praia Dona Ana does tend to fill up during the summer months. This steady stream of tourist does, however, come hand-in-hand with the construction of the Marisol restaurant, which serves great food and will even bring you a nice cool beer to your spot on the sand.

If you’re around in the winter months, you might be lucky enough to explore this beach when it’s empty – the contrast is quite striking. The beach is located around 2 km from the center of Lagos and to access the beach, head down the wooden staircase that winds there from higher up – and brace yourselves for the walk up – there are 93 steps in total.

Praia do Camillo: Best Beach For Nearby Sights

Finally, if you thought 93 steps was bad, wait until you get to Praia do Camillo, accessed via a wooden staircase containing roughly 200 steps… It is, however, worth it. This small beach is flanked by impressively steep cliffs, and the mixture of gold and orange next to the turquoise waters really is astounding. There’s also a cool archway within the rocks and a nifty tunnel.

As it’s further away from Lagos center than the other beaches, it’s often a little quieter. It is, however, a prime spot for other nearby attractions. Once you’re this far out of town, you may as well check out the Ponte de Piedad Boardwalk, which offers amazing coastal views, as well as wooden seated areas, and is located on the clifftop above. The Ponte de Piedad is also spectacular from the water, and you’ll see tonnes of excited kayakers head by en route to the caves. Other Best Beaches In Lagos Portugal

Firstly, beware of the rocks. As much as their rugged appearance and unusual formations are a large part of what makes these beaches so spectacular, they can also be extremely hazardous. There are signs plastered along many of the cliff faces, but that doesn’t mean that some unfortunate people don’t ignore the signs and end up getting injured by loose rocks tumbling down the ochre cliffs.

You need to be careful in the water too – just because it’s hot on land don’t expect to feel like you’re swimming in the tropics. The water is fairly fresh all year-round and, while it’s possible to swim even in winter, make sure you know your limits and are prepared to warm up afterward.

Finally, although some of the beaches are watched by lifeguards during the busy months, they aren’t always around. The tides, currents, and the size of the waves can change quickly too, so, if in doubt, play it safe while you’re out swimming.

As you can see, there certainly isn’t a shortage of beaches in Lagos. Ranging from 5km stretches of flat white sand to hidden patches of sand reached via a tunnel, the beaches of Lagos are very different in nature. They do, however, all have the pleasure of being located in a very sunny part of the world, which makes exploring them enjoyable all year-round.

On top of that, the backdrop for these these beaches couldn’t be more spectacular thanks to the Algarve’s spectacularly rugged coastline. So, even if you don’t consider yourself a classic beach bum, make sure you check out at least a few of these marvelous beaches if you find yourself in the area.