Japan is famous for a lot of things, but anyone who’s ever been to the country will tell you that their chocolates are truly something else. In Japan, you can buy world-famous chocolates with flavors you never dreamed existed, as well as extremely delicious locally made chocolates!

Banana-flavored KitKats, delicious truffle-like chocolate squares that melt in your mouth, and biscuit sticks covered with chocolate are just a few of the confectionary products that are popular in this Asian country. Read on to learn more about the best and most popular chocolate brands in Japan, but also to see all the best places to buy them!

Want to know what chocolate brands are the most popular in Japan? Below is a list of the best Japanese chocolate brands, plus international brands that are extremely popular in the country with products designed exclusively for their market! 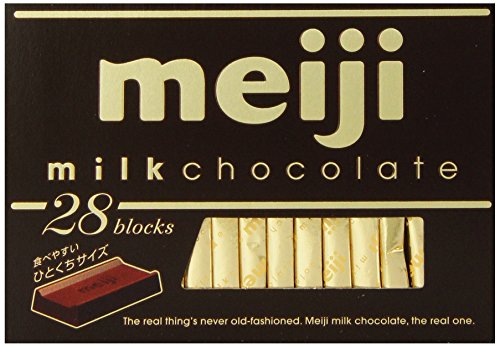 Meiji is one of the largest chocolate brands in Japan. It’s also the most famous of all the Japanese chocolate brands, and one of the few of them that’s sold internationally as well. Meiji was founded back in 1916 as a confectionary company, and its roots lie in sugar refining. They launched their first chocolate about a decade later, and the rest is history.

This company now offers more than 20 different product lines, and that’s just for their delicious chocolates. Some of their best-sellers include the Meltykiss chocolates, Chocolate Kouka, Chocorooms, and Almond Chocolate, but their most popular products by far are still their original Milk Chocolates.

Meiji The Chocolate is also a delicious treat, particularly for lovers of dark chocolate. This product line is specific for only featuring chocolate bars with 70% cacao content, and you can choose whether you want chocolates made with cacao from Peru, Brazil, Venezuela, or the Dominican Republic. Meiji even has a specific design for these chocolate bars, for the purpose of enhancing the cacao flavor.

Meiji chocolates are available for purchase in the United States in select shops and on Amazon, so you can have a box of the delicious confections at your doorstep in less than a day! 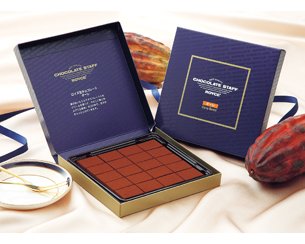 ROYCE is a confectionary brand that was first established in 1983 on Hokkaido, Japan’s northernmost island. That’s also where you’ll find all exclusive ROYCE shops, with the widest selection of these delicious confections. ROYCE launched their first chocolate bar in 1985, but it wasn’t until a decade later that they came up with their best-selling product ever – the Nama Chocolate.

These confections are made with a blend of milk chocolate, fresh cream, and just a dash of liquor. They melt in your mouth and they’re finger-licking delicious, whether you pick up the classic “Au Lait” Nama chocolates or the more exotic “Matcha” ones.

ROYCE makes lots of other chocolate confections, but Nama chocolates are without a doubt the first thing you need to try if this is the first time you’re hearing about this Japanese chocolate brand. Their Potatochip Chocolates are also delicious, as are their Chocolate Wafers, Baton Cookies, Pure Chocolates, and pretty much everything else they make.

The best thing about these chocolates from Japan is that they’re also available in the US! There are ROYCE stores in select cities throughout the United States, and you can even get them on Amazon! 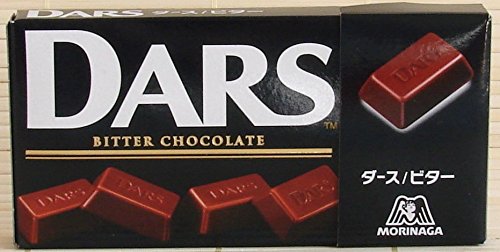 Morinaga is a confectionary company from Japan. It was established in Tokyo in 1899, so it’s actually one of the oldest confectionery companies in the country. Their chocolates are extremely popular in Japan, partly because of their excellent quality, but also because of their amazing marketing.

This brand often uses local and international celebrities to promote their products, and they’ve even managed to redefine Valentine’s Day traditions in Japan! In 1960, Moringa launched a commercial that implied that women should gift chocolates to men for Valentine’s Day.

The trend became incredibly popular, so much so that it’s still popular in Japan even today. In 2009, the brand came up with “reverse” chocolates, which are supposed to be gifted to women by men, further increasing their sales and reinforcing their image of being the best chocolates you can give someone on Valentine’s Day.

Morinaga has several product lines worth trying, but the most popular ones are their DARS chocolate bars. Their milk cacao sticks are also very popular, as are their chocoballs. All these products are available in the United States, and you can easily order from Amazon. 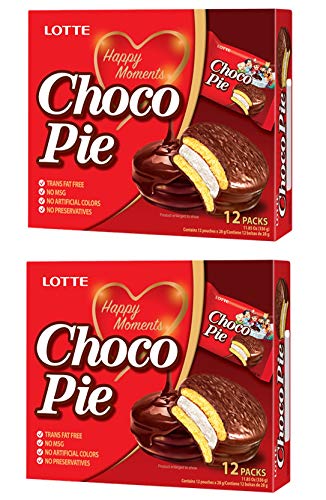 Lotte is a South Korean confectionary company that was founded in Tokyo in 1948. They expanded to South Korea in 1967, by establishing the Lotte Confectionary in Seoul. The Lotte Corporation today consists of 90+ businesses, and they’re involved in everything from candy to hotels.

Also, the company operates in more than a dozen countries around the world, so it shouldn’t come as a surprise that their chocolates can easily be found outside Japan. Lotte makes lots of different chocolate confectionery products, but their all-time best-seller is Choco Pies – soft, chocolate-covered biscuits with creamy filling.

This chocolate brand is also popular for almond chocolates, chocolate biscuits, sunflower seed chocolate balls, and Koala cookie chocolates. They’re also famous for their Ghana milk chocolate bars, which are made with cacao from Ghana. The name is an homage to the country, but it is a bit misleading since these are milk chocolate bars that contain a lot of sugar, and not that much cacao.

The Lotte corporation operates in lots of countries all over the world, and its products are available for purchase internationally. You can even get some of their confections from Amazon, but the chances that they’ll arrive melted are pretty high, unfortunately. 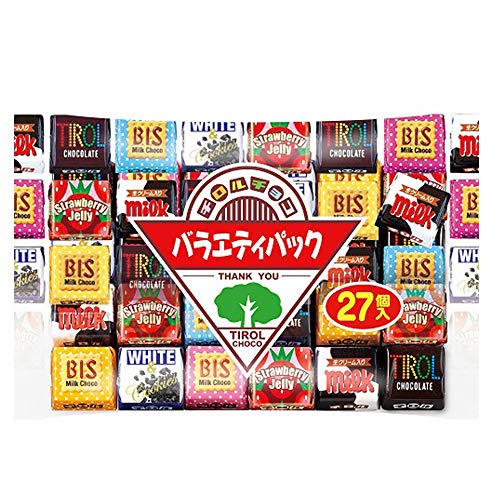 Tirol is a Japanese chocolate company that was established in 1962. They started off by producing small chocolate candies that were wrapped in various colorful packaging. As you can imagine, the fun colors quickly became popular with children, and even today they’re a brand that lots of Japanese people associate with their childhood.

The brand embraced this image, and today they operate under the slogan “One Tirol, One Smile, One Asia”, emphasizing the fact their chocolates make children smile across Asia. Tirol’s best-selling chocolates are small pieces in colorful wrappings, which are available in a wide variety of different flavors.

The brand is also popular for candies that come in some really unique flavors. The sweet potato chocolates are certainly interesting, as their bubble milk tea chocolates. In addition to the slightly odd flavors, Tirol also makes candies with some more traditional Japanese flavors like Mochi and Sakura tea.

You can find some of their products on Amazon, but the entire product range is not available worldwide. 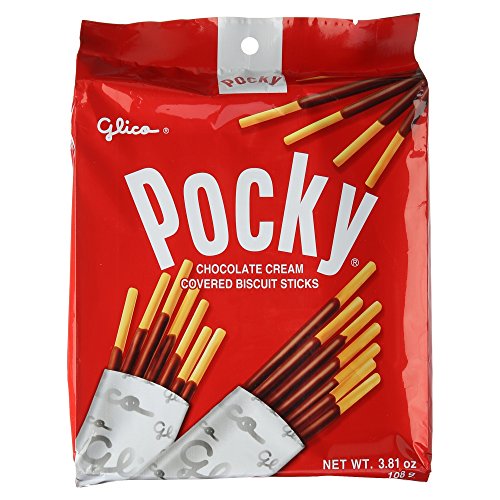 Glico chocolates are produced by Ezaki Glico, a Japanese food company that operates in 30 countries around the world. Their main business is the production of various confectionery products, including chocolate bars, dairy products, ice cream, and others. The brand was founded in 1919 and their first product was a caramel candy named Cucheico. 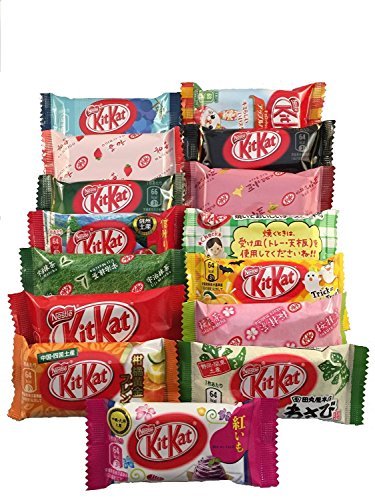 For some reason, KitKats are incredibly popular in Japan. You can get them in almost every single store, and you can get flavors and limited-edition KitKats that you never even knew existed! So, even though KitKat is not technically Japanese chocolate, the wide variety of flavors that are exclusive to this country make it one of the best chocolates to try while you’re in Japan.

KitKat chocolates were introduced in Japan for the first time in the 70s, more than 50 years after they were invented. They quickly became a favorite among the Japanese, which made the company launch the famous Matcha Tea KitKats in 2004. Fast-forward to a decade later when KitKat became the number one selling chocolate in all of Japan, dethroning the Japanese chocolate kings, Meiji.

Matcha tea is just one of the dozens of flavors that are exclusive to the Japanese market. KitKats in Japan are also available in Sakura tea, banana, raspberry, salted caramel, and many other flavors, plus seasonal limited-editions that are produced for special events.

Where To Buy Chocolates In Japan?

Tokyo is the only right answer! Japan’s capital is full of awesome chocolate shops where you can buy pretty much anything your heart desires, and below is a list of the best and most popular chocolate shops in Tokyo!

It’s widely agreed that Chocolate Bel Amer is the best chocolatier in Japan. They have several stores in Tokyo as well as in other cities throughout the country, so you should be able to find at least one of them while you’re traveling through Japan. Their chocolates are incredibly delicious, and if I were you, I wouldn’t walk inside one of their stores on an empty stomach.

True chocolatiers are never cheap and walking in there hungry could be catastrophic for both your wallet and your daily sugar intake. It would also be the best day ever for your taste buds probably, with all the different flavors and types of chocolate goodies that you can try at this amazing chocolate store!

Mamano Chocolate is one of the best bean-to-bar chocolate shops in Tokyo. They make everything in the shop from scratch, and they offer a wide variety of delicious, chocolatey snacks and beverages. All their chocolates are made with original Arriba cacao, and the chocolatiers actually stay in touch with the farmers who provide them with the raw bean, to ensure that everything goes according to plan.

Everything at the Mamano Chocolate shop is delicious, but I have to single out their take on the ganache slabs that Royce Chocolate sells under the Nama Chocolate brand. They are so incredibly tasty that it’s not recommended to try them unless you’re a pro at self-control. Otherwise, you might end up devouring everything in sight and leaving the store with a full stomach and an empty wallet.

Chocolatier Palet D’or is one of the best bean-to-bar chocolate makers in Japan. They’re popular for their new and innovative take on traditional Japanese chocolates, and this is the shop to be in Tokyo if you’re into French-style chocolatiers.

Palet D’or French for golden disk, which happens to be the shape of the chocolatier’s signature chocolates. They’re round medallion-shaped snacks decorated with leaves of gold, and they’re actually a signature of Maurice Bernachon, an iconic French chocolatier.

The medallions are just one of 50 different types of chocolates that are offered in this chocolate shop – their other popular products include chocolates with sake and green tea, for a dash of Japan in an undeniably French environment.

Japanese Family Mart is a local chain of convenience stores. There are thousands of them throughout Japan, and they’re the best place in the country to buy Japanese chocolates. If you want to get your hands on some Meiji or Morinaga chocolates, this is exactly where you will find them!

The confectionary isle is full of all the Japanese delicacies mentioned earlier in this guide, and you’ll even find lots of international chocolates here as well. If you have a chocolate craving that won’t be satisfied by Tokyo’s best chocolatiers, just find a local family mart and fill up your cart!

Royce Chocolate World is the best chocolate shop in Japan that’s not in Tokyo. This is in Hokkaido, at the New Chitose Airport Terminal and it’s an absolute must for anyone who is arriving in Japan through this airport. They sell ROYCE chocolates exclusively, and you can get their staples, as well as all sorts of freshly made chocolate delicacies.

If you’re ever traveling through Hokkaido, Royce Chocolate World is a chocolate shop that you don’t want to miss out on! It’s worth noting that there aren’t any other specialized Royce stores in other Japanese cities apart from Hokkaido, but there are a few in the United States.