9 Cities in Europe with Great Architecture

This is a touchy subject for many. After all, architecture is like art – how beautiful it is can be very subjective. It’s also greatly influenced by the culture and the environment upon which the architecture of a certain city has evolved. In Europe, however, you’ll never run out of structures to gawk at.

Europe is probably the best place to travel for anyone who loves architecture. Every city has a distinct look and feel. You can probably identify a city by how the structures are built. Add to that the highly efficient transportation across the continent, and you can travel through time and era when you visit one city after another.

The list is long for great European architecture. Here are a few must-sees especially if this will be your first time. 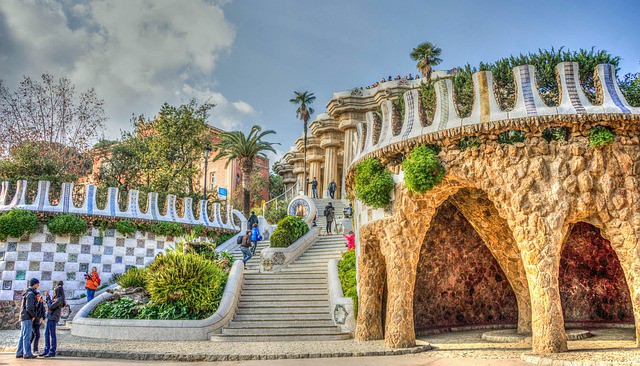 Every architecture enthusiast has heard of Antoni Gaudi, and there’s no better place in the world to experience his art than in Barcelona. Gaudi’s many works have hailed Barcelona as the center of Modernism. His most famous work is the Sagrada Familia, a church that started construction in 1892 and is said to be completed by 2030. However, Gaudi’s mark can be seen all over the city. One such distinct destination is Parc Guell, now a UNESCO World Heritage Site, which is located in the Gracia district of the city. It’s a garden complex with a collection of Gaudi’s work, including his home. 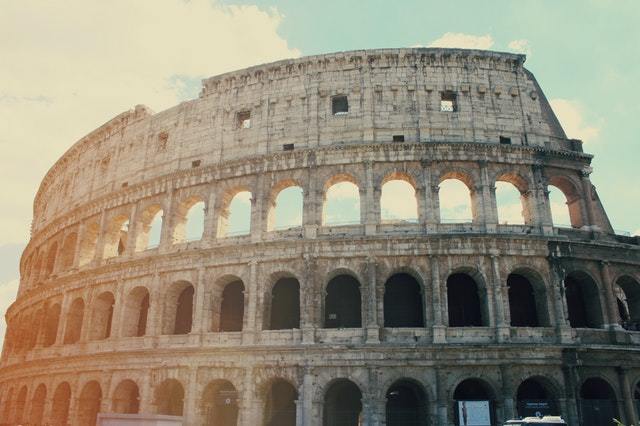 How can you leave Rome off a list of European architecture. It has some of the oldest and most notable buildings in the whole continent, and you could easily spend a week in Rome exploring all the things it has to offer.

Starting with the most obvious – the Colosseum, which dates to 80AD. It was the largest of its type at the time if was opened, and is still an impressive monument to Roman architecture today. The Pantheon is another impressive building you can’t miss on a visit to Rome, with it’s well maintained structure, impressive interior complete with dome and a surprising hole in the centre. This was once a Roman temple and now serves as a church.  The last one I want to mention is the Roman Forum, which although mostly only ruins, is still a stupendous reminder of how large and complex ancient Rome was. 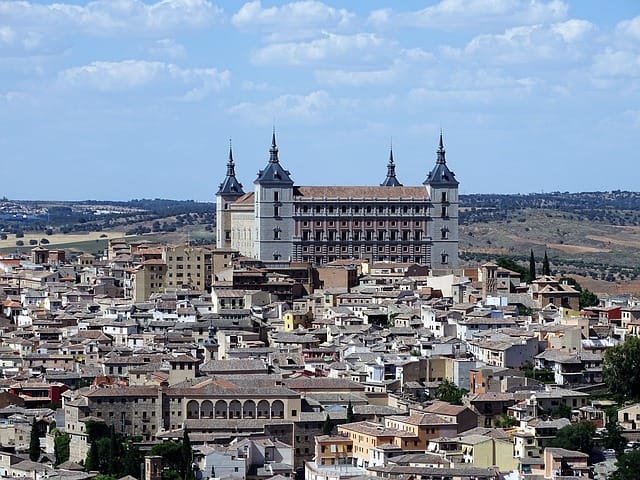 The perfectly preserved medieval city of Toledo looks like a postcard come to life. It’s an easy day trip southward from Madrid and is a pretty easy city to navigate. Toledo isn’t always on the itinerary when it comes to trips to Spain, but it’s high time it gets the attention. The city is filled with examples of traditional European architecture. Many structures date from the 13th and 14th centuries, hosting over 2,000 years of history and making it worthy of its designation as a UNESCO World Heritage Site. Dubbed as the “city of three cultures”, three major world religions laid claim in the city creating a labyrinth of Christian, Jewish, and Muslim convents, palaces, churches, fortresses, synagogues, and mosques. Masterpieces of the famous Spanish Renaissance artist El Greco can be seen throughout the city’s churches and convents as well as at the El Greco Museum. The first imposing structure anyone will see is the Alcazar, a fortress atop a hill that watches all over Toledo. 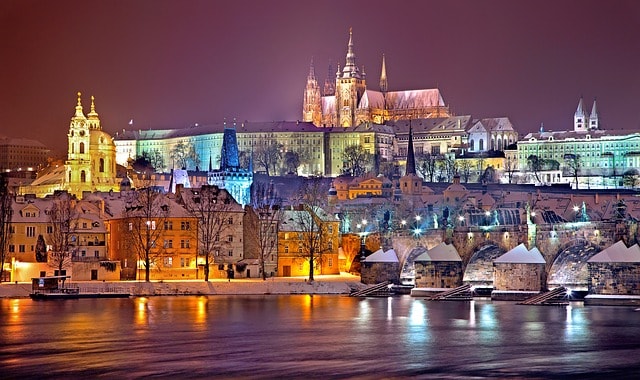 There are many vibrant cities in the Czech Republic but none more distinct than its showcase capital. Prague is one of the few cities not completely demolished after WWII. This left many well-preserved buildings revealing eight centuries of history. Walking through Prague is almost going through an architecture textbook, so review architectural styles to get a lot more out of the city.  Prague is also situated on the river that further punctuates the almost dreamy backdrop of the best Romanesque, Gothic, Renaissance-Baroque and Rococo styles. Here you will also see Communist Era architecture and postmodern designs that came after the end of the communist regime. The sprawling Royal Castle Complex is home to many soaring landmarks including the St. George’s Basilica and St. Vitus Cathedral. Another popular work of art is the Dancing House designed by Croatian-Czech architect Vlado Milunić and Frank Gehry. 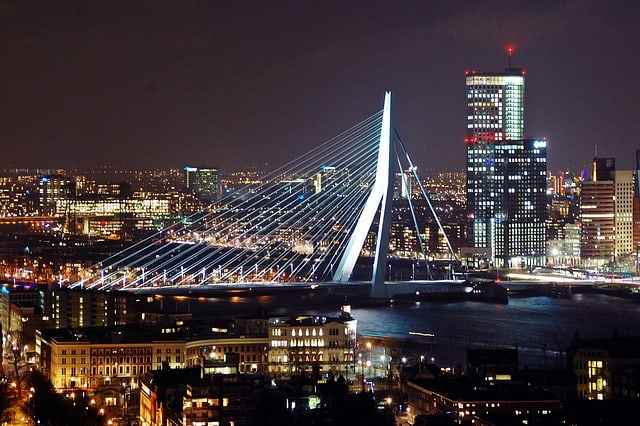 While Europe is teeming with examples of centuries-old architecture, the city of Rotterdam in the Netherlands, is transforming the landscape. The German invasion in May 1940 left the port city of Rotterdam completely destroyed. Despite its dark past, a new wave of modern and contemporary design has transformed Rotterdam into the world capital of architecture. The city hosts the International Architecture Biennale and the Netherlands Architecture Institute for many reasons, including revolutionary living spaces and awe-inspiring commercial buildings. A few medieval buildings can be found amidst new structures, but innovative and sometimes outrageous designs have earned Rotterdam its title, “City of the Future”. Visit the fun Market Hall where art and architecture come together, the unrivalled observation tower at the Euromast, or the world famous Erasmus Bridge. 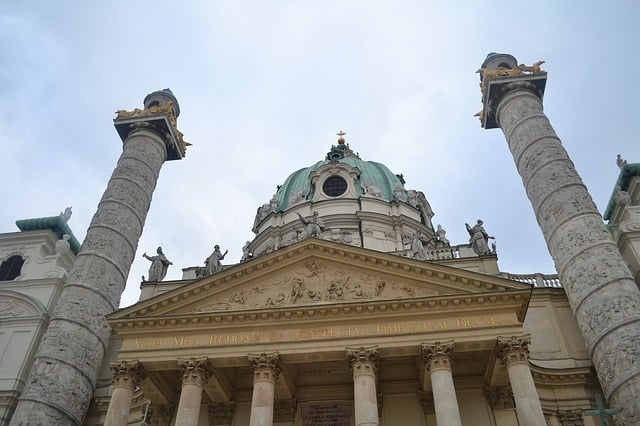 Vienna’s architecture spans from classicist to modern but its Art Nouveau masterpieces take center stage. This historic city center combines traditional and modern structures in a very harmonious way. As a result, this stunning city has a long list of must-see buildings and easy-to-navigate roads. Much credit is given to Otto Wagner, an Austrian architect and urban planner who has a lasting impact on how Vienna looks today. He has contributed many landmarks and is recognized as the key to Viennese Modernist and Art Nouveau architecture. One of the most famous examples of this are the pavilions at Karlsplatz, built in 1898 as station buildings of the Viennese city railway. The Church of St. Leopold or Kirche am Steinhof is also a popular haunt as Europe’s first church in the modern era.

And if you want even more things to explore, check out this great post on things to see in Vienna. 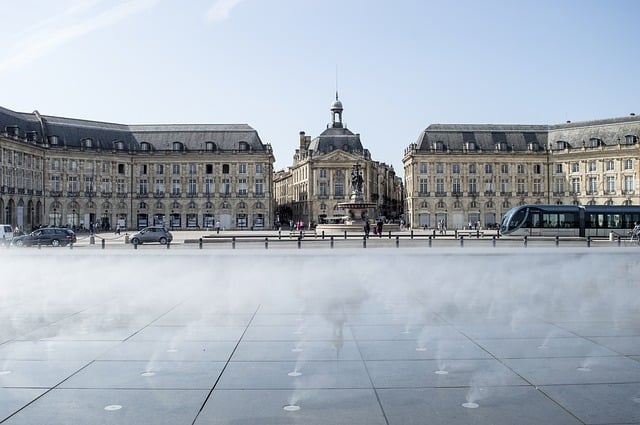 Bordeaux may be home to some of the world’s best vintage wines enjoyed in fancy chateaus and wineries, but there is much more to explore in this city. There are 362 historic monuments in Bordeaux, making it home to one of Europe’s largest 18th-century urban zones. It also holds a place on the World Heritage list as an “outstanding urban and architectural ensemble”. While Paris remains to be the most popular city in France, Bordeaux is no small contender. As the biggest city in the Aquitaine region of France, holidaymakers flock to Bordeaux for its location along the Atlantic Ocean and the Pyrenees mountain. No trip to Bordeaux is complete without a visit to the Place de la Bourse, which was once the home of Louis XV. Miroir d’Eau is the world’s largest reflecting pool while the Cathedral Saint Andre, an imposing Gothic edifice and the largest religious building of Bordeaux, is listed as a UNESCO World Heritage site. 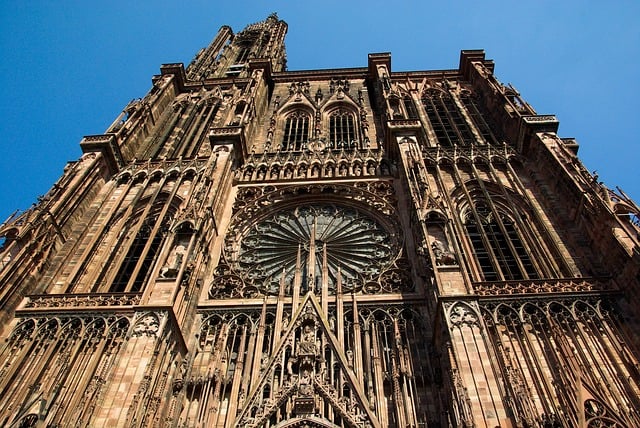 The history of Strasbourg runs deep and are well told by the buildings that make up the city. The historic center of Grand Ile holds most of the city’s architectural treasures. This made it the first city center to be classified a World Heritage Site. Architectural styles in the city are mixed. Gothic style bridges and structures are dotted with modern and post-modern styles in between. The most magnificent structure in the city is the Strasbourg Cathedral, adorned with a large astronomical clock. Surrounding this fine example of high Gothic style are timber-framed houses at Le Petite France, a district in the Grand Ile. Another important building is the Maison Kammerzell, the finest old burgher’s house and considered a gem of Alsatian architecture. 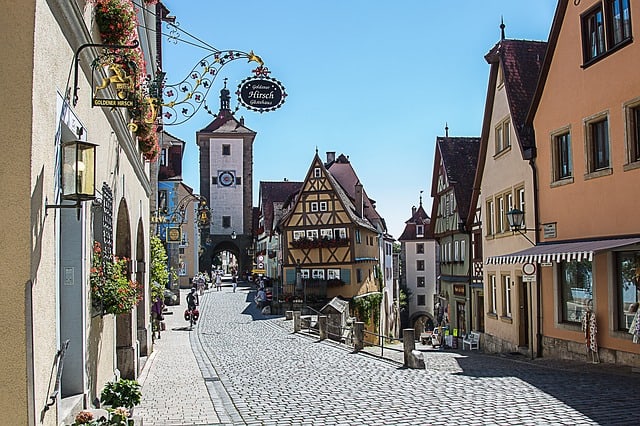 Rotheburg is Germany’s best-preserved walled town situated on the Romantic Road in Bavaria. This small, unchanged town lies about halfway between Frankfurt and Munich. The fairytale charm of Rothenburg is a treasure not many people know about. Think timber homes with gabled roofs and cobblestone streets, beautiful medieval architecture, undamaged 14th-century town wall, and its 500-year-old wooden altarpiece by Riemenschneider. Today, Rothenburg is technically a small town taken over by tourists. However, Rothenburg was Germany’s second-largest city in the Middle Ages. The city was reduced to poverty after 30 years of war. Growth stalled but preserved its medieval state. Walk through the former city’s history at the Plonlein or Little Square, the most photographed part of the town. You can also walk 1.5 miles on the Medieval Wall to see all of Rothenburg.

The Finest Architecture in Europe

It goes without saying that Europe is a great destination for lovers of architecture. Every travel itinerary will include the usuals: Paris, Amsterdam, Berlin, Athens, Rome, or Venice. Some itineraries will include smaller cities known for fantastic food and great museums. If you’re particularly interested in architecture, however, this list covers the more unique styles or a huge concentration of fine examples of traditional European architecture. Wherever you choose to go, perhaps the important part is to brush up on your architectural styles to better appreciate the city. You may just be staring at the best example of European architecture without even knowing it.