The Best Japanese Beer You Have Never Heard Of

What do you get when you take a serious Japanese brewer and send him to study for three years at a California brewery that makes the best IPA in the US? The best tasting Japanese beer that you have (probably) never heard of. 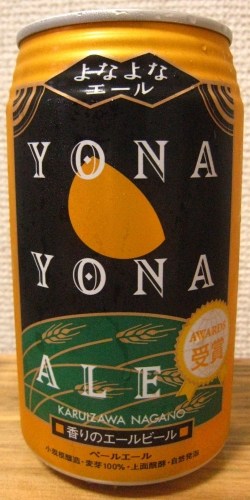 Yona Yona Ale is an American-style golden pale ale that is changing the dynamics of the Japanese beer market and winning the palettes of beer enthusiasts around the world. A remarkable cask-conditioned ale, Yona Yona Ale has won Gold medals in several international beer competitions. The beer has an amber color and creamy head, and the grapefruit and other citrus aromas give it a crisp finish.

While quite a bit richer and tangier than standard Japanese pale lagers, Yona Yona Ale’s hoppy flavor is balanced with sweet undercurrents and can be enjoyed by both beer enthusiasts and those that fall into the “beer is beer” category. The 5.5% alcohol content and refreshing maroyaka-ness give truth to the drinkability of the beer’s name – Yona Yona means Every Night in Japanese.

Yona Yona Ale is made by Yo-Ho Brewing in Karuizawa, Nagano Prefecture. The Brewery Director, Toshiyuki Ishii, studied brewing techniques at Stone Brewing in southern California from 1998-2001. Stone Brewing is famous for crafting massive American-style ales with tremendous punch, both in flavor and alcohol content.

In addition to Yona Yona Ale, Yo-Ho also brews some other great beers. Stout lovers should be sure to try Tokyo Black, an American porter whose aromas of burnt oak and coffee, hoppy bitterness, and spicy bouquet are bound to leave you wishing you had ordered more, no matter how many you get. Other beers include the National Trust Porter, Wild Forest Blonde Ale, Seasonal Scottish Ale 2006, and Yo-Ho Barleywine (a member of Michael Jackson’s prestigious Rare Beer Club).

While Yo-Ho’s following in Japan has steadily grown over the past several years, the popularity of its beers still pales (no pun intended) in comparison to macrobrewies such as Kirin, Asahi, and Sapporo. Yo-Ho brews provide a refreshing change from the push into the “as-cheap-as-possible” happoshu and even worse beer-flavored happosei liquor, so be sure to spread the word and do your part in supporting the market for new styles of ji-biiru in Japan.

People who live in Japan can order Yo-Ho beers at Rakuten.

Do you know where you can find Yona Yona Ale and other So-Ho brews on tap? Let us know so we can provide a list of places that serve nama glasses of these great-tasting Japanese beers!