Knot tying seems to be a dying art in the outdoor world unless your hobby depends on them like climbing, fishing, or sailing. As a sailor and a fisherman, I’ve been tieing knots since I was a kid and my name is often called to come and help choose and tie the right knot for the situation.

It amazes me how many outdoor enthusiasts don’t know how to tie a good knot, especially when they are so useful and can be key to a survival situation, which is what lead to this article. Here I’ll outline some of the most useful and must-know knots that will make your camping experience a little easier.

You learn knots that secure your gear, your hammock, securely connect two lines, fix a guy rope, and more. They’ll not only add to your safety and comfort but some can also help you get out of some sticky situations. 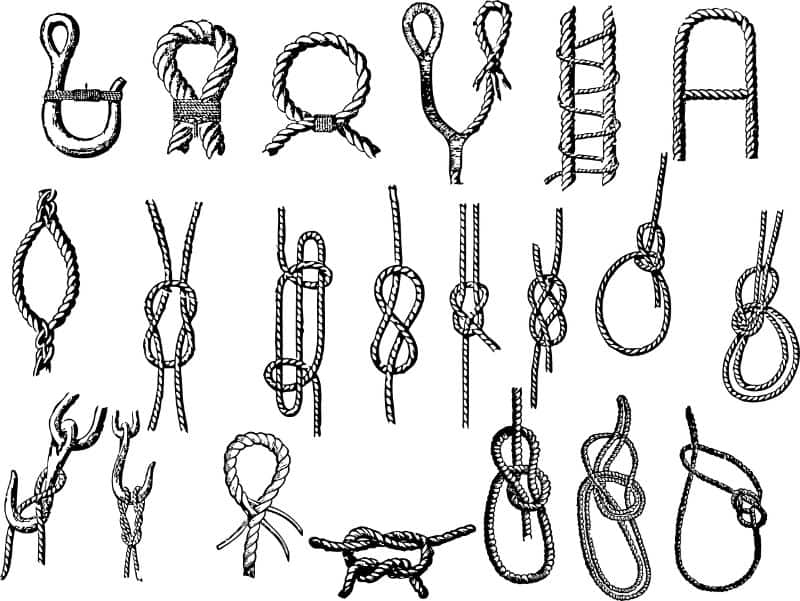 There are two terms to learn that will make understanding how to tie these knots a lot easier. 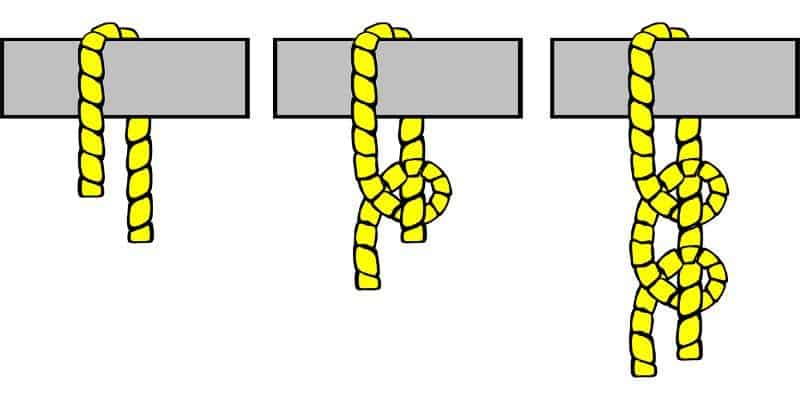 The half hitch is one of the easiest knots to tie and untie. It requires another object like a stick, post, or another rope. It can be doubled, tripled, quadrupled, in fact, you could tie as many as the length of rope allows you.

A single half hitch is best used for securing the end of the rope after you have tied a knot so it doesn’t come undone. A double hitch and above is great for securing a rope to a tree, post, or poles, quickly. You can use it to hang your gear or anything else but it’s not the strongest knot so don’t put anything too heavy on it.

You can keep going until you feel it’s secured. 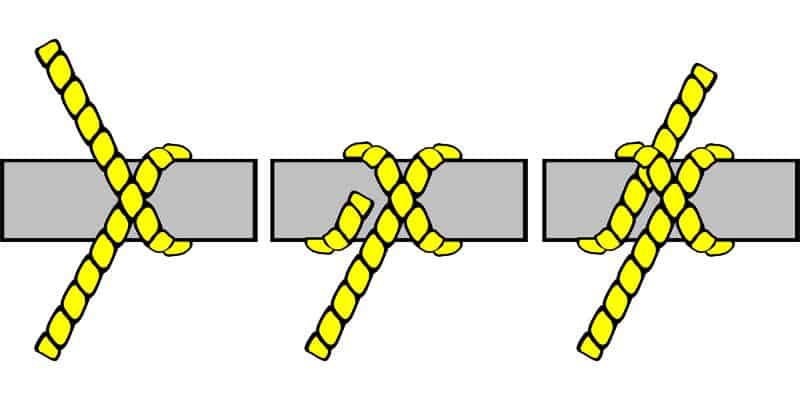 The clove hitch is the original cowboy knot and is the same knot used to tie horses to a fence post. It’s ideal for securing a tight line to a tree post, carabiner, or any other object. It’s a quick and easy knot that won’t slip as long as you tie off with a few half hitches that you just learned.

To tie a clove hitch take your tag end and loop it around a tree or other object. Then loop your tag end around again ensuring you go over the top and across the main line. Then pass your tag end under the second loop you just made and then tie it off with a half hitch or two.

This knot is meant to be basic but it can be a little tricky to get right and it’s worth practicing if you want to tie it quickly.

Tieing it over a post or stake is a lot easier. Take the tag end and form a loop and slide it over the post. Then make another loop and do the same but make it sit just above the first loop. Then tighten and tie off with a half hitch or two. 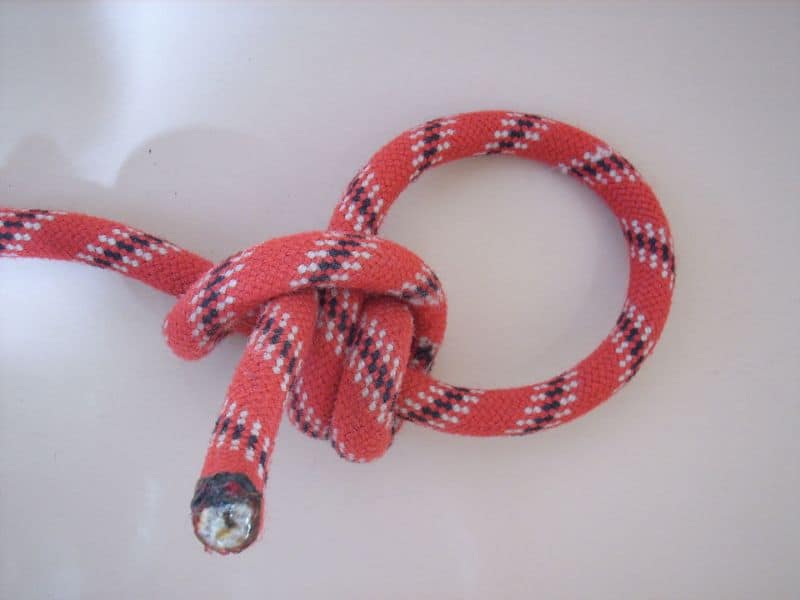 The taut line hitch is one of the most useful knots out there. It creates a loop that is adjustable to fit that is self-tightening and loosening. It’s the knot that would replace the stopper on your guy lines or that you could use to make sure your hammock is tight but adjustable.

Tieing the taut line hitch is like an extended version of the half hitch and here is how it’s done. You’ll need to find a solid object that won’t move to begin with, like a tree, otherwise, it won’t cinch (tighten) down properly.

To start, take your tag end and wrap it around the solid object to form a loop. Then take the tag and go inside the loop (like the half hitch) but do this twice. Then come out and wrap the tag end around the main line once on the opposite side to the first two loops. Then put the tag end through the last loop you created and pull the tag end until it’s tightened everything down. Now pull the main line where it enters the knot to let the hitch grip the main line.

This knot is a little tricky when you read it but if you look at the picture above it makes a lot more sense. 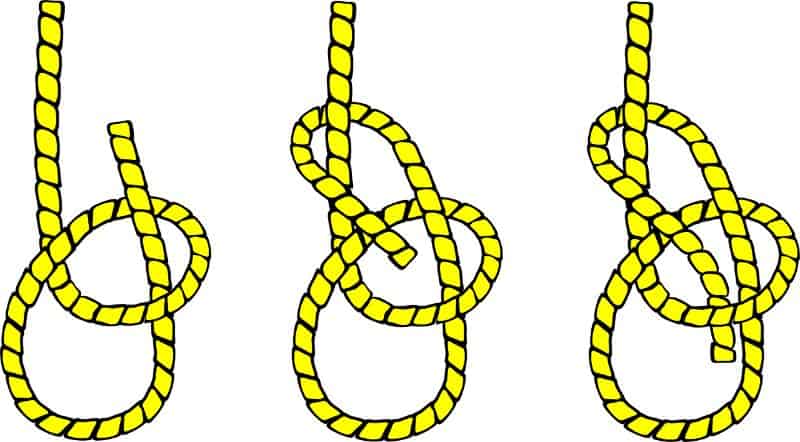 The bowline knot is one of the most used knots in sailing and is particularly handy as it creates a fixed loop that will never undo but can always be undone, no matter how tight it becomes. It has endless uses like creating a tow rope, using it at one end to attach two ropes together, using it to lift heavy things, or pull people out of a crevice. If there is one knot you should know it’s this one.

To tie a bowline, create a loop in the main line. Then take the tag end and go through the loop from underneath, out of the loop, around the main line, and back into the loop again. The hand way to remember this part is ” the frog (tag end) jumps out of the pond (loop), around the tree (main line), and back into the pond (loop).  You’ll have with what looks a bit like two loops merged together. Now tighten the knot by pulling on the main line and tie it off with a half hitch that will wrap around both pieces of rope that form the end loop.

You now have a secure loop that can handle almost anything, and no matter the pressure, you’ll always be able to undo it. 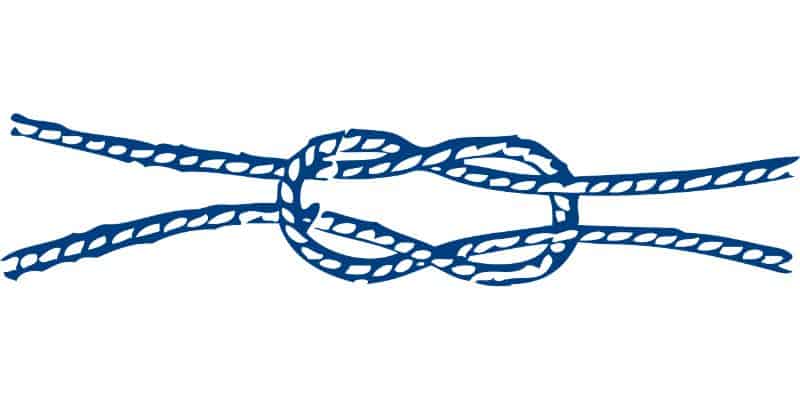 The reef or square knot incredibly useful for connecting two ropes together when you need some extra length. It’s also a good quick release knot when tied loosely around things like firewood or anything else you want to store neatly but access quickly.  It’s an easy knot to tie once you get the hang of it and there are numerous ways to tie it. Here is how I do it.

When tieing this knot, you’ll want two similar sizes of rope for it to be truly effective. If your two ropes are very different, use the Sheep Bend Knot below.

To tie a reef or square knot create a bend with the tag end at the end of one of your ropes. It should look a bit like the eye of a hook or needle. Now take the tag end of your second rope and go into the bend (or eye) from above, out the other side and to the right. Then come back around and over in front of the eye on the other line all the way around to the backside of the eye again, and pop it out the bend in the opposite direction of where it originally came in.

It does sound a little confusing but once you look at the picture and have a go it makes a lot of sense. 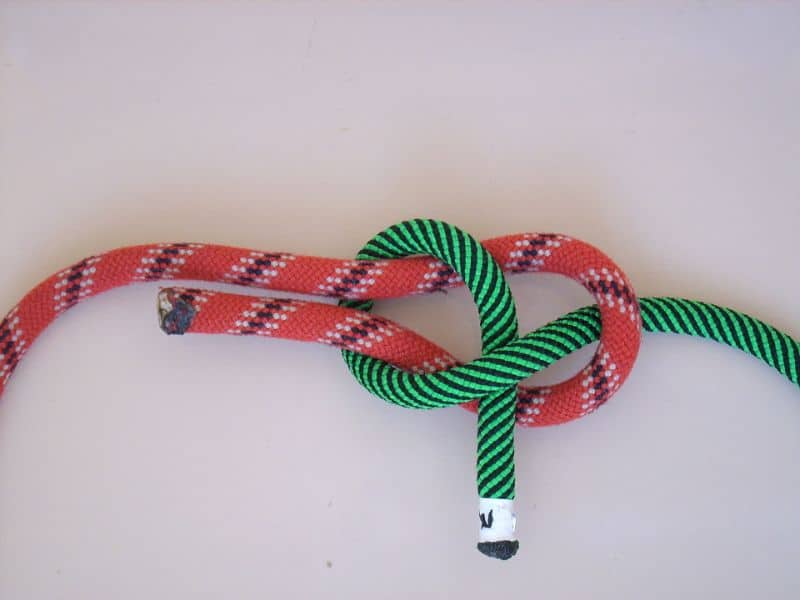 Like the square knot, the sheet bend knot also connects two ropes together and it’s the best knot to use when joining two different sizes of rope that are made from different materials. You can even use it to join two things that usually cant be connected. It’s an extremely useful knot that can get you out of a tricky situation and one that all outdoor enthusiasts should know. If you mastered the square knot above, this is similar.

To tie a Sheet knot you first have to work out which rope is more slippery or thicker than the other. Take the thicker/more slippery rope and for an eye/bend like you did with the square knot. Now take the thinner rope and run the tag end through the eye from the underside. Take the tag end and go to the left of the bend/eye, around the back of the bend, and come back over to the front side again. Now thread the tag end under its own mainline and tighten.

Again it may sound a little confusing at first but stick with it and it’ll become second nature. It very important that you go to the left so that the tag end is facing down to secure the knot from slipping.

The Figure Of 8 Knot

The figure of 8 knot is a very simple knot that is used as a stopper knot anywhere on a rope and is the building block to a lot of other knots. This knot doesn’t damage the rope either, unlike other stopper knots. Tieing it is super easy.

To tie the knot, run the tag end back on itself over the main line to make a loop. Then go under the mainline and come back around and end the knot by passing the tag end through the original loop. It’s very quick, easy and you should have it down in minutes.

The overhand knot is also known as a granny knot. It’s about as basic as a knot can get and you probably already know it but just don’t know the name of it yet. It’s another stopper knot like the figure of 8 above but this one does damage the rope and can become so tight that it’s difficult to undo. It’s really useful when you want a stopper that blocks a loop and is better than a figure of 8 in this case. The overhand knot is also integrated into a few other knots and is a great basic to know about for when you learn some more technical ties.

To tie the overhand knot, make a loop out of the main line and then simply run the tag end through it and pull to tighten. That’s it, just like tieing your shoelaces but even easier.

Summing It All Up

I hope you have found this article useful and have enjoyed your brief intro into the lost art of knot tieing. If you can learn all of these knots, there won’t be a situation you can’t handle. A broken guy line, a snapped bootlace, towing a car out of a hole, pulling a friend out of a ravine, hanging your hammock, joining two lines, and more will all be at your fingertips.

The key to getting these knots right and trusting them is practice, practice, and more practice. My best advice is to keep a couple of pieces of rope handy in your pocket for times when nothing is going on like when you’re on a bus journey or something or waiting for your coffee. Don’t give up on tough knots, they’ll click eventually. Some of them are rather complex but with some time they’ll become second nature.

One last thing is that you should never trust a rope you’re unsure about. If you think it’s dodgy, don’t use it, it’s not worth risking your life over. But, if you really need it, test the hell out of it. Wrap it around a tree, put all your weight on it and be sure of it.