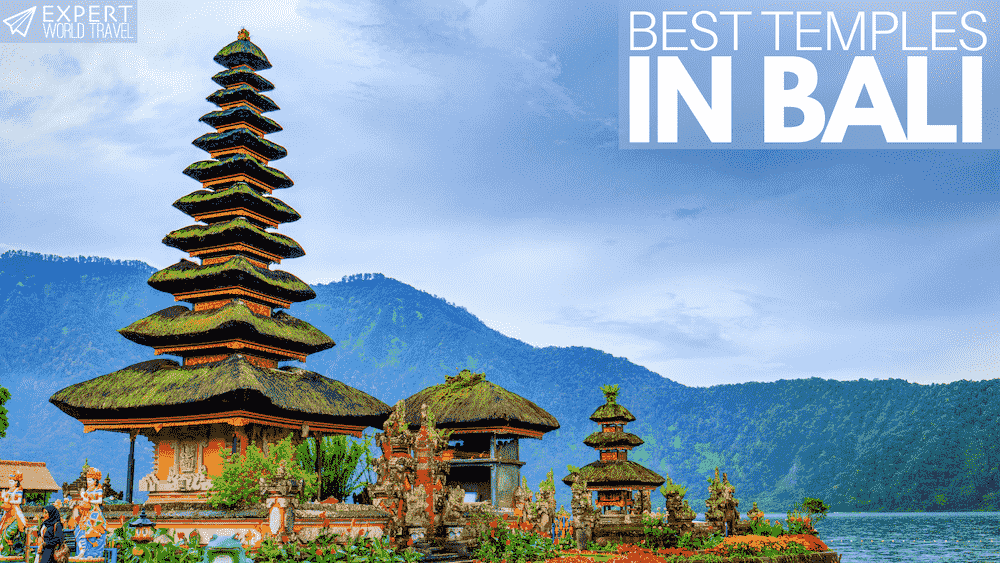 Bali is a little slice of paradise in Indonesia. The island is most famous for its incredible surf breaks and of course, stunning Balinese furniture, sun, sea, sandy beaches, and stunning coral reefs.

Bali is mainly Hindu, while most of Indonesia is Muslim, so it’s quite unique for the country. Hinduism is very much a part of Balinese culture and daily worship at one of the 20,000 Hindu temples is the norm.

Visiting one or a few Hindu temples is a must while you’re in Bali, but which of the 20,000 should you start with? To make things a little easier, here are the best temples in Bali. 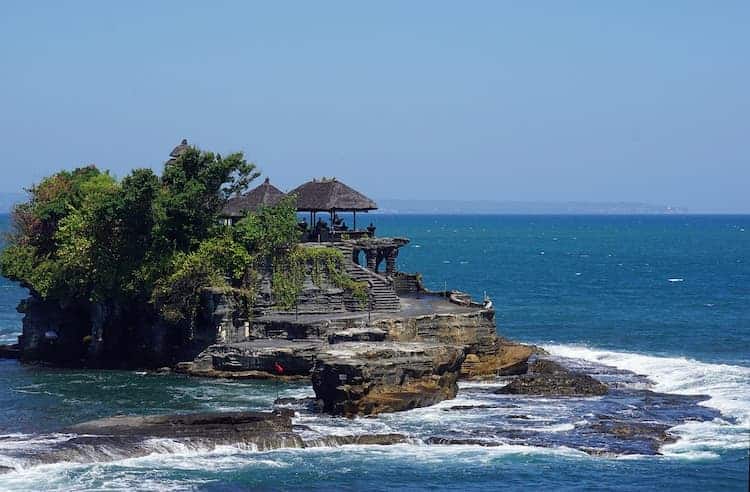 One of the most unique temples in Bali is Pura Tanah Lot. Tanah Lot means “land in the sea” in Balinese and it’s quite obvious how this temple got its name once you set your eyes upon it.

Pura Tanah Lot sits on the edge of a cliff and integrates rugged rock formations along the Balinese coast into the temple. It was built in the 1500s – ish, no one quite knows, but it is one of the most beautiful temples to visit in Bali.

Entrance costs around 20,000 IDR, which is about a dollar and forty cents, and there is nothing more soothing than wandering around the temple listening to the ocean crash against the rocks. Timing your visit with sunset is also a great idea as you can see it right from the temple.

While you’re there it’s worth checking out the smaller temples around it and there are even a few restaurants and some market stalls to keep you fed and happy so you can spend a whole day there without any worries.

You’ll find the temple about an hour and a half from Ubud in the Tabanan region of Bali.

Pura Besakih is over 1000 years old and is known as the mother temple in Bali. The temple sits on the southwestern slopes of Mount Agung about an hour’s drive from Ubud.

Pura Besakih is the largest and most holy Hindu temple in Bali. It actually consists of 80 individual temples rolled into one, a few of which are open to the public that you can wander around.

The biggest Temple in the complex of Pura Besakih is Pura Penataran Agung and it was built to represent the universe. There are seven shrines, each dedicated to the seven layers of the universe. The place has quite an energetical feel about it that you can’t quite put your finger on but you’ll notice it. If you’re in Ubud then going to the Pura Besakih temple in Bali is a must. 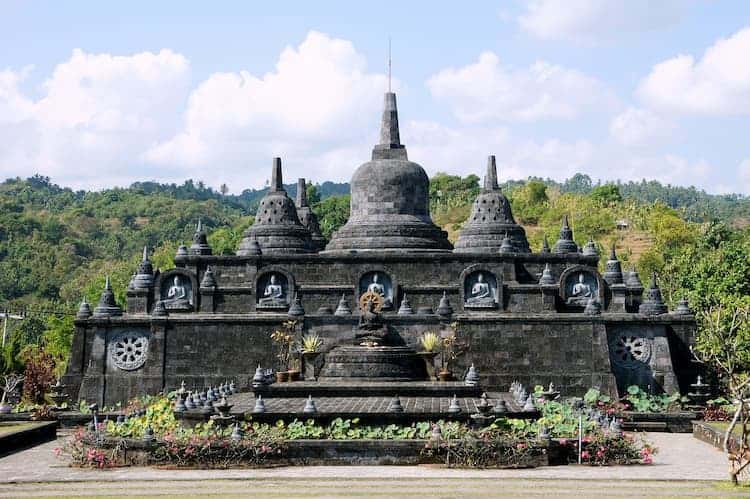 Lempuyang Temple is probably the most iconic temple in Bali and it’s not because it’s the highest, sitting at 1,175 meters above sea level, but it certainly helps.

If you’re feeling a little tired, you can gaze upon the temple from the gates but it really is worth climbing up the 1,700 plus steps to so make it to the peak of Mout Agung and see the temples dotted along the way. You’ll also meet long-tailed macaque monkeys along the way and see even better views across Bali, better than you’re likely to see anywhere else.

Getting to Lempuyang Temple is easy and it’s about a 3-hour drive from Ubud. Getting there early is worth it to avoid the crowds and see the views covered in that fresh morning light.

Pura Tirta Empul is one of the easiest temples in Bali to get to. It sits in central Bali, near the town of Tampaksiring, on main roads, and is accessible from anywhere on the island, and about 20 mins from Ubud.

The Pura Tirta Empul temple is dedicated to the Hindu god Vishnu who is worshipped as the creator of the universe and all the things in it. Tirta Empul means holy spring in Balinese and this is because it’s has a spring of holy clean water flowing through it.

At the temple, you’ll find baths full of this curative water which you can bathe in. People come from all over the planet to swim in these healing waters and see the beautiful temple.

The Pura Tirta Empul temple gets pretty busy so it’s worth trying to get there early. Sunrise is a great time to be there and bathe in the fresh cool holy spring water. 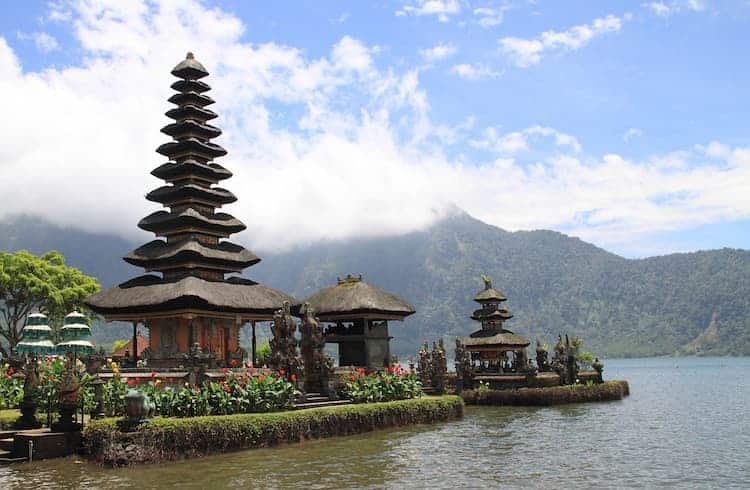 Ulun Danu Beratan Temple is one of the best temples in Bali not only thanks to the temple itself but also to its amazing location.

The Ulun Danu Beratan Temple sits around an hour’s drive from Ubud in the mountains around Bedugul, on the shoreline of Lake Bratan. The lake and temple are surrounded by mountains and the views across the lake onto the mountainsides are quite spectacular.

The Ulun Danu Beratan Temple was built in the 17th century to honor the lake goddess, Dewi Danu along with Brahma, Shiva, and Vishnu. It’s truly stunning and amazing to walk around.

Being so easy to get to and in such a beautiful location, the temple gets extremely busy with tourists and therefore it’s highly recommended to get there for sunrise. Not only will there be no crowds but usually there is a layer of fog sitting on the lake in the morning. Seeing the morning light break through it and onto the temple and lake is quite something to see.

You should also keep an eye on the weather as when the water rises in the Bratan River, the temple looks like it’s floating which is something not to be missed. 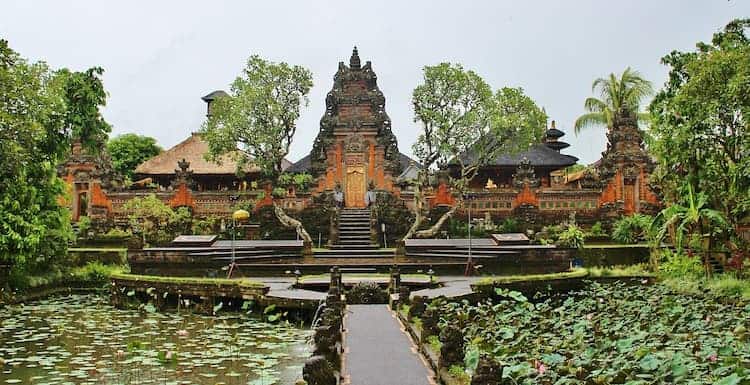 Pura Saraswati is quite a small temple but it’s incredibly beautiful and super easy to get so considering it’s in the middle of Ubud.

The Pura Saraswati temple is dedicated to Saraswati, the Hindu goddess of music, knowledge, wisdom, and arts and it’s decorated with her in mind. There are lotus ponds leading to the orange temple that is covered with thousands of artsy cravings.

Entrance to the temple is free and it’s a nice break from the busy streets of Ubud. You can also choose to go to the temple in the evening and see the traditional Balinese dance that happens daily, but there is a fee for this.

The Goa Gajah temple is also known as the Elephant and this is thought to be because it might have been dedicated to the Hindu God Ganesh that has the head of an elephant, and there was a stone statue of him inside the temple.

Inside, you’ll also find fragments of the remains of Yoni and her male counterpart Shiva, both a Hindu God and Goddess. There are also seven statues of women carrying water buckets that are said to resemble the seven holy rivers in India.

If you enjoy a little mission, you can wander out of Goa Gajah and down to Sungai Petanu through the paid fields to see the old rock carvings of stupas in a small cave and along a cliff face.

The Goa Gajah temple is incredibly easy to get to. You’ll find it in the little village of Bedulu which is just a 10-minute drive away from Ubud. If there is one temple to see in or near Ubud, it’s this one.

The Uluwatu temple sits right on the cliff face, looking southwest over the ocean. It’s about 70 meters up from the crashing waves and is known as Pura Luhur Uluwatu. The sunset from the temple is quite amazing, and it’s one of the best times to walk around it.

The Pura Luhur Uluwatu temple is surrounded by a beautiful forest full of long-tailed macaque monkeys which adds to the atmosphere. As you wander around the temple you’ll notice the stunning historical sculptures and architecture.

It’s believed that the powers of Sive, Vishnu, and Brahma – the Hindu Trinity, come together at the temple which makes it a popular place of worship of Siva Rudra, the Hindu god of all aspects of life and elements in the universe.

If you do end up visiting at sunset then it’s worth going to the open-air amphitheater down the road that has local dance performances at sunset on most days.

The Best Temples In Bali

I hope we have managed to whittle your list of temples in Bali to visit down from 20,000 to about 5 or 6. If you want to see a lot of temples, it pays to base yourself in Ubud for a few days as there are loads of them in the area.