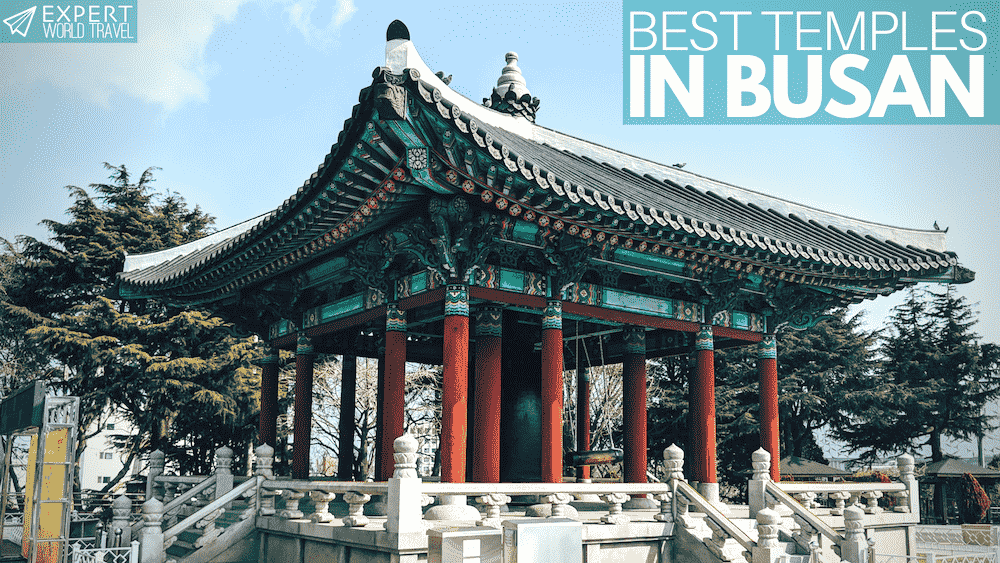 Each of the temples in Busan has its own vibe from amazing carvings of Buddhas to views across the sea and even mountainside retreats.

Now, visiting all 25 of the temples in Busan is possible but it might get a little repetitive, so here are the best temples in Busan that you should put at the top of your list on your visit.

The Beomeosa temple is the best temple in Busan to visit, as it really does have it all. The temple was built way back in 678 AD and was built to thank the gods after the area resisted an attack from the Japanese. It was built by order of King Munmu and was built with 360 dormitory rooms, to begin with.

It was almost destroyed by the Japanese during their invasion between 1592-1597. It was later restored in 1613 by local Monks who added the main hall and an extra entrance gate.

As you walk up the long stairs to the temple you’ll wander through 4 different entrance gates, each beautifully created in its own unique design. You’ll also see tablets and sculptures of turtles on your way up to the temple.

Once you’re up at the temple, you are in a completely peaceful environment totally removed from the buzz of busy Busan. The stunning scenery and beautiful architecture of the temple are what sets it apart from many others, plus it’s super easy to get to. It’s full of history and stunning details of Buddism.

The Beomeosa temple is the head site of the Jogye Order of Korean Buddhism and is the only one in the whole of Busan you can stay at. You’ll be able to chat to Korean monks who live there, get taught their meditation methods, and have a guided tour of the temple, and see a cool musical show.

Taejongsa temple sits on Yeongdo Island in Butan and is one of the best temples to visit in Busan simply due to its amazing location.

The Taejongsa temple is inside the Taejongdae Resort Park beautiful forested park that runs around the southern edge of Yeongdo Island. It’s covered in ancient trees and the views from the park across the sea are spectacular.

Taejongdae Resort Park is quite big and you can either choose to walk around the circuit or hop on a little train that takes you from stop to stop. The circuit is only just over 4km long, so walking is very possible but during the summer it can be very hot.

The Taejongsa temple is on the third stop of the train or towards the end of the circuit if you’re walking. Getting to the temple requires a 5-minute walk through the forest and when you arrive you’ll see the small temple draped in big beautiful trees.

The temple is home to 2 sacred fig trees that were donated by Sri Lanka and are a representation of the Bodhi tree where Buddha found enlightenment. There are also two Buddha relics inside the temple.

The great thing about visiting the temple is that you get to visit the rest of the park and see the amazing views and forest. 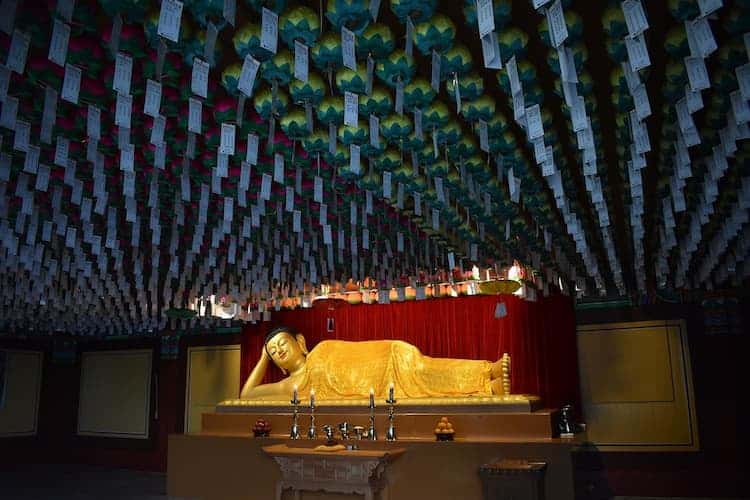 The Seonamasa temple in Busan sits to the north of Busan on Mt. Baekyang. The Seonamasa temple is surrounded by a beautiful forest with a stream flowing past on one side. It’s an incredibly peaceful place and the perfect spot to sit down, take a break, reflect and meditate into the sound of the stream flowing by. Plus, not many people make the trek to the temple, so it’s not busy at all.

The Seonamasa temple is built on three levels. After walking up the stairs you’ll arrive at the main hall. From there you can move up to the second level where you’ll find a few more halls for reflection and mediation, it feels very connected to nature thanks to the forest being amongst the buildings. The third level is home t a stunning shrine and gives you a view into the canopy of the forest.

Getting to the Seonamasa temple is not possible by public transport and you’re best off getting a taxi. Don’t let the taxi leave though, as you’ll need it to get home again, and hailing one from near the temple is not going to happen.

Daegaksa Temple is one of the only temples that you’re going to find in town and not in nature. This might take away from the serenity of the experience but it’s very easy to slot into a day exploring Busan. Plus, stepping out of the hectic traffic and commuters on the street into a peaceful little urban oasis makes it quite a special experience.

The Daegaksa Temple sits in between Yongdusan Park and the biggest traditional market in South Korea, Gukje Market, both of which are things you must see in Busan. So go before or after seeing the Daegaksa Temple.

The Daegaksa Temple was built in the early 1900s while Korea was still a Japanese colony and you can still see some of the Japanese influences like the pagoda. The temple is pretty small and it only takes a could of minutes to visit and walk around.

The courtyard is covered in stunning lanterns which is a nice touch and it is an immensely peaceful place considering the location.

The Daegaksa Temple is super easy to get to all you need to do is get to Nampo subway station and then walk to the temple. The entrance is easy to miss so keep an eye out for it. 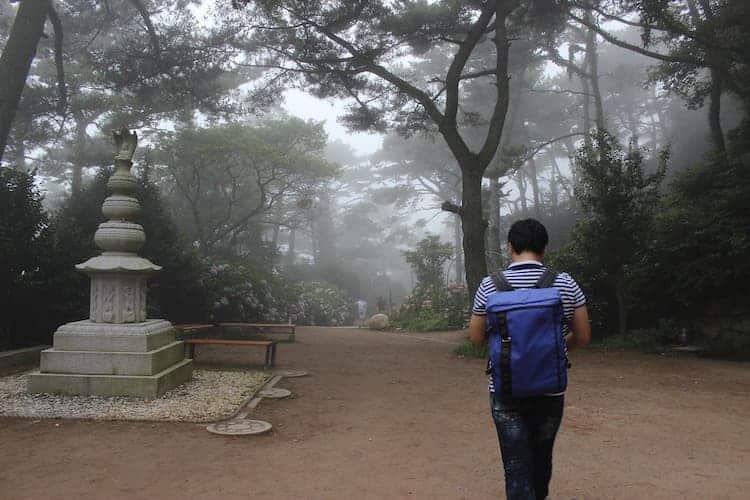 Samgwangsa Temple is one of the best temples in Busan to visit and probably the most famous as it plays host to the Lotus Lantern Festival in May on Buddhas birthday.

If you can time your visit with the festival you won’t be disappointed as seeing thousands of lanterns hanging across the temple grounds but it is incredibly busy. If you don’t like crowds it might be better to avoid the festival.

At an amazing 120,000 square meters in size, the Samgwangsa Temple is the largest temple in Busan. It was only built in 1983 so it’s not too old but it is part of the Cheontae Order of Korean Buddhism making it quite important in the Buddist circles of South Korea.

One of the temple’s most iconic features is the Daebo Tower, the largest pagoda of its style in the whole of Asia. It has 9 tiers and is covered with carvings of Buddhas.

Another thing that makes the temple quite amazing to visit is that it sits on Mt. Baekyang in the middle of Busan and overlooks the city.

The best way to get to the Samgwangsa Temple. You can take a bus but it’s a little tricky finding all the stops.

The Haedong Yonggungsa Temple is one of the best temples in Busan to visit simply because of its location. You’ll find the Haedong Yonggungsa Temple in north Busna on the rocks right by the sea. The views over the ocean are quite stunning and listening to the waves crash onto the rocks is a pretty fantastic sound to have accompanying you while you walk around the temple.

One feature that everyone loves is the Sunrise Platform at the temple. It faces directly to the east and it’s a fantastic place to watch the sun come up from over the sea. Traditionally, people come to watch the sunrise on New Year’s day, but you can do it on any day you like.

Visiting the temple for sunrise is a great idea if you want to avoid the crowds that collect at the temple pretty much daily.

The temple is backed by forest and surrounded by rugged rocks. There are a few halls to walk around and there are some wonderful carvings that are worth having a good look at. Without the crowds it’s a very peaceful place and whilst you’re there you should walk along the coast a bit and enjoy the stunning coastline.

It takes just 20 minutes to get to the temple by taxi and this is the best way to get there if you’re going for sunrise. Otherwise, you can take a bus which takes an hour or so.

The Best Temples In Busan

As you can see, there are some quite incredible temples to visit in Busan, all of which are very easy to get to and take you away from the busy streets and into a super peaceful atmosphere.