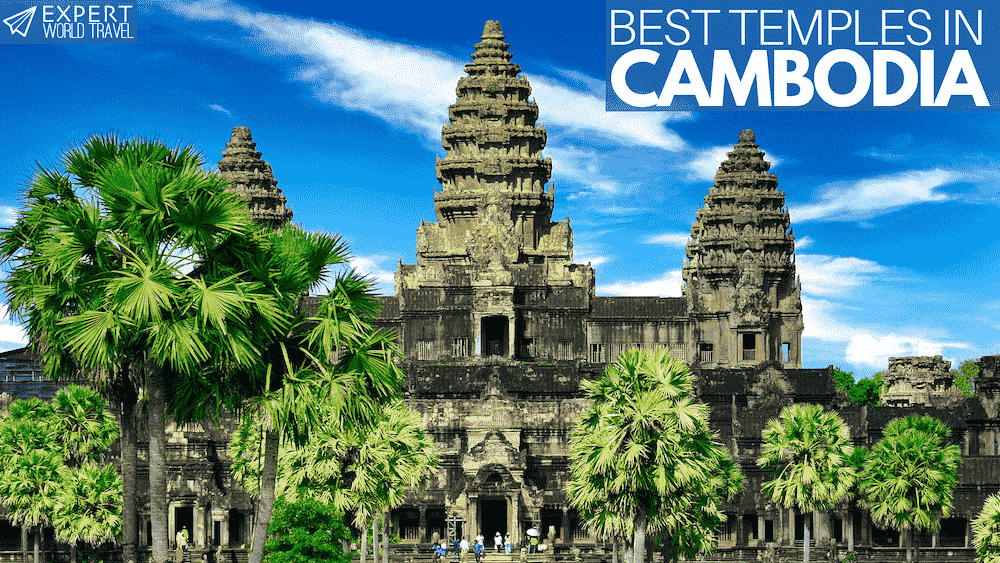 Tucked in between Thailand and Vietnam, Cambodia is a stunning country in southeast Asia that has only been growing in popularity in terms of tourism. The beautiful mountains, jungles, beaches, and ocean are just some of the amazing things that are attracting more and more visitors to Cambodia every year.

Cambodia is also known for its amazing temples, of which there are around 4000. Now, no one has the time to see all 4000 temples in Cambodia on a trip, even in a lifetime. Instead of wondering which temples are worth visiting, here are the best temples in Cambodia to spend time at while you’re there. 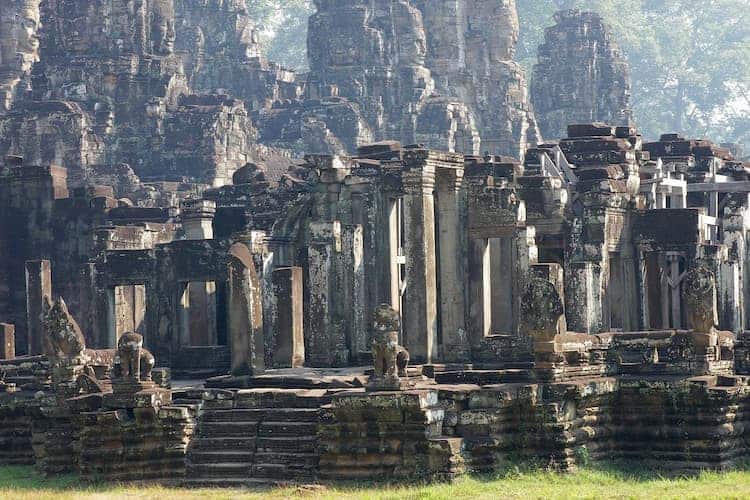 You’ll find Angkor Wat in northwest Cambodia just near Tonle Sap lake. It’s the largest temple and religious complex in the entire world and its grounds encompass 162.6 hectares. The temple sits within a moat that is around 5kms long and within an outer wall that stretches 3.6 km.

The Angkor Wat temple was built way back in the early 1100s during the Angkor Empire under the orders of King Suryavarman II. It was originally designed to be a personal mausoleum for the King and was dedicated to the Hindu god Vishnu. Towards the end of the 12th century, the temple was converted to a Buddhist Temple.

The architecture of Angkor Wat was built to represent Mount Meru, the home of Devas, and the Buddhist universe, the house of gods. There are three levels to the temple, carved into the walls are apsara figures dancing, and statues of Buddha and Devas.

It’s a very popular place to visit and is a large part of the country’s pride, so much so, it’s even on their flag. Entrance to the temple for a day costs around $37 US dollars and it’s open from 5 am so you can be there for sunrise and beat the crowds.

Koh Ker is an ancient temple in Cambodia that sits a little to the east of Angkor Wat. It’s a mission to get to as it sits way in the jungle away from civilization. You’re not going to get there without your own car or a taxi, and it’ll probably take you a while along a very bumpy ride.

Koh Ker sits in a protected area of 81 square kilometers and within the site, you’ll find over 180 different sanctuaries. Not all of them can be visited as they are still deep in the jungle and finding them, even getting to them, is not possible plus the area is not fully cleared of land mines yet.

There are around 24 sites you can visit at Koh Ker temple, each draped in the jungle and oozing history. But why is it there and why was it left behind? Koh Ker was the capital of the Angkor Empire during 928-944AD and it was built for worshipping Treypuvanesvara, the god of happiness.

Within Koh Ker, one of the best temples to see is Prasat Thom. It sits tall and looks a bit like a Mayan temple in its pyramidical shape. The stones are green and alive from the jungle’s attempt to take over. You can walk to the top of it too and see great views of the canopy.

Entry costs $10 and you can spend a lot of time wandering around the ruins and you’ll find a lot more than just temples. You can freely hop around and get up close to everything, if there was ever a place to play Indiana Jones, it’s at Koh Ker. 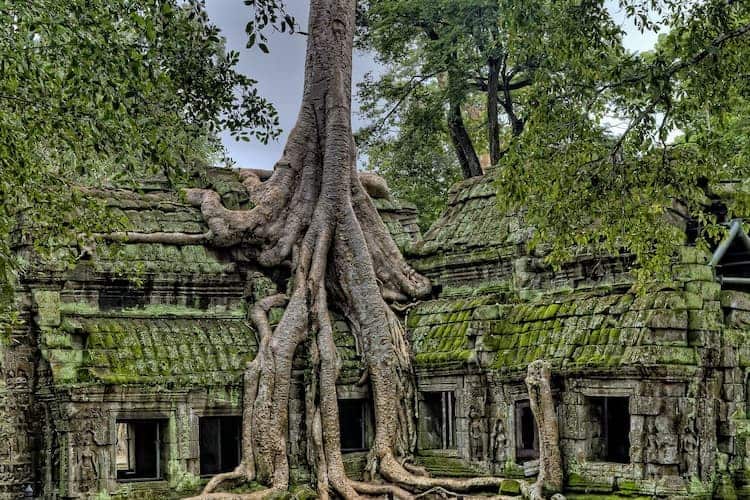 Ta Prohm temple is just next to Angkor Wat, and it’s included with the same $35 dollar day fee so if you’re going to Angkor Wat be sure to take a look at Ta Prohm.

Ta Prohm was built way back in 1186 and was made in a Bayon style of the late 12th century. It was originally named Rajavihara and was founded by Khmer King Jayavarman VII and was originally designed as a Mahayana Buddhist university and monastery.

Unlike a lot of the other temples in Cambodia, Ta Prohm has pretty much been left as it was discovered, intertwined with the jungle. It was thought that Ta Prohm was separate enough from the jungle but the jungle was a part of it, and leaving it that way was a great decision.

The temple is covered with trees, jungle and is absolutely beautiful, so much so, it became a UNESCO World Heritage Site in 1992. Tree roots thread through the ancient ruins and it has so much rustic appeal that it was used in the film Tomb Raider starring Angelina Jolie in 2001.

It’s one of the most popular temples in the country so try to be there early to avoid the crowds. Walking around it is easy as the paths are all well laid out and maintained. The temple opens at 7:30 am, so it’s worth heading to Angkor Wat beforehand.

Another temple in Cambodia that is included with the entry ticket to Angkor Wat is the Bayon temple. It’s a stunningly decorated Hindu/Khmer Buddhist temple that was also built in the 12the century by King Jayavarman VII to be his state temple.

After King Jayavarman VII died, the temple was then changed by the Hindu and Buddist Kings that followed to match their own religious beliefs.

Walking around the temple, you can not help but notice the huge numbers of structures and smiling faces that are carved into and sit on a lot of the towers. There are close to 200 faces and 50 pillars at the temple and faces are said to be associated with Buddha and/or the Hindu God Brahma due to the god’s 4 faces that look in multiple directions.

It’s an incredible temple to walk around. The size of the pillars and carved faces is something to behold. It does get extremely busy as it’s a super popular temple with amazing opportunities for amazing photos.

The Bayon temple opens at 7:30 am and it pays to get there early so you can walk around it in peace without too many people.

Sambor Prei Kuk is only accessible by car and it takes about 2 hours to get to from Siem Reap. The Sambor Prei Kuk temple dates back way before the Angkor Empire all the way to the mid 6th and early 7th centuries. It was a part of the Pre-Angkorian Chenla Kingdom and was built by king Isanavarman I to be a royal sanctuary and Isanapura, the capital of the time.

It was made a UNESCO World Heritage Site in 2017 and you can see why when you get there. The tall sandstone structures are covered in vines and greenery and the setting couldn’t be more peaceful. Tucked away in its own slice of paradise jungle, you’ll notice the amazing carvings in the sandstone walls.

If crowds aren’t your thing, then Sambor Prei Kuk is a great choice. It’s off the beaten track, not busy in any way, and visiting it is a very peaceful experience. While it is a drive away, it’s kind of on the route between the capital of Cambodia, Phnom Penh, and Siem Reap.

Entrance costs just $10 and you can hire a local guide to show you around for just $6. It’s worth the $6 as you’ll get to learn a lot more about the temple than you would by walking around it without one.

Banteay Srei aka “The Pink Temple” is another temple that can be found in the Angkor complex but a little more to the northeast of the grounds of the old capitals of Angkor Thom and Yasodharapura.

The Banteay Srei is made of red stone making it a beautiful color and the stone was used because it’s very easy to carve into. You’ll notice the walls are full of carvings and it’s known as a jewel or precious gem of Khmer art.

The temple was built in the late 10th century to honor Shiva, the Hindu God of Destruction, Meditation, Yoga, Time, and Dance. Banteay Srei translates directly to ‘Citadel of the Women,’ and it’s thought that it was built by women as they are generally better at carving delicately thanks to their smaller hands.

The Banteay Srei temple was lost in the jungle until it was discovered by the French in 1914 after which it was restored so that visitors could come and see it. 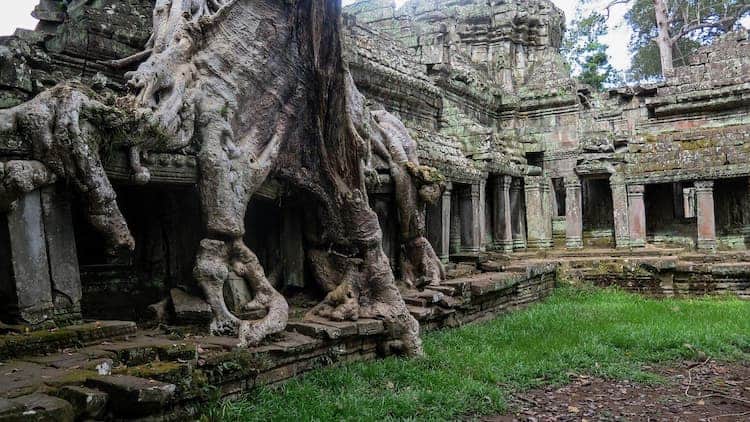 Seeing The Temples Of Cambodia

As you have probably noticed, a lot of the best temples in Cambodia all sit within the Angkor Archaeological Site. This makes seeing a lot of them extremely convenient as it’s just one pitstop during your travels in Cambodia.