Spain is famous for sunny beaches, tapas, and lively traditional festivals. But if you take a closer look at the Iberian Penisula, you’ll find some hidden surprises like the majestic mountains of the northern Pyrenees, Europe’s most southerly ski resort in the Sierra Nevadas, Cabo de Gata in Almería, mainland Europe’s only desert, and… stunning waterfalls.

If you like to chase the planet’s most beautiful waterfalls, Spain deserves a place on your travel itinerary. The mountains, rivers, and streams of Spain are the sources of the world’s most splendid waterfalls, especially after the spring thaw. Here are 9 of the best waterfalls to visit while traveling in Spain. 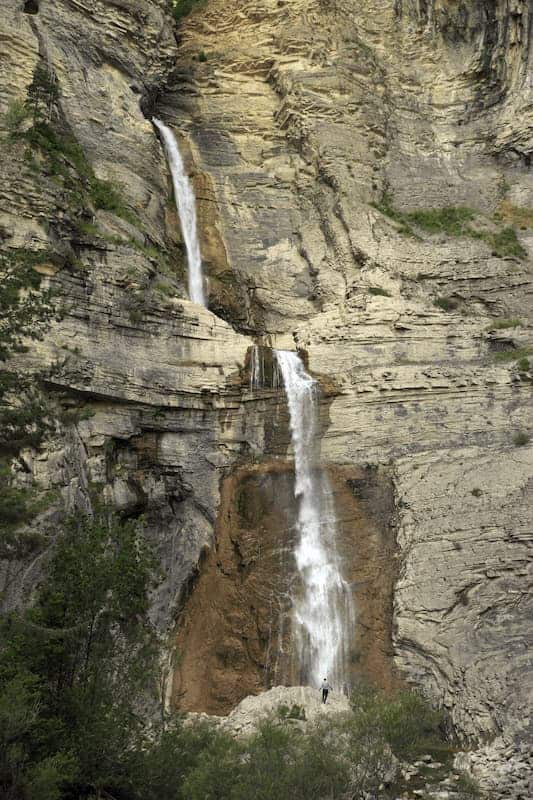 Not all of the many waterfalls in Spain slow their flow in summer. The increased pressure from melting snow feeds the river Barranco and speeds the flow of Cascada de Sorrosal. Cascada is the Spanish word for a waterfall that cascades over rocks and often has varying tiers. Cascada de Sorrosal is found in the province of Huesca in Northeastern Spain.

The water from this best waterfall in Spain flows from a height of 120 meters. The rocks aren’t very slippery, so you can climb the cliff for a vista of the lovely town of Broto below.

Parking is spacious, and there are restaurants, toilets, and a play area near the falls. Go during the spring or summer when the snowcaps and glaciers meltdown and increase the flow.

Salto also means waterfall in Spanish. This type of waterfall falls freely and barely touches the wall underneath. You’ll find the Salto del Nervion, one of Spain’s most spectacular wonders, on the border of the provinces of Alava and Burgos at Mount Santiago. It’s the tallest waterfall in the country and comes crashing down from an altitude of 220 meters.

You can see this beautiful waterfall in two different ways, from the top or from the bottom. The most popular way is from the top as there are several car parks with signed walks. To see it from the base, you must walk from the nearby town of Delika.

The Salt de Sallent Waterfall is located in Barcelona’s Rupit region. At nearly 100 meters high, it’s the tallest and most dramatic waterfall in Catalonia. An adventurous trail and view from the top make it special for tourists. The trail begins in the Medieval village of Rupit near the ancient brick bridge.

Along the way, you’ll pass by huge boulders and the hermitages of Sant Joan de Fàbregues and Santa Magdalena. You’ll reach the falls in about an hour. The trail ends where the falls begin. Another option is to drive to the top but depends on the weather and water flow. The best time to visit is during the early spring or fall. In summer, the water tends to dry fast. 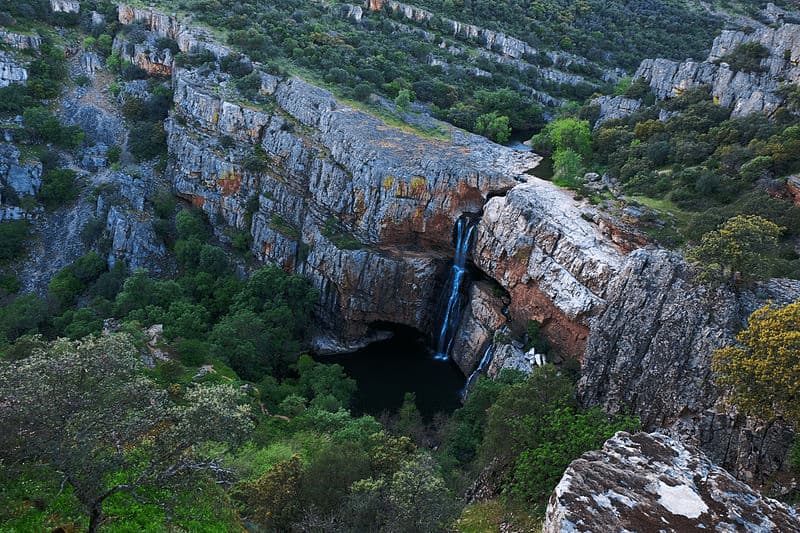 This stunning waterfall is just outside the town of Aldeaquemada in the province of Jaén, Andalusia. Originating from the Guarrizas River, the Cimbara waterfall is around 40 meters high. The cascading waterfall drops into a huge pool of water below. Swimming isn’t recommended because it’s so deep the exact depth has never been measured.

The Salto del Nervión is one of the highest free-falling waterfalls in Spain at somewhere between 220-270m in height. It spews out of the rock and then falls like crazy to the ground below.

The popular Cascada de Ezaro is one of the most beautiful and powerful waterfalls in Spain. Visited by throngs of tourists each year, this one-of-a-kind waterfall leads directly to the sea. Visitors can enjoy the sandy Carnota Beach only eight minutes away.

You’ll find this tranquil and calming waterfall in the province of La Coruna where it crashes against the walls of a canyon in Mount Pindo from 40 meters above. It also forms the Xallas river that flows straight ahead for 155 meters. Its layered structure makes it an excellent place to begin your vacation in Spain.

The Cascada de Colores are not surprisingly the most colorful waterfalls in Spain!

Unfortunately for you, the Cascada de Colores is right in the center of La Palma island in the Canary Islands of Spain. At the moment it is or has just undergone severe eruptions of its volcano, so we are not sure that this stunning waterfall is still there.

However, in the past, it was a popular hike that led to these beautiful waterfalls that are backed by colorful rocks, which are a result of the algae from the hot springs.

The spectacular Cascada de la Osera is located in the Andalusia region of hills bordering the southern coast. It lies within the gorgeous Natural Park of the Sierras de Cazorla, Segura, and the Villas. It falls at 130 meters making it the highest waterfall in the region and the second-highest in all of Spain.

Cascada de la Osera is one of the harder waterfalls in Spain to reach. It’s a little over an eight-kilometer hike and takes around 4.5 hours. It’s not a hike for children or the inexperienced, but the reward is great views and smaller waterfalls along the way.

Cascada de Ronda has unique features and a special history that has earned it international recognition. Located in the Malaga province, it’s where you’ll find the famous Puente Nuevo completed in 1793.

The continuing erosion of the Guadalevin River gives this waterfall a rustic hue. Combine your visit to Cascada de Ronda with a tour of the historic city of Ronda where traditional Spanish bullfighting was born. 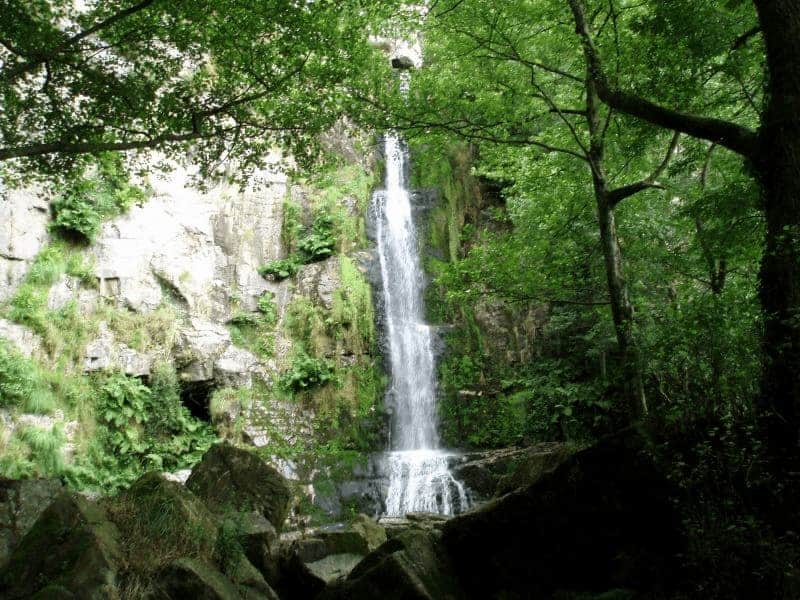 This waterfall is actually an ensemble of three spectacular waterfalls, the Cascadas la Fibra, La Ulloa, and the Cascada de Maseirua. The waterfalls are fed by the river Rio de Oneta. The first waterfall is the most breathtaking with its drop of 20 meters.

The second and third waterfalls are more difficult to get to because of the thick foliage and trails with slippery rocks. The water flows year-round, but the spring rainy season is when the falls are the most dramatic.

The Cascada Cola de Caballo waterfall can be experienced with a visit to the lush Spanish national park of Ordesa and Monte Perdido in the province of Zaragoza. At a fall of 54 meters, it’s one of the highest waterfalls in Spain. Cola de Caballo means “horsetail” in Spanish, and the waterfall is so-named for its resemblance to a horse’s tail.

Visitors also come to this area to explore the cave Gruta Iris at the bottom as well as the beautiful surrounding national park and the monastery Monasterio de Piedra The area also features a myriad of other waterfalls of different shapes. The falls are generated by the Piedra River.