Iceland’s black sand beaches are one of the top things tourists want to see while visiting Iceland these days and for good reason.

Now, these beautiful black sand beaches aren’t the kind of beaches you rock up to with a towel to sunbathe on and once toasted have a quick dip to cool off. You go to an Icelandic black sand beach for the jaw-dropping views that await you and the dramatic coastal sevener that goes with them.

Join me as we take a look at the best black sand beaches in Iceland that you should take some time to see while in this beautiful country. 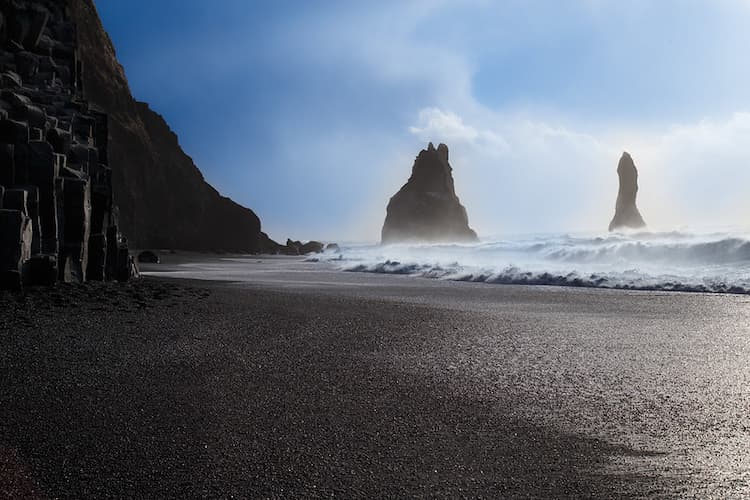 Reynisfjara beach sits near the quaint village of Vik and features unique basalt sea stacks and basalt columns. Reynisfjara beach was made famous after being the filming location in a few of the scenes of Game Of Thrones, Star Trek, and Star Wars, and is thus one of the most popular black sand beaches in Iceland.

You’ll find two giant basalt stacks that lead to the amazing basalt columns and legend has it that stacks were made by two trolls. The trolls were supposedly dragging a ship to shore when the sun rose out and turned them to stone.

It’s not just the scenery that makes Reynisfjara so great, it’s also the wildlife that lives amongst the columns which include fulmars, puffins, and guillemots. You really can’t beat hanging out at this amazing black sand beach. 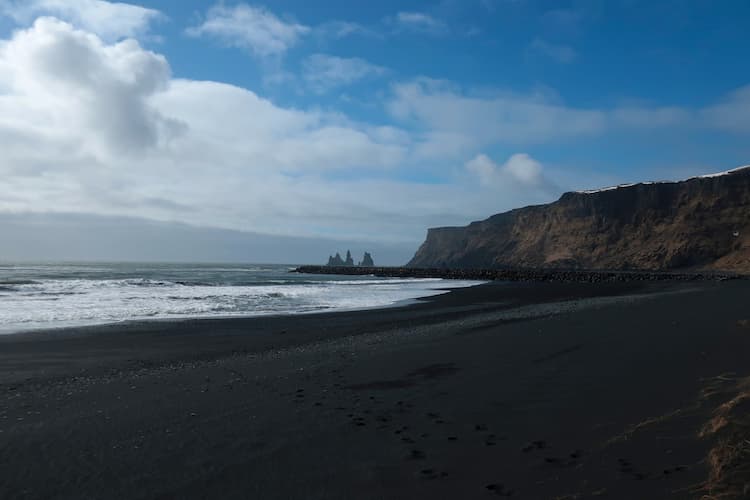 Vik black sand beach is also on the south coast of Iceland and is even closer to the small village of Vik than Reynisfjara. In fact, there is a stunning view of Reynisfjara and it is worth passing by so you can see both black beaches in one single trip.

As far as black beaches go, this black sand beach is pounded by the Atlantic ocean and is one of the most dramatic beaches you can stand on in south Iceland. To the right of the beach, you have towering cliffs covered in green that seem to just go on forever and you can see some great sea stacks to the west as well.

At high tide, the black beach at Vik pretty much completely disappears and you just have the sea and a land of green surrounding it.

The town of Vik actually comes right down to the black beach and at low tide, the color changes between the very blue ocean, green cliffs, and the black sand make for some stunning pictures and magical views.

This black beach is around 2 hours from Iceland’s capital Reykjavik and most tours go there and you can of course go there if you have hired a car. 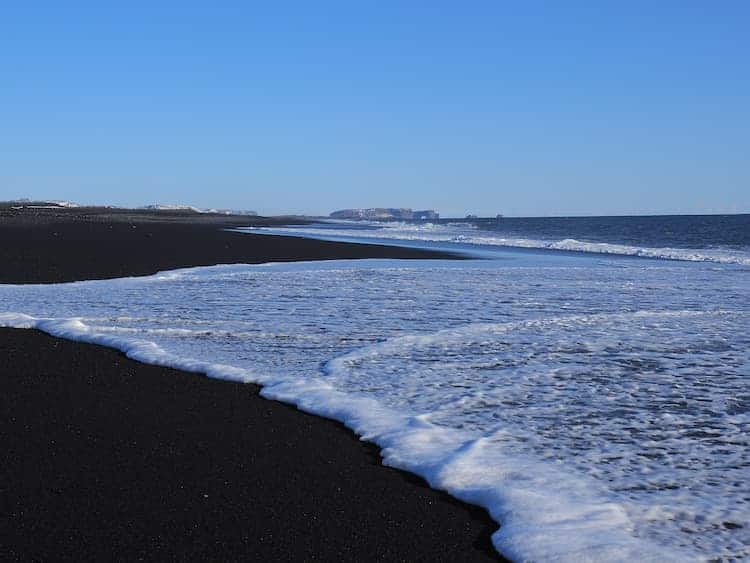 The black sand beach of Solheimasandur is also on the south coast of Iceland and it’s not far from Reynisfjara and the nearby village of Vik. This Icelandic black sand beach is particularly famous for having a plane wreck on it. The plane wreck has been there since the 1990s when a plane crashed on the black beach and it has been left there ever since.

While walking on this black beach in Iceland you can’t help but notice just how vast it is as the black sand seems to go on and on. You can actually walk right up to the plane wreck, walk around it and even go inside the plane wreck for a photo if you dare.

Just close by to this Icelandic black sand beach Skogafoss waterfall so you can see one of the best black sand beaches in Iceland and one of Iceland’s most beautiful waterfalls all in one day trip. 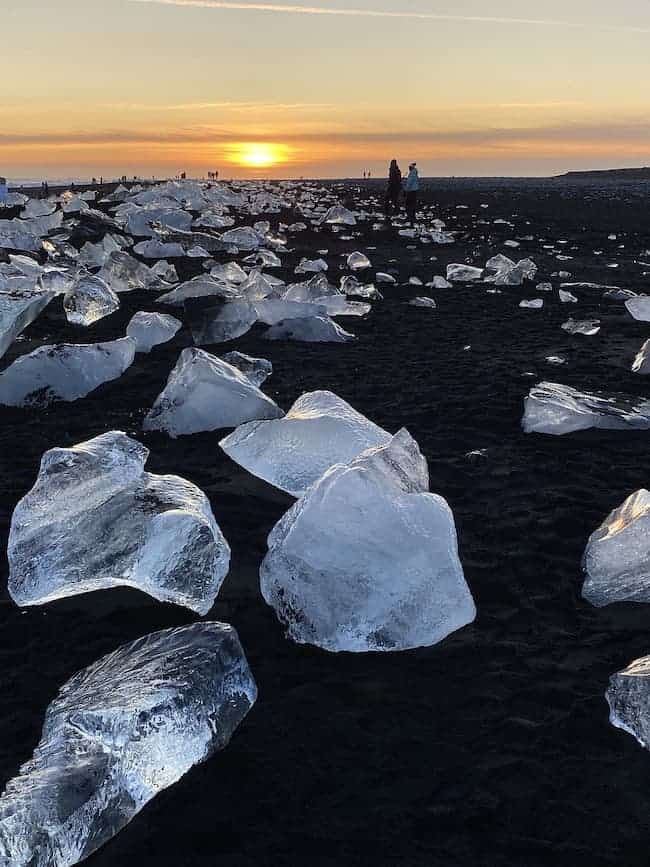 The Diamond Beach in Iceland is a black sand beach known for having what looks like huge diamonds on its shores, hence the name Diamond Beach.

You’ll find Diamond Beach in Iceland on the south coast of Iceland just near the Jokulsarlon glacier lagoon and it’s the glacial ice from the glacier that you will find in big ice chunks.

These big chunks of ice look just like diamonds, especially when laid up against the black sand of Diamond Beach and in the sun they shimmer in a way you won’t have seen anything shimmer before.

Another great thing about seeing Diamond beach is how photogenic it is. You’ll have the crystal blue waters of the lagoon on one side, Diamond beach in the middle, and you might even see seals basking on the shores and in the seawater just off the beach too. 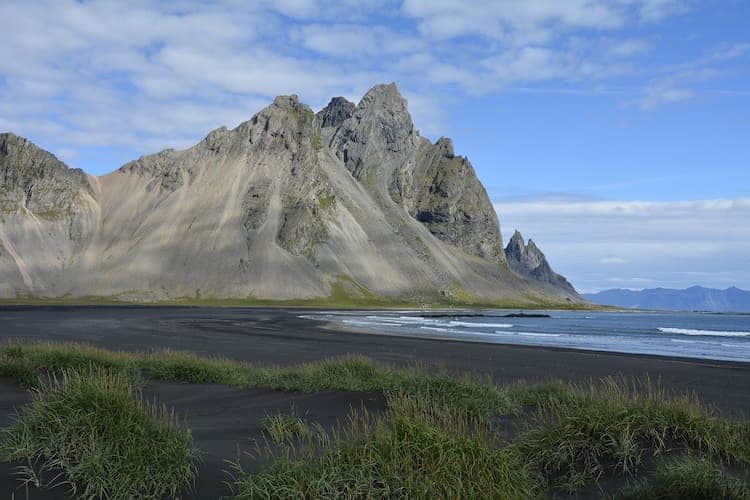 Stokksnes Beach is one of the famous black sand beaches in Iceland and you’ll find it located on the East Coast of Iceland and it’s a little bit of a hidden gem. It’s not that easily accessible as it’s quite a drive from the capital and takes about 6 hours to get there, but it’s worth the journey.

Stokksnes Beach has probably one of the most dramatic scenes of any of the black sand beaches in Iceland. Just behind this black beach in Iceland are gorgeous snow-covered mountains that just plummet into the sea along the shoreline.

The best place to see the beach from is the Stokksnes Peninsula as you can look back onto the black sand beach from it and get amazing photos of the black beach with the Vestrahorn Mountains in the background. 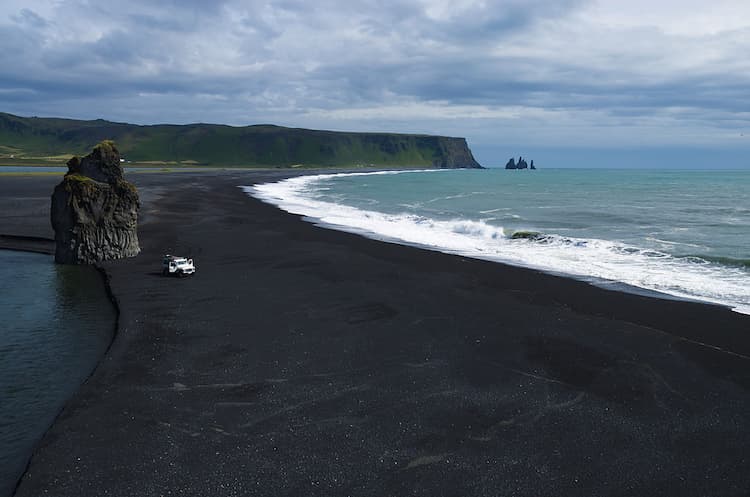 Dyrholaey​ is another of the black beaches in Iceland that is located on the south coast near the other beaches of Vik and Reynisfjara.

It’s easily accessible via the ring road that runs around the south and is a unique beach thanks to the arch featured in the headland and you won’t actually stand on the beach but rather view it from the rock called Dyrholaey​ above it.

You’re so high up on the rock that you can’t beat the view of the beautiful beach below as it offers a panoramic view that encapsulates everything. You’ll see it all, from the ocean to the cliffs and the beautiful background of the island of Iceland.

There is also a lighthouse just on the headland that is worth having a look at and you should keep an eye out for the puffins that nest there during the summertime.

Why Is The Sand Black In Iceland? 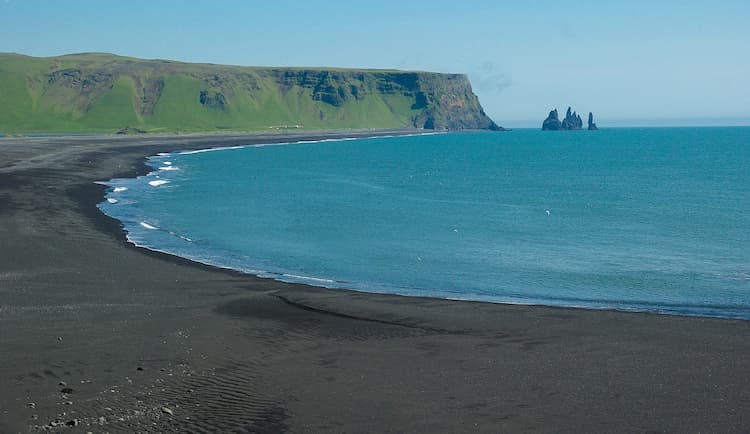 The beaches in Iceland have black sand due to the black volcanic rock that creates them called basalt. When hot lava makes its way to the beach it cools to create lava formations (basalt).

These basalt formations are then smashed into tiny fragments similar to volcanic ash by the violent waves, heavy rainfall, and gale-force winds that Iceland experiences quite often. As they have been eroded over thousands or millions of years, they have created Iceland’s beaches.

Since is black and once it’s eroded along the shores it creates black beaches instead of golden-colored ones that are made from other materials that do not come from lava.

Why Are Black Sand Beaches in Iceland Dangerous? 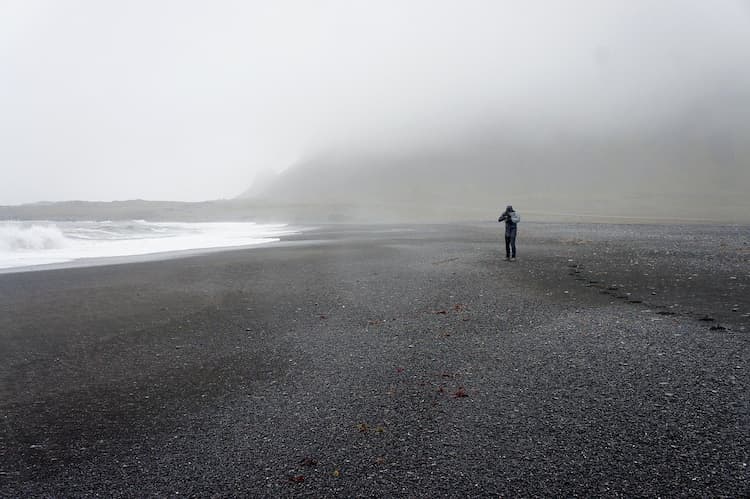 Unfortunately, Iceland’s beaches are some of the most dangerous beaches around and this is due to a multitude of reasons.

The first is due to powerful waves called sneaker waves and sneaker waves crash way further up on the shore than one could expect, and, the main issue with a sneaker wave is that it’s sneaky.

You can be on a stunning black lava pearl beach in Iceland enjoying the views on a very calm day and out of nowhere a huge wave can sweep you off the rocks or shore and take you out into the cold sea.

If you’re visiting the black beaches of this country during the winter, it’s not just the waves that will get you on Iceland’s black sand beaches, it’s the wind too. The wind will pick up all the sand and fire it at your face causing stings, cuts, and serious windburn too.

How Can I Get to the Black Sand Beaches in Iceland? 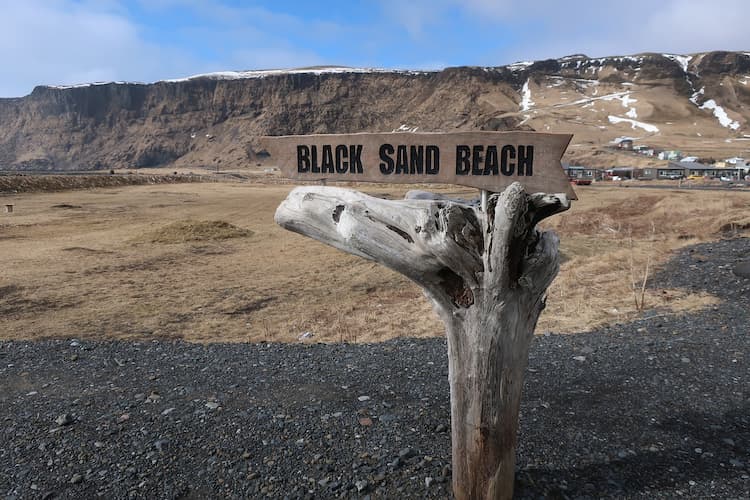 Getting to a black beach in Iceland isn’t so hard and most of the best beaches featured above are located on the ring road on the south of the island. In fact, three of the best beaches mentioned are actually so close to each other that you can do them in a single trip.

If you want to find a black beach in Iceland that is more off the beaten track, you’ll be traveling for quite a while as some of them are located way on the east and west coast, up to a 6-hour drive or more from the capital.

You can just drive onto the ring road and make the trip south and see all the beaches mentioned around Vik and then go further to the most spectacular beaches of Stokksnes and Diamond. It is advisable to camp out at the various campsites during the summer or find nice cabins to stay at in winter.

If you don’t want to hire a car while you’re in Iceland or if you can’t drive then you can find numerous tours you can join which will take you to some of the beaches closer to Reykjavik that I mentioned above, mainly those around Vik and one more that is just 10 minutes outside of the capital.

How to Stay Safe at the Black Sand Beaches in Iceland? 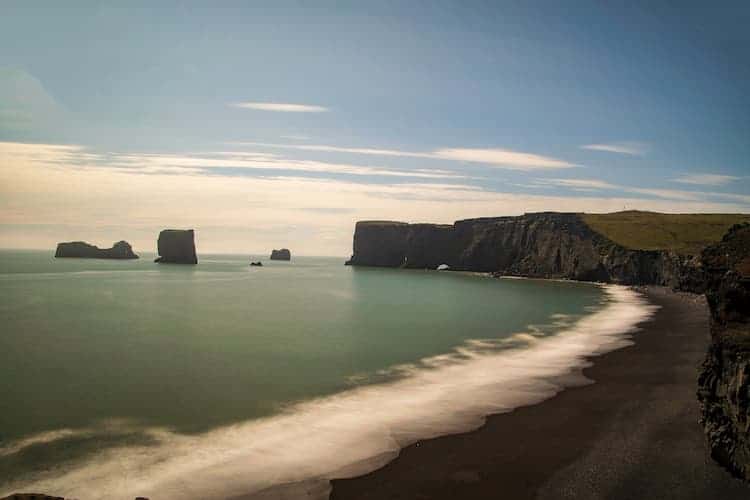 Staying safe at every black beach in Iceland is easy if you follow these safety tips. The first bit of advice you should follow is to keep a safe distance from the sea on every black sand beach Iceland has as this is how you will avoid the sneaky waves that can wash you out to sea. Make sure you’re 30 meters or 100 feet from the sea at all times.

Another thing you should never do is turn your back on the sea while on a black beach in Iceland as these waves can come out of nowhere and if you see it coming you’ll be far more prepared.

An obvious safety rule but one I have to mention is to not go swimming in the sea around these beaches as the currents are incredibly strong and can wash you out to sea. The water is also extremely cold and once you’re wet you will struggle to get warm again.

While at Diamond Beach, do not play around on the blocks of ice or try to climb the icebergs as they are very slippery and if you injure yourself, you are very far away from any kind of medical assistance.

Appropriate clothing is also very important while visiting the beaches in Iceland, particularly in the winter. Appropriate shoes such as waterproof shoes are highly recommended so that your feet don’t get wet and stay warm.

Also, temperatures in winter are extremely harsh and in strong winds, you will want a face covering as well as sunglasses to stop any sand from being blown into your eyes and damaging your face. It’s also advisable to avoid visiting the beaches during intense weather when the winds and waves are most powerful.