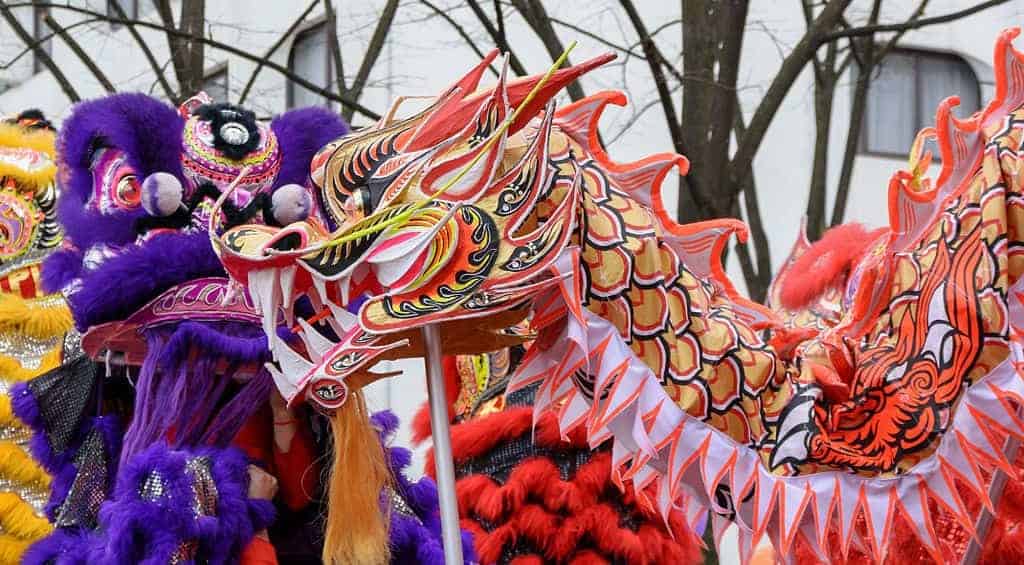 Traditional Lion Dances and Dragon Dances are an important part of many Chinese cultural and religious celebrations, especially at the Chinese New Year. The dances may also be performed at weddings, business openings, or other special occasions.

In the Lion Dance, dancers wear masks and costumes, and perform a dance that mimics the stylized movements of a lion. The costumes usually require two people, one in front and one in back, though there are also single-person costumes. The lion costumes are very fanciful. There are no native lions in China, so the appearance of the “lions” is based on a few specimens that were brought to China during the Han Dynasty. (Similar stylized shapes can be seen in the stone lion statues found throughout China.)

In many lion dances, a male and a female lion are represented in a kind of mating ritual. Other dances may involved lions playing with a large ball, or may simulate combat between lions.

The dances are very strenuous and athletic, and are usually performed by trained acrobats or martial artists.

Unlike the Lion Dance, the Dragon Dance does not involve masks or costumes. Instead, teams of dancers carry a long dragon on poles. By moving the poles, the dancers can make the dragon sway and weave. The dragon may be up to 30 meters in length, with dancers spaced every 1 to 2 yards.

Dragon dances are considered both athletic and artistic; there are major competitions for dragon dance troupes held in China, Hong Kong, Malaysia and Singapore.

When dragon dances are held at night, the dragon’s body may be made of fluorescent materials, or even illuminated from within by lanterns or candles.

Chinese dragons may appear fearsome, but have a benevolent disposition, and symbolize good fortune – making them particularly auspicious at the New Year.

Each year we provide a schedule of Chinese Lunar New Year Parades and Celebrations in major Chinatown communities. Many of these events offer a chance to see Dragon Dance troupes and Lion Dances.