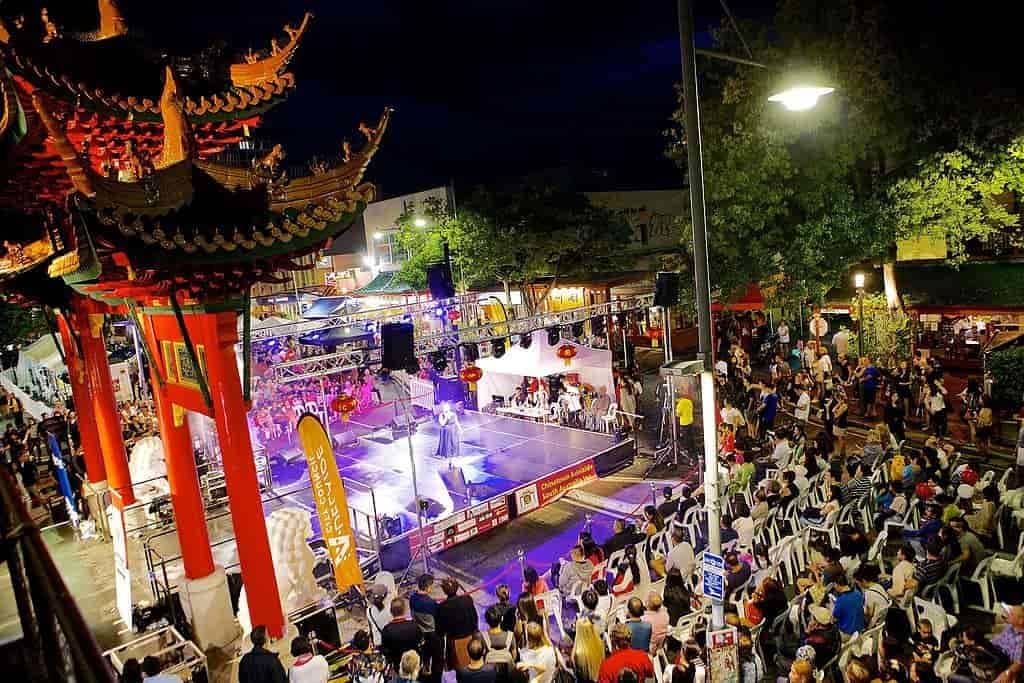 It begins the year 4717 on the Chinese calendar, the year of the pig.

Check back for information about Chinese New Year (also called the Lunar New Year) celebrations, parades, and fireworks in each of the cities below. We typically update this page in early January, but sometimes we don’t have information for specific cities until just a few weeks before the event.

Be sure to bookmark this page for next year!

Beach Street and other nearby streets in Chinatown

Festival along the streets of Maunakea, River, and Pauahi Streets; parade starts at Richards and Hotel Streets, and proceeds down Hotel to Smith Street.

Enjoy the food booths and the plethora of entertainment at 3 stages this year!

Parade starts at Merchant and Hotel Streets, and proceeds down Hotel to River Street.

The Golden Dragon Parade is the premiere Chinese cultural event in Southern California and draws over 100,000 spectators and participants. The parade has been an annual event since 1898.

A large stage will feature all-day cultural performances by traditional and contemporary Asian-American singers and dancers, as well as a firecracker explosion intended to ward off evil spirits.

Parade route: Mott & Canal to Chatham Square to East Broadway towards the Manhattan Bridge, completing on Eldridge and Forsyth Streets towards Grand Street next to Sara D. Roosevelt Park.

The parade features elaborate floats, marching bands, lion and dragon dancers, Asian musicians, and acrobats, with over 5,000 participants. There parade terminates at 3:00 pm in Sara D Roosevelt Park, where there will be additional performances.

Second and Market to Chinatown – see the Parade route. Please note that spectators begin to line up along the parade route several hours in advance.

The Chinese Chamber of Commerce has hosted a New Years Parade each year since 1958. The parade features over 100 floats and marching units, performers, firecrackers, and a 200-foot Chinese Dragon. It is the largest Chinese New Years celebration outside of Asia, and it has been named one of the top 100 parades in the world.

Celebrate the year of the pig by walking the night market full of vendors selling authentic food, fun beverages, and diverse products, such as gadgets, decorations and toys; all the while enjoying our cultural performers and a DJ to end the night.

Somerset Street from Preston to Bay

The King of Good Fortune will give away lucky red envelops with his best wishes to children whom he will meet in Chinatown. Among the red envelops there will be 108 special gifts from various Chinatown merchants for the even luckier winners!

Parade starts at the Gate of Harmonious Interest

The colorful Lion Dance Parade winds through Chinatown. This familiy-friendly event is hosted by the Chinese Consolidated Benevolent Association.

Main stage performances, featuring traditional Chinese dance and music shows, contemporary hip-hop acts and an exciting line-up of artists from China. Don’t miss the pyrotechnic display which lights up Trafalgar Square to mark the end of the festivities.

Here are a few of the more than 80 events that will celebrate the Chinese Lunar New Year.

Celebrate the Lunar New Year at City of Sydney’s Chinese New Year Festival. This vibrant arts Festival has a program bursting with cultural events, markets, tours, exhibitions and entertainment, most of them free. Be part of the fun as the city’s streets come alive with giant lunar lanterns and more.

Don’t miss the extremely popular Dragon Boat Races that see the spirit and power of the dragon come alive as 12-meter long boats, with up to 20 paddlers, battle it out to the beating of drums!

This is the biggest Dragon Boat Race in the southern hemisphere.

Other Events of Interest