Driving In Costa Rica – Know Before You Go

Costa Rica is heaven on earth in my opinion. Everything about it is fresh, alive, loving, and welcoming. It’s one of the few countries in the world that borders two oceans and is also full of mountains, rivers, rainforests, lakes, volcanoes, plus incredible bio-diversity.

The best way to experience all that Costa Rica has to offer is by driving. But, driving in Costa Rica is a little different from driving in the USA or the UK, and you’re going to want to know the rules of the road before you begin an epic road trip around this amazing country. 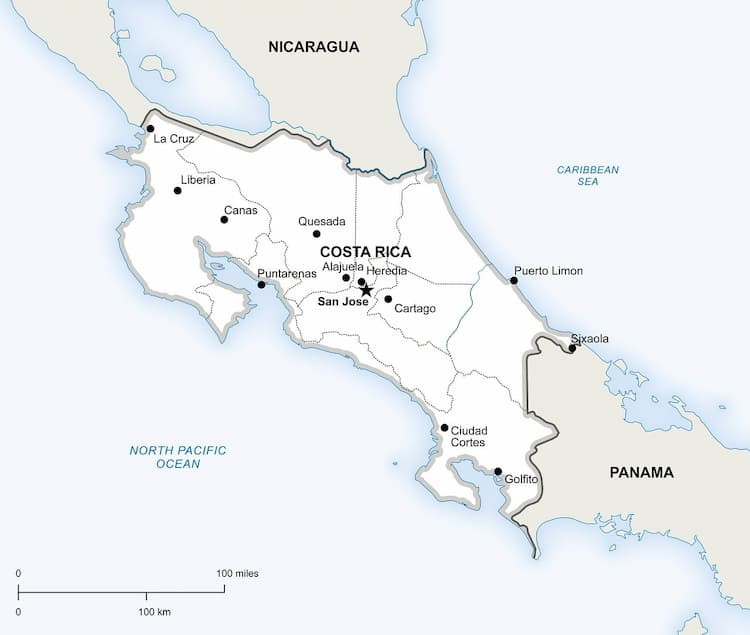 It’s pretty impossible to find a definitive list of the rules and regulations on the government website, particularly as it’s all in Spanish, but here is the link if you want to dive in further.

Overall, the rules for driving in Costa Rica are similar to those of the US and Canada, and here are the major ones to pay attention to.

The speed limits change depending on the roads you’re driving on in Costa Rica. They are in kilometers per hour, no miles per hour, and are shown on signs, although not all the time, so it’s best to know them.

The police are also quite sneaky and hide their speed checks well and if you’re caught, the fine is expensive.

When driving in Costa Rica, you’re going to notice that the local Tico’s don’t always follow the rules and they have their own way of driving around compared to drivers in the US, Canada, or the Uk. Here are some local laws and driving habits to be aware of.

In most places in the world, when you see a red traffic light you stop, and a stop sign you’d slow down to check if something is coming. Well, when driving in Costa Rica, you’re going to experience something else.

A red light is more of an indication to slow down, and if there is no traffic coming, nip across the junction to save those valuable few seconds. Stop signs are pretty much ignored and drivers tend to just continue on their way, perhaps slowing down a little bit.

If approaching traffic lights, be sure to slow down slowly, so the car behind realizes and slows down too. don’t be surprised if you’re suddenly overtaken when this happens. Try not to slow down at a green light if possible, as there will be a high chance of the car behind you bumping into your rear.

Overtaking Lanes Aren’t What They Seem

If driving in or out of any of the major cities, you’re going to end up on two-lane highways. The right lane is for driving on and the left for overtaking, but in reality, this is not the case and it’s used as a two-lane road.

Chances are you’re going to get stuck behind a slow truck and have another one sitting at 50 km/h in the left lane, so how do you overtake? You’re going to have to dodge and weave between lanes if you want to get head and overtake traffic on two-lane highways.

Costa Rica’s roads are mainly single-laned and are often windy to get around all the mountainsides. Opportunities to overtake don’t come that often, and you should be sure that’s nothing is coming before you commit to it.

Something to look out for when overtaking is that the car behind you will probably have the same idea and will pay no attention to your indicator light and try to double overtake if they can. Use your mirrors and make sure the car behind is behaving before you make your move. 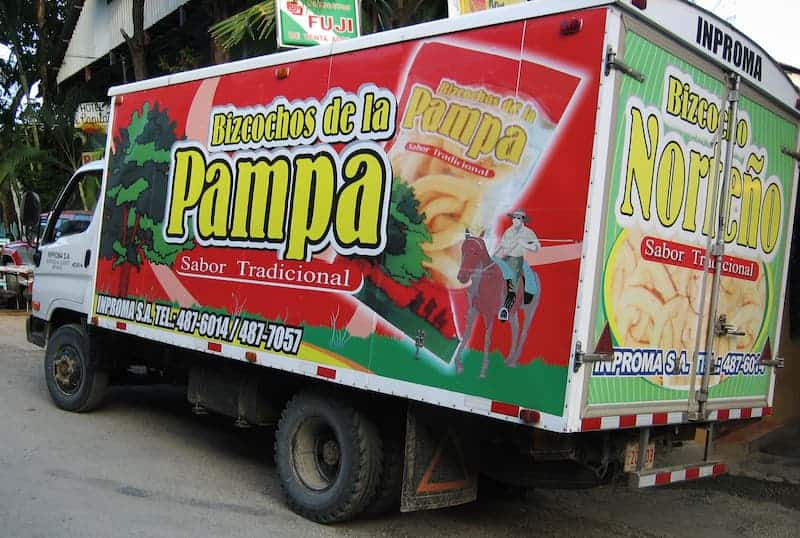 Signs Are Often From The Past

While driving around Costa Rica, it’s best not to take some of the signs too literally. All over the country are signs stating that bridges are not working or being fixed, lanes are not available, and there are hazards ahead, but these are often signs left there after the work has been completed or the hazard has been removed.

When you see signs like this, proceed with caution, but don’t be surprised if whatever the sign was indicating isn’t actually the current situation.

Arrows On Signs Don’t Mean Much

If you’re trying to used road signs for directions, you might run into a bit of trouble. An arrow on a sign can be pointing in any direction but still mean that the destination is straight on, or left, or right, so it’s best not to depend on these for directions.

Flashing Blue And Red Lights Are The Norm

That feeling when your heart sinks because you have a police car flashing its light behind you is something no driver likes to experience, and when it happens in Costa Rica, you’ve probably missed a speed sign, that wasn’t there, and broken the limit unknowingly.

But, most of the time, it’s actually nothing. All police cars and ambulances tend to drive with their flashing red and blue lights on, even if there isn’t an emergency or the need to pull you over, so don’t panic if this happens.

Flashing Headlights – What Do They Mean?

If a vehicle passes you and flashes its headlights, they are not being friendly and saying hello, they are warning you of something and you should slow down.

Flashing headlights is almost always an indication of a speed trap or hazard such as a landslide or accident ahead, and you should proceed with caution.

Why Are There Sticks And Branches In The Road?

If you see sticks and branches in the road, then you have stumbled upon the Costa Rican version of a road flare. These are laid in the road to indicate a hazard ahead and you should slow down immediately.

By hazard, it could be an accident ahead or the end of a road with a cliff at the end, so take these local road flares seriously.

When parking in cities, you should only leave your car in well-lit areas at night, ensuring the doors are locked and nothing of any value is out to tempt passers-by. Your best bet is to park the car off the street where you’re staying, as it will be safest there.

When parking in rural areas, you can pretty much pull in anywhere on the roadside, but still, make sure you park at home when the nighttime comes.

If you’re driving in any major city in Costa Rica, make sure your doors are locked, and if in downtown San Jose, your windows are up. Incidents are rare, but if your windows are down, you’re an easy target and you never know when someone might try their luck. 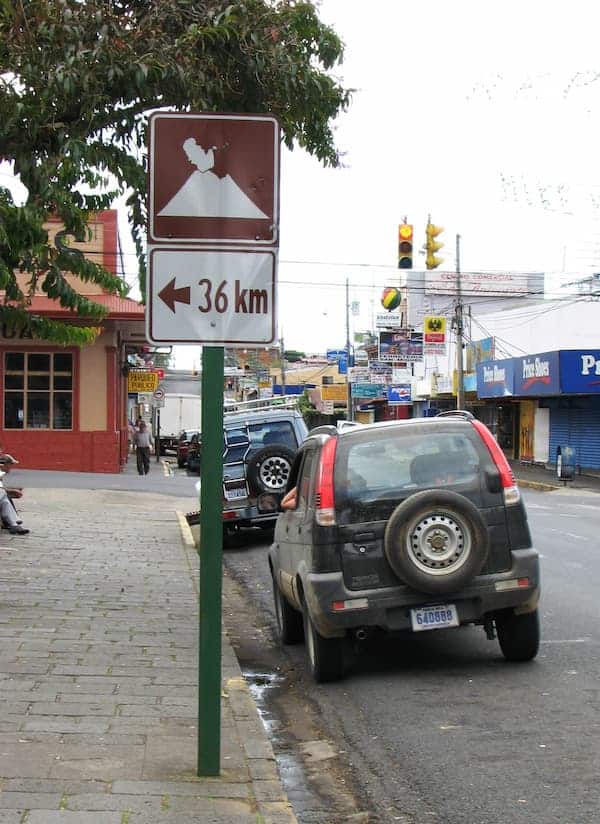 Road conditions vary quite a lot in Costa Rica. The major cities like San Jose and Liberia have well-maintained paved roads and great paved highways connecting them. Once you get into rural areas, the paved roads turn to into dirt roads and if traveling far, you may experience a river crossing or two.

Do You Need A 4wd For Driving in Costa Rica?

If you want to explore the country fully, then yes, a 4wd vehicle is needed. River crossings are not possible without one and if you want to visit areas like Monte Verde or the Nicoya Peninsular, then you’ll be driving on bumpy dirt roads most of the time.

Some of the highways leaving and entering San Jose are toll roads and must be paid in cash. It’s recommended to use colones, the local currency, but US dollars are also accepted. You will get your change back in colones though, so be sure to use small US bills.

Tolls are usually between the 200 and 800 colones range, which is around $1-2 USD, so giving a $50 note and getting your change back in colones isn’t great, especially if you’re on the way to get your flight home.

You’ll know tolls are ahead when you see the sign “Peaje”. Once you arrive at a toll there will be a sign indicating the prices for each vehicle type.

Renting A Car In Costa Rica

Renting a car in Costa Rica is easy and there are global brands that you can trust with offices all over the country.  I always go with Enterprise/Alamo as they are the most reliable in my experience and don’t ask for a huge deposit.

If you’re planning on renting a car in San Jose and dropping it off where to plan to stay, then make sure the company you choose has offices nearby. This is by far one of the most fun and reliable ways to get to where you’re going and can be more reliable than an internal flight.

What Do You Need To Rent A Car In Costa Rica?

To rent a car in Costa Rica you need to be between 21-25 years old, depending on the hire company, have an international or driving license from your country of residence, and your passport with your visa stamp. You can only rent a car for as long as you can stay in Costa Rica which is 90 days for Uk, US, and Canadian residents.

When it comes to car hire and insurance, Costa Rica makes it about as complicated as it gets. It is mandatory to get 3rd party liability insurance with your rental but that is it, but it does leave you exposed and the car hire companies do not like it.

Your best way around it, from an exposure and cost perspective, is to buy excess car hire insurance separately from a company like this. This will cover everything you need to drive insured and only costs $70 a year for a global cover. 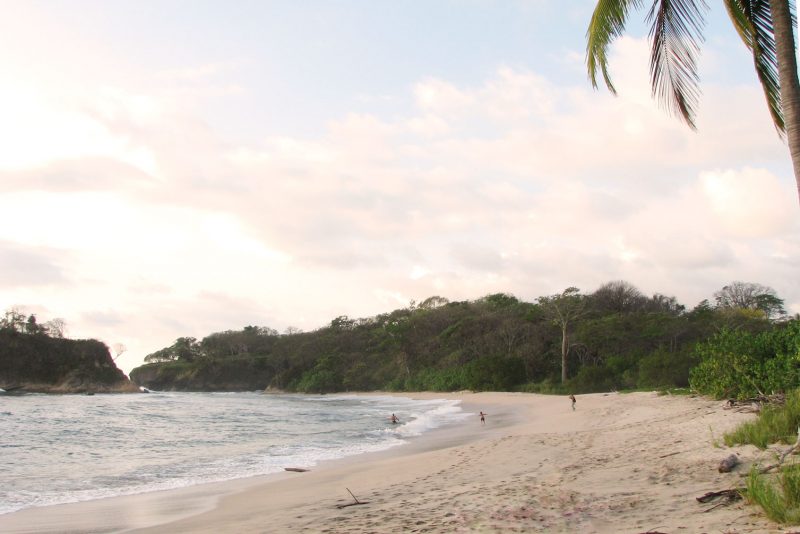 There are no specific apps made for driving in Costa Rica but you will need a navigation app to get around with ease, as the signs are often missing or misleading. The best navigation apps are Google Maps and Waze, Waze being the better of the two.

If you don’t have these apps your on phone, make sure to install them. You’ll need a Costa Rican SIM card to use them properly which you can buy at the airport in the baggage claim area. Make sure that the shop activates the card with data too so that you don’t have to try and activate it later – if you don’t speak Spanish, then it’s almost impossible.

Going For A Drive In Costa Rica

I have driven in over 30 countries and in some hectic countries like Kenya and Colombia. On a global scale, driving in Costa Rica is pretty chilled. The views along the way are second to none, the locals are helpful with directions, and the roads are good enough.

It’s best to drive defensively and have your wits about you in the city, but other than that, it’s a piece of cake, most of the time.