When you’re off on an adventure to a new country there is no better way to have the freedom to explore than by having your own car. Having a car gives you access to the entire country so you can get off the beaten track and see parts you would struggle to reach via public transport, and it’s way more convenient too.

But, driving in a new country is never the same as driving at home, and this is very much the case when driving in Greece.

In this article, I’m going to give you all the rules and regulations about driving in Greece, plus an insight into how to drive in Greece so you can always have a safe journey without any surprises. 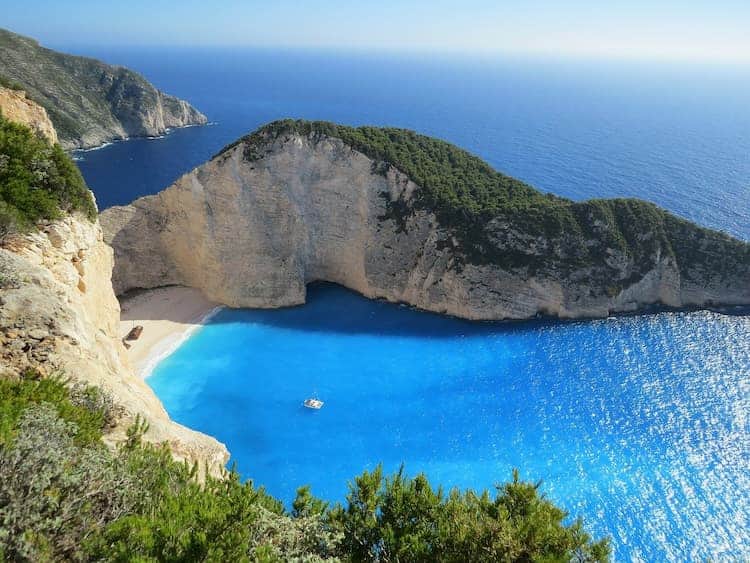 Most countries, including Greece, have similar driving regulations to each other but they probably differ a bit from your ones at home and it’s best to know them.

These are all the major rules and regulations for driving in Greece and by following them you should avoid any penalties.

Speed Limits For Driving In Greece

Greece has pretty good signage when it comes to speed limits but you’re not always going to find a sign that tells you the speed limit for the bit of road you’re driving on. If you follow these general rules, you should be ok and avoid getting any speeding tickets.

Parking in Greece is easy when you’re in rural areas but if you’re in a city, especially Athens, it can be a nightmare. Finding on-street parking is almost impossible and you’re best off navigating to a parking lot rather than wasting time driving around trying to find a space on the street.

There are also a few laws to be aware of when parking in Greece, here they are. 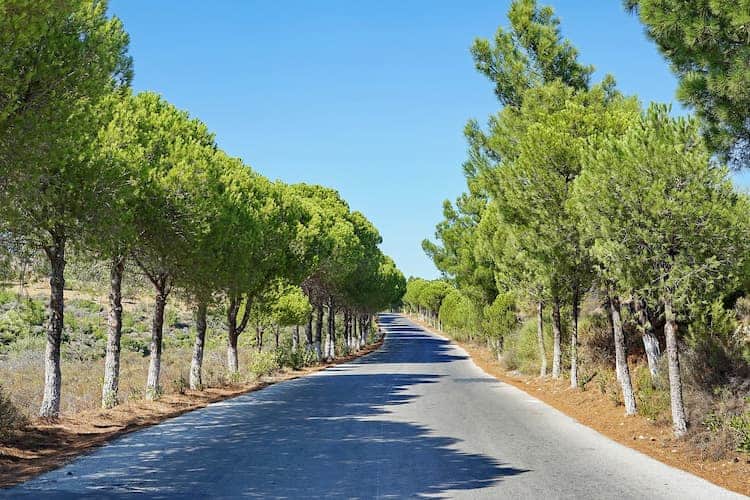 Unfortunately, when driving in Greece, a lot of the rules above are not followed which can make driving around a little stressful. Here are some tips and things to watch out for.

When driving in Greece, especially in the cities, you want to drive defensively. Most Greeks have a license but haven’t passed a test, so most of them have not been taught to drive, and make it up as they go along.

When driving in Greece, assume you’re the only one who knows how to drive properly and drive as if the car in front and behind you can do anything at any time.

Slow down early at traffic lights

The yellow light of a traffic light is a cue to slow down in most countries but in Greece, it seems to trigger a race to beat the light changing to red. This means when coming to a traffic light, make sure you break early to give any cars behind you enough time to realize before they trigger into race mode.

This is the best way to avoid being rear-ended but you might have some Greek expletives shouted at you by cars passing, annoyed that you haven’t played the game and joined in their race. It’s not worth it, and being shouted at is far more amusing than being rear-ended or risking a crossing.

Lanes are adhered to sometimes but not all the time, especially when it comes to driving at night or if in heavy traffic. Expect to be overtaken from both sides, and have cars overtaking in areas where they shouldn’t, even if there is a double line in the middle. The best plan is to stay in your lane and be very vigilant of any cars trying to overtake from any side.

Motorbikes are responsible for the largest number of road accidents in Greece and there are always some around. They do not obey any rules and will happily cross lanes and wiggle their way around in order to get where they are going a fast as possible.

If you’re driving on the Greek Islands, then you’ll find tourists using motorbikes, and most likely for the first time. Give them a wide berth as they are new to it and quite often not as sober as they should be.

Taxis Own The Road

If you come across a taxi while driving in Greece be sure to give them a lot of room. Taxis have an opinion that they rule the road and it is always their right of way. They will turn whenever they like, cut you off, and pretty much drive as if you don’t exist. When you see them, slow down and let them go or get in front of them, but don’t be near them.

Use Your Horn On Bends

When driving on the Greek Islands or in the mountains, you’ll often find a lot of steep roads with sharp corners. Even though using your horn incorrectly can end up with a fine, in these situations, it’s paramount.

Make sure to sound your horn before each sharp turn to let any vehicles on the other side know you’re coming so they don’t try something like an overtaking maneuver on the corner, which they do love to do.

Don’t Slow Down At Pedestrian Crossings

It will probably go against every bone in your body but you shouldn’t stop a pedestrian crossing. Greek drivers will not be expecting this and you’re likely to get rear-ended and shouted at pretty quickly. The pedestrians know it too, and will never cross the road at a pedestrian crossing when there are cars coming, so don’t feel rude about it. 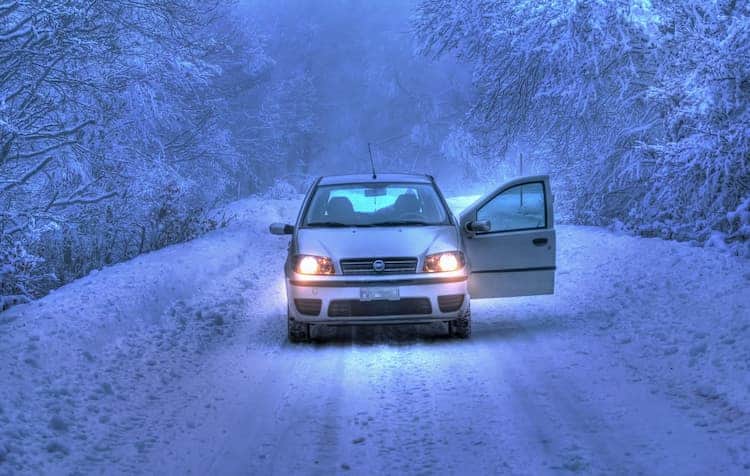 If you’re driving in Greece in the winter, you will need chains on your tires to get up into the mountains. They are covered in snow and ice all winter, the roads are not salted, and without chains, you are not going to make up, or down safely.

Local directions are not to be trusted

Most locals won’t speak very good English and you’re likely to end up getting lost if you follow their directions. Make sure you have a SatNav, map, or use Google Maps or Waze on your phone to get from A to B. This way you won’t get lost or frustrated.

If you plan on spending a few nights in Athens with your car make sure your accommodation provides you with a parking space that is just for you and always available. This way, you’ll save about 3 hours a day trying to find parking.

Animals are free-range and roaming

When driving around the Greek countryside, be alert for any animals randomly crossing the road. They are left to wander, often unattended, and will cross and even sleep on the road as they please. Hitting a Greek farmer’s animal will have serious consequences and it’s not something you want to experience.

The Greeks have a tendency to pull over anywhere on the road and leave their car in the lane instead of on the side. This even happens on blind corners and often they have stopped to take a picture of the view.

Whenever you’re driving around a sharp corner, slow down and go slow as you are likely to stumble upon a car that is sitting there stationary. 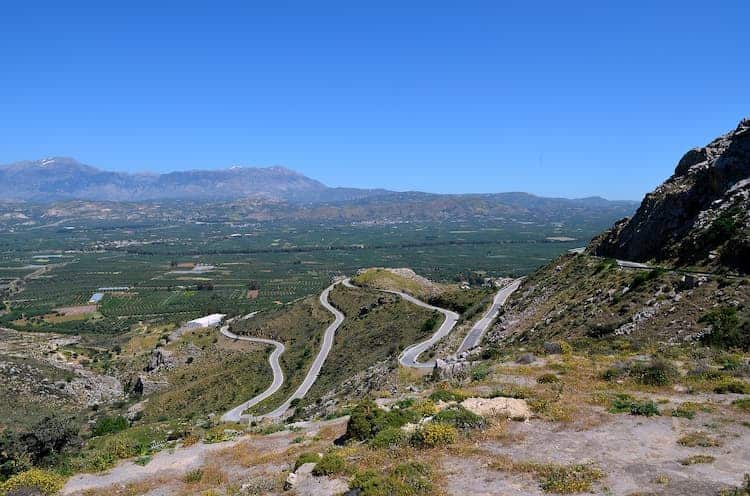 Road conditions vary a lot in Greece but in general, they are not all that good. Expect large areas without any lanes painted down the middle and sides, potholes are the norm and should be avoided if possible, and if you’re near a city expect a lot of traffic at rush hour times.

There are only two toll roads in Greece and both of them start or lead to Athens. One goes from Athens to Peloponnesus and the other goes from Athens to Thessaloniki. These are by far, the fastest roads to get to these destinations on, or any places en route, and the toll fees are not too expensive.

Gas stations in Greece are pretty regular on the roads and you shouldn’t get caught short. But, if you’re on the Greek islands then they can be a 30-minute drive away, so don’t go into the red.

The main thing to be aware of is the fuel prices as they can differ considerably from gas station to gas station and it is worth shopping around instead of going to the closest one.

Renting a car in Greece is as simple as most modern countries and you’ll find global and reliable car rental companies such as Europe Car and Sixt available at most airports and major towns.

To rent a car you will need to be at least 21 years old and have held your license for a minimum of 2 years. Some companies might charge you extra if you are under the age of 25, so bear that in mind.

You can use any EU or US license to rent a car with and if you hold a license from another country, you might need to get an international driving license. It’s best to check this with your car rental company before traveling.

Car rental prices are pretty standard in Greece when compared to other EU countries. Book in advance will probably get you a deal like in most countries, depending on the time of year and availability.

If you’re landing in Athens and then moving onto the islands, it’s far more cost-effective to rent a car on the islands than in Athens, as you’ll save ferry fees and the rental will cost you less.

When renting a car in Greece, you must by law have both fire insurance and third-party liability insurance for your vehicle which the car rental company should include in the rental price.

You then have the option to add collision damage waiver (CDW), theft protection, personal accident insurance, and super CDW insurance at an extra cost.

There are no driving-specific apps for Greece that might come in handy but it is a must to have a SatNav in your car or to use Google Maps or Waze for directions. If you have an EU sim card, you can use it in Greece, if not, you are best off buying a sim card at the airport so you always know your way around without having to ask for bad directions.

There you have it, everything you need to know about driving in Greece and renting a car. Remember to expect the unexpected and to drive quite defensively and you should get around without any issues.