Planning a winter trip to Geneva? Then you need to read our guide to the fabulous Swiss city in the winter season!

Geneva is an exciting city regardless of the season, but there’s something special about visiting it in the winter. The colder months bring with them the Chrismas Markets, numerous festivals, and all sorts of winter festivities to this fascinating city. There’s also the fact that Geneva is a stone’s throw away from some of the best ski resorts in the country, making it the ideal destination for all avid skiers.

Whether you’re there for the festivals or the slopes, here’s all you need to know about Geneva in the winter! 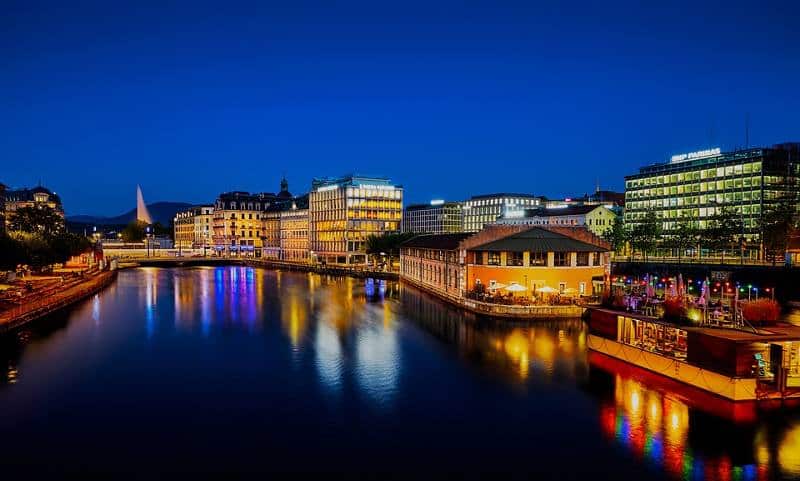 Geneva has a moderately continental climate with sunny and warm summers and cold winters. The Swiss city is surrounded by mountains, so it’s not too surprising that the winters in Geneva are pretty cold.

The winter weather in Geneva is quite cold, with average daily highs around 5 °C and lows below zero. It also rains and snows quite a bit in Geneva in the winter with more than a week of rain and snow in December, January, and February.

It’s worth noting that these are just the average highs and lows – temperatures can quickly drop to negative double digits in the evenings.

One great thing about Geneva is that the city is generally not very windy. It’s surrounded by mountains, which protect it from harsh winds most of the time. Naturally, it’s always windier on the lakeshore, but that’s expected. 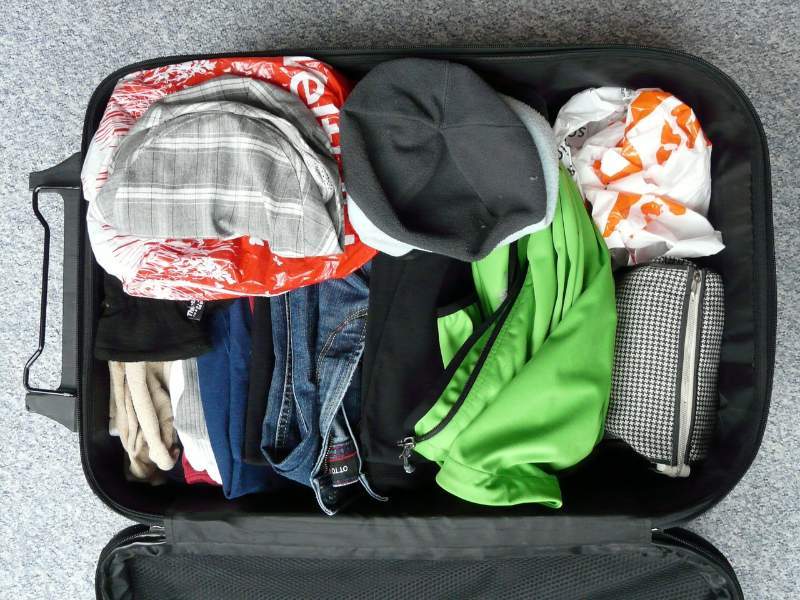 You should pack your warmest winter jacket if you’re traveling to Geneva in the winter. It can get very cold in the winter season and temperatures will drop below zero degrees Celsius at night.

Long-sleeve shirts, sweaters, parkas, and insulated jackets should all be in your suitcase. It’s also important to have at least one waterproof outer layer since there is a lot of rain and snow in Geneva in winter.

Also, be sure to pack a ski suit if you enjoy skiing or snowboarding. Geneva is situated at the foot of the Alps, and it’s just a short ride away from some of the best ski resorts in Switzerland and France. Quite a few people who decide to visit Geneva in the winter do so because the city offers excellent skiing opportunities, so keep that in mind while you’re planning your visit.

You’ll need warm and comfortable boots for exploring the city. Geneva is best experienced through long walks in the city center, especially when it comes to the winter attractions like the Christmas Markets and festivals. If you plan on exploring any hiking trails or ski slopes that are close to Geneva, you’ll want to pack your best winter gear. The city gets pretty cold in the winter, but it’s nothing compared to how cold it gets in the mountains.

Also, don’t forget about the accessories. Scarves, gloves, and warm hats should all be in your suitcase when you’re traveling to Geneva!

Best Things to Do and See 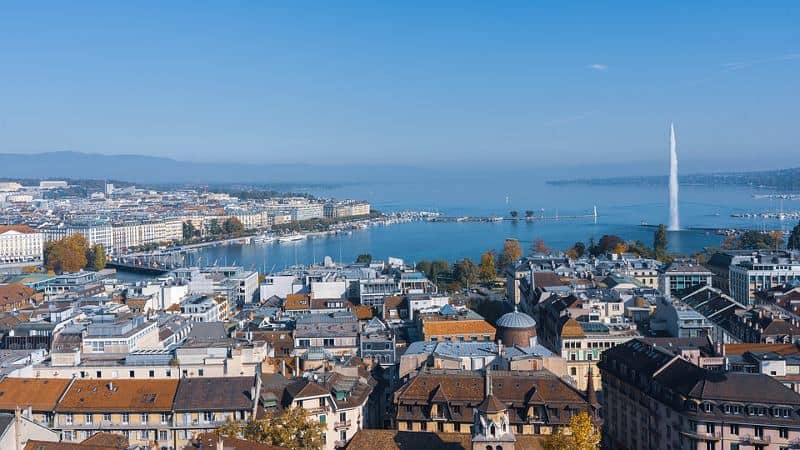 Now that you know what’s the weather like and how you should pack for the trip, it’s time to see the top things to do and see in Geneva in winter! 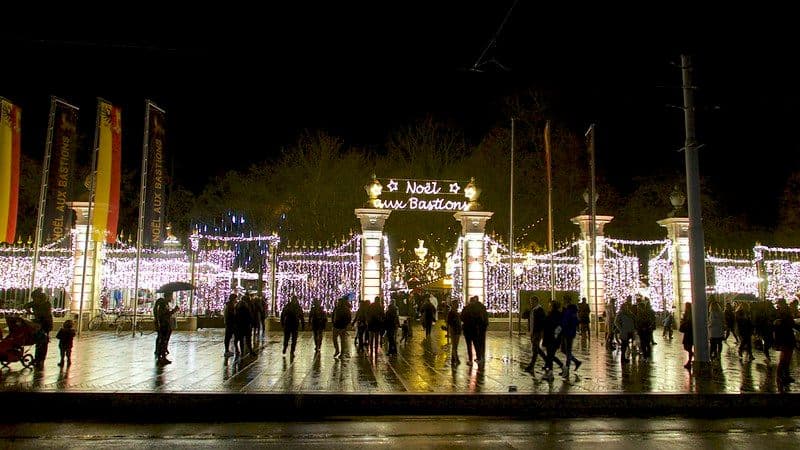 The Christmas Market in Geneva is truly a winter wonderland and the best thing about a winter trip to this city. The Geneva Christmas Markets are held at several locations in town, with The Jardin Anglais being the primary location.

Situated at the shore of Lake Geneva, the fabulous garden is home to many of the city’s notable attractions, including the famous flower clock. The clock is fascinating to observe if you’re visiting Geneva in the warmer months, but when you’re there in winter you get to admire the sparkly lights and countless stalls of the Christmas market.

It’s also a great time to discover the local cuisine since there are countless stalls at the Christmas market. You can try anything from mulled wine to street food, and there’s even a DJ at the Christmas Pub!

There’s also a carousel for the youngest visitors, as well as an entire program that keeps the kids entertained. Whether you’re a solo traveler or visiting Geneva with your family, the city’s amazing Christmas Market is one of the best destinations. 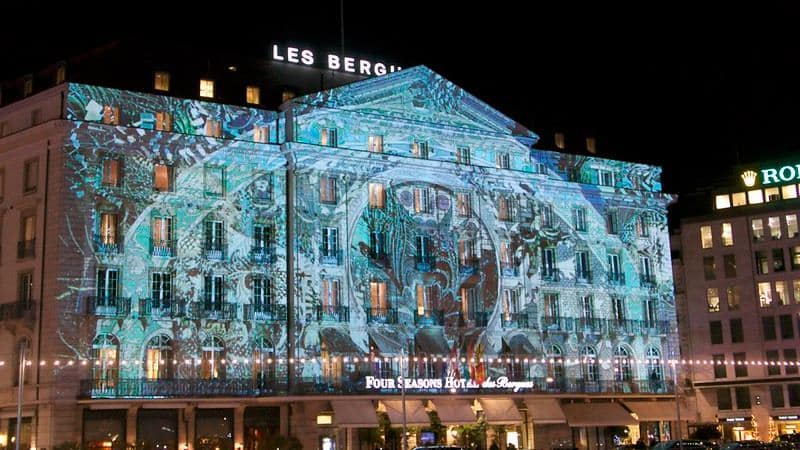 The winter season brings quite a few festivals to Geneva, Switzerland, and the Geneva Lux Festival is one of those. It’s usually held in late January and early February, and it presents many works of art that are made from light specifically for this festival. Artists from all over the world create these art installations, which take over the popular tourist locations in Geneva during the festival.

One of the best things about this festival is that it is entirely free of charge, which doesn’t happen with many other attractions in Switzerland. The festival is held in the open air and anyone can come and visit it and admire the many fascinating light installations.

Geneva is home to the Patek Philippe Museum, which is aptly nicknamed a temple to watchmaking. Regardless of how much you know about clocks, watches, and their mechanisms, it’s definitely worth it to check out this fascinating museum.

The Patek Philippe Museum in Geneva boasts a fascinating collection that showcases Philippe Stern’s passion for horology. The collection chronicles more than five centuries of watchmaking history, as well as the importance of all the decorative arts that are associated with watchmaking (gem-setting, engraving, etc.).

It’s named the Patek Philippe Museum but it’s not dedicated just to that one brand. Instead, it’s a remarkable showcase of the history of the profession, with an inspiring presentation of antique pieces that date from the 16th to 19th centuries.

There’s also an entire collection dedicated to the masterpieces that were designed by Patek Philippe since the company’s founding. The exhibit chronicles nearly two centuries of history of the brand, and it’s absolutely fascinating to discover.

READ: ONE DAY IN GENEVA ITINERARY 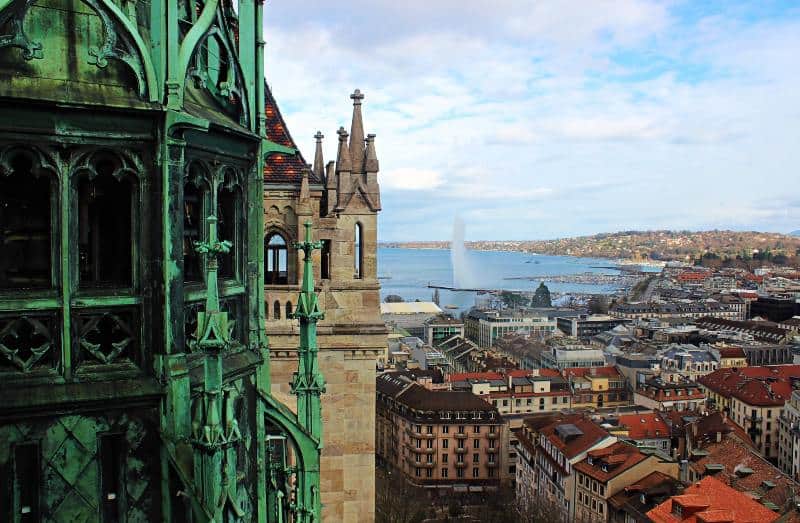 St Pierre Cathedral is one of the most famous landmarks in Geneva and it’s a popular tourist attraction year-round. It was initially constructed as a Roman Catholic cathedral, but during the Reformation, it was turned into the Reformed Protestant Church of Geneva. It’s also the adopted home church of John Calvin and home to a wooden chair that was used by one of the fathers of Calvinism.

The north tower of the Cathedral is open to the public and it features an observation deck with fabulous panoramic views. The view of Geneva’s rooftops and the lake is absolutely amazing from here, just be sure to warm up since it can be pretty cold at the top of the tower.

The cathedral is situated in the city’s medieval center and it’s one of the most recognizable attractions in the area. It’s a landmark you can’t miss while exploring the city’s historic center, and it’s equally impressive on the inside as on the outside.

Switzerland is well known for its chocolates and cheeses and Geneva is a great city to discover more about the country’s delicacies. Fondue and chocolate tours are a thing in Geneva year-round, but they’re particularly popular in the winter. There’s just something special about sipping a cup of hot chocolate while admiring the city’s twinkly lights and snow-covered rooftops.

Gruyeres cheese fondue is most popular in Geneva, which makes sense since the small town is so close to this fascinating city. You can book a guided tour or just head to the highest-rated restaurant in the city – Café du Soleil is widely praised as having the best fondue in Geneva.

You should also try to find a traditional restaurant that serves Raclette cheese impaled on a spike – it’s the best and coolest way of tasting the cheese and you shouldn’t settle for anything less.

A chocolate tasting tour would be separate from a fondue tasting tour, but you could do both in a day. Book a guided tour of Geneva’s best chocolate shops, or wander around the historic city streets and discover them on your own. Guided tours will include a discount at certain chocolate shops and some might even include a chocolate-making workshop or a visit to a proper Swiss chocolatier! 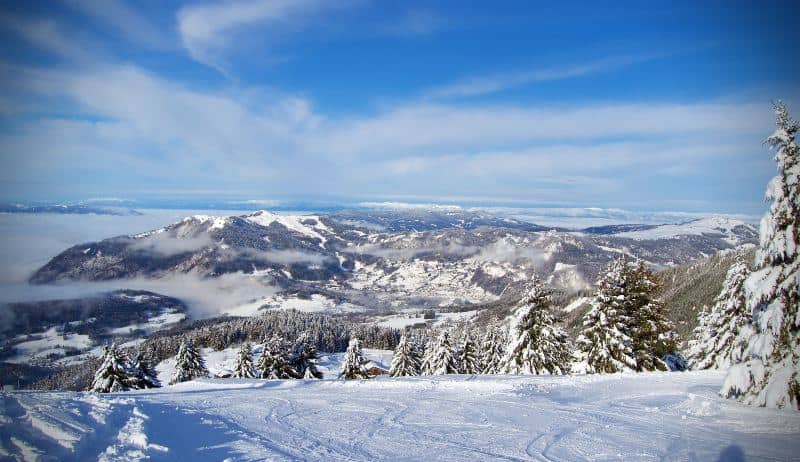 Geneva is a great place to visit in Switzerland in the winter if you enjoy skiing but don’t want to go on a proper holiday in the mountains. There are many amazing ski resorts about an hour outside the city, so you can hit the slopes in the morning and be back in Geneva just in time for dinner.

Praz de Lys is the closest resort to the city. It’s just under an hour outside Geneva and it boasts 55 kilometers of skiing pistes. The top height at the resort is 1980 meters, which should be enough for more experienced skiers.

If you’re okay with a slightly longer commute, head to La Clusaz. This world-class resort boasts 85 slopes over 125 kilometers of ski pistes, with a top resort height of a whopping 2600 meters. It’s great for beginners, intermediate skiers, and families, and it’s close enough to the city that you can travel there and back on the same day while skiing for hours in between.

If you’d rather not travel to the ski resorts, you’ll be glad to know that Geneva is also a popular location for cross country skiing and snowshoeing. There are also numerous ice skating rinks in various locations throughout the city, making Geneva the perfect destination for those who enjoy winter sports. 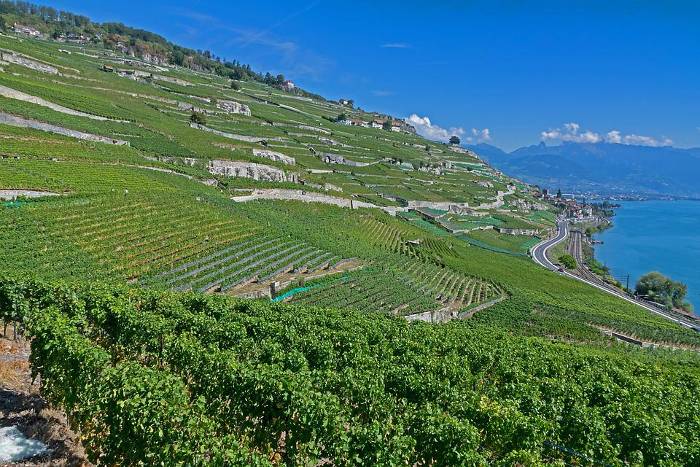 Geneva is the third-largest wine-producing canton in Switzerland, so it’s pretty much a paradise for wine lovers. The canton has a vary diverse wine production, so there are plenty of wineries making everything from the lightest whites to the strongest reds.

However, most wineries are situated in the hills outside the city of Geneva, so you’ll need to make plans if you want to go to a proper vineyard. It’s undoubtedly worth it to sacrifice a day of walking around town for a trip to a hillside winery, especially if you consider yourself a connoisseur.

In true Swiss tradition, most wineries will pair their best wines with appropriate kinds of Swiss cheese, so you’ll get a better understanding of Swiss cuisine and its appeal. Also, it’s worth noting that wine and cheese tours can be done in the city proper – instead of venturing out into the countryside, you’ll spend most of your time hopping from one city locale to the other. Join an organized tour to be guided by experts who know exactly where to find the best selection of local wines. 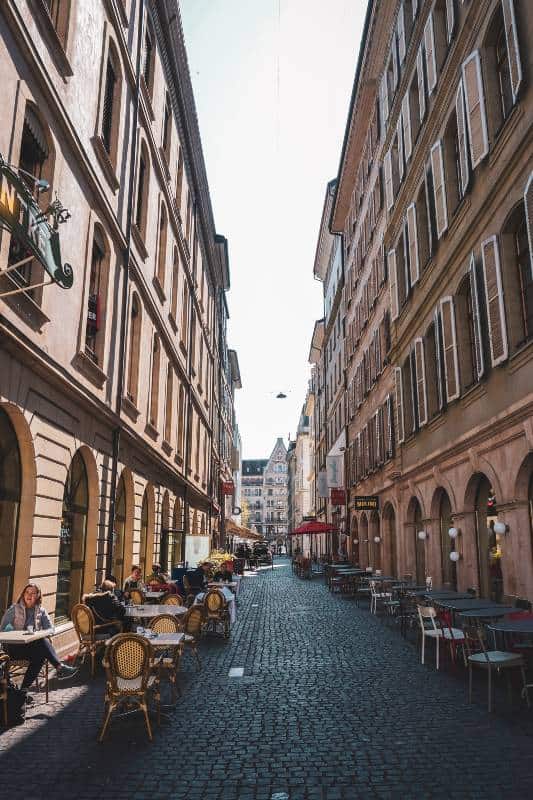 The Old Town of Geneva is a tourist attraction you simply can’t skip if you’re doing a tour of the city. It’s both the historic old town and the city center, and it’s home to many of the city’s most famous landmarks.

Geneva’s Old Town encompasses all the amazing museums, bars, and restaurants, so there are plenty of things to do and see here. It’s also home to the fascinating St. Pierre Cathedral, as well as the city’s oldest public square. Also, let’s not forget about all the shops, especially those one Rue du Rhone.

Walk around the narrow city streets, try the local wines and fondue in the restaurants, and visit as many museums as you want. The museums in Geneva Old Town are mostly dedicated to art and history, so there’s a lot you can learn about the history of both this town and Switzerland.