10 Highest Bridges In The World

What are the 10 highest bridges in the world and where are they? That’s what we are here to find out as driving over some of these is quite an awesome experience since the views tend to be magical and they are incredible feats of engineering too.

Now that we have cleared this up, let’s take a look at the 10 highest bridges on the planet, here they are starting with the highest. 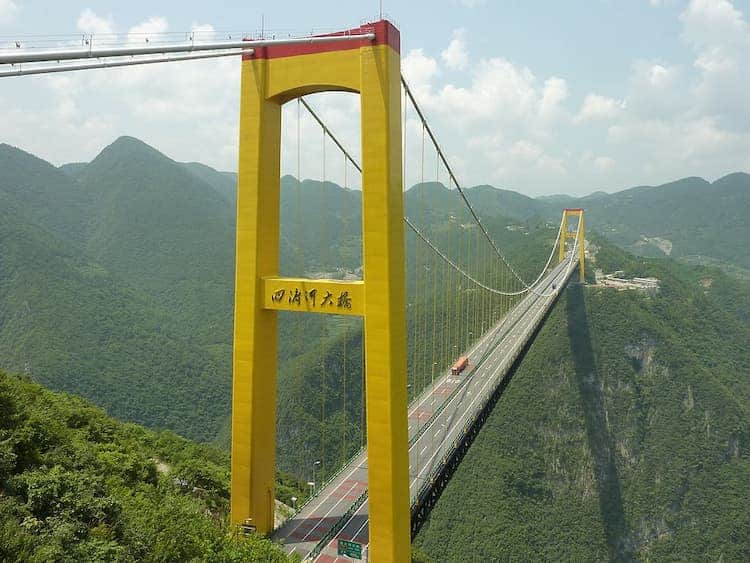 When they first started building the Sidu River Bridge in 2005, the first thing the engineers did was shoot a rocket from one side of the gorge to the other which carried two pilot wires 980 meters across the huge gorge, how cool it that. It then took another 4 years to complete the Sidu River Bridge and it was then open to the public in 2009.

The bridge is a part of the G50 Huyu Expressway, a new highway that connects Shanghai to Chongqing. The suspension cables on the bridge are built from a whopping 127 strands of wire that are twisted into a hexagonal shape and these are what keep the bridge stable.

If you ever have a chance to cross this bridge, the views are incredible as you look down the steep gorge onto the Sidu River and the lush green hillsides that fall into it.

The second-highest bridge in the world is also in China and again, it crosses a river gorge in central China but this time it’s in Shuicheng County. The Puli Bridge stands an amazing 485 meters high and it’s a very new bridge as bridges go only being completed in 2015.

The Puli Bridge is 628 meters long and it spans a gorge that crosses the Beipan River which then leads to the stunning Gexiang River gorge.

The Puli Bridge was built as part of China’s new G56 Hangzhou-Ruili Expressway which connects Liupanshui and Xuanwei. The drive along the G56 is pretty beautiful as the river follows the expressway as you go and stopping on the Puli Bridge is a must so you can look over into the gorge and see where the Beipan River meets the Qingshui River. 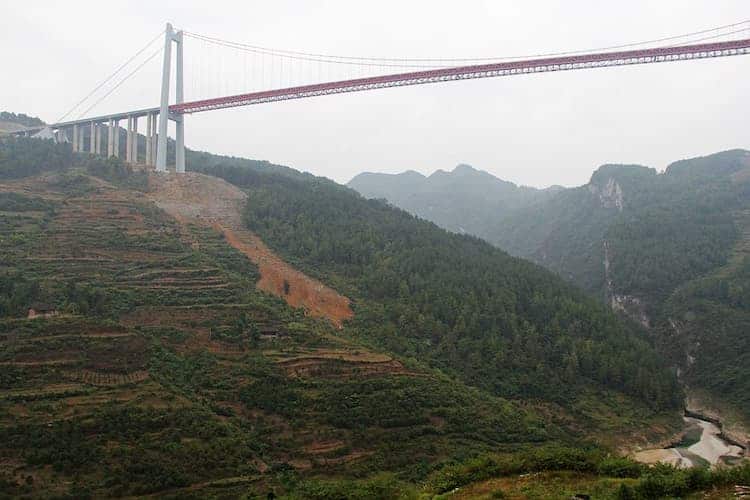 The Qingshui River Bridge stands 406 meters high above the Qingshui River gorge in the Guizhou province of central China and is also a part of a new expressway called the Guiweng or G69 which was built to shorten travel times while crossing the country. The new expressway has made the distance between Weng’an County and Guiyang 23 miles instead of 100 miles.

The Qingshui River Bridge is super long as it spans 1130 meters from one side of the gorge to the other and it cost some 200 million dollars to build.

The Baluarte Bridge is the highest bridge of its kind (cable-stayed) in the world and its 520-meter length spans the Baluarte River gorge and connects the two counties of Durango and Sinaloa.

It forms a part of the Durango-Mazatlán highway which is a new expressway that replaced an old winding road called the devil’s backbone. It was designed to shorten journey times and it now takes 3 hours instead of 8 hours to go from Mazatlán to Durango crossing 32 bridges and running through 63 tunnels.

The Baluarte Bridge was opened in 2012 and the view from it into the gorge is very beautiful and it’s worth stopping if you’re driving across Mexico. 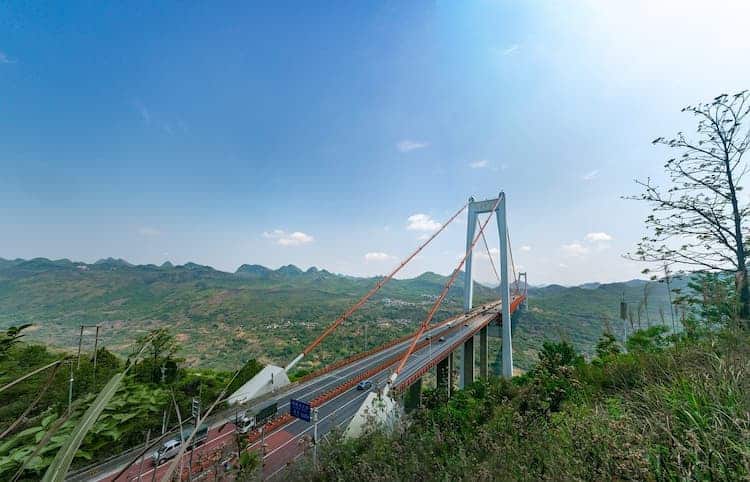 The fifth highest bridge in the world is the Baling River Bridge in the Guizhou Province of China which stands at 370 meters high as it crossed the Baling River Gorge. Again, it was made as part of an expressway, the G60 Shanghai-Kunming Expressway spanning Kunming and Guiyang, which has reduced the journey time to 4 minutes when it used to be one hour.

The Baling River Bridge was built in 2009 and its 1,088-meter length crossed a very beautiful gorge in central China. The gorge is so pretty that it was the site of an international base jump, the Chinese Bridge Parachuting International Challenge in July 2012 when 30 base jumpers from 15 nations came to the bridge to base jump off it with their parachutes and landed in the gorge after a 375-meter drop.

Since China has been building all these new super high bridges (the Baling River Bridge was finished in 2009) it has become a bit of a hotspot for base jumping since it has the best facilities with the added benefit of the bridges being in a very beautiful and natural location.

The 6th highest bridge in the world is the Beipan River Bridge which is also in China and is also part of a new expressway – I’m guessing you’re noticing the pattern here again. The Beipan River Bridge is 366 meters high and when it was finally built in 2003 is was the highest bridge in the world but was quickly overtaken by the five bridges mentioned above.

You’ll find this bridge ib the western Chinese province of Guizhou and it was made in order to connect more rural parts of the district to the hubs of Ashun and Guiyang. It’s a suspension bridge that is close to around 800 meters long and is another amazing example of Chinese engineering.

If you do happen to drive across this bridge, you’ll find a parking area where you can stop to admire the stunning scenery and of course the bridge itself.

The Liuchong River Bridge is a cable-stayed bridge that runs for 438 meters as it joins one side of the Liuchong River gorge to the other, connecting the towns of Chenjiazhai and Bazi and making up a part of the S55 Qianzhi Expressway which joins the city of Anshun in the south to the city of Zunyi in the north.

The Liuchong River Bridge was built in 2013 and being in the Guizhou district of western China is also surrounded by some magical landscapes which include, again, a stunningly dramatic gorge, and rugged mountainous scenery all around.

On the northeastern side of the gorge, there is a 150-meter vertical cliff that drops straight down into the gorge and the Liuchong River. If you have the chance, pull over and peer over the side for an amazing view. 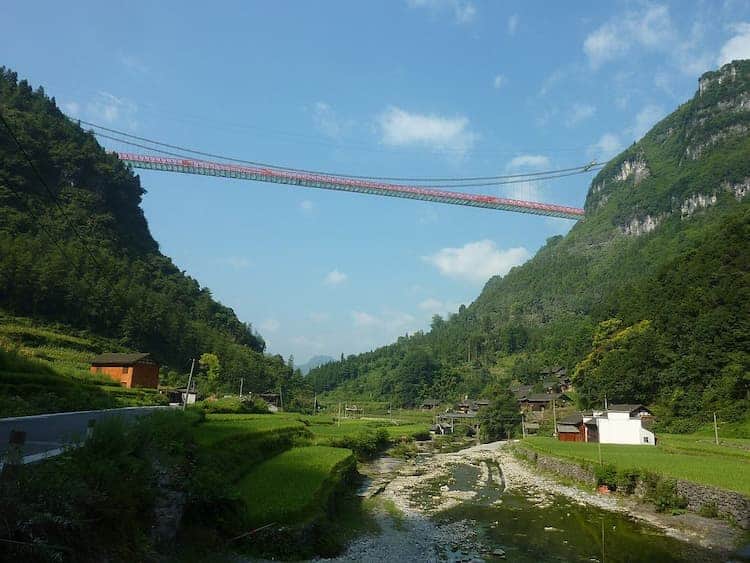 The Aizhai Bridge is known for its incredible views as the Dehang Canyon is quite a special place and is covered with incredible forests and a mountainous landscape.

The Aizhai Bridge is a suspension bridge that connects Changsha to the Chongqing Municipality and is a part of the G65 expressway. It was planned to be completed in 2012 after the building commenced in 2007 but China does things quickly and the bridge was completed early in 2011.

While the Lishui River Bridge does cross a river, unlike the other highest bridges in China, it’s not actually in the middle of the countryside and is a part of a large town/city that sprawls along the banks of the river. 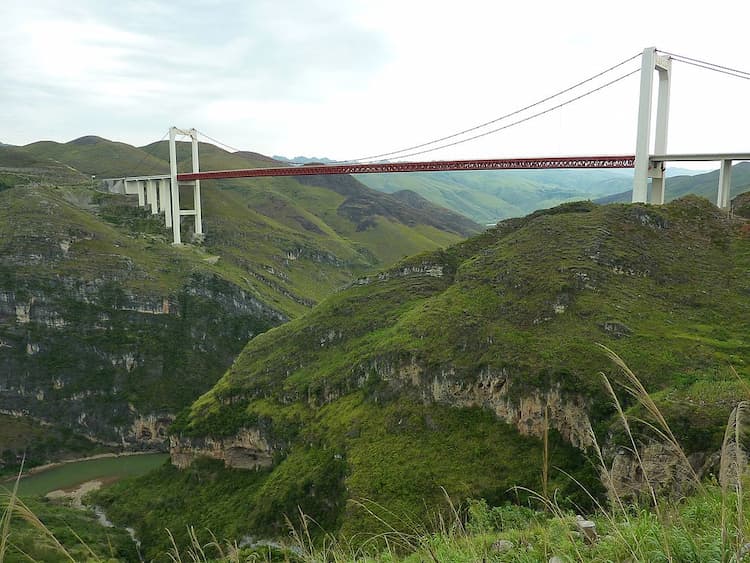 The Beipan River Hukun Expressway Bridge is a suspension bridge that was built in 2009 is a whopping 636 meters long.  It’s a vital part of the G60 Shanghai-Kunming Expressway that is invaluable in connecting China’s capital to the central provinces.

The views from the Beipan River Hukun Expressway Bridge are quite amazing. You’ll see a sprawling village on either side of the gorge just beneath the bridge, beautiful mountains covered in forests in both directions, and the scenery inside the dramatic gorge is also very beautiful.

There you have it the 10 highest bridges in the world and as you already know most of them are in China and all of them have been built in the last 20 years. This just goes to show how advances in engineering have allowed such amazing strictures to be built in recent years and the added convenience these bridges have created is quite amazing.

Can you imagine scaling a gorge for 2 hours to get to a town just on the other side? Or driving around for 3 hours to see a friend who is literally 5 minutes away as the crow flies? The addition of these bridges has made a huge difference to people’s lives and they are also pretty cool to look at and see the views from too.