Jamaican Drinks You Must Try

If you are planning on visiting the stunning Caribbean island of Jamaica then there isn’t a better way of making each day of your trip a little more special than by having a different local drink.

The drinks in Jamaica range from delicious non-alcoholic drinks such as Jamaican ginger beer to fantastic alcoholic drinks like Red Stripe beer to yummy Jamaican cocktails that are mainly based on Jamaican rum.

Whatever kind of drinks tickle your fancy, between the warm climate and the stunning vistas of Jamaica, you couldn’t have a better place to enjoy them. Here are the Jamaican Drinks you must try while you’re there. 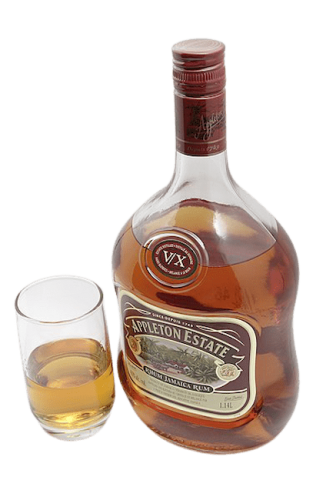 If there is one spirit Jamaica drinks – it’s rum! Jamaican rum is made, like all rum, from sugar cane and it’s believed that rum production started in Jamaica after the Spanish arrived on the island and planted cane sugar plantations all over the island.

The world’s most famous Jamaican rum is probably Appletons and their estate makes some of the most delicious dark rum in the world. If you love rum and want to try the best Jamaican rum then grab a drink of Appleton Estate Extra Dark Rum straight up with ice.

Another Jamaican rum worth trying, which is more of a local rum is Wray & Nephew White Overproof Rum. You’ll find it in all the local grocery stores and bars. It’s a white rum that goes well with a mixer such as coconut water.

Jamaica produces loads of different blends of Jamaican rum though and if you love dark or white rum, you’ll be spoilt for choice at any bar on the island. Some are better off with a mixer while others you can sip straight.

It’s thought that Jamaican rum punch originated in the 17th century when British sailors, who had come from India, decided to add some rum to their already made fruit cocktail.

The local rum punch is a great drink. Sweet and refreshing with lovely tropical flavors and each one you try will be mixed a little differently. As well as being great on the tongue, it’s also one of the most visually stunning Jamaican drinks with pinks and yellows sitting separately in your cocktail glass.

Be careful when sampling rum punch as they can be very strong alcoholic drinks, so drink responsibly.

A Jamaica drink you have probably never heard of as it’s one that is hard to find outside of Jamaica is Irish Moss. It’s one of Jamaica’s favorite non-alcoholic beverages and you’ll be surprised to hear that it’s made from algae.

Irish Moss, aka sea moss, or Chondrus crispus if you want to use its scientific name, is a red algae that grows along the rocky shores of Jamaica. This red algae is extremely good for you and is known to have great health benefits and it’s used to make kind of Jamaica’s natural version of an energy drink.

To make Irish Moss, they take the red algae and boil it in milk and then add honey to taste. When you drink it, you’ll feel quite full thanks to the milk but also quite revitalized thanks to the algae. It’s also said to increase male libido.

Legend has it that the Irish brought the algae with them and planted it in Jamaica, hence the name. 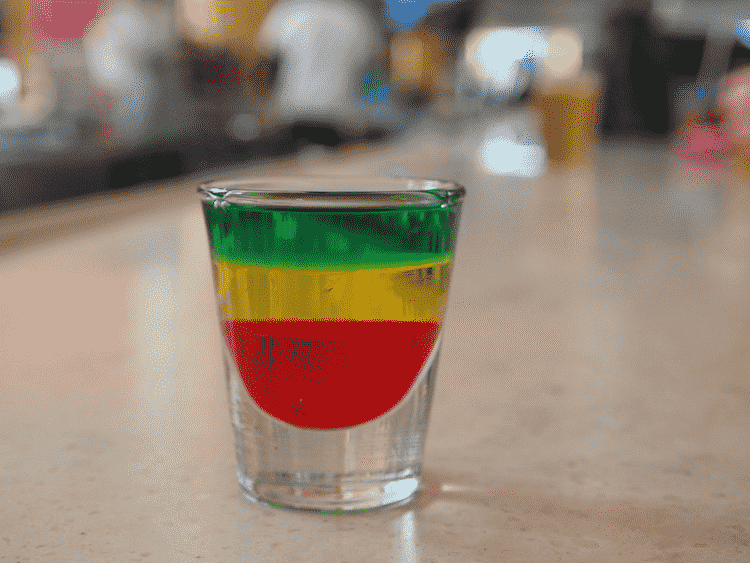 You might have guessed that there had to be a Jamaica drink named after the Jamaican legend Bob Marley and it’s probably the first Jamaican cocktail you should try on the island. Be warned though, a Bob Marley cocktail is more of a shot than anything and it’s pretty punchy.

A Bob Marley consists of rum, orange curacao, blue curacao, fresh mango, lime juice, sweet and sour mix, and strawberry daiquiri mix. These ingredients are layered to create the colors of Rastafarianism, which is a religion from Jamaica and one that Bob Marley was a part of.

A Bob Marley shot is green at the top, yellow in the middle, and red at the bottom. You can have it frozen with ice cubes or you can opt to have a flaming bob Marley – which will help burn off some of the booze.

As far as alcoholic drinks go, this is a punchy one, to let it settle before having another.

Another Jamaican drink you should try is a Jamaica Bobsleigh or Jamaican Bobsled as it’s often called. It’s the perfect Jamaican drink to sip at a local bar in Montego Bay while watching the sunset, or anywhere in Jamaica to be honest.

Named after the famous bobsleigh team from Jamaica (you must have seen the film Cool Runnings), this popular drink is a bit like a daiquiri but a little bit punchier.

It’s made with a mixture of rum, lime juice, pineapple juice, cinnamon syrup, and allspice dram. Once the ingredients are mixed, they are then added to a cocktail shake with ice cubes and shaken up before serving.

It’s a very tasty Jamaican cocktail that is very refreshing and one that is very easy to make at home too. So if you’re ever having a Jamaican-themed jerk BBQ, make sure you have a pitcher of two Jamaican Bobsleighs going around.

To make a Dirty Banana you’ll need to mix a ripe banana with milk, crème de banana liqueur, coffee-flavored liqueur, and ice cubes in a blender. Once blended, you then pour the Dirty Banana mixture into a glass with chilled cream at the base. You can also use Bailey’s Irish cream or coconut milk cream instead.

As far as Jamaican drinks go this one uses a lot of the natural ingredients found on the island (rum, bananas, coffee, coconut) and it tastes a bit like a yummy smoothie that’s been laced with quite a lot of booze.

A Purple Rain drink is a kind of a Jamaican version of a long island iced tea and is made with a mixture of vodka, blue Curacao liqueur, cranberry juice, lemonade, and grenadine syrup. All the ingredients, except for the grenadine, are mixed in a cocktail shaker with ice and then poured into a glass. The grenadine is then added and as it sinks through the cocktail, it looks like Purple Rain.

There are quite a few versions of these Jamaican drinks but the one above is by far the most popular one. Make sure to check any cocktail menus for it as you’re likely to find a few different ones worth trying. 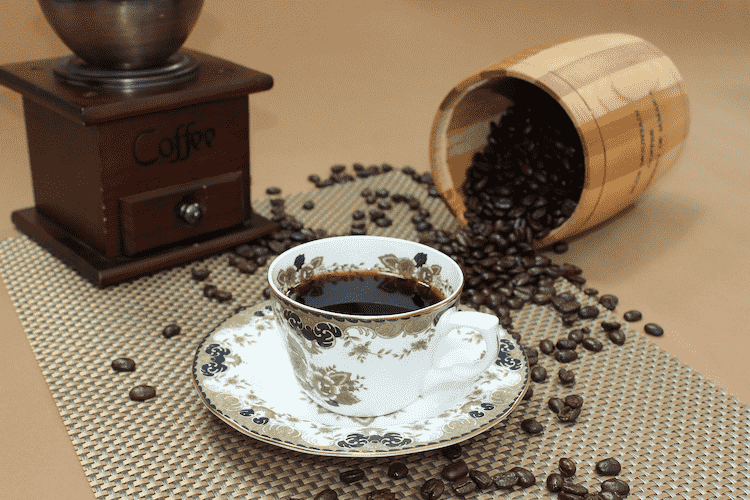 Jamaican coffee and more specifically Blue Mountain Coffee is absolutely delicious and it’s the most delicious non-alcoholic drink in Jamaica you should try. It’s also one you can buy around the world in the supermarket so you can have a little taste before you get to Jamaica.

Blue Mountain Coffee is grown way up high in the Blue Mountains of Jamaica and if you love coffee, this one will really tickle your taste buds. Since all the coffee is processed by hand and has a longer growing season, it means the yields are lower but the quality is higher and this is what gives it its fantastic taste.

Almost 90% of this coffee is exported out of Jamaica and 75% of that goes to Japan, that’s how popular it is. While you’re in Jamaica, make sure to start every morning with a cup of local Jamaican coffee, and be sure to take a few bags home with you too.

One of the favorite local drinks in Jamaica is Ting Grapefruit Soda and it’s one that is drunk at pretty much every meal. It’s made from soda water mixed with concentrated grapefruit juice and is super refreshing, especially on a hot Jamaican day.

You’ll find it in pretty much every bar, restaurant, or grocery store you go into in Jamaica and I’d highly recommend having some cold ones ready for after a swim in the sea or a long walk in the jungle.

Grapefruit Soda can also be made into numerous alcoholic drinks by simply adding some rum or vodka with some ice to it.

Bag Juice is exactly what it sounds like, juice that comes in a small plastic bag. It’s one of the best Jamaican drinks for kids and the local kids particularly love it as it can easily be frozen and they sip on it as it melts.

Bag Juice comes in all kinds of different flavors from lime juice to pineapple juice, orange juice, and more. I have to say that pineapple juice is my favorite flavor but they are all pretty good, to be honest.

Make sure to pick up a few of these drinks in Jamaica if you’re traveling with kids. They are pretty sweet drinks though so don’t be giving them to the kids before bed or you’ll be in for a late night. 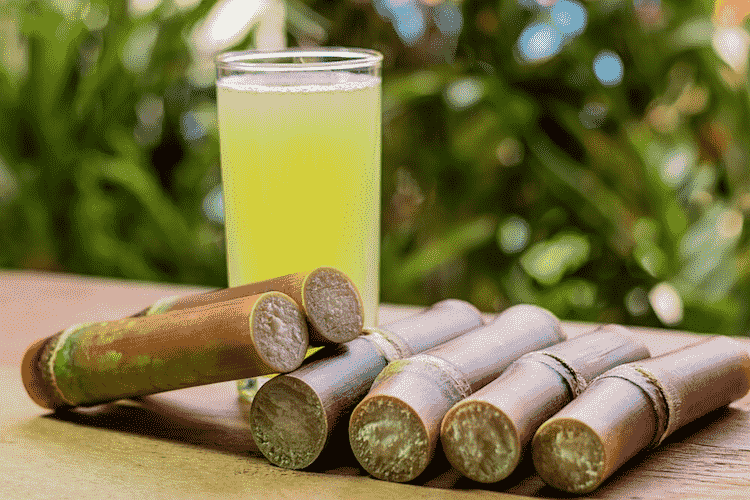 Sugar Cane is another of the favorite local Jamaican drinks and you’ll only find it being served fresh on the side of the road by street vendors. It’s made by blending up raw sugar cane with water into a juice and unsurprisingly, tastes very sweet but also quite refreshing, especially when mixed with some lime or lemon juice.

I’d also recommend chewing some sugar cane, as it’s not something you can do in many parts of the world. You simply ask a vendor to cut the bark off the sugar cane and then slowly chew until you start getting all the sweet sugariness coming into your mouth.

Jamaican Ginger Beer is some of the best ginger beer in the world and is made from fresh ginger that is grown on the island along with some sugar cane syrup but not corn syrup. This mixture is then carbonated and canned to make the ginger beer that every Jamaican drink.

A Moscow Mule has nothing to do with Russia and it tastes better when made with Jamaican ginger beer instead of any other ginger beer in the world. Make sure to have a few of these drinks in Jamaica and they are especially tasty around mid-afternoon as the ginger beer gives you a real buzz.

There are lots more Jamaican drinks you should try too which we didn’t have room to cover. These include drinks such as fresh coconut water, Jamaican Guinness Punch, Jamaican Sorrel Tea, Rum Cream, Red Stripe Beer, and a Jamaican Zombie cocktail.

I’d highly recommend starting your day with some fresh coconut water as it’s packed full of electrolytes that get you going in the morning. Red Stripe Beer is also delicious and very refreshing and is rated as one of the world’s best lagers.