High above the stunning Simadals fjord, not too far from Eidfjord, lies a small farm called Kjeasen that can only be reached on foot via a challenging path, or via a very long one-way tunnel. The name actually means baby goat hill, and given the location, it has certainly earned it.

Before 1975 there was not even a road or tunnel and the few inhabitants who lived up there could only get there on foot. It is one of the most isolated farms in the world. Today, only one person lives there in the summer, and the place is far more populated by hikers who have gone the hard way up, or tourists who have come by the ever-winding road and tunnel. 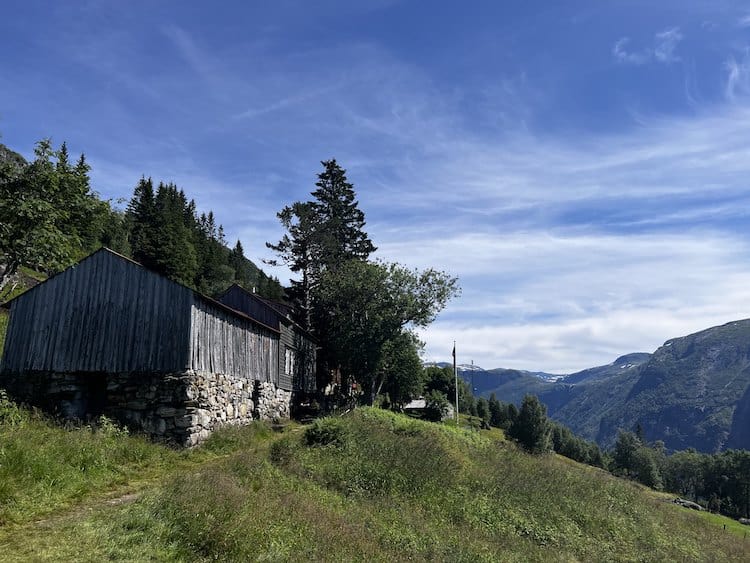 Table Of Contents Show All
The Views From Kjeasen
Details Of The Kjeasen Hike
Hike Up, Hike Down, Or Both?
Getting To The Hike
Driving to Kjeåsen
Parking At Kjeåsen

The idea that anyone farms up here is astounding on its own. But the views over the fjord are also spectacular. 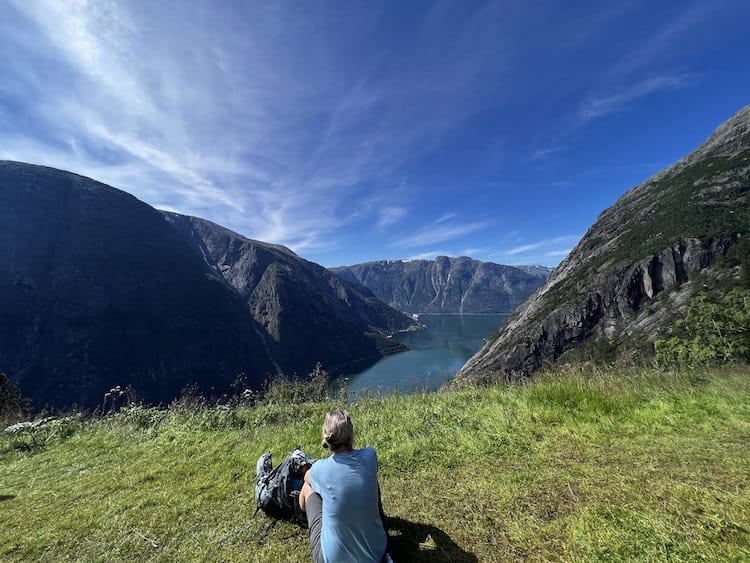 You can see all the way down to Eidfjord and further down the Hardangerfjord to the right as well. And with the lush meadows in front of you, it brings to mind (to me at least) something from the Sound of Music – even though that was set in Austria! 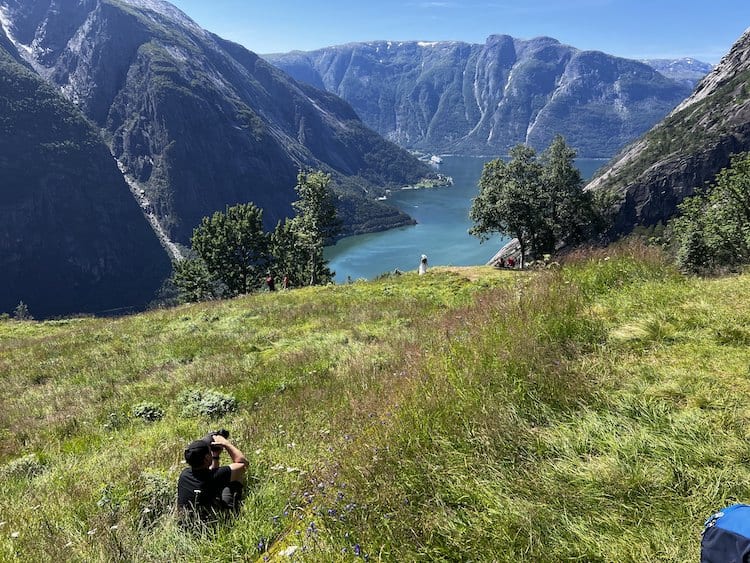 Details Of The Kjeasen Hike

The Kjeasen hike is a short but very steep and challenging hike from the power station at the base of the hill all the way up to the meadows below the farm. 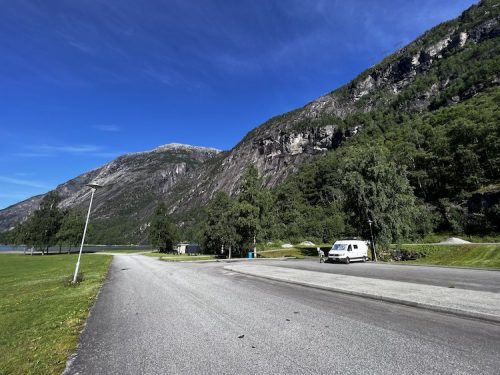 There is ample parking at the power station (I have marked the exact spot on the Google Map above – as it was not obvious to us where it was or where the hike started).

The hike starts along the road from the car park next to the fjord. After passing the Kjeaneset boat house, the path slowly makes its way along the fjord until it quickly starts climbing into the forest. 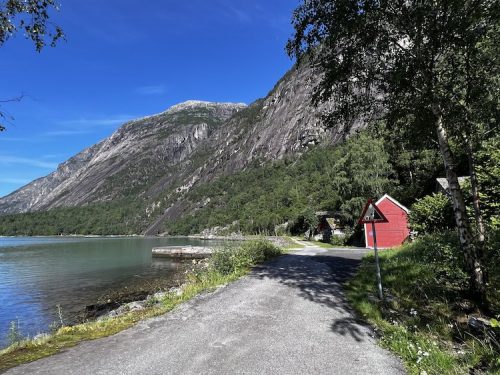 There are a lot of aids to help you climb up to the meadow of the farm. From simple bridges made from wood that juts out from the rock right on the fjord, and two plank-wide ones high above the ground, to hand-made wooden ladders and ropes to help you ascend the difficult rocky terrain. 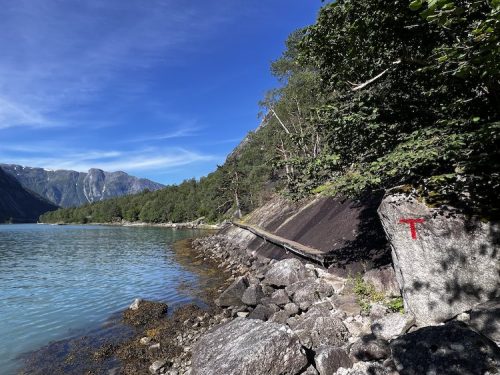 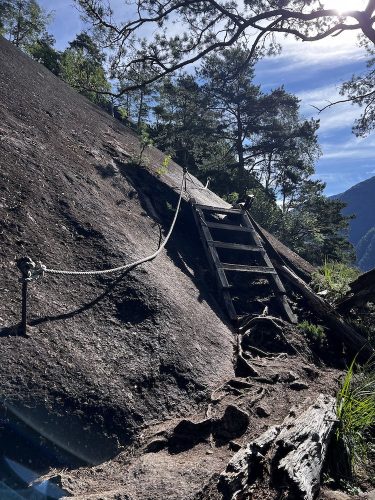 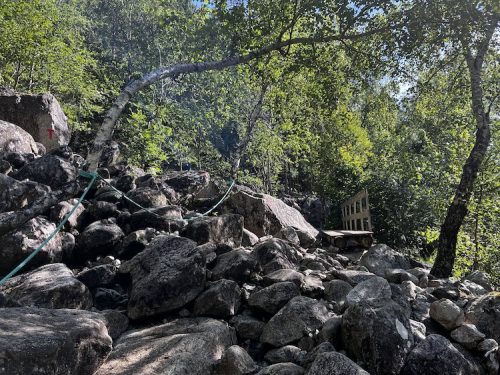 There is also a little bit of rock holding as you ascend and lots of slippery sections to navigate. The path is never really dangerous but it is definitely very challenging. 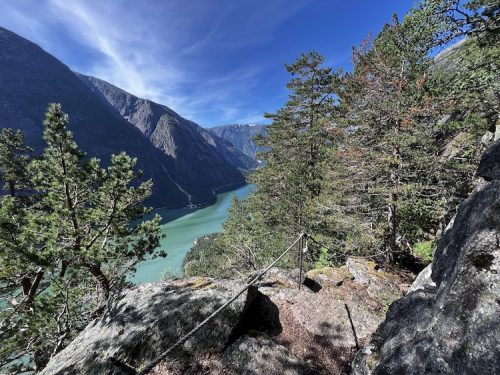 We are both experienced hikers and this was still challenging for us. Dangerous – not in most cases, but you need to be sure-footed, not scared of heights, and reasonably fit. You have to climb up 550m meters in a very short time, so it is not a simple hike at all.

Hike Up, Hike Down, Or Both?

On top of this, you also have to do the whole route down again. Which can often be more difficult than the ascent.

We chose to hitchhike down which has its own challenges. First, we arrived before lunch and there were not that many people to ask for a lift. Many arrived after lunch.

Getting To The Hike

The drive up and down is limited to different halves of the hour. It is about a 12 minute drive up a steep windy road that ends in a tunnel, which itself ends at the farm and car park.

Technically, you are only allowed to drive

– down – only on the half hour 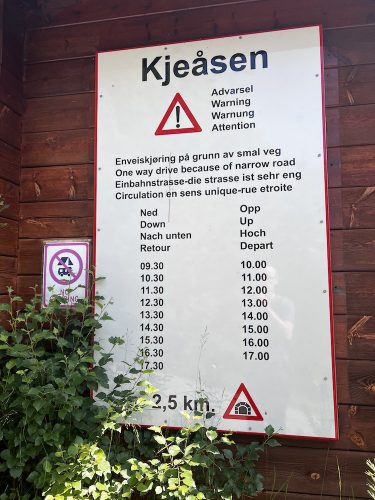 You can see the details of that in the image above, and of course, you can try to sneak in between. But it is a one-way road tunnel, so I don’t recommend it.

They ask that you don’t go up late to respect the people living there as they are bombarded with people throughout the day and never have any peace.

There is a reasonable amount of parking at the top, with some extra spaces you can squeeze into. However, if you are coming in peak season in summer, I recommend going up early (before lunch) to avoid any issues.