Most Scenic Routes in Norway

Between its fjord-filled coastline, stunning mountain ranges, and endless forests, it is a hard place to beat and we think the best way of seeing is by following Norway’s scenic routes.

Join me as I take you through Norway’s top twelve scenic routes that span pretty much every part of the country from the south to the north. Choose your favorite route, rent a bike or a car and enjoy the amazing views along the way. 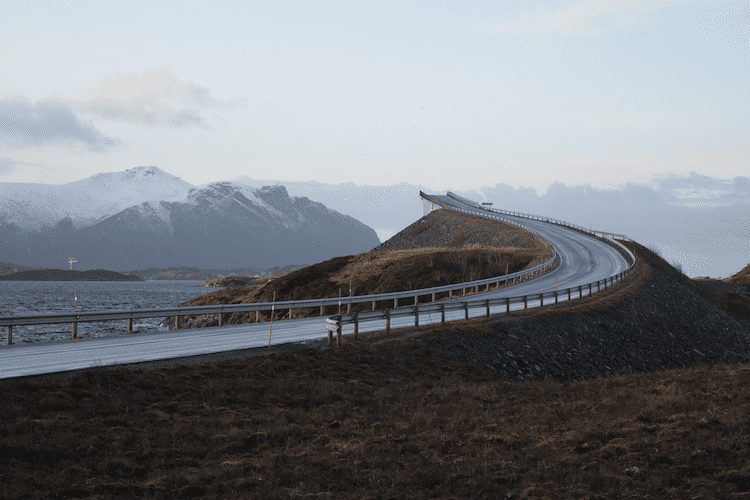 Atlanterhavsvegen, also known as the Atlantic Road or The Atlantic Ocean Road is a Norwegian scenic route of note, especially if you want endless views across the sea as you go.

The Atlantic Road begins in north-western Norway in Møre og Romsdal county, starting in Kristiansund it winds its way between islands and skerries, with many bridges, and takes you to Vevang and down to Bud.

The Atlantershavsvegan is recognized as one of the most scenic routes in Norway and you won’t find a scenic route that puts you closer to the ocean. On stormy days, the waves and wind blow the sea onto the road while on calm days, the views across the ocean and into the archipelago are mind-blowing!

You can travel down this scenic route by car or bicycle, and there is even a pedestrian-only footway along the side of it if you would prefer to walk. Along the way, you can stop to do some kayaking, diving, and join the locals fishing on the footway.

The reason this scenic route is known as the snow road is that the road is surrounded by steep mountains on each side that have snow on them most of the year.

What makes this one of the more special scenic routes is the diversity of the landscapes you’ll see on the way. It features everything from fjords to glaciers, blue lakes, mountains, and never-ending pine forests.

One of the highlights along the way is the Stegastein viewpoint, a modern platform that sits 650 meters above Aurlandsfjord and offers one of the most magical views in the area.

You will also go via the village of Flam which sits at the bottom of the fjord and is home to hundreds of ships that bring tourists on cruises into the area.

The scenic roads, high mountains, and views make this one of the best national scenic routes in the country.

The Lofoten National Tourist Route takes you through one of the most beautiful parts of Norway, the Lofoten Islands.

The Lofoten Islands sit in northern Norway inside the Arctic Circle and they are incredibly magical. Imagine tall mountains falling into turquoise blue water and fjords with one fishing village after the next to explore along with sandy beaches.

This is an amazing part of Norway to see the Northern Lights, kayak, go fishing, surf, see the midnight sun, walk the sandy beaches, and lots more.

This Norwegian scenic route takes you from the bottom of the Lofoten islands up to the top. Follow the E10 road across all the islands and enjoy the incredible scenery as you go from one island to the next.

To really enjoy this route, take a few days to complete it as you are in one of the most beautiful parts of the world, and you will not want to be leaving in a hurry. 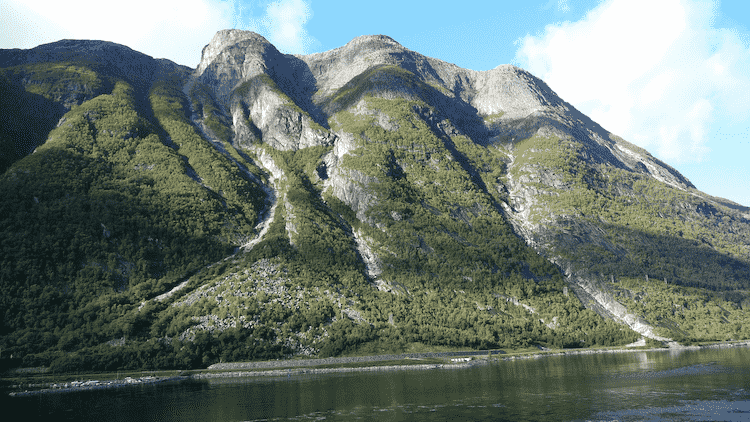 The Norwegian scenic route Hardanger, also known as the Hardanger National Tourist Route is located in the area of Norway simply known as Fjord.

The route follows the second deepest and second longest fjord in Norway called Hardangerfjord. The scenic Hardangerfjord is full of impressive landscapes that feature everything from glaciers to waterfalls and stunning mountains too.
‍
You can drive most of this route all year round and it is a long main road that goes on for 158 kilometers. You think this is a bit long for a scenic route but Hardangerfjord is actually 180 km long so you aren’t actually going to drive the whole thing.

‍One of the most spectacular parts of this route is when you cross the Hardangervidda mountain plateau as it provides you with some incredible views. This part of the road can be closed in the winter due to bad weather, so keep an eye on the forecast in the colder months.

The Norwegian scenic route Sognefjellet can only be driven in summer as the road is closed in winter due to snowfall.

Sognefjellet is the highest mountain pass in northern Europe as it connects the west coast of Norway with the eastern inland areas by cutting through the Jotunheimen mountains which sit 1,434 meters above sea level.

It is a very important road in regards to Norway’s historical development as it allowed for the transport of fish and salt from the west to east, and goods like butter from east to west.

The route is 108 kilometers long and starts in Lom and ends in Gaupne as you go you will see some of the highest peaks in the country, be able to see a natural stone amphitheater at Mefjellet, and magical views across the mountains as you go.

Depending on the time of year, you will either be driving through snow-covered mountains between banks of snow (Spring & Fall) or with open greenery in summer.

The Norwegian scenic route Ryfylke is one of the longer national tourist routes at 260 km long. It starts next to Lysefjord in the village of Oanes and runs all the way to Hårå in Røldal.

What makes this route so special is the mix of history, culture, and nature that can be found along the way. There are stunning villages, towns, old buildings, and things like abandoned zinc mines that date back to the 1800s which you will find in Allmannajuvet

Other highlights along the way include stunning waterfalls in Ryfylke, smelting plants in Sauda, and more.

Svandalsfossen waterfall is a must-stop along the way where you will find paths that allow you to see it from many angles. The mountains along the way are hard to beat too.

Being a long road, you are going to want to break this down into a few days and stay at some of the picturesque villages along the way. 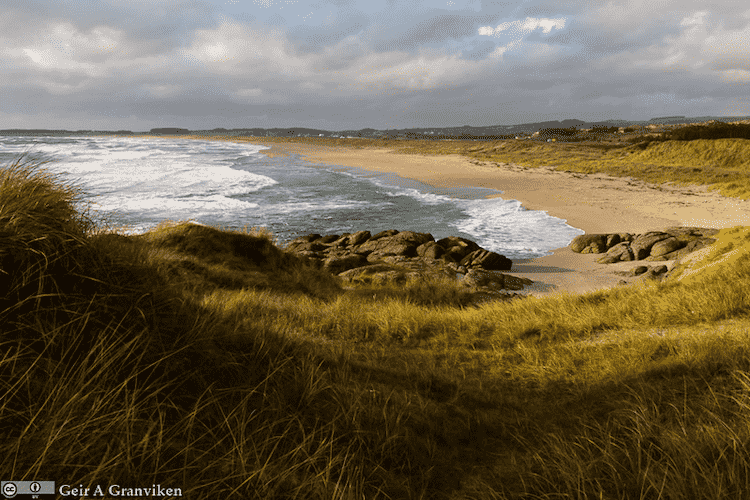 Image courtesy of Geir A Granviken

The Norwegian scenic route Jæren sits in the south of Norway along the north sea coast and runs through the main agricultural part of the country.

This route begins in Ogna and runs to bore. Along the way, you will see beautiful coastal landscapes with sandy beaches, pebble beaches, sand dunes, and more. Stop along the way for long beach strolls, picnics, and views across the ocean.

The route is just 41 km long with the coast on one side and ancient dry stone walls on the other. If you like to surf, head to Orrestranda beach where you can also hire gear and get surfing lessons too.

You should also stop at Kvassheim lighthouse along the way. It is open to tourists and dates back to the early 1900s when it was used to help ships navigate through the tricky waters in the area.

The longest of Norway’s scenic routes is Helgelandskysten which is a total of 433 km that also requires six ferries to complete. You may think that you have to drive this one but the route runs along very flat roads so it is a great one to bike on too.

What makes this one of the top Norwegian scenic routes is that it crosses the Arctic Circle, takes you past tall mountain peaks, deep fjords, the biggest tidal maelstrom in the world, the second biggest glacier in Norway, and into a UNESCO World Heritage Site archipelago.

The route starts in Holm, a small village, and follows Route 17 north to Bodo and into the Arctic. The ferry rides give you incredible views of thousands of islands under tall mountains, the sand beach and stone-vault bridge at Storvika Bay are magical, and the Svartisen glacier is hard to beat.

This is not a route that you want to rush and you’ll want to take your time to complete it so you can take it all in as you go.

The Geiranger-Trollstigen tourist route takes you around the Geirangerfjord, one of the most famous fjords in Norway. It is so stunning that it is also a UNESCO World Heritage Site and while the scenery is mind-blowing, that is not all it has to offer.

The road of Trollstigen that drops down into the port town of Geiranger is home to eleven hairpin bends, an iconic Norwegian sight. It continues along the fjord and it is worth stopping at Ørnesvingen and Flydalsjuvet, two amazing viewpoints with the best views of Geirangerfjord.

Other notable places that you must stop off at include Gudbrandsjuvet gorge which is packed full of drama and the Juvet Landscape Hotel.

Between the drama of the surrounding mountains, the amazing views, incredible landscapes, fjord views, and the lovely quaint town of Geiranger, this is one of the top scenic routes in Norway that simply can not be missed.

The Norwegian scenic route Senja runs across the island of Senja in northern Norway. It is the second biggest island in Norway and the route covers a total of 102 km when the 12 km detour is included.

It starts at Gryllefjord, takes you to Botnhamn, and if you want to include the detour, follow the road via Mefjordvær and Husøya,

You should spend a few days doing this route so you can enjoy everything the island of Senja has to offer. The island is covered in mountains that plummet into the sea, home to awesome hiking trails, magical views, and lots of quaint seaside villages.

Enjoy walking on sandy beaches, kayaking, fishing, going on boat tours, and lots more. This is also an excellent route to start a trip with as you can head down to the Lofoten islands and Andoya easily afterward.

Gaularfjellet is another awesome scenic route and is one most tourists don’t know much about which makes it a little more peaceful to explore.

The route is 84 km long and begins at the charming town of Balestrand and follows Sognefjord, the longest Fjord in the world and the deepest fjord in Norway, and then goes up into the mountains and ends in Moskog.

This route is home to magical views and you have to stop at the dangling Utsikten viewpoint. You will also follow a river that changes into waterfalls, rapids, and lakes. Skirting along the fjords is pretty incredible and the river offers some of the best trout fishing opportunities in Norway.

Be aware that this road is open during the summer, and most of it will be in winter too except for the section between Mjell and Mel which opens in April.

Andøya is an island in the north of Norway and one of the most western points of the country. Rumor has it that Andøya is home to the most beautiful beaches in Norway and following the Andøya tourist route will have you seeing the best of them.

Sitting at the end tip of the Vesterålen archipelago, Andøya is often compared to the Lofoten island but is much less busy and touristic. The route follows the west coast of the island offering views into the Atlantic, opportunities for swimming and kayaking, long beach walks, and lots more.

It is also a great place to see Norwegian nature at its best as you will have the chance to see whales, puffins, seals, and sea eagles.