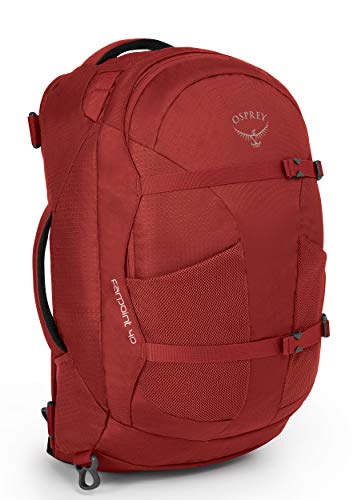 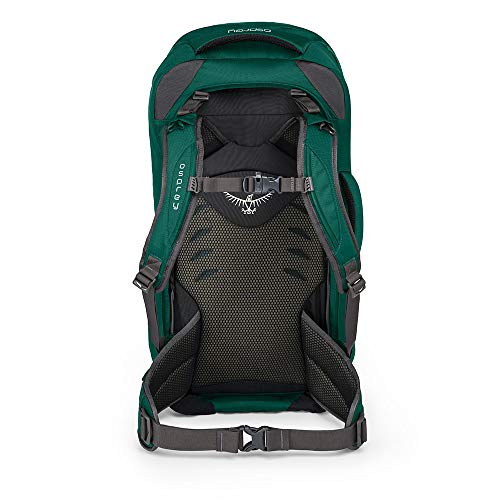 Osprey has long been known as an excellent brand that makes some of the best travel bags out there. There are several options to choose from, but one of the all-time favorites has always been the Farpoint. It's marketed as a carry-on, one bag travel option great for travelling around the world or just getting to any destination without being weighed down by too much luggage. It has a lightweight frame with big capacity that's great for both men and women to carry around on their travels.

Early 2017, Osprey launched another great travel bag in the form of the Osprey Fairview. It's been designed specifically for women, featuring a female-focused fit for a more comfortable carry. Since this bag's release, Osprey has begun marketing the Farpoint as a Men's bag, encouraging female travelers to take advantage of the updates on the Fairview. There are no groundbreaking differences between the two packs, but the subtle differences in their features make all the difference when you're carrying the bags at full capacity.

To properly compare these two travel bags, we’ll need to put them side-by-side. You can check out all of their main features in the table below:

Quick Navigation
A Detailed Comparison
The Main Differences
The Common Features
Should you go for the Farpoint or the Fairview?

At first glance, these packs look identical. The main difference though is the fit, which was really on the back part of the bags where the straps are.

Osprey has nailed the comfort aspect on its bags. When it comes to the Farpoint and Fairview, these bags definitely feel great as one-bag travel options.

The shoulder straps are generously padded and very breathable. On the Fairview, however, the straps are set lower on the back. This allows the bag to sit higher on smaller body frames, distributing the weight to fall on the hips.

Another fit-specific difference on the straps is the curve. On the Farpoint, the straps go straight over the shoulders. On the Fairview, the straps curve into the body a little bit then moves out at the bottom. Again, this is more comfortable for smaller body frames. The Fairview straps also have slightly more padding.

The hip belt is another feature that adapts better fit. The hip belt of the Fairview is a bit shorter, and also has a deeper curve. This allows the belt to hug smaller body frames tighter, sitting perfectly under the ribs on the waist.

The difference with the sternum straps are more of an update on the bag than a fit-specific feature.

If there's one thing that Osprey does right, it's absolute comfort. The Fairpoint and the Fairview feature LightWire Frame Suspension that distributes the weight from the back down to the hips. Even when fully packed, the backpack sits right on the hips that allows travelers to carry the bag over long periods of time without too much strain.

A nifty feature available on both the Farpoint and the Fairview is how the backpack straps are easily stowed away. (The Porter also has a similar option, which I have compared here.) A zippered flap on the back of the bag opens up to a compartment where you can fold in the backpack straps and the hip belt. When carrying the bag as a backpack, you can simply roll the flap and secure it via Velcro hidden on the bottom part of the bag. This is a convenient feature especially when checking the bag in or stowing it on the overhead bin during a flight. The hipbelt is bulky and cannot be detached, so having it flap around when you're not using it can be a bit bothersome.

The 40L version also has an included shoulder strap that you can attach to the side of the bag via the O-rings. This is a nice-to-have, but the bag really isn't meant to be carried as a duffel or messenger bag. When packed to full capacity, the bag is simply too big to handle. The O-rings are also situated on diagonally opposite sides of the bag, causing it to swing a little bit as it hits your body when you're on the move.

There are also two grab handles, one on the top and another on the side. Both are thick and padded and sturdy enough to pull the bag from the overhead bin or the luggage belt.

The Farpoint and the Fairview have three compartments.

The main compartment is a clamshell opening making it easy to pack and fill up all the capacity. There are two compression straps inside that keep items from moving around. On the lid is a mesh zippered pocket for organization. However, there are no other inside pockets. The bag is definitely very roomy and you won't necessarily need packing cubes, but using some or smaller pouches will get things organized. These are zipped by two big size 10 zippers that can be secured with your own padlock.

The second compartment has a laptop sleeve that can fit up to 15 inches. It has another zippered pocket that can fit a tablet, and a bit more space for some other items like laptop accessories or travel documents.

The third compartment is more like a pocket on the very front of the bag. It's called a slash pocket and lined so as not to scratch eyewear or other delicate items.

In front are two slip pockets that can fit a water bottle or some snacks.

While this is all great, the pockets and smaller compartments become slightly unusable when the bag is packed to its full capacity. While this characteristic is not necessarily unusual, there is a serious lack of pockets and storage options given the size of the bag. It would have been great to have more places to quickly drop in mobile phones or passports or boarding passes. You might need another bag to store all your necessities, unless you don't mind putting your bag down and opening up the compartments every time you need to pull something out.

The whole bag can be secured with two compression straps in the front to keep everything nice and compact. It straps over the two outer pockets and over the zippers. This helps secure your water bottle and makes it harder to access the zippers for would-be pickpockets.

Here's a great video by Osprey to show the Farpoint and the Fairview in action.

Should you go for the Farpoint or the Fairview?

While women shouldn't start going for "women's" items all the time, the Fairview definitely delivers on its fit-for-women promise. If you already have the Farpoint, then the bag will function just as well as the Fairview. However, if you're a female traveler or looking for something to give to a female traveler, the Fairview is a must-buy. The small changes in the fit, padding, and structure of the Fairview makes all the difference for female travelers and those with smaller builds who will be carrying this on their backs through long travels.

Credit must be given to Osprey in terms of color choices. The Fairview comes in Rainforest Green and Misty Grey - very manageable colors that won't easily get dirty. It's a refreshing departure from the usual pinks and purples of women's bags, and colors that don't stick out too much in a crowd of travelers.

Both the Farpoint and the Fairview are not the sleekest or most fashionable bags out there, but they are definitely some of the best travel bags you can have. If you're in the market for one bag to get you through countless destinations, then the Osprey Farpoint and Fairview should be the bag for you.