Palawan is a charming archipelagic province in the Philippines and a very popular vacation destination in the country. If you’re thinking of traveling to Palawan for a relaxing beach vacation, then you’re definitely in the right place!

This guide to the best beaches in Palawan is the only one you need to read to know exactly what to expect from this mesmerizing island. Whether you’re planning to do an island hopping tour of Palawan or just want to stay in one place for a while, you’ll find plenty of locations worth visiting below! 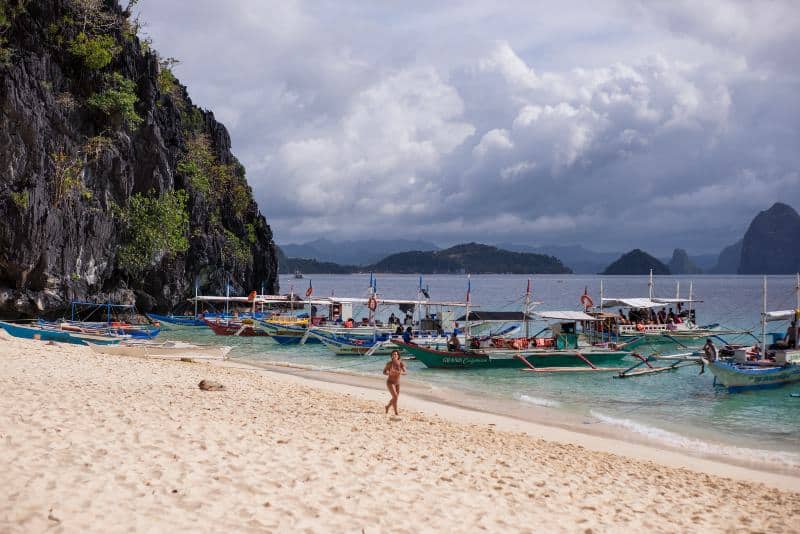 The Seven Commandos Beach is situated on the northwestern side of Palawan Island. It’s part of El Nido town, and it’s known for gorgeous white sand, turquoise water, and lush tropical vegetation that mostly consists of palms and coconut trees. El Nido is home to some of the best Palawan resorts, and it’s one of the most popular tourist destinations on the island.

This is a pretty secluded beach that can only be reached by boat, so it’s common to see boats docked in this bay. It’s worth noting that most boats visit this beach as part of island hopping tours, and they usually don’t stay here longer than an hour.

There’s also a three-star resort here, which is a good option for tourists who prefer privacy to crowds of population centers. The Seven Commandos Beach is a popular snorkeling spot on Palawan Island. There’s an abundance of reefs in the water just off the shore, and there are loads of attractions to explore on solid ground as well.

Nagtabon Beach is situated in Puerto Princesa, Palawan Island’s westernmost province. It’s easily accessible by cars and motorcycles, so it’s one of the best beaches to visit if you’re exploring Palawan Island on your own.

The beach is a vast stretch of sand with crystal clear sea and lush tropical vegetation. It’s absolutely pristine, and a great place for swimming, stand-up paddling, and even surfing, when the waves allow it.

Nagtabon Beach also features bars and restaurants, plus there are a few resorts in the area where you could stay for a while. Also, there’s an observation deck nearby, which offers breathtaking panoramic views of the beach and its surroundings. 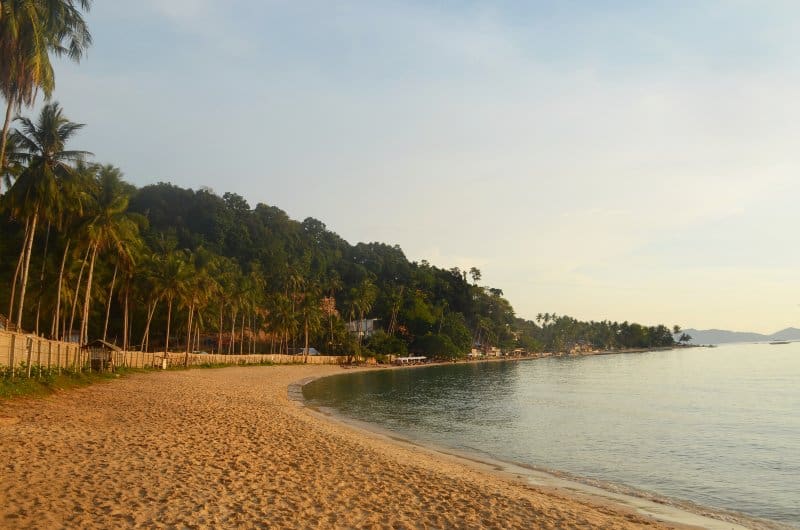 Las Cabanas Beach is another gorgeous white sand beach in the El Nido municipality. It’s situated in one of the busier areas of El Nido, with loads of resorts, restaurants, and stores near the beach. If you would like to stay in a part of Palawan that has gorgeous beaches but it’s not too far from the urban centers, anywhere near Las Cabanas Beach is a good option.

This pristine beach is like a small slice of paradise with white sand, crystal clear sea, and lush vegetation. It’s incredibly picturesque and a great place to admire a beautiful sunset in the Philippines.

Also, there are several bars and eateries on the beach, in addition to the many resorts. If you’re looking for beautiful beaches in Palawan that also have all the amenities and facilities you might need during the day, this is definitely one of the best beaches on the island to consider.

Sabang Beach is a beautiful sandy beach surrounded by a jungle. The views here are absolutely spectacular, and they get even better if you venture a little further away from the popular beach.

Sabang Beach is also where you will find the Sabang Boat Terminal, which offers rides to Puerto Princesa Subterranean River National Park. The underground river is one of the most popular attractions on this part of the island, and it’s definitely worth checking out if you’re already in the area.

The river cuts through a gorgeous sandy beach before it disappears into the caves and eventually underground. This quick boat trip is a once-in-a-lifetime experience, and one of the highlights of trips to Palawan, so don’t miss out if you find yourself in Puerto Princesa! 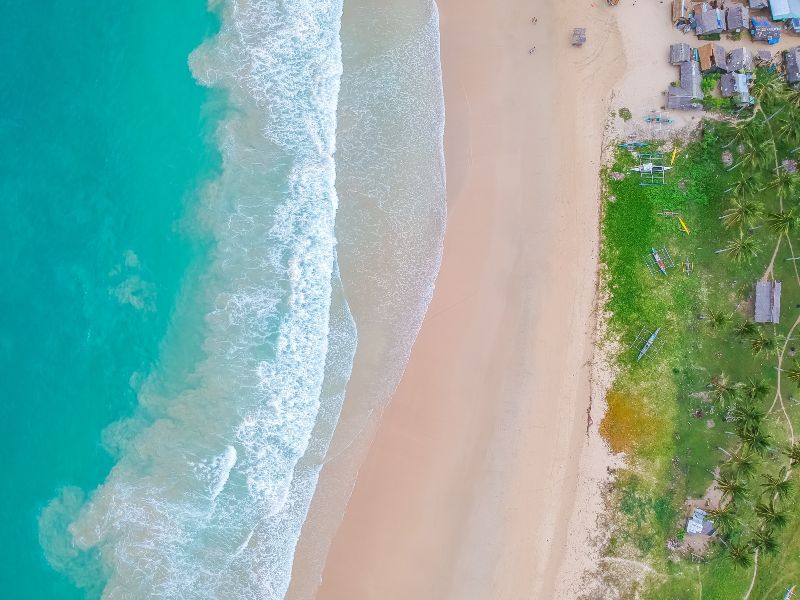 Nacpan Beach is a long beach in the northwestern part of Palawan Island. The southern part of the beach merges with the popular Twin Beach, which is also where the bulk of the resorts in the area are located. Most of Nacpan Beach is lined with coconut trees, for gorgeous views wherever you look.

This beautiful beach is very popular with tourists in Palawan, mostly because it’s easy to access and it has all the amenities you could possibly need. There are eateries and restaurants nearby, as well as ample hiking opportunities in the area. This beach is also close to El Nido, and it’s one of the most popular day trips from the urban center.

Additionally, there’s a spectacular viewpoint near the beach, which is a popular hiking destination in Nacpan. It offers breathtaking panoramic views of Nacpan Beach and its surroundings, and it’s definitely worth checking out if you make the trip to this fabulous Palawan beach.

Banol Beach is one of the best beaches on Coron Island, which is a very popular tourist destination in this part of the Philippines. The small white sand beach is not exactly easily accessible and the best way to visit it is to join an island hopping tour of the best Palawan beaches.

Tall cliffs, lush tropical trees, white sand, and crystal clear sea are the main things this mesmerizing beach is known for. There’s an entrance fee for the beach, but it’s symbolic and definitely worth it.

Another thing to note about Banol Beach is that it’s popular with divers, thanks to a sunken wreck on the right end of the beach. 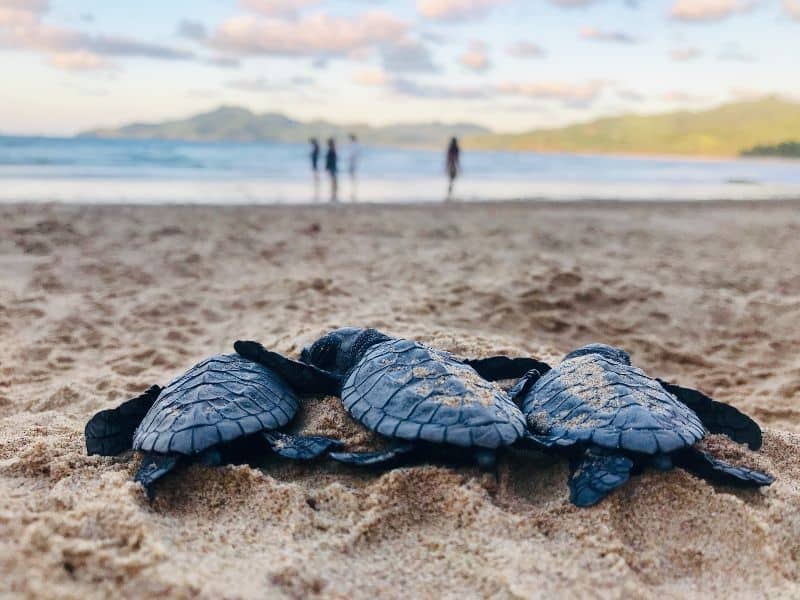 Duli Beach is situated in the northern part of Palawan Island and it is easily accessible from El Nido, the island’s main tourist hub. The beach is also far enough from the busy town that it doesn’t attract huge crowds, making it a great place for those who want to explore the beauty of Palawan, but would rather do so without dozens of other tourists in their way.

It’s entirely possible that you’ll have this gorgeous beach all to yourself, especially if you visit it early in the morning. Unless the waves are high – Duli Beach attracts quite a few surfers, thanks to excellent conditions that make it a great beach for surfing. There’s even a surf shack on the beach where you can rent equipment during peak season.

There are also a few restaurants at the southern end of the beach, as well as a laid-back resort. The closest town is just a 20-minute walk away, plus there are plenty of hiking opportunities near the northern side of the beach.

Marimegmeg Beach is a popular beach in El Nido, situated north of Las Cabanas Beach. It’s known for golden sand, tall palm trees, and an abundance of beach bars that make it a prime location for beach parties. There’s only one resort on the beach, and it’s worth checking out thanks to the beautiful botanical gardens and reefs in the sea.

There are also several restaurants in close proximity to the beach, including a McDonald’s – a Hail Mary for all tourists who don’t like seafood but end up in the Philippines.

Marimegmeg Beach is also a very popular location for viewing sunsets, so definitely plan an evening visit if you can only spend a short time at this mesmerizing sandy beach.

The Hidden Beach is a remote beach in El Nido, and it’s one of the most popular destinations for island hopping tours in Palawan. The beach is situated on Matinloc Island, which is a small island off the west coast of Palawan. It’s not exactly easy to reach on your own, so consider joining an island hopping tour if you want to experience this stunning beach.

With tall cliffs, caves, sand, and crystal clear sea, there’s a lot to love about this beach. Snorkeling is also popular here thanks to the rich marine life, so be sure to bring your diving equipment when you’re visiting the Hidden Beach in El Nido.

It’s worth noting that you will most likely need to book a tour to visit this beach because it’s quite far away from Palawan Island. It’s worth the time and money without a doubt since it’s such a unique location in the Philippines.

Talaudyong Beach is a spectacular stretch of sand in Puerto Princesa. Situated on the western coast of Palawan Island, this beautiful beach is known for the azure sea, lush vegetation, and white sand.

It’s a beach without any facilities though, so it’s not the ideal place for families with children. This is also the reason why Talaudyong Beach is much more popular with locals than tourists, making it a great place for all travelers who prefer to avoid overcrowded beaches.

Just keep in mind that you should bring everything you think you might need if you plan to stay on this beach for more than an hour or two. There aren’t any restaurants in the area, and the resorts that are close to the beach are mostly run down, although it’s worth noting that new resorts are under construction.