Kinabayo festival is an amazing event on Dapitan City’s social calendar. The event is held every year, with tourists thronging to this location.

While Dapitan City is best known for its amazing history as home to the location where national hero and symbol of struggle, Dr. Jose Rizal was exiled, it is also home to amazing festivals such as Kinabayo. Dapitan is one of the few predominantly Catholic cities in the Mindanao region of the Philippines, and every year, almost 95% of the 75,000 residents of the city take part in a mix of traditional and exotic celebrations for the Kinabayo Festival.

History of the Kinabayo Festival in Dapitan

Kinabayo festival is held to celebrate the Patron Saint, St. James the Greater. At the core of the festival is the reenactment of the Spanish-Moorish wars, the Battle of Clavijo, previously known as the Battle of Covadonga in 722 AD.

During this war, St. James the Great (also known as Senor Santiago in Dapitan) was said to show an apparition riding a horse and holding a sword. He was leading the Spanish to victory against the Moors. This story was adapted in Dapitan, which used to be overrun with Moorish pirates. When the Spanish Jesuit missionaries arrived, they sought the help of St. James the Greater to defeat the Moors. The Christian defenders were victorious against the Moorish pirates.

While the festival started as a religious affair, it has since evolved into a social and economic event that has successfully weaved the local chapter into the soul of Kinabayo. Add to this the distinct historical events within the city and you have a clearer picture of what this festival entails.

The Month-long Celebrations of Kinabayo Festival 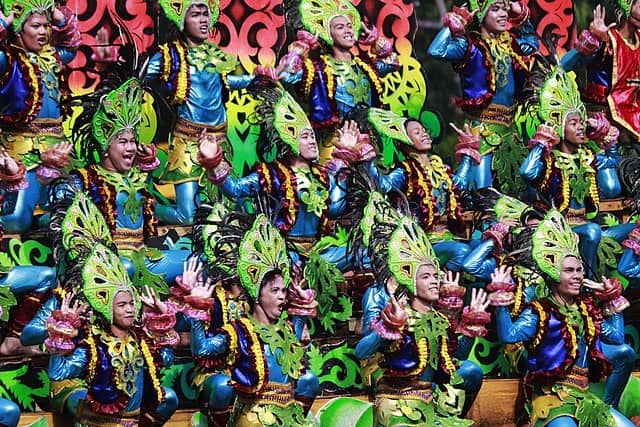 If there’s one thing about Filipinos, they know how to party. The Kinabayo Festival is so celebrated that the city spends a whole month staging programs and activities in honor of their patron saint.

Most Philippine festivals begin with a celebratory mass. At the Kinabayo Festival, however, every afternoon of every day from the beginning of the festival is filled with prayers. At 5:00 PM, the community prays the rosary, followed by a 30-minute novena. The Holy Mass is held at 6:00 PM. On the 25th of July, the official feast day of Senor Santiago, a Holy Mass is held every hour from 4:00 AM. The Pontifical Mass is held on the same day at 10:00 AM.

A new addition to the celebration that began in 2018, the Fluvial Parade symbolizes Senor Santiago’s journey around the world to spread the Word. He was martyred in Jerusalem and his remains were sent back to Compostela in a boat. The Fluvial Parade happens on July 24 and starts from Dipolog City. Locals send off the boat to Dapitan to the beat of drums. As the parade nears Dapitan, Dapitanos cheer and chant to welcome Senor Santiago to their shores. 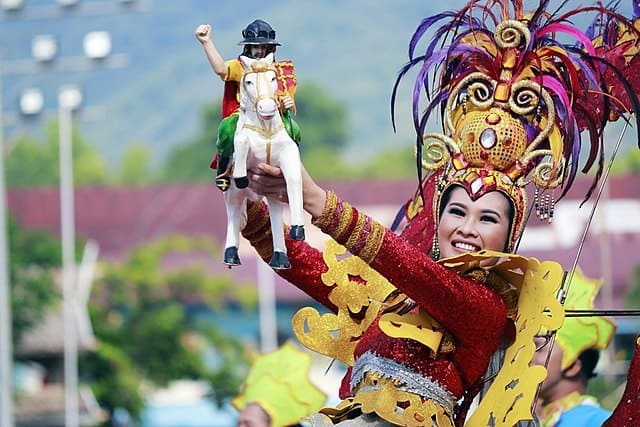 This festive welcome is called “Patunob”. Devotees welcome their patron saint while waving “parpagayo” or San Franciscan leaves. The Dapitanos then parade the statue of Senor Santiago to church and continues with the Sinug and Loa, the storytelling of the saint’s life and works. This is a parade of dancing with locals dressed in colorful outfits. 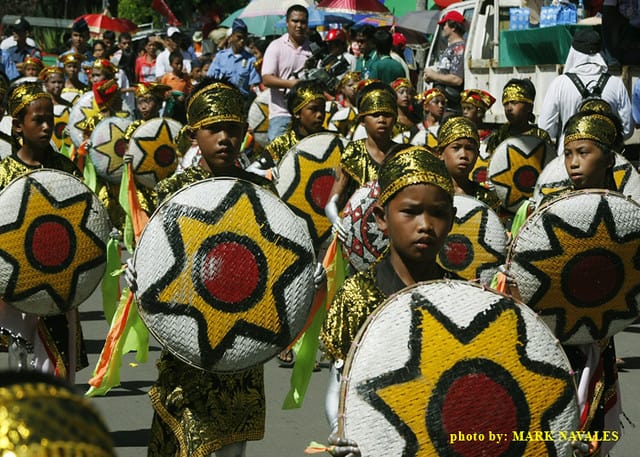 Photo by mark navales on Foter.com / CC BY

On July 25, a group of horsemen head the parade, followed by contingents of the street dance competition. Different groups from Dapitan perform on the streets, each one with a muse holding a statue of their beloved saint.

The performers are dressed to represent either the Christian troop or the Moorish soldiers. Each one is riding “horses” made of bamboo and rattan, thus the term “kinabayo” (kabayo is the Filipino word for horse). Each group re-enacts the fight between the Christian saviors and the Moorish pirates. An actor dressed as St. James the Greater arrives on a white horse, brandishing a sword and defeating the enemy. This is then followed by a bellowing chant of “Viva Senor Santiago!”

There are sports tournaments, dance competitions, and beauty pageants held throughout the month. There are also several motor events such as drag-racing, motocross, mountain bike races, speed trail race, war games, skydiving exhibitions, horse races, regattas, and jetski exhibitions. Needless to say, it’s a very busy month filled with a lot of festivities that locals and visitors look forward to every year.

Getting to the Kinabayo Festival

Dapitan City is in Zamboanga Del Norte in Mindanao. While Mindanao has earned a less-than-pleasant reputation for civil skirmishes and violence, there are cities in the southern island that remain safe and open to tourism.

From Manila, the entry point will be Dipolog City via flights from Cebu Pacific of Philippine Airlines. There are daily flights and schedules are easy to arrange.

From Dipolog Airport, head to the Dipolog Bus Terminal and catch a bus to Dapitan City. The fare is around Php 100 (USD 2) and travel time is half an hour.

Once in Dapitan, you’ll be welcomed with hundreds of decors and banderitas leading you to the city center.