Mayon Volcano goes by many names – Magayon, Monte Magayon, Mount Mayon – but is best known for one thing: its almost perfect cone-shaped tip. Rising to 2,462 meters above sea level, this majestic volcano towers above its hometown of Albay, a clear distinction from the flat Albay plains.

Part of the mountain’s prominence can be attributed to its frequent volcanic activity that is evident with eruptions coupled with the production of volcanic ash. There have been various eruptions in the past, some of which have been very tragic. While it’s been some time since the last eruption, visitors are always advised to check with local authorities on any sign of volcanic activity.

The Legend of Mount Mayon

As beautiful as it may be, the myth behind the creation of Mount Mayon is as heated as the earth underneath.

According to legend, there once was a beautiful princess named Magayon, daughter of Chief Makusog. Many men from far-flung places visited their home in Ibalon just to gaze at Magayon’s unparalleled beauty. One of these men was Patuga, a warrior chief from Iraga. Patuga brought Magayon all kinds of gifts and offerings in a bid to win her hand in marriage, but nothing swayed Magayon.

One day, while bathing in the Yawa River, Magayon slipped on a rock and fell into the water. As she didn’t know how to swim, she called for help. Ulap, a young man passing by, heard Magayon and saved her from drowning. Since then, Magayon and Ulap began a blossoming relationship, until such time that Ulap went to Chief Makusog to ask for Magayon’s hand. Seeking his daughter’s happiness, Chief Makusog granted Ulap permission.

News of the engagement reached Patuga, which angered him. Patuga then invaded Ibalon and kidnapped Chief Makusog, threatening Magayon to kill her father if she didn’t marry Patuga instead. To save her father, Magayon agreed to marry Patuga. On the day of their marriage, Ulap, still deeply in love with Magayon, went to the place of the wedding to try to take Magayon away. A battle ensued between Ulap and Patuga. In a heated row, Ulap laid down a fatal strike and killed Patuga.

Overjoyed by victory, Ulap and Magayon ran to each other’s arms, but Patuga’s loyal followers were not pleased. A poisoned arrow hit Magayon, and as Ulap leaned over his dying lover, one of Patuga’s soldiers stabbed him in the heart.

After the battle, Chief Makusog decided to burry Magayon and Ulap together. Throughout the years, the land in which the lovers were buried began to rise, so much so that it rose to become what we now know as Mount Mayon. It’s believed that when Mount Mayon is about to erupt, Magayon is being bothered by Patuga. When the volcano is calm, Ulap is holding Magayon in a warm embrace.

What to do around Mayon

Thrill-seekers looking for an adventure can conquer the volcano during its inactive period. With the help of local guides, visitors can enjoy a trek up Mount Mayon. Prior to this, however, it’s important to ascertain the warning levels before determining whether or not to go on with the trek.

As a safety rule, the Philippine Institute of Volcanology and Seismology advises trekkers not to ascend past 1800 meters. This is because the concentration of sulphuric gases is increased, posing a health risk to trekkers and guides alike. 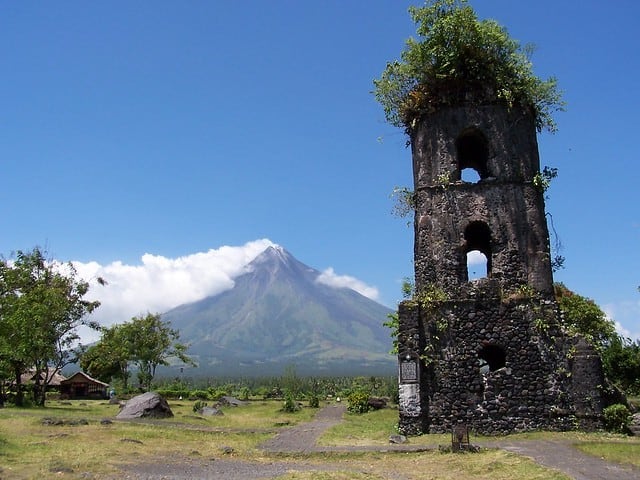 View from Cagsawa. Photo by Chris & Anya on Foter.com / CC BY

The volcano can be viewed from almost anywhere in Albay due to the flat landscape of the city. There are several areas to get the best views, but the best and up-close view would be at the Mayon Volcano National Park. Within the park is an observatory with information about the volcano itself.

Other areas for viewing are Lignon Hill, Cagsawa Park, or the Boulevard.

Wherever you decide to gaze at the volcano, timing is key. Most of the time, the tip of the volcano is covered in clouds. The best time to see the volcano unobscured is first thing in the morning.

Get up-close and personal with Mount Mayon through an ATV tour at the base of the volcano. The ATVs follow a path of dirt, gullies, streams, and fallen rock. Due to the rich volcanic soil, the path is also lined with lush palm trees and other foliage. Closer to the volcano, however, the scene drastically changes. The foliage thins and transitions into huge boulders, almost like being on an alien planet.

The most difficult trail takes adventure-seekers to an elevation of 640 meters, formed by hardened lava from the 2006 eruption. Check out the other tours and trails from Mayon Sky Drive.

If the ATV tour is not enough, you can also ride a 300-meter zip line right at the base of Mount Mayon. It’s a great way to end your exploration of Mount Mayon as, after your hike, you will have the option to trek back or ride the zip line. Each ride costs a mere USD 6. The zip line option will also be included in your ATV tour.