Most Popular Drinks In China

While Chinese food has a global reputation, and you’ll find Chinese restaurants in almost every town in the world, Chinese drinks tend to be forgotten about. China has a range of delicious and refreshing drinks ranging from yogurt drinks to alcoholic beverages, and all of them are worth trying.

Join me as we take a look at all of the most popular drinks in China from drinks used as traditional Chinese medicine drinks to popular soft drinks you find lining all the shelves of a shop in mainland China. 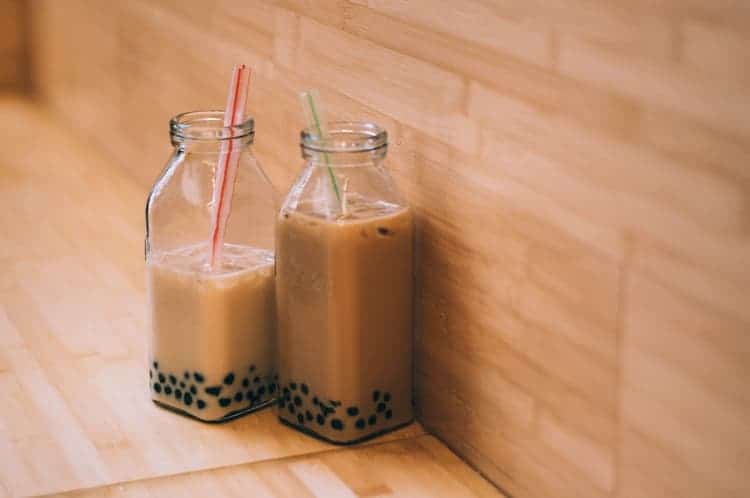 One of the most popular Chinese drinks that have gone global quite recently is Bubble Milk Tea or Bubble Tea as it’s usually referred to. Bubble Tea, also referred to as Pearl Milk Tea, is made by combining sweet milky tea with bubbles or pearls. The bubbles or pearls are made from tapioca and are soft and jelly-like adding quite an interesting but addictive bitter aftertaste texture and taste to the sweetened milk tea.

This Chinese drink, Pearl Milk Tea, actually originated in Taiwan and is the most popular drink of young people in China. Its popularity took it around the world and you can now find local teahouses around Europe and the United States that sell the tea.

This soothing drink comes in a range of colors and fruit flavors and is served hot or served chilled depending on your preference. You’ll be given a wide straw that allows you to suck up all the yummy tapioca bubbles while you drink it. 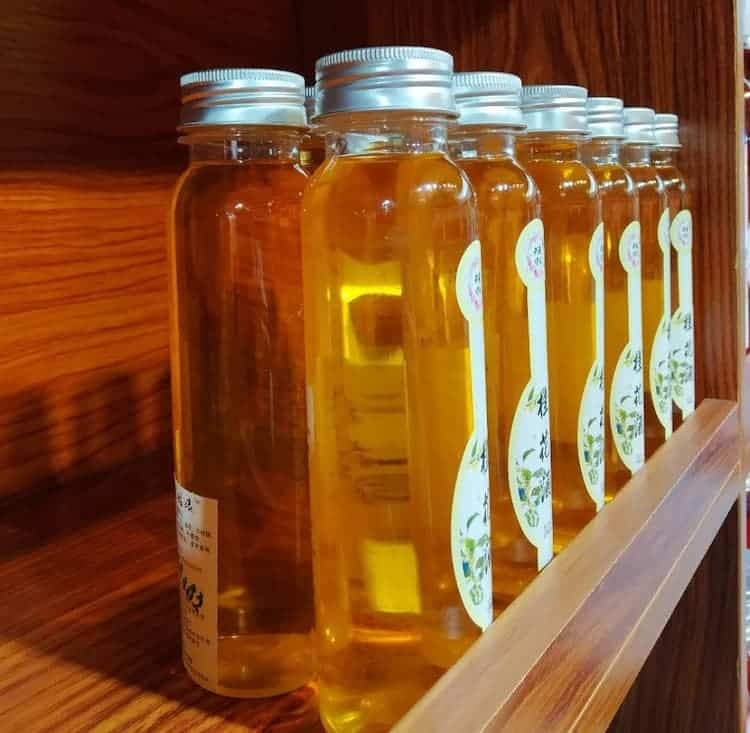 Osmanthus Wine is pretty much an unfiltered fermented sweet rice wine and is a very popular Chinese rice wine all over the country. But, it does actually come in a few different forms.

It’s made by combining the unfiltered rice wine together with Osmanthus flowers that bring out the flavor. This drink is best tried in restaurants as it’s traditionally made at home by families and the best wine you’ll find is at one of the many restaurants in China.

You can also find some famous brands of rice wine in convenience stores too. The best place to drink this wine is at the Dongzhi festival which is referred to as the “arrival of winter” where street stalls sell the best wine around.

Osmanthus can also be served as a sweet liqueur which is a delicious after-dinner drink. It’s super sweet but the taste and scent of the Osmanthus make it super yummy. 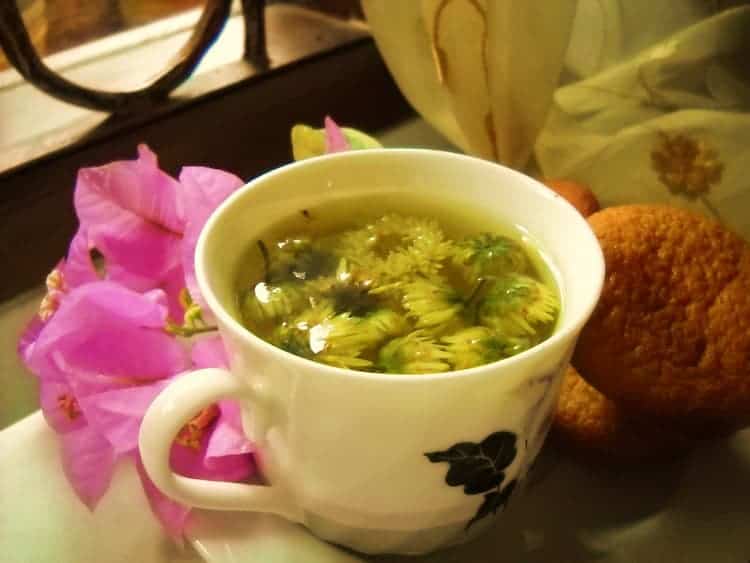 Chrysanthemum Tea is a herbal tea that is also about as pretty as a tea can be. This particular brew is made by adding an entire ​​Chrysanthemum flower into hot water leaving the whole flower for all to see.

Chrysanthemum Tea doesn’t taste much but drinking this tea has a lot of health benefits including a reduction in cholesterol, detoxifying your liver, aiding digestion, and soothing a cold. It’s much nicer if you add some honey or sugar to this tea as it gives it a bit more flavor.

You can find this tea at pretty much all Chinese restaurants and teahouses and if you visit China and love tea, you should head to the tea plantations in the regions of Hangzhou, Mount Huang, and Hubei.

Suanmeitang is one of the most popular selling bottled drinks in China and it’s great for drinking while you’re eating spicy Chinese dishes. Suanmeitang is made from sour plums as is usually enjoyed during the summer as it’s both a cooling and soothing drink.

This fizzy carbonated plum flavored drink is made from a combination of sour plums, licorice root, hawthorn, rock salt, and sweet osmanthus. This creates a sweet-sour taste that not only smooths but also complements spicy food too.

While this is a summer soft drink, you can buy it all year round in many forms at any of China’s convenience stores. It’s produced as a powder, in liquid concentrate, and fresh in glass bottles.

You can also order this fizzy fruit juice drink in a restaurant to help you enjoy some of China’s spicy yummy food. 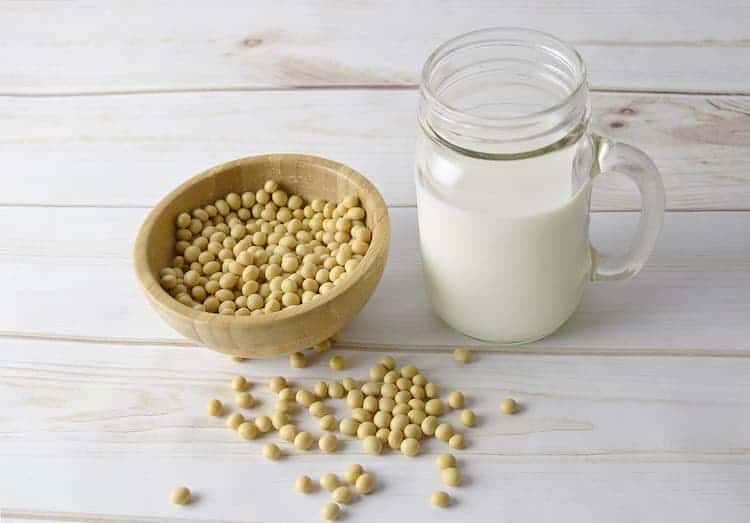 Soybean Milk is pretty much China’s version of a protein shake and lots of people enjoy drinking this beverage in the morning. This beverage is traditionally made at home by using a milk machine that extracts the milk from the soybeans.

Since soybeans are hugely popular in East Asian Cuisine, it’s not surprising that they are used in some kind of drink. It’s not just these beans that are used in this drink it can be a mixture of beans, depending on which kind of China’s version of a protein shake one’s looking for.

Soybean milk tastes very natural with some sweetness and is a healthy alternative to real milk. You can drink it hot, boiled, cold, and fresh, or with sweetness or savory tastes. You can find it at almost every breakfast stall and there are popular brands in the shops such as Vitasoy. 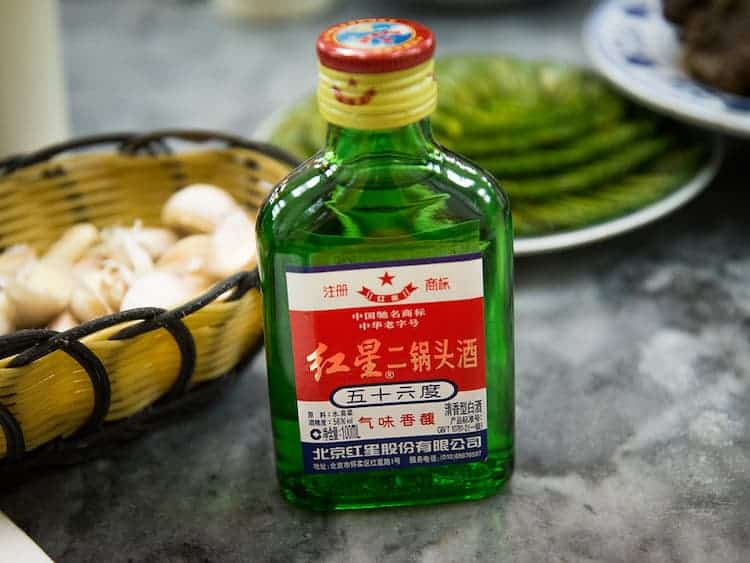 China’s most affordable and probably most popular alcoholic drink that you can pretty much buy anywhere is Baijiu. Baijiu’s alcohol content can range from 35% to 60% depending on the bottle you buy, hopefully, it has a 35% alcohol content.

Baijiu is quite horrible as it tastes like gasoline but it gets you drunk quickly for very little money, which is kind of the whole point. This alcohol is usually drunk in drinking games, special ceremonies, and toasting.

Beware though as if you drink too much of it you can quite quickly have no idea where you are and standing up can become quite a task.

Baijiu is a distilled spirit that is usually made from grains such as sorghum that will kind of destroy your taste buds but the alcohol content will set your evening off in the right direction. Just drink one shot or two, not too much more. 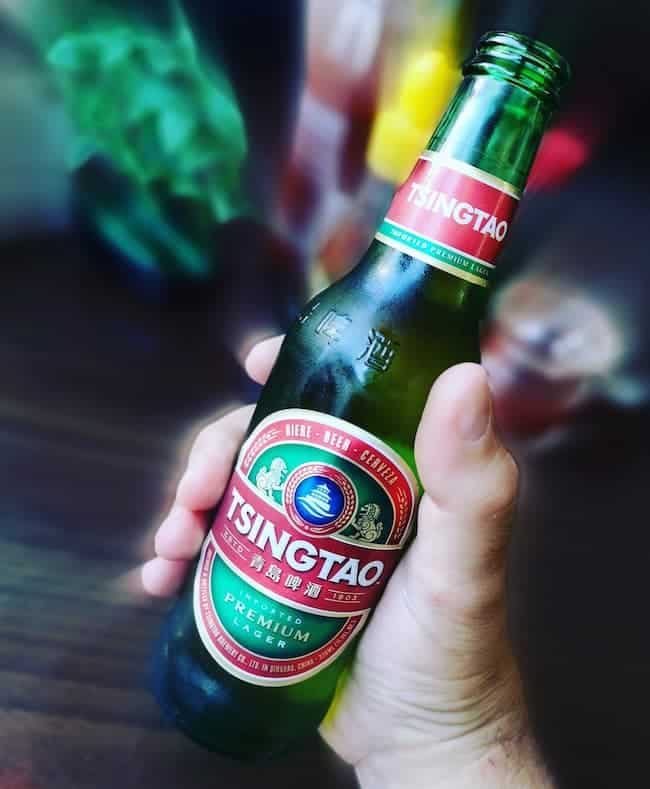 Qingdao beer doesn’t describe an actual brand of Chinese beer but is a beer made in the seaside city of Qingdao. This German-style beer is made using imported barley, hops, and yeast in combination with delicious spring water from the mountain areas in Shandong and Laoshan provinces. ‘

The most recognized Chinese beer brand that serves up Qingdao beer is Tsingtao beer. Tsingtao beer is a bit like an American dark lager, super refreshing with a high malt flavor with a lovely after taste. You can find these beers pretty much anywhere in China from all the restaurants to grocery and convenience stores.

If you like your beer then having a few Tsingtaos is a great way to start your Friday or enjoy a sunset over the sea in Southern China. There are some other great beers in China too including Xinjiang black beer and Sinkiang black beer.

Mai Dong is something you will find in any shop and it’s pretty much China’s version of fruity vitamin water. People love drinking it after exercise as it has a soothing effect on the body.

It pretty much tastes like a watered-down juice drink as it has a hint of sweetness that means it’s not only yummy but it helps rehydrate the body at the same time.

While this is a mass-produced Chinese beverage that Chinese people love, it’s not quite the herbal remedy-style beverage that you might expect in China. 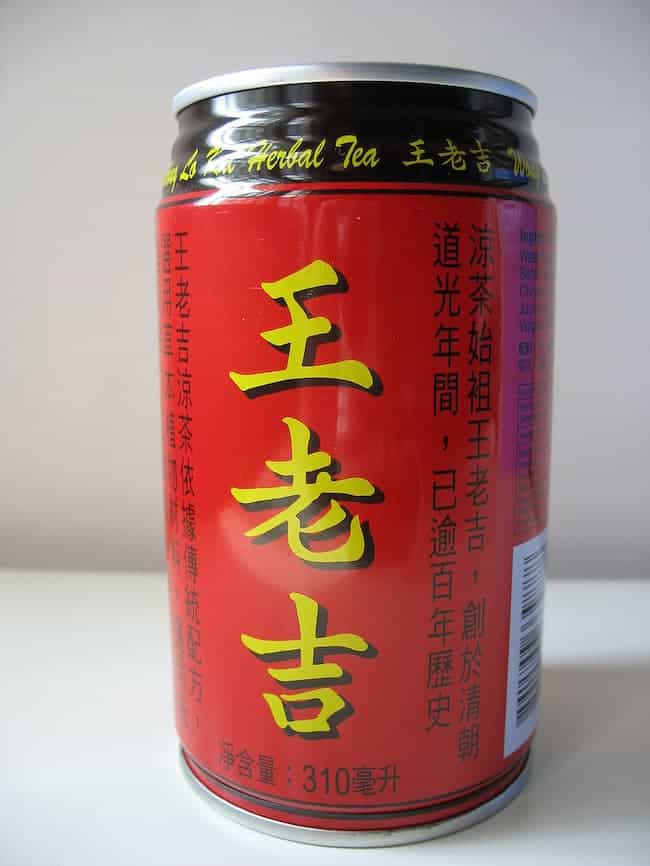 Wang Lao Ji Tea is a very healthy tea and is pretty much a Chinese version of green tea or black tea since it’s so popular, but it doesn’t have caffeine. When you’re shopping for teas in China, you’ll find Wang Lao Ji Tea in red cans as it’s referred to as “the tea in the red cans” by ex-pats.

The ingredients in Wang Lao Ji are quite varied depending on the brand you buy but can include all these herbs: Mesons Chinesis, Plumeria Rubra, Microcosm Paniculate, Chrysanthemum, Lonicera Japonica, Prunella Vulgaris, and Licorice.

This mixture of dried herbs is then combined with hot water and served with brown sugar for some sweetness. It’s particularly smooth when paired with spicy food and is soothing too. It’s also super healthy and great to sip on when sick or during winter to stave off illness. 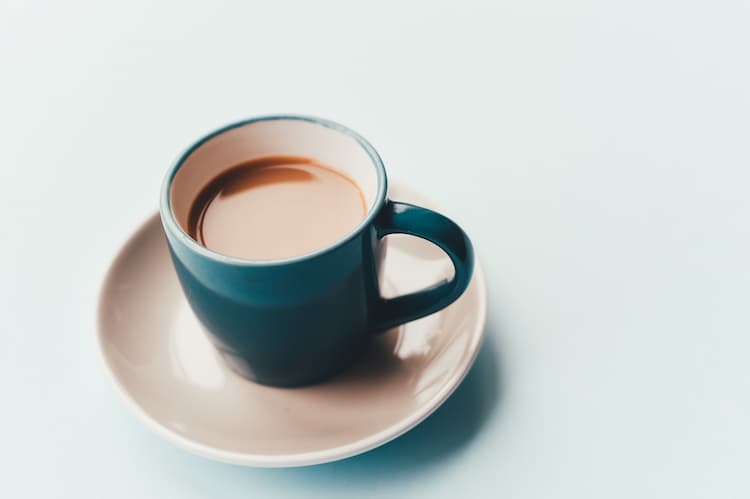 Coffee has become more and more popular in China and all the coffee beans grown in China come from the province in Yunnan in southwest China. Yunnan doesn’t quite grow all the coffee in China but it does produce 98% of it.

One of the top coffee brands from Yunnan is Aini which makes a delicious cinnamon blend that is hugely popular and even got Starbucks’ attention. Starbucks partnered with AiNi to put Yunnan coffee as a “coffee of origin” Starbucks stores and has been in them ever since 2017.

While you might not have expected the coffee to be one of the drinks made and drunk in China, it is and you should definitely try some of it while you’re there.