Smallest Hotels In The World (Not For The Claustrophobic)

There’s something charming about small rooms and tight spaces – as long as you’re not claustrophobic that is. The whole concept of tiny living is transforming the hotel industry, with more and more options that focus on providing you everything you could possibly need in the smallest space possible.

The main advantage of these hotel rooms is the price – they’re cheaper than all other accommodation options, meaning you can always stay in the hottest locations without spending all your money.

From literal sleeping boxes to hotel rooms that feature four beds in a space of three square meters – here are the smallest hotels and hotel rooms in the world! 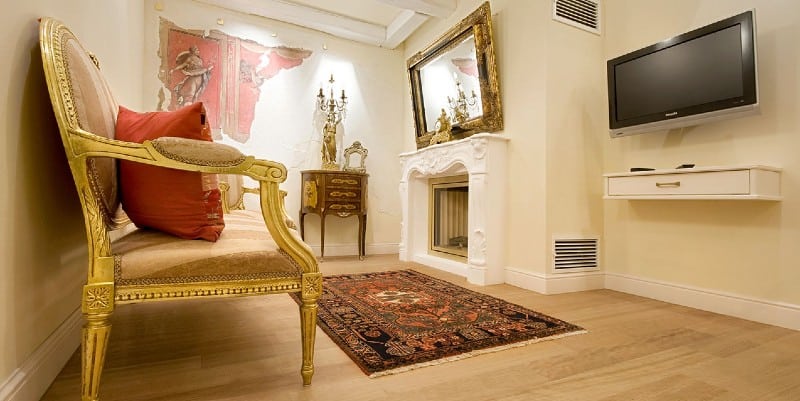 The Eh’häusl hotel in Amberg, Germany holds the Guinness world record for the smallest hotel in the world, so it’s officially the winner in this category. There’s no doorman or reception though – you’ll be handed the keys when you arrive, and the entire hotel is yours!

This is definitely not an option for families, since there’s just one bedroom in the hotel and it barely fits a double bed. The interesting thing about the world’s smallest hotel is how extravagantly it is decorated. Everything in the hotel is luxurious, from the whirlpool tub in the bathroom to the golden frames and statues in the hallway.

The price reflects the lavishness of the furniture – a day in the smallest hotel in the world will set you back about 240 Euros. 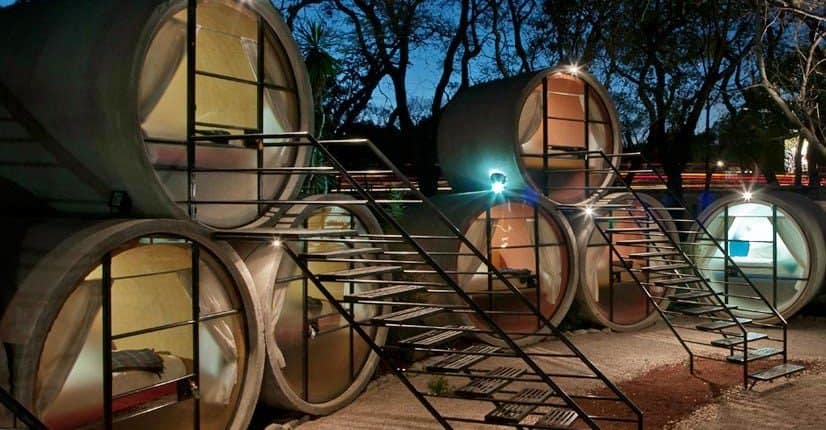 Tubohotel is a unique take on an outdoor capsule hotel. Hotel “rooms” are concrete tubes arranged in pyramids, in a vast outdoor area. Your room features a mattress and some pillows, and that’s about it. There are curtains inside that you can pull over the glass door, so you can still have some privacy in your tube.

The unique tiny hotel is in Mexico’s village Tepoztlan, Morelos. It is very close to Archaeological Zone Tepozteco that features ruins of a small Aztec temple from 1200 C.E., which is certainly an interesting sight. There are also a lot of walking trails in the area, and Mexico City is about an hour’s drive from Tubohotel. 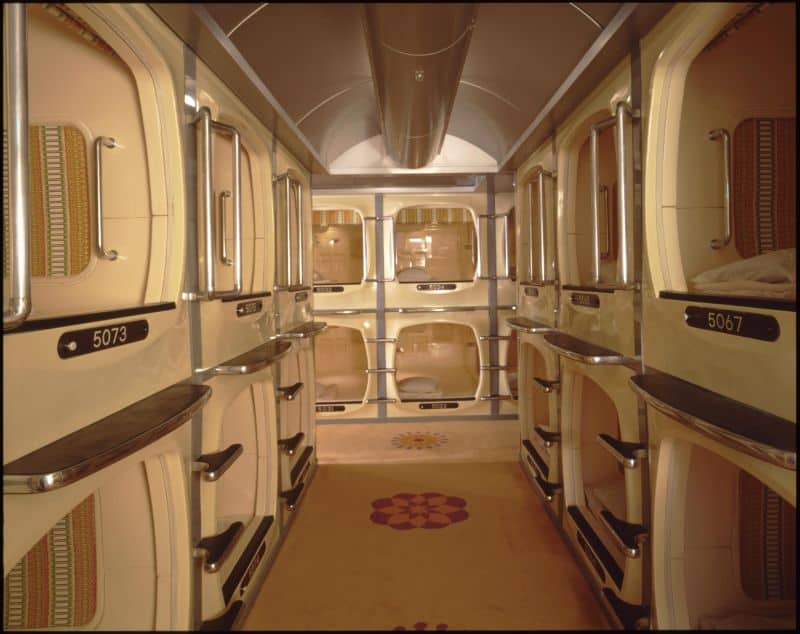 Osaka’s Capsule Inn is the first capsule hotel in the world. It opened in 1979, and it’s been improved significantly since then. Nowadays the hotel offers three types of capsules as well as private rooms, and they all vary in size and amenities provided. The deluxe capsules even come with private showers, which is perfect for people who don’t mind the tight spaces but really hate sharing bathrooms.

One thing to note about the Capsule Inn is that only men are allowed to stay. Also, people with tattoos are banned from the hotel, as is the case with a lot of places in Japan. 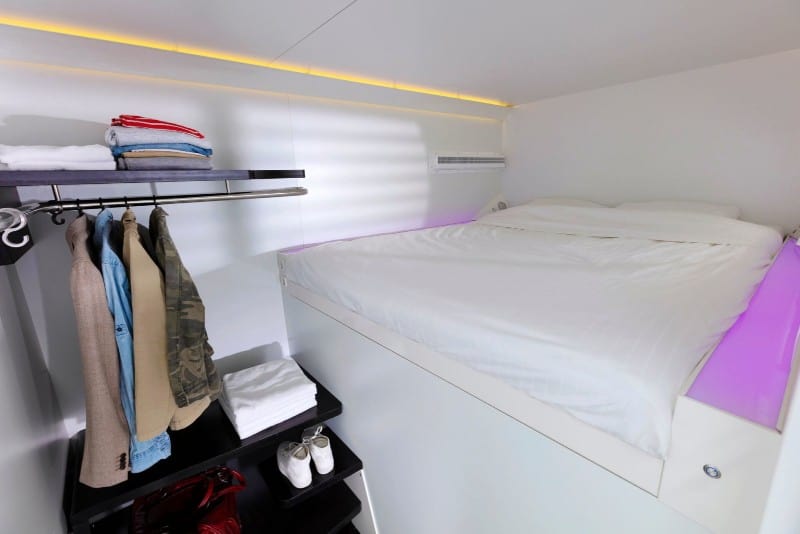 CityHub Amsterdam is a modern take on a capsule hotel. It’s actually possible to stand up in your room, and apart from the bed, there’s also a wardrobe area and shelves that function as a small desk. A “room” in this hotel equals about three “rooms” in Japan’s capsule hotel, so you see just how much bigger these are.

This hotel is great because it’s very affordable, and that’s not something I can say about a lot of other accommodation options in Amsterdam. Especially since the hotel is in the city center, just a few minutes away from the Anne Frank House. 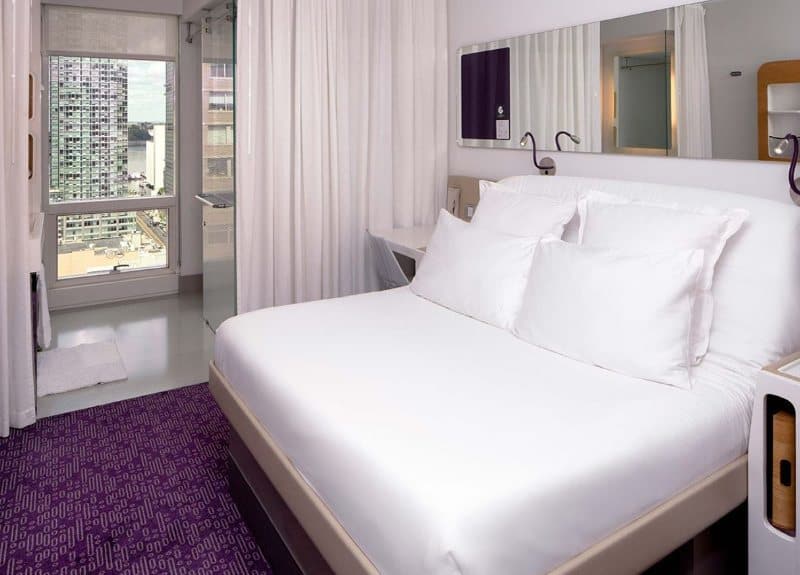 The Yotel is a micro hotel in multiple locations, but I’m focusing on the one in Manhattan here. It’s close to Times Square, so the location is absolutely spectacular. The micro hotel features really small rooms, but they’re equipped with all the necessities you might need for a comfortable stay.

However, the bathroom area is basically in the room – there’s a curtain that separates the two spaces, so keep that in mind.

This is actually a great hotel for people who just need a place to sleep and shower during their stay. The beds are actually really comfortable, and the shower is more spacious than the closet! Also, you have spectacular views of Manhattan even while you’re in the shower or on the toilet, and that’s really great. 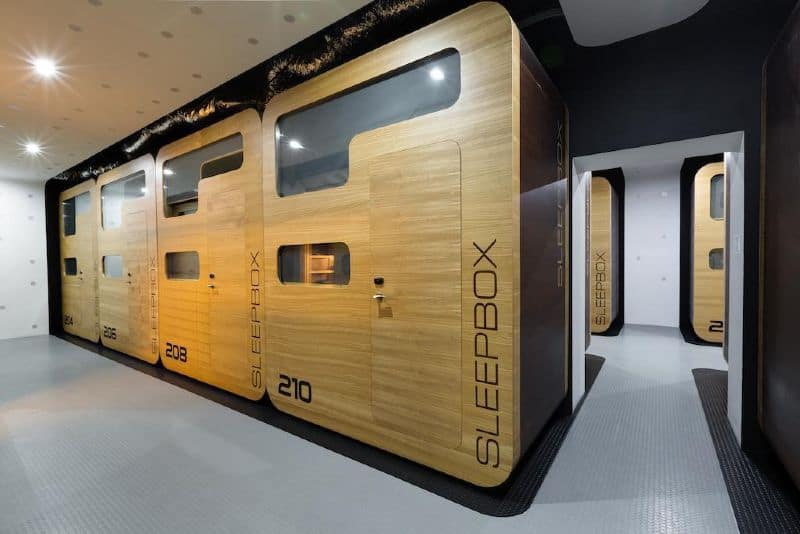 The Sleepbox Hotel is the first capsule hotel in Moscow, and it’s certainly a unique option. Hotel “rooms” are actually sleepboxes that feature a bed inside, and not much else. You get a dresser and a couple of shelves, and that’s about it.

The Moscow hotel might be the first of its kind in the city, but it’s certainly not unique. In fact, you can find sleepboxes all over the world, and they’re quite popular in large airports. You can usually rent them on an hourly basis, and they’re perfect for a quick nap before your next layover. Also, the sleepboxes are soundproof, which makes them perfect for loud and busy airports. 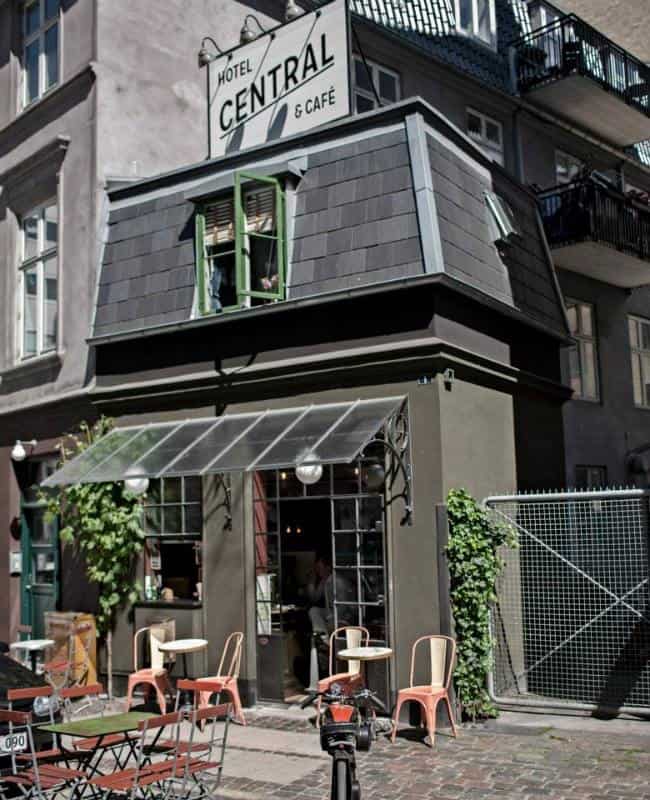 Central Hotel & Café in Copenhagen is another contender for the title of the smallest hotel in the world. It has one room above a café in the Vesterbro neighborhood, and that’s it. The room features a cozy double bed, a private bathroom, a small desk, and a tiny coffee table next to a window.

It’s a charming hotel room thanks to the beautiful furniture, and it’s certainly a unique and romantic experience for couples.

Another cool thing about this hotel is that the café on the first floor serves amazing coffee and food. You can get meals included in the price of your stay, but it’s going to cost you. The room with breakfast and dinner included goes for about 330 Euros a night! 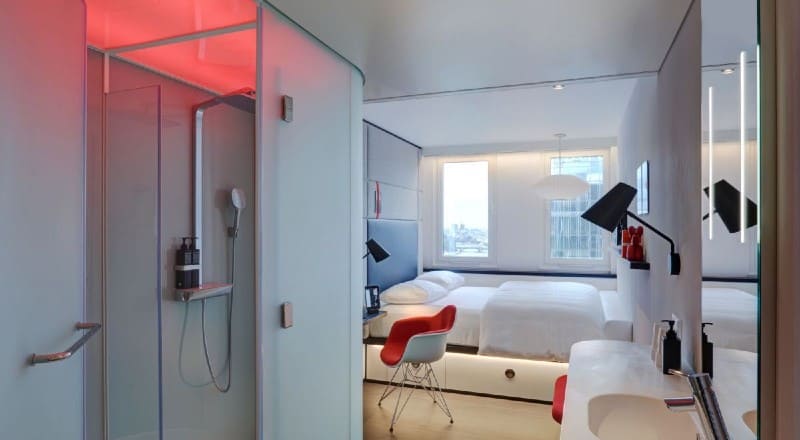 CitizenM hotels are found in 14 different countries all over the world, and they even offer something called the Global Passport – it allows you to book 29 consecutive nights, which you can spend at any one of their hotels. The rooms at CitizenM hotels are tiny, but they include all the necessities – a comfy bed, a bathroom with a shower and toilet, and a small desk.

I singled out the CitizenM hotel in Paris because the location is phenomenal – it’s right at Gare de Lyon, in the heart of the city. And it’s just across the train station, making the location ideal for further exploration of Paris.

A 64-year-old man in Jordan decided to turn an old Volkswagen Beetle into one of the world’s smallest hotels. The car is furnished with handmade embroidered pillows and sheets, and it’s definitely a unique experience. The car is on the side of a road in Al Jaya village, and the rest of the hotel amenities are in different stone buildings.

This tiny hotel is close to Montreal – an archaeological site that features ruins of a 12th century castle. It’s not a very busy or populated area, so even though the hotel is very close to the road, you won’t be disturbed by cars at night.

The Pod Hotel is another interesting take on tiny hotel rooms in awesome locations. The Pod hotel is in multiple cities in the United States, with as many as three different locations in Manhattan. I’ve singled out the one in Times Square here, simply because that’s one of the best locations in Manhattan, and this type of hotel is cheaper than all other accommodation options.

The hotel rooms are very small with either a double bed or bunk beds. The bathroom is separated from the rest of the room with a curtain, so you will need to sacrifice some privacy. Rooms also include small desks and wardrobe drawers below the beds. 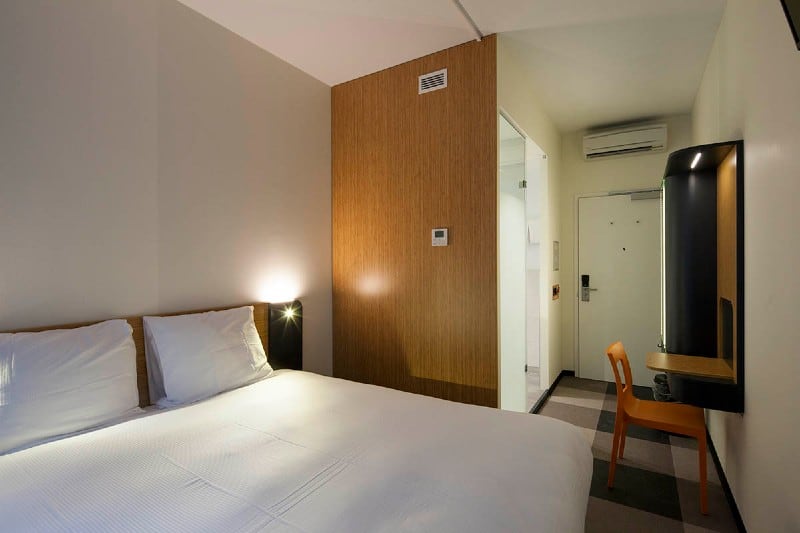 EasyHotel is a chain of hotels in multiple locations all over the world, with several hotels in the most popular cities. The accommodation prices are flexible, meaning that the earlier you book a room the cheaper it will be. The hotel rooms are small, but you will have all the amenities you’d expect from fancier hotels like flat screens, WiFi, and a private bathroom.

The hotels are usually in excellent locations either in the city center or within walking distance of train and metro stations. Plus, all hotel rooms are heated and air conditioned, and you can actually choose between double, twin, or triple beds. 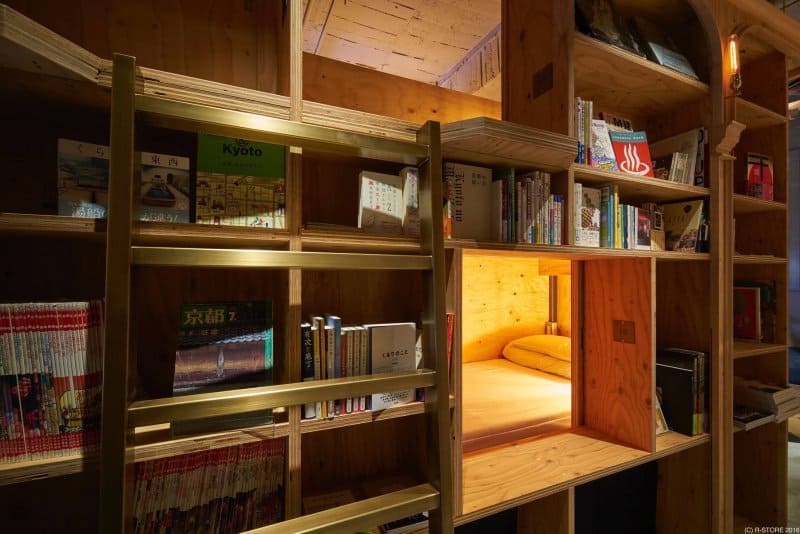 Book and Bed Tokyo is the perfect hotel for bookworms. This is literally a hotel in a bookstore, and “rooms” are pretty much inside huge bookshelves. You also have the option of renting something more spacious, but even the superior room doesn’t feature more than a bed a couple of necessities.

The basic rooms feature either single or double beds, a curtain to pull over the “entrance” to your room and electrical outlets inside. There are small shelves above the beds and that’s about it! The bathroom is communal no matter which room you book, but at least it’s clean and modern. Plus, you have access to all the books you could possibly read, and that’s the dream! 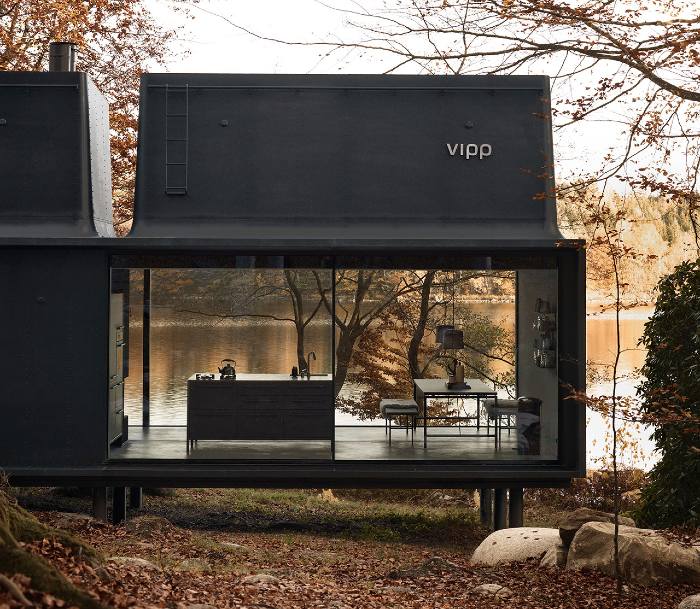 Vipp Shelter on the bank of Lake Immeln in Sweden is a luxe hotel for two. It’s an all-steel container with large windows that offer spectacular views. The hotel is in a peaceful area in nature, perfect for people who enjoy privacy.

The hotel offers only the necessities, but everything inside it is modern and luxurious. If you are into minimalism, I’m pretty sure you will want to take this steel container home with you!

The only downside is that the luxurious furnishing comes with a very high nightly rate of 1000 Euros per night – that could get you four nights in the actual smallest hotel in the world (in Germany), so think twice before heading to Sweden!