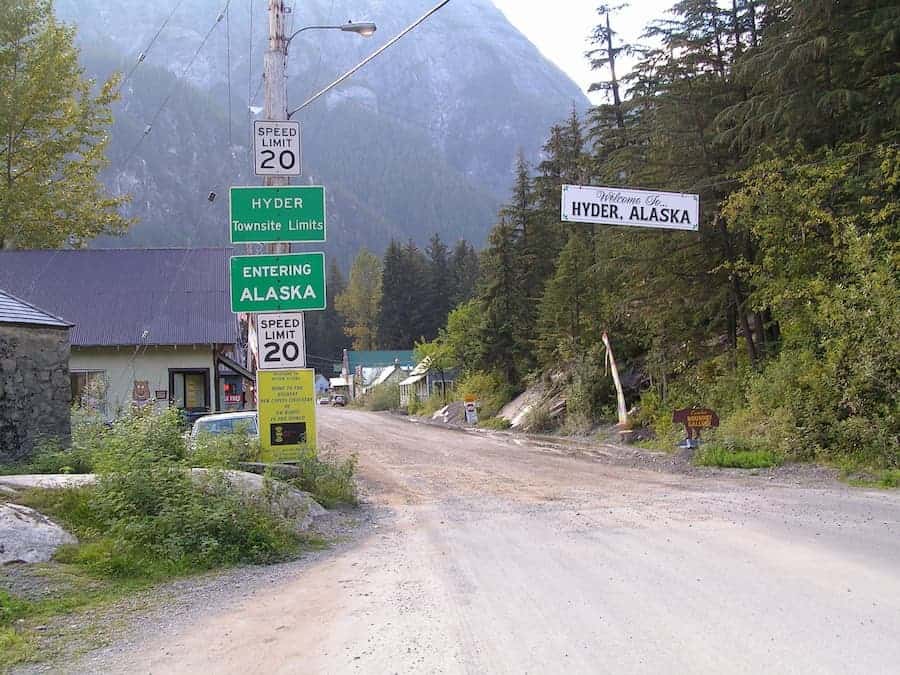 Border towns are always fascinating to world travelers, and Hyder, Alaska, USA, and Stewart, British Columbia in Canada are no exceptions. According to who you ask, Hyder is in a remote part of the state isolated by Canada. But someone else may tell you Hyder is a bit of Canada isolated geographically in Alaska.

Either way, their close proximity of 3.3 miles (5.4 km) blends the diversity of two cultures in one place into a breathtaking setting of oceanfront and alpine scenery, ice fields, glaciers, and stunning waterfalls. Travelers from Canada can visit Alaska legally without a US visa, making a trip to the area a bucket lister’s dream.

The small community of Hyder consists of a scattering of restaurants and bars, motels, a post office, a public library, and a health clinic. A visitor center with an onsite museum greets tourists. Hyder has a history as a colorful wild west mining camp that once used its American territorial status to access Canadian silver mines that could only be reached via Hyder.

The camp was the site of saloons, gambling, ladies of the night, and other assorted sins. Just across the border, it was out of reach of the long arm of the law from American law enforcers and Canadian Mounties.

Hyder is situated at the head of the 130-mile (210 km) Portland Canal, along a fjord forming part of the US/Canadian border. Once called Portland City, the name was changed to Hyder in 1914 in honor of Frederick Hyder, a Canadian mining engineer.

Travelers can get to Hyder by road from Stewart (Hywy 37-A), or by private boat or floatplane. The ferry that connects Hyder to Ketchikan no longer operates. Today, the only public transportation is a floatplane that delivers U.S. mail twice a week. Other than the post office, Canadian currency is preferred. Canadian authorities respond to emergency calls. 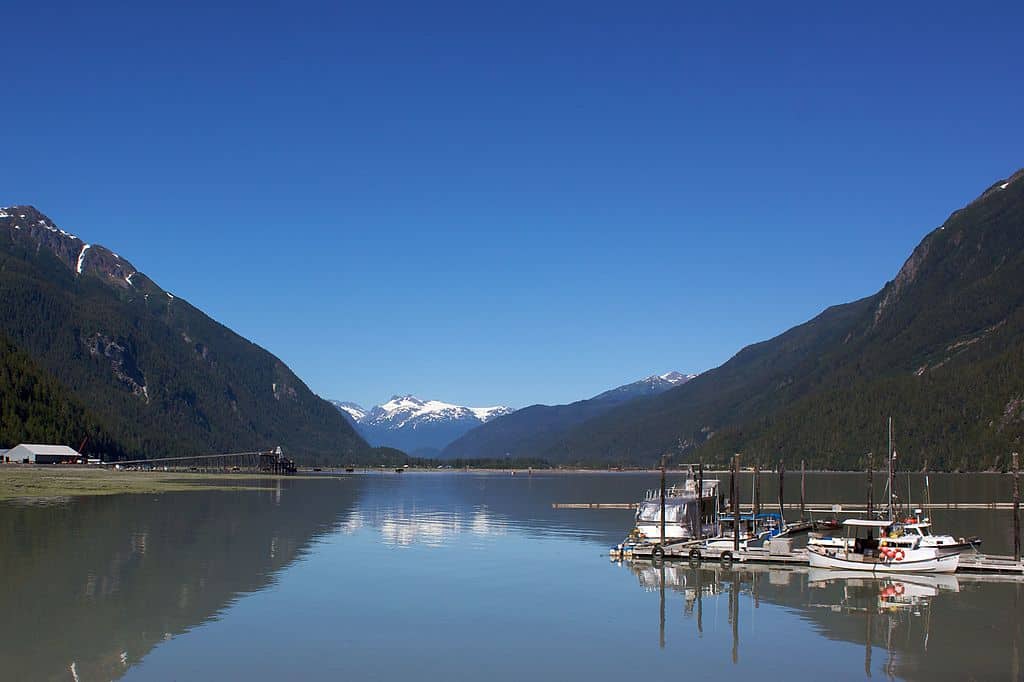 Looking at Stewart from Hyder – Image courtesy of Wikimedia

With its deep harbor, Stewart, BC is known as Canada’s Most Northerly Ice-Free Port. The town sprang into being in 1898 when 68 eager prospectors came to the area at the head of the Portland Canal in a quest for placer gold. The rumor was, the deposits were comparable to those in the Klondike.

The pannable gold never materialized, but the attention increased mining exploration in the area. The settlement was later named Stewart for American mining bothers who prospected here at the turn of the century.

Meanwhile, by 1917, nearby Hyder was booming after the discovery of silver veins in the Upper Salmon River Basin. Together with its sister town practically steps away across the border, Stewart went through a boom and bust cycle with the height of prosperity experienced in the 1960s. Miners with families relocated to work in the mines. It was the hub for Canadian mining until 1956 when mining discontinued except for one copper mine.

With most of the mines closed, Stewart turned successfully to tourism, thanks to its breathtaking mountain vistas, verdant rainforests, and abundant wildlife. In recent years, it’s been the sight of several blockbuster movies including The Thing and Eight Below.

The story of the town’s mining is relegated to the Stewart Historical Museum. Stewart has a small airport for small airplanes, but most visitors come by car via route 37 and 37 A. Coming from distant places, they fly to Prince Rupert, Terrace, or Smithers and rent a vehicle to Stewart. 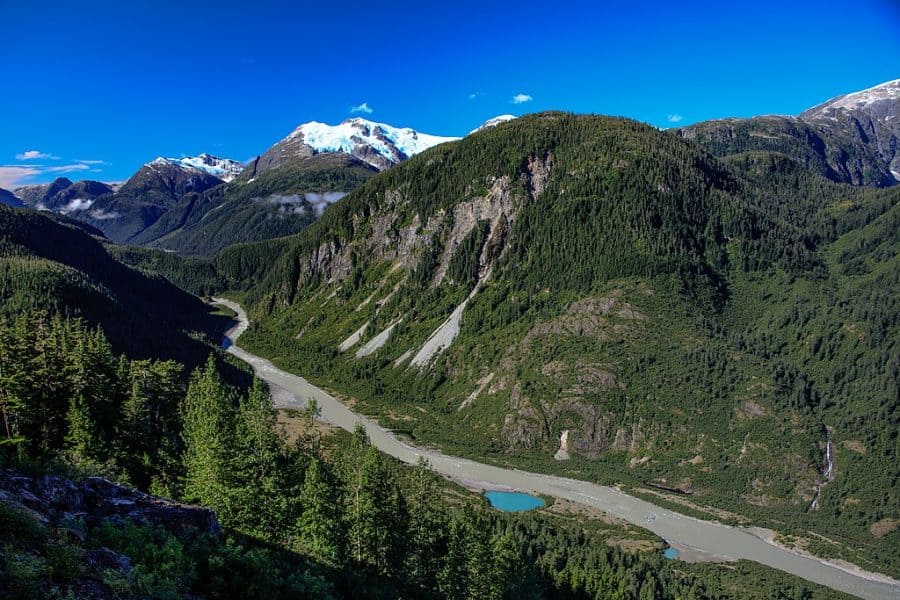 The Hyder-Stewart Border Crossing connects Hyder to Stewart. It’s marked by an old 1896 stone storehouse. The border can be reached from Stewart on Highway 37 A and in Hyder, from the aptly named International Street. It’s one of the only border crossings where travelers can enter the U.S. without reporting for inspection.

The U.S. closed its border station in the 1970s to cut costs. The building now houses Boundary Gallery and Gifts. On the return trip to Stewart, travelers must stop for inspection to cross back into Canada. The Canadian Customs office is open 24 hours a day, seven days a week, and travelers must have a valid ID.

Stay and Play in Hyder-Stewart

Hyder and Stewart offer residents lots of things to do in their corner of the world, and they love to share the natural beauty of the area with visitors. Explore the Hyder-Stewart area on your own or with a local tour guide.

Both Alaskan brown and black grizzly bears are native to the area and the pride of the locals, so much so, many of the bears have been given names. The Fish Creek Viewing Area was established in the Salmon River Valley by a scenic glacial river. Observe and photograph the bears in their natural habitat as they fish for pink salmon and chum from the clear, shallow waters of Fish Creek and Marx Creek.

The bears can be seen from mid-July through early September when they gather to feed on the fish that come to spawn. Forest Service employees are on hand daily from 6:00 a.m. to 10:00 p.m. to provide information and answer questions. Be aware that the bears often walk along the road and meander through the parking lot. Respect their space, listen to the guides, and avoid confronting them.

Fish Creek is located three miles north of Hyder. The parking lot is on the left, past the Fish Creek bridge. It’s managed by the USDA Forest Service. A one-day pass is only $5. (Or get a three-day pass for $10 or a weekly pass for $20).

Go for a drive above the Salmon Glacier, North America’s fifth-largest, for spectacular scenery, photo ops, and picnicking along the way. Looking down, you’ll notice how the glacier constantly changes itself and the surrounding landscape. The road begins at Alaska’s sea level and climbs to the glacier’s birthplace 4,300 feet into the alpine region of British Columbia. Follow the Granduc Road out of Hyder for approximately 25 miles. Keep an eye out for old gold mines along the way.

Don’t miss a golden opportunity to see a rare blue glacier! Bear Glacier is a roadside glacier with the world’s easiest access to this incredible phenomenon. You’ll see the glacier about 30 km (18 miles) before arriving in Stewart. A roadside viewing area allows vehicles to park and take photos.

Learn about Stewart and Hyder’s remarkable history at the Stewart Historical Museum, open from May to September. Visit the exhibits, read all about the communities, and see the props from the Hollywood Movies filmed here including Bear Island, The Thing, Insomnia, The Iceman, and Leaving Normal. The museum is located at 603 Columbia Street in Stewart.

Then head to the Toastworks Museum on Main Street in Stewart. This unique museum celebrates the mundane with a collection of century-old toasters!

The Stewart-Hyder area has lakes and rivers for fishing, boating, kayaking, canoeing, and water skiing. And anglers will be delighted at the variety and abundance of fish for catching.

You can ask one of the friendly locals where the hot spots are or charter an area fishing expedition. Fish for king salmon up to 50 lbs, Alaskan king crab, and Coho salmon in the Portland canal, and Dolly Varden in Fish Creek. Head to the Meziadin River or the Nass River for a variety of salmon and steelhead fish, or to Bib Quinn Lake for rainbow trout.