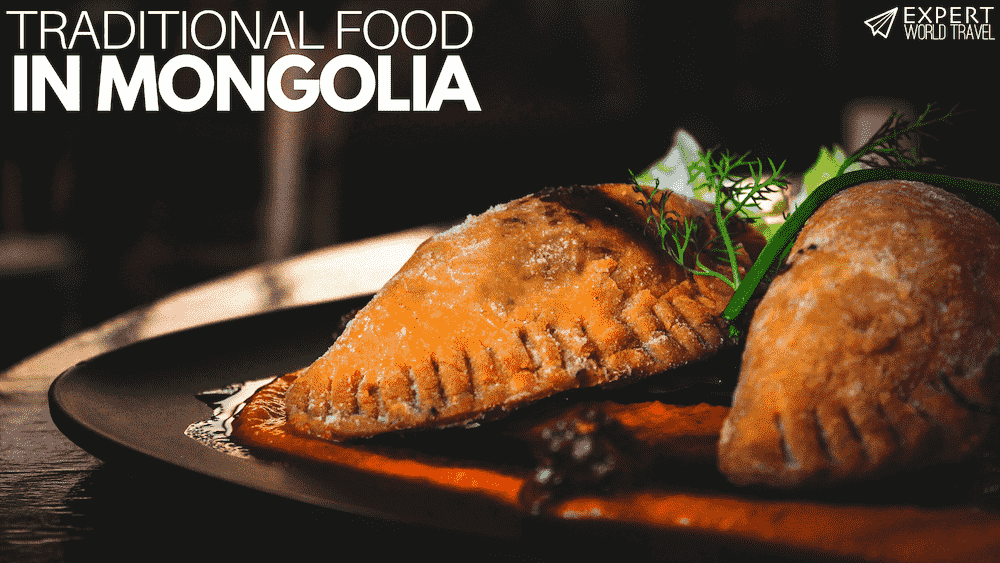 Traditional Food In Mongolia (What Do They Eat?)

Vegetables don’t feature in Mongolian food very much, it’s all about meat and dairy. Mutton, goat, beef, milk, cheese, and cream are in pretty much every dish. It’s food for survival not for taste, although it’s pretty damn yummy if you love a stew. 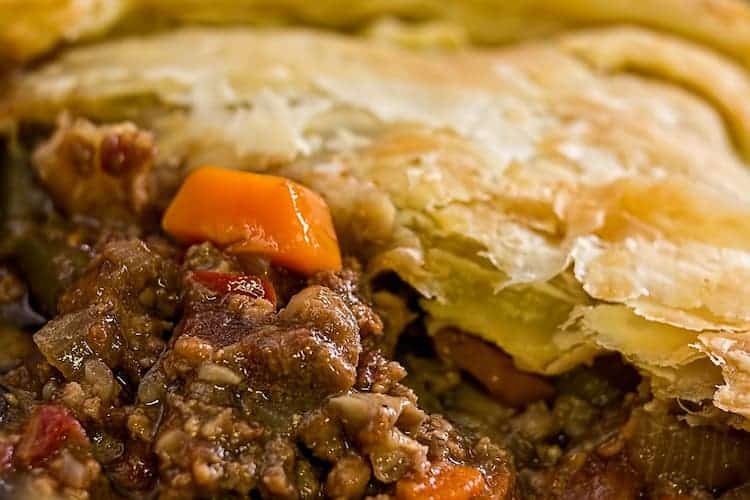 Khuushuur is as close to a cornish pasty as any other meal could be, except that khuushuur is fried instead of being baked. Khuushuur is made by filling pastries with goat or mutton meat and then frying it.

You might find khuushuur with some vegetables like carrots, potatoes, and onions inside it in some places, and these versions taste just like a cornish pasty.

Khuushuur is a very available finger food and you can pick it up at any hole in the wall or eatery in Mongolia. If you’re planning on going on a long hike, then taking a few khuushuurs with you is a great way to keep your energy up.

Traditionally in Mogolia, Khuushuur is served hot and held in the hands in order to warm them and promote blood circulation.

Buuz is a dumpling made in a Tibetan style that is hugely popular in Mongolia and considered the country’s national dish. You will find them everywhere in Mongolia, all you need to do is stop at a roadside restaurant or cafe and these are likely to be on the menu.

The dumplings are made with a beautiful mix of goat or mutton mixed with caraway, garlic, and onions that is then steamed to provide a super-rich delicious flavor. Sometimes they are served alongside or in a mutton broth or soup, but they are just as delicious on their own.

If you’re eating at a good restaurant in Mongolia or a Mongolian restaurant outside of Mongolia you might find the dumplings are filled with beef or duck but this goes against the Mongolian tradition of fattier meats are better.

Hankering for some clotted cream, scones, and jam while in Mongolia? Well, weirdly enough, the Mongolians have got you covered, to a point.

Orom is a traditional breakfast or dessert in Mongolia and it’s made up of a special kind of clotted cream you might not have tried before. The cream is made from boiled goat, yak, or cow’s milk and the taste of the clotted cream depends on the kind of milk used.

Goat’s milk clotted cream is quite light and subtle while yak’s mile clotted cream is super rich and deep in flavor. You have probably tried the cow’s milk version so I don’t need to go into that one.

The clotted cream is then served with freshly baked bread, sugar, and or jam. It’s a delicious breakfast and/or dessert. 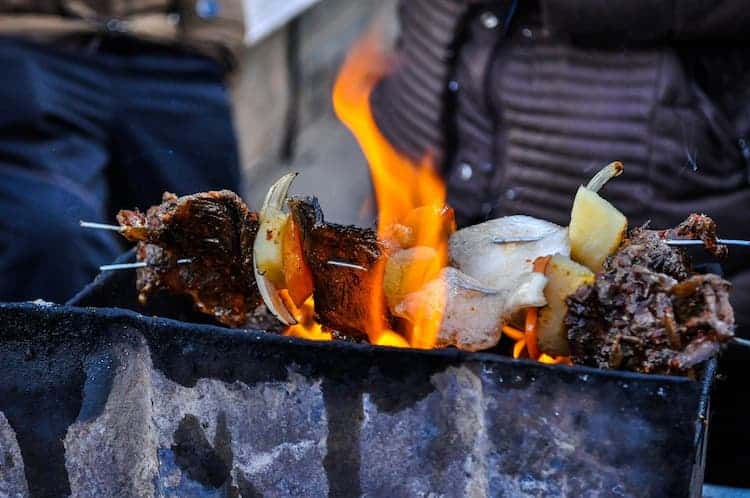 If you’re walking around the capital of Mongolia, Ulaanbaatar, or attending a festival in Mongolia, or even an archery competition then you’re likely to find some mutton kebabs on the menu and you won’t find them anywhere else.

Mutton kebabs are Mongolian street food and they are a great snack to have while wandering around town. They are made with pieces of slated fat, chunks of mutton, and potatoes which are then grilled on an open bbq.

These mutton kebabs are full of flavor, a bit salty, and a tad chewy but they are delicious if you’re a fan of meat.

If you’re in Mongolia and happen to be invited to and be a guest at a special occasion, you might end up being able to try some Boodog, a traditional Mongolian roast. Now boodog isn’t just a chicken thrown in the oven, the Mongolians take the meaning of a roast to a whole other level.

Boodog is made by slaughtering, gutting, and skinning a whole goat. The goat is then stuffed with hot stones, onions, and potatoes and is roasted whole until it’s done to perfection. Boodog is not just made from goat, a whole marmot can also be stuffed and roasted.

Boodog is not a meal if you’re squeamish about meat as the goat or marmot is roasted with legs, tail, neck, and all. While it is rich, hearty, and quite delicious you’re going to need to be quite brave to try it. 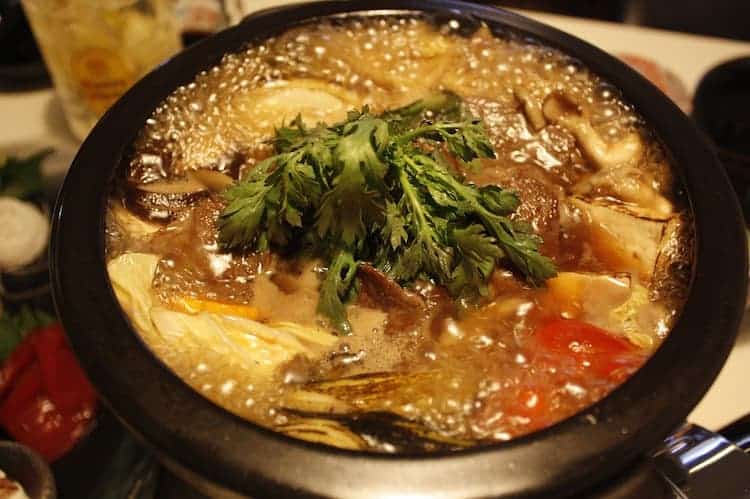 Bantan is a meat broth that is excellent for curing hangovers and it also aids food poisoning. It’s made by throwing meat on the bone and a pile of onions into a pot and letting it simmer for 5-6 hours. This takes all the nutritious bone marrow out of the bones and pulls it into the broth which is why is so good for hangovers and food poisoning.

Once the broth is ready, flour is added to make it thicken up and create a thick, porridge-like consistency. This dish is one example of how nothing is wasted in Mongolia, so while they do eat a lot of meat, every part of the animal is used.

If you end up staying at a homestay in Mongolia, which is highly likely by the way, you are probably going to be served a meat surprise known as five fingers. It’s called five fingers because you eat it with your hands but if you’re a little squeamish about meat, this might not be the meal for you. But, you’re probably going to have to eat it to be respectful to your hosts.

This meat surprise is basically a concoction of every organ of a goat or sheet along with the legs, ribs, and head boiled up in a pot. The surprise is, you never know what piece you’re going to pull out of the pot. If you’re the guest of honor, you will probably be offered the eyeball to suck on as it’s meant to be the most nutritious part of the dish.

If you’re a veggie, Mongolia food is probably not going to be your cup of tea as it’s all about meat and the odd potato. You might have noticed that the most famous dish, Mongolian BBQ isn’t featured. This is mainly because it’s not traditional and actually Taiwanese.