What Is Argentina Known For? (Apart From Patagonia!)

With such a huge land area, Argentina is home to such a diverse array of different landscapes, flora, and fauna. Form the Andes mountains to the west, the Atlantic coast to the east, the rainforest to the north, and the stunning dramatic southern coastline, it really does have everything to offer and more.

Argentina isn’t lacking when it comes to the cultural side of things either. The Argentines really know how to have a good time and are deeply proud of their country which is showcased everywhere you go, and if you have seen an Argentine football crowd, you’ll know what I mean.

Join me as we take a look at what Argentina is known for. 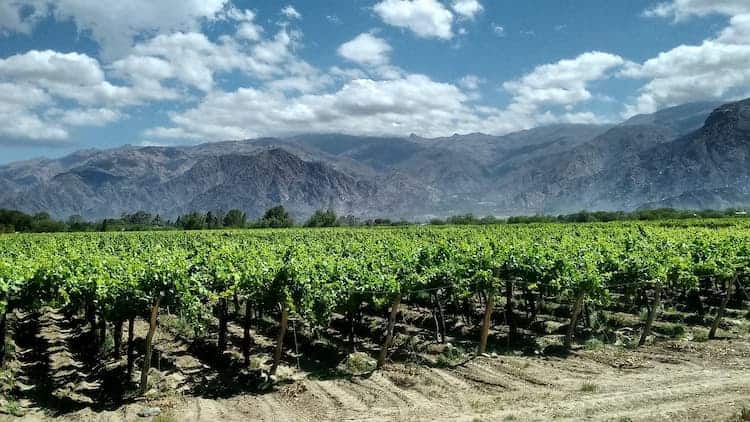 Argentina is the fifth-largest wine producer on the planet and this is thanks to the climate and soil found in the Argentinian region of Mendoza. The dry cool conditions combined with fertile with rocky soil create the perfect environment for growing vines. The lack of rain removes insects and rot from the equation while the rocky soil stresses the vines to create grapes with a higher flavor content.

Despite being the fifth-largest producer of wine in the world, 90% of Argentina’s wine doesn’t leave the country. The Argentines love a glass of wine, it’s by far the nation’s favorite drink, and there is never a bad time to have a glass. Whether it’s watching a movie on the sofa or catching up with friends, wine is on the menu.

If Argentina is known for anything then it’s football and the country has developed some of the best football players that have ever lived – yes I’m talking about Lionel Messi and Diego Maradonna. Both of these amazing players were born in Argentina and are treated like legends everywhere you go in the country.

Argentina isn’t just known for producing great players, the Argentines are obsessed with football to the point that Buenos Aires has more football stadiums than any other city in the world. Their passion for soccer is relentless, so much so that you’ll see something football-related everywhere you turn, from graffiti to kids playing soccer on a street corner screaming “Messi” when they score.

Football is so deeply rooted in their culture that family get-togethers happen at football stadiums and friends socialize by playing football together. 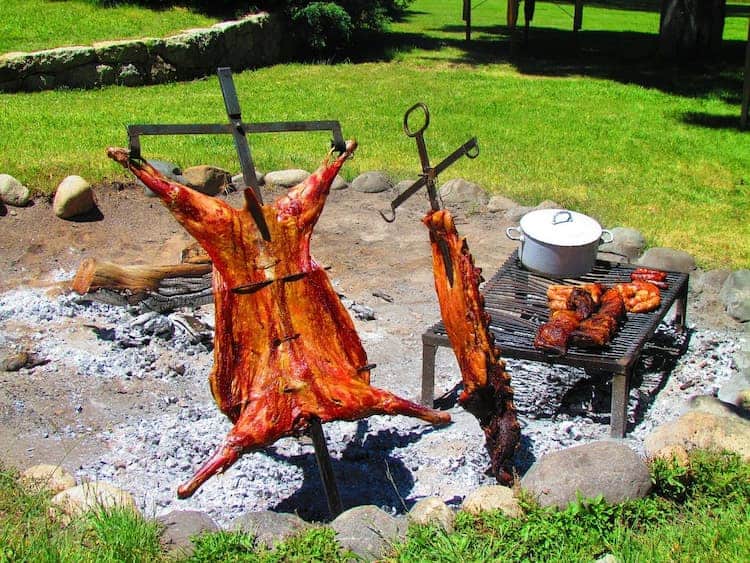 Another thing that Argentina is known for is its amazing steak. Here is a fun fact for you – Argentina eats more meat than any other country in the world and is home to more cows than people, and 80% of their cows are consumed in the country. I’m not sure what that says about their carbon emissions, but boy do they love a steak.

Argentina’s beef is world-famous for having an incredible taste and there are numerous reasons why. Their cows are grass-fed, free to roam around huge estancias, and 100% antibiotic-free. You couldn’t find a more natural or organic cow if you tried and the quality of the beef is showcased in how delicious it tastes.

It’s not just how the cows are raised that makes an Argentinia steak so delicious though, it’s also about how the Argentines prepare a steak. They only use a stone or ceramic grill with charcoal or wood as the heat source. There are no frying pans or metal propane grills involved, which ensure the meat takes on an authentic flavor.

Argentina’s obsession with steak also has cultural roots as it’s tradition for families to get together on a Sunday for a BBQ or an asadito where, of course, beef and wine are served.

When you ask yourself – what is Argentina known for? It would be no surprise if Tango was one of the first things that came to mind.

Tango originated from Buenos Aires in the late 1800s and since has become a hugely popular form of dance all across the world. It came about in the 1880s during a time when hundreds of thousands of Italian immigrants had settled in Buenos Aires and fused dancing styles from Europe, Africa, and Native South America into one dance, the tango.

Tango started out as an underground dance that was thoroughly disapproved of. Its seductive style forced it into the basements and brothels of Buenos Aires to be performed and it was thought of as a dance for the underprivileged and poor people of the city.

Tango was actually banned in Argentina between 1955-1983 but then it saw a huge resurgence in the 1980s and became world-famous. Today in Buenos Aires, you can find tango clubs all around the city and everywhere else in Argentina too. It’s a dramatic dance that tells a story to match the tempo of the music that accompanies with and is stunning to watch. 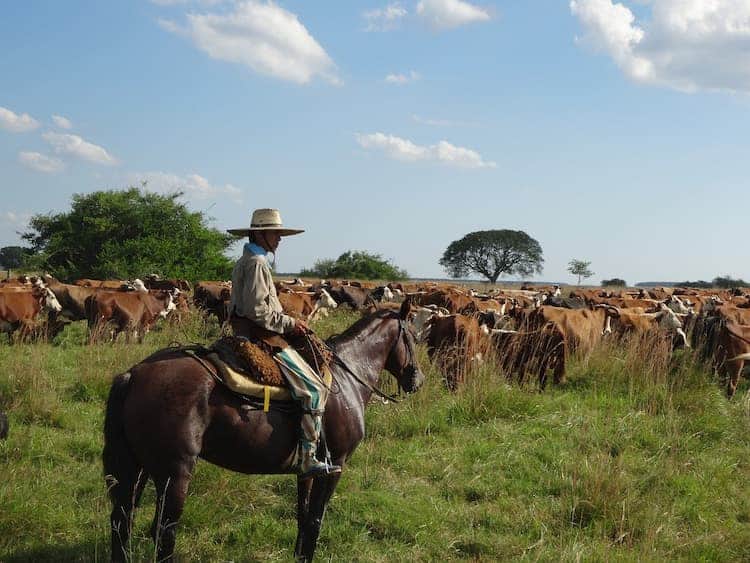 Argentia is also known for its Gauchos which are, in essence, the Argentinia version of cowboys. With so many cows to look after and huge landscapes to manage them in, it makes sense that you’ll find a lot of gauchos in Argentina but there is more to it than that.

Gauchos are a national symbol in Argentina and this is thanks to the role they played in the War of Independence. Gauchos know their lands better than anyone and they have no shortage of bravery when it comes to protecting it either.

During the war, the gauchos played a vital role in teaching soldiers about the land, gathering intel on the enemy’s forces, and setting up ambushes to take them out. It was their deep knowledge that helped win the war against the Spanish.

Today, you can still find Gauchos in Argentina around the central plains in the Pampas tending to the thousands of acres of land their cattle are free to roam. When visiting Argentina you can dive into the gaucho culture and learn how to manage cattle at ranches, ride horses, and lots more.

You have most likely heard of the film and the hit Broadway musical Evita which tells the story of Eva Perón, one of the most influencing Argentinian women in politics to date.

Eva Perón was never actually in office, she was the wife of the Argentine President Juan Perón and thus the First Lady of Argentina from 1946 until she died in 1952. Over the years, Eva contributed significantly to repairing the social justice system of Argentina and made huge leaps in improving womens rights and labor rights in the country.

In 1951, Eva was nominated for the position of Vice President but was then forced to withdraw from the race by the army who then staged a coup and took over the country later on.

Eva Peron is still regarded as of the biggest political influencers of Latin America to date and she paved the way for women in politics. Following her time, Argentina was the first country in the world to have a female president, Isabel Peron, and since has continued to support women in politics. 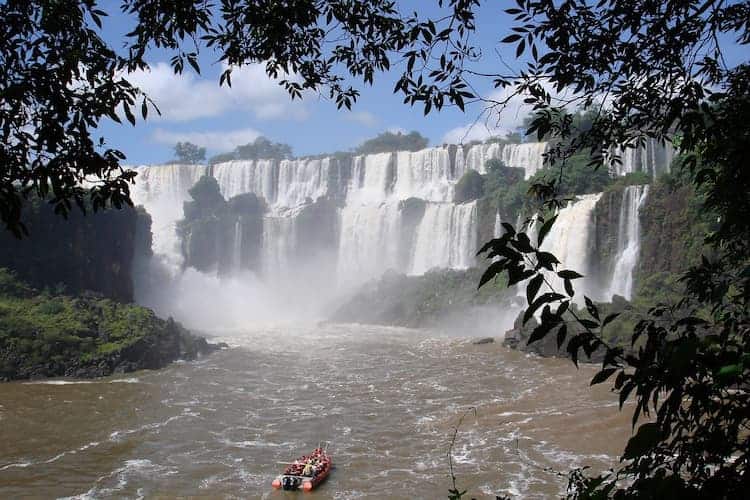 Iguazu Falls are one of the most stunning waterfalls on the planes. This amazing feat of nature is regarded as one of the Seven Natural Wonders of the World and is, of course, a UNESCO World Heritage Site.

You’ll find Iguazu Falls right in the northern tip of Argentina on the border with both Brazil and Paraguay. The falls are made up of 275 different waterfalls some of which are up to 80 meters high. They are seriously impressive and are home to a huge range of wildlife too.

You’ll find 80 species of mammals, 450 or more species of birds, and a lot of plants that you can only find in such watery environments, some of which are endangered.

In 1973 Argentina established the Iguazu National Park in order to protect this wonder of the world and when you visit today you’ll find some amazing things to do including hiking around the nature trails, taking a boat ride to see the falls up close, and you can even zip line through the forest.

The best part of the falls is regarded as Devil’s Throat. This is where 14 waterfalls cascade down, one after the other, over 400 meters into a stunning forest-framed gorge. People say you have seen a waterfall until you have seen Iguazu, and they are probably right.

Another thing Argentina is known for is invading the Falkland Islands in 1982 in an attempt to claim this territory back from the British, and this is still a point of contention today.

The Falkland Islands have been a British territory since 1883 and was named a British colony in 1892. The islands are home to 3,000 inhabitants, most of which are British, and take up a land area of 4,700 square miles.

The Falkland Islands are very baron, windswept, and are more of a sanctuary of sea birds than anything else. There have been 230 different species of birds recorded on the Falkland Islands, 70 of which are breeding species, so it’s a very important ecological site that needs to remain protected.

Patagonia is regarded as one of the most beautiful mountainous areas in the world, to the point that there are countless documentaries and even an outdoor clothing brand named after it.

Patagonia is a part of the Andes Mountains and it sits in both Chile and Argentina although 90% of it is in Argentina. It’s a huge expanse of wilderness that encompasses a million square km and is home to over 10 national parks. The region is so diverse as it extends all the way from the Pacific ocean on the Chilean side to across the Andes and into the Atlantic on the Argentinian side.

Spending time in Patagonia is a once-in-a-lifetime experience and it’s known for skiing, camping, fly fishing, rock climbing, mountaineering, camping, hiking, and lots more activities too. It’s not just the activities available that make Patagonia so inviting, it’s the landscapes, geographical features, and the wildlife too. You can go whale watching, see penguins, walk past or on glaciers, and lots more.

Patagonia is also a rich archeological site and many dinosaur fossils have been discovered there some that are up to 50 million years old.

Even though 90% of Patagonia is in Argentina, unfortunately for Argentina, the Argentinian side is covered in grasslands and deserts with is a tad boring. While the Chilean side is home to temperate rainforest and stunning glacial fjords. If you want to visit Patagonia, you’re going to want to go to the Chilean side.

If you have ever spent any time in Buenos Aires you would have noticed the countless number of book stores, there is almost one around every corner. There are actually more book stores per person in Buenos Aires than in any other city on the planet with 754 in total.

It shouldn’t surprise you then to learn that Argentina has one of the highest lietracy rates in South America, hitting 99.13%.

Since 1975, Buenos Aires has hosted the International book fair every year and over a million people attend each one. Some of the most famous book stores in Buenos Aires include El Ateneo Grand Splendid, Libros del Pasaje, and Walrus Books that have amazing collections of both Spanish and English literature.

What Is Argentina Known For?

As you can see, Argentina is known for a diverse range of things from stunning natural environments to political heroes all the way to a ridiculous number of book stores. It’s an amazing country to visit and should be high on your list for your next adventure.