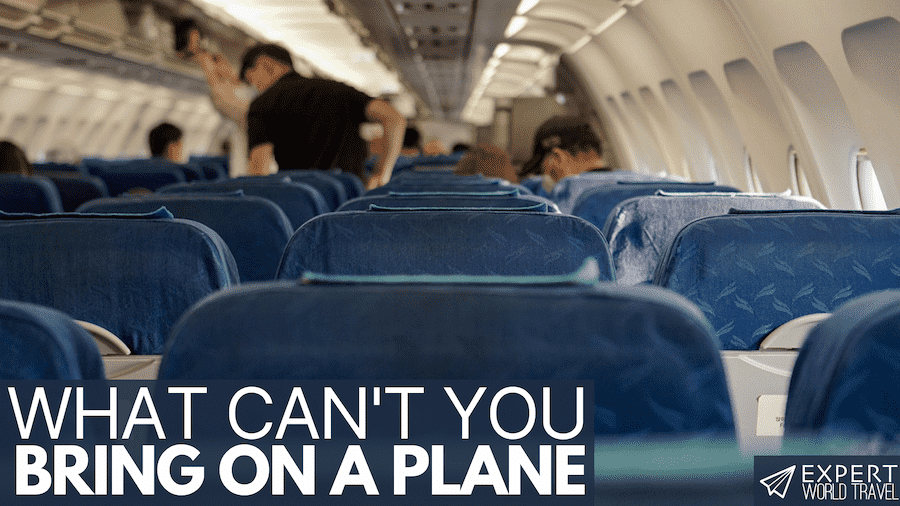 What Can’t You Bring On A Plane

There is always that moment when you’re going through security at the airport with your carry-on luggage. You have a minor panic thinking “god, did I check nothing is in there that shouldn’t be” or ” have I packed the wrong things?”. There is nothing more annoying than having your bag pulled by security for a deeper check and the best to way to avoid all this is by knowing what can’t you bring on a plane.

In this article, we’re going to focus on what you can’t bring on a plane in your hand luggage, as check-in luggage is a whole different story as I’m sure you know. Once you know exactly what isn’t allowed on a plane in your hand luggage by the TSA (Transportation Security Administration), you’ll be able to pack with confidence and know exactly what needs to go into your check-in luggage. Here is what can’t you bring on a plane. 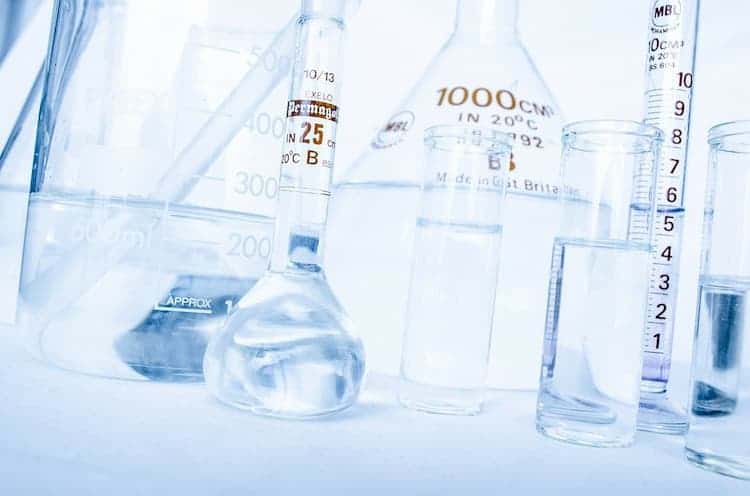 This is one you probably already know and it was introduced by the TSA shortly after 9/11. This is because liquids can be used as explosives and there simply isn’t time at security to check every single bottle of liquid to see if it’s dangerous or not so they instead reduce the amount of liquids that can be brought on board a plane.

So, when you wonder why your 200ml bottle of sun cream is being confiscated, you now know. But, what does the TSA consider a liquid?

“If you can squeeze it, smear it, pump it, spread it, spray it, or spill it then it’s considered a liquid” – According to the TSA. This means toothpaste is also a liquid in their eyes – everyone gets caught out on that!

On top of limiting the size bottles of liquid you can carry, you’re also only allowed to carry a quart-size clear bag of 100ml liquid bottles.

You can only bring one quart-sized bag full of liquids and gels this is because one could bring a load of explosive liquid in 100ml bottles and then mix it on the plane.

There are some exceptions to the rule which include breast milk, liquids for babies and kids, plus any medically necessary liquids.

The TSA powders rule exists for the same reason as the liquids rule. Powders can also be harmful or explosive. You can bring powders in your carry on but any bag of powders of 12oz must be removed and scanned separately just like your laptop is.

You can, however, take a Nutella sandwich with you onto the plane as it’s spread over bread and not in a container. The same goes for things like melted chocolate within a sweet. 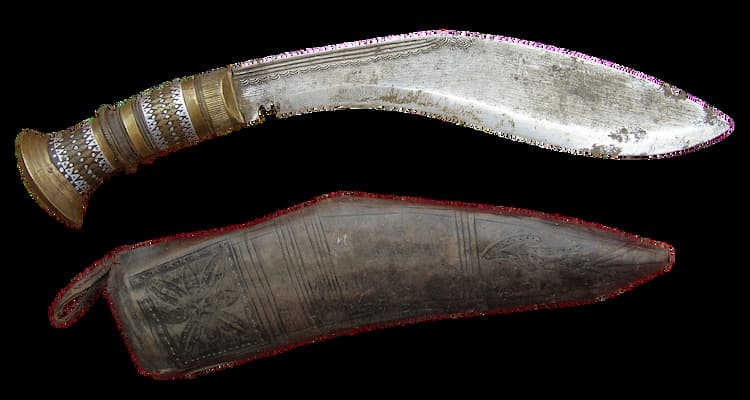 Outside of explosives, the TSA’s other main concern is weapons as they can be used to hijack a plane. This is quite an obvious one but you can not bring any knife, sword, firearms, crossbow, or anything that could be considered a weapon onto a plane in your hand luggage. Even things like tactical torches or pens are not allowed as their purpose is to be tactical and therefore a weapon.

There is one knife you can bring onto a plane in your hand luggage and this is a rounded non-serrated butter knife. I’m not sure why anyone would need to bring one of these onto a plane, but they are allowed.

Toy or replicas of weapons like a squirt gun can also not be put in your hand luggage as they will raise concern and slow down the security process. Things like mace or pepper spray are also not allowed on planes in your carry-on.

Basically, if it can be used as a weapon in any way then it can’t come on the plane in your hand luggage.

Can sharp objects or batts be used as a weapon? Yes, they most certainly can. The TSA does not allow anything that has a blade on the plane or anything that could be used to knock someone out.

This means things like corkscrews, open razors, even blenders won’t be allowed in your carry-on luggage. If it has any kind of blade on it, you will have it confiscated at security.

The same comes to bludgeons and batts. If you’re trying to bring a baseball bat, tennis racket, or a hockey stick on a plane, then think again. They can be used as a weapon to knock someone out with and therefore will also be taken from you at the security check.

You can bring your disposable razor blades with you onboard though as these are not considered to be lethal enough to be a weapon. So you can leave them with your toiletries.

What’s the deal with scissors?

Now, you are allowed to bring scissors onto a plane inside your hand luggage but not just any scissors. The scissors’ blades must be less than 4-inches long when measured from the pivot. So, short scissors are allowed like nail scissors. But, it might not be so nice for the person next to you if you start trimming your toenails mid-flight.

Be careful though, especially if you like your scissors, as the TSA will most likely want to see them when they go through the scanner and if there is any chance they could be used as a weapon, then you will lose your scissors forever and have to buy some more. It’s probably safer just to leave them in your checked luggage.

Good quality tools are very expensive things and the last thing anyone needs is to have their tools taken out of their checked baggage – believe me, it happens. So, can you bring your super-duper expensive tools on the plane in your carry-on so you know they are safe?

Tools shorter than 7 inches long are allowed in your carry-on luggage as they are considered short enough not to be a weapon you can knock someone out with. But, this does mean some tools are altogether not allowed onto a plane in your carry-on.

For example, no hammers are ever allowed in your carry-on regardless of their size. All power tools are also not allowed in your hand luggage but the batteries are so you can take them out before putting the power tool in your checked luggage. 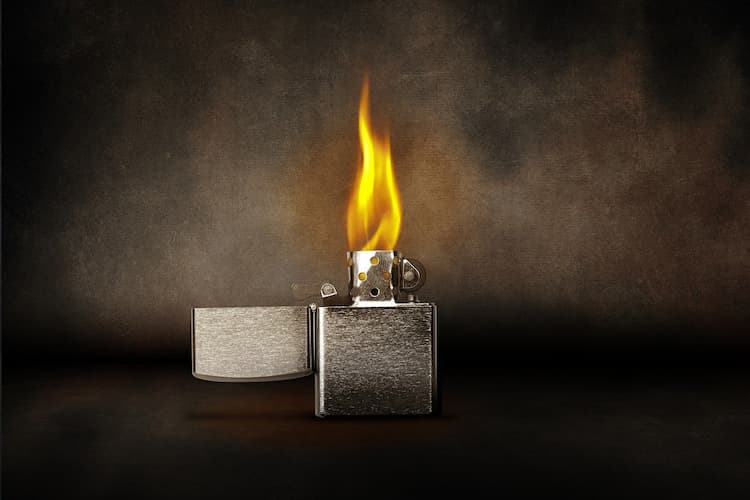 You are allowed to bring safety matches and disposable lighters onto a plane. If you have a disposable lighter, remember it has liquid inside it and will need to go into your liquids bag when you go through security.

Lighters that burn with a blue flame, like blow torch lighters, or chef blow torches are not allowed to come on a plane in your carry-on. The same goes for the super cool and good-looking new arc lighters that Tessla has been coming out with.

Lithium batteries are quite a serious fire risk and airlines would actually prefer you to pack them inside your hand luggage because if they did catch fire mid-flight, the airline staff would know about it and be able to put it out. This is far more preferable than having a fire in the cargo hold that no one knows about until it’s too late.

So, yes you can bring lithium batteries on a plane in your hand luggage which is why things like laptops and power banks are permitted onboard.

But, any lithium battery over 100 watt-hours might not be allowed on the plane at all, even in your checked baggage. If you have a battery of that size that you want to take onto a plane, you had better call the airline you’re flying with to see if they will allow it on board or not.

So, what about flammable items? You’d think they would be a big no but not all of them are banned in your carry-on. If you have a flammable product that can be sprayed on your skin, like a can of aerosol deodorant, then you are completely fine to bring it on board so long as it’s under 100ml as per the liquid rules.

If it’s flammable and doesn’t go on your skin, like lighter fluid for example, then you can’t bring it onto a plane in your hand luggage.

Alcohol above 140 proof or 70% ABV is also not allowed on board a plane in your hand luggage for this reason. As it can easily catch fire and it’s not for your skin.

What about things that explode?

That’s a dumb question right?! Why did I even ask myself that? Well, just to be clear, anything that goes bang, like fireworks isn’t allowed on to a plane..none of us need to hear a banger go off mid-flight, it would create terrifying chaos. 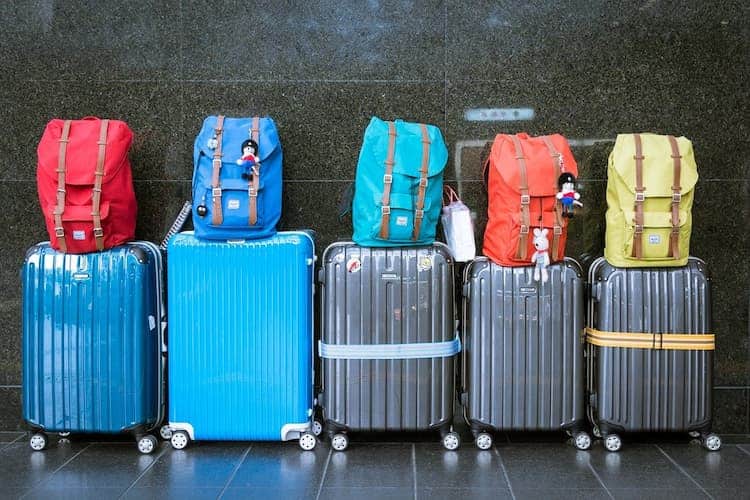 Now you know all the things that shouldn’t be in your hand luggage, so I had better not get stuck behind you in the security line at the airport :).. safe travels!