What Is Connecticut Known For?

Sitting on the east coast of the United States in New England, just next to New York, lies Connecticut, one of the smallest states in the country, the third smallest to be exact.

Connecticut also shares its borders with Massachusetts and Rhode Island, and despite being a small state is home to 3.6 million people making it the 4th most densely populated state in the US.

Connecticut is known as the Constitution State and this name comes from its history since it was part of the 13 original colonies that had a big impact on how the United States federal government was developed.

Despite being a lot smaller than other states, Connecticut is known for quite a lot from Mark Twain to the famous Yale University, and lots more. Join me as we take a deeper look into and answer the question: what is Connecticut known for? But in a bit more detail. 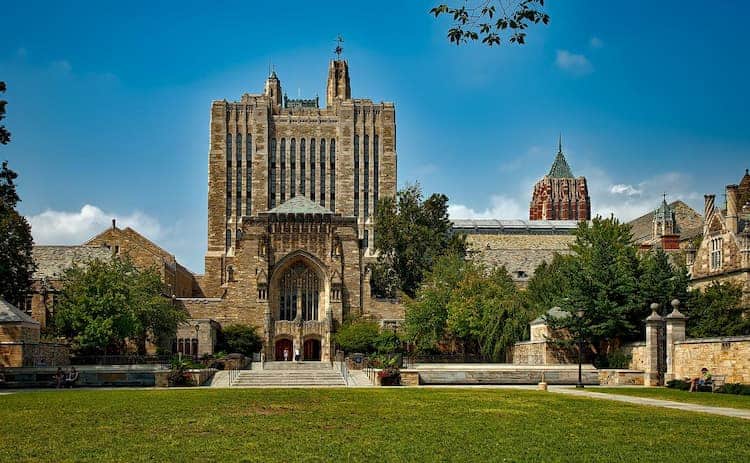 Yale University is probably what Connecticut is known for best and it holds a large part of Connecticut history.

Yale College sits in New Haven and is the third oldest university in the US being founded in 1701 and is one of the best universities on the planet with only a 6% acceptance rate and a 94% graduation rate.

The campus at Yale is about as architecturally stunning and historical as a campus could be and features Gothic-style stone buildings and Gothic Revival architecture. It is quite a campus to walk around and is very much soaked in history.

Yale isn’t just famous for its campus though, it is also one of the best colleges in the world for studying music and drama which pulls in thousands of students each year. It also has a world-renowned literary center being home to two of the oldest literary societies in the world and it also has its “Bun” section of the college for undergrads. 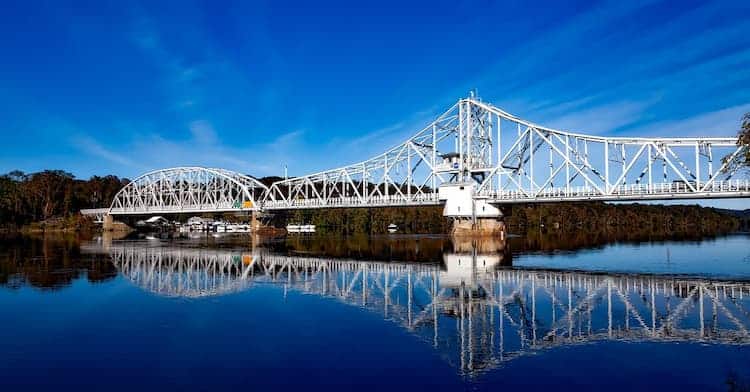 The river plays a large part in Connecticut’s geography running through New Hampshire and Massachusetts, separating Connecticut down the middle from Vermont in the north, and New York on the west, before it flows out into Long Island Sound.

This long tidal river was immensely important in Connecticut’s development and is key for those who live around it. The river actually flows through the capital of Connecticut, Hartford connecting it to the sea and making development a lot easier. 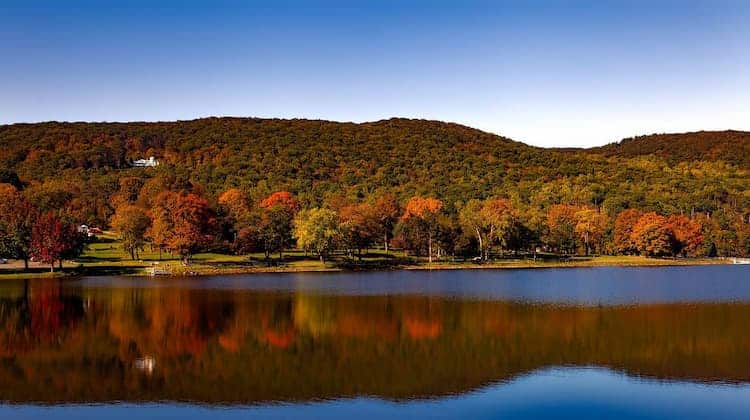 Connecticut along with the rest of New England is well known around the United States for its beautiful fall foliage where the fall season turns all the leaves on the trees into amazing reds, yellows and oranges. It is mind-blowingly beautiful to see.

The foliage tends to last a lot longer in Connecticut when compared to other states in New England so you have a lot more time to witness and enjoy the stunning fall colors. Everything kicks off around September and then runs on through to early November but for the best of the colors, you should visit in October.

This is dependent on what part of the state you are in though as the color changes will start earlier and finish earlier in northern Connecticut when compared to the south.

If you time it right, you are guaranteed to see some jaw-dropping colors that will make you think you are in a Disney movie and you should focus on spending time in the woodland areas like Litchfield. 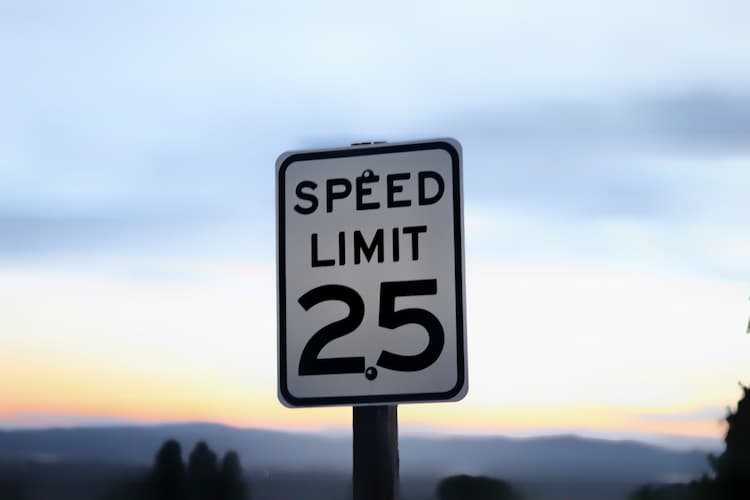 One thing that Connecticut gave the United States was the first-speed limit laws which occurred way back in 1901. The first ever car speed limit in the history of America was a very slow 12 miles per hour.

Can you imagine driving through the Constitution State, past New Haven and into Rhode Island at 12 mph? It would take you months.

It wasn’t long until other states copied Connecticut and added speed limit laws to their roads. It was a great exercise in safety that saved many lives, but thank the lord the speed limit increased as the infrastructure got better. 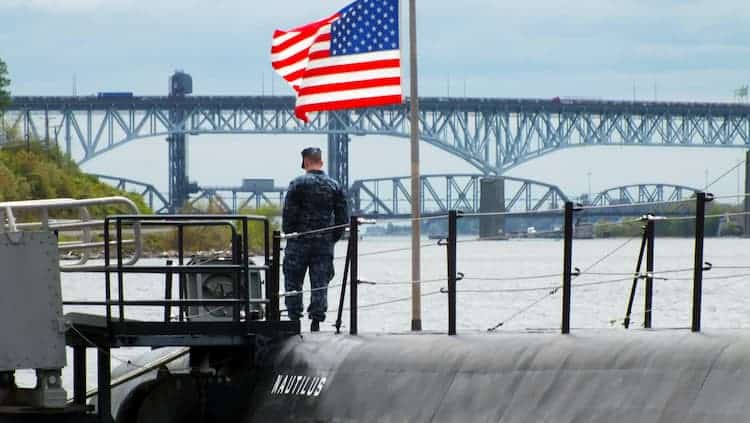 Connecticut is also home to the first-ever nuclear-powered submarine, the USS Nautilus. This amazing feat of engineering was commissioned in September of 1954 and once complete a huge milestone had been achieved.

The USS Nautilus was built in Groton, Connecticut and is a very large submarine that is also super fast and managed to be the first ever vessel to cross the north pole which it successfully did in August of 1958.

After the USS Nautilus’ obvious advantages were seen, the US military decided to build an entire fleet of nuclear-powered submarines to send around the seas.

If you go to the Submarine Force Museum in Groton you will be able to see the USS Nautilus and even board it. A tour around a nuclear sub is quite an experience and not one to be missed while you’re in Connecticut. 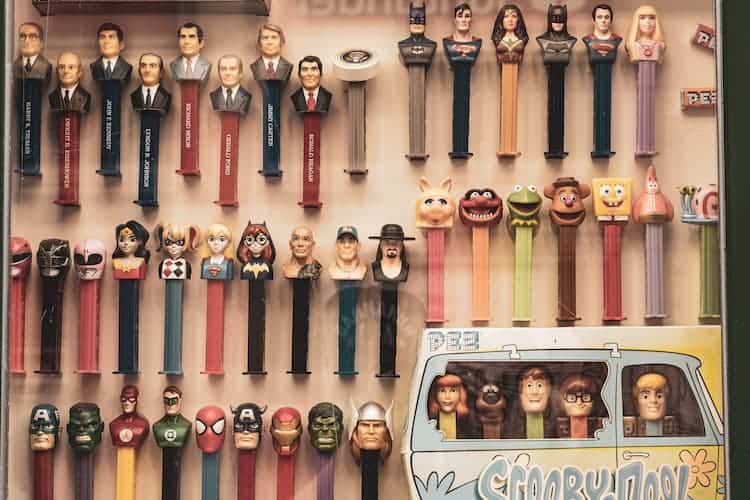 Do you remember PEZ candy? That little sherberty sweet that came out of a cartoon-headed dispenser in the 1990s which pretty much all kids were addicted to and probably still are – I am not so down with the kids these days.

Well, the PEZ candy company which actually originated in Austria now has its headquarters in Orange, Connecticut. The first production plant came to the US in 1974 and now they are pumping out over 20 million PEZ dispensers a year.

Did you know that the first PEZ dispensers were actually made of wood until they were switched to plastic? Lucky so as it is much easier to make fun characters out of plastics.

Now every time you use a PEZ you can think of how the company made its journey from Austria to Connecticut and know exactly where the product in your hand came from. 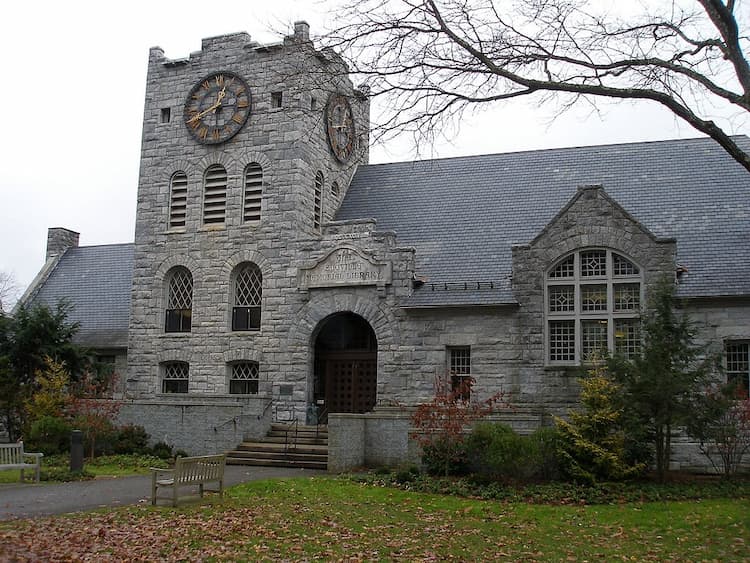 Located in Salisbury, Connecticut lies the Scoville Memorial Library which was the first free public library and was opened way back in 1878.

It was named after Jonathan Scoville, a resident of Salisbury, after he left $12,000 in his will for the building of a library. This donation along with other contributions from the Scoville family managed to finance the construction of the quite elegant building.

It was built from local gray marble and was designed to be both a community center and a library for the town to use, for free. There was/is an auditorium with a piano and stage, a reading room, a reference department, stacks, and even a children’s corner.

The library is still in use today and you can see amazing artifacts like the 15th Century stone carving donated by Salisbury Cathedral in England above the reading room fireplace. You can even hear the tower clock chiming that Miss Grace Scoville donated in the 1800s. 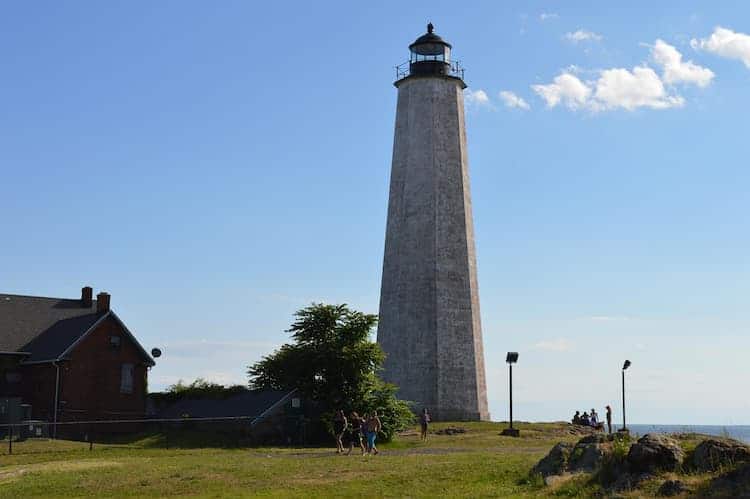 Connecticut is home to a lot of lighthouses despite its rather small coastline and this is simply because accessing the ocean off the state isn’t easy. Many a ship has been wrecked coming in and out of the state waters due to lots of sand bars, hidden rocks, and lots more.

There are a total of 21 lighthouses in Connecticut and you can actually go and see 14 of them as they are open to the public while remaining active. A lot of the lighthouses can be found along the edge of the coast in Long Island Sound.

You will find both old and new lighthouses along the shores of Connecticut to explore and they are a wonderful reminder of both the state’s and country’s maritime history.

The first ever telephone book was invented in the state of Connecticut and is yet another thing that Connecticut has given the world. The phone book was created in 1879 in Stamford by the New Haven District Telephone Company.

Now, being made in 1879, the book wasn’t exactly jammed with numbers and featured only 50 names over 11 pages.

Later on, the Connecticut company bought the New Haven District Telephone Company and over time the book only got longer and longer with more and more names.

Can you imagine how something we take for granted like being able to find a phone number made such a huge difference to the lives of the people in 1879? It must have been quite revolutionary.

The official state tree of Connecticut is the charter oak tree and it was one of the first ever trees to be labeled as a symbol for a given location.

‘It is thought that colonies hid the colony’s official charter inside a charter oak tree, hence the name, as the document gave Connecticut the right to run itself and it was of the utmost importance that no one else got their hands on it.

This shows just how much the charter oak tree is connected to Connecticut’s history as it dates back into legends. 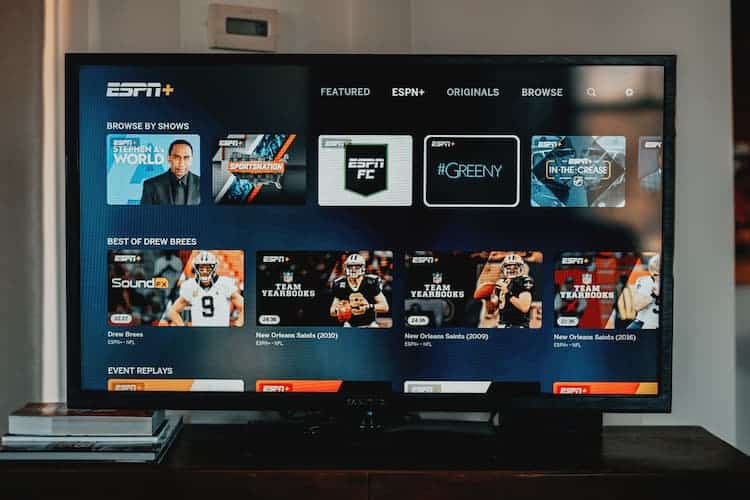 If you are a fan of sports then the chances are pretty high that you love a bit of ESPN – I mean, how could you not? While ESPN is the third biggest sports broadcaster in the world and is known globally, most people in the world don’t know that it is actually from Connecticut.

ESPN has more than 50 different entities that broadcast sports all over the world. It is actually owned by the Walt Disney Company but it was founded in 1979 in Bristol by Bill Rasmussen. It was originally only broadcasted locally but in 1979 in September they sent the program over cable to 1.4 million cable users across the US.

Around 8,000 ESPN employees still work in Bristol, Connecticut and help to keep the 30 or so TV networks going as well as multiple websites and over 90 broadband networks. You can’t actually visit the ESPN network headquarters in Bristol but it is worth driving through the campus and the big field of satellites. 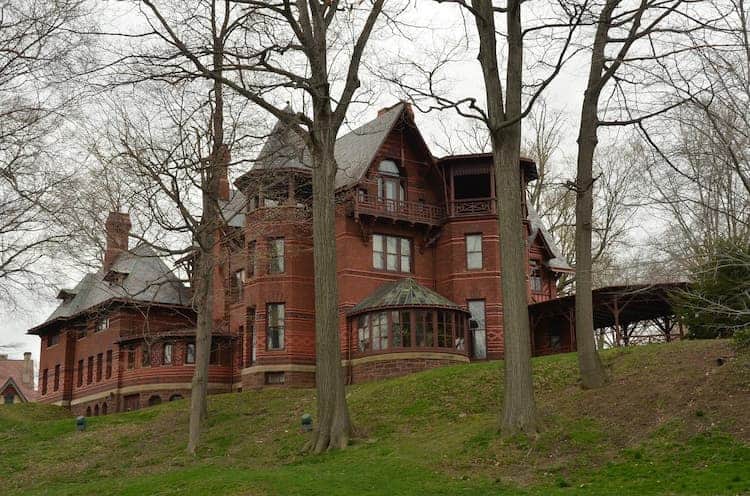 One thing that Connecticut is world famous for is being the home of the legendary author Mark Twain who wrote some amazing literary classics such as The Adventures of Tom Sawyer and The Adventures of Huckleberry Finn.

The museum is home to priceless historical artifacts in connection to Mark Twain’s life and work and you will find it in the state capital Hartford. It is open to the public 7 days a week and it is a must-visit when spending any time in Hartford. 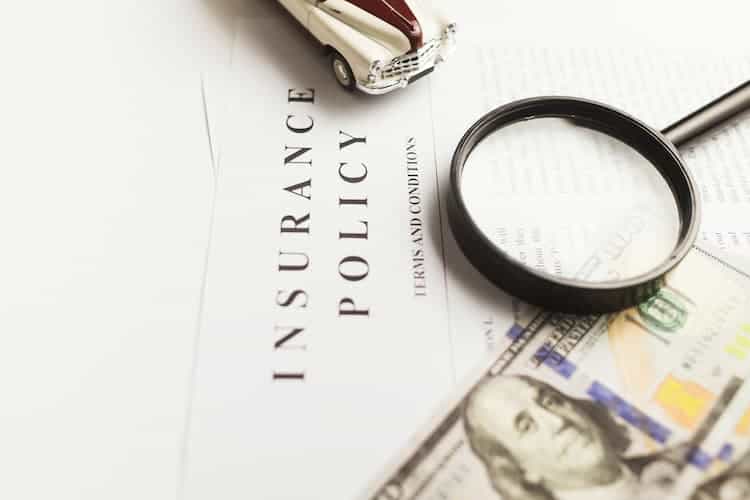 Something Connecticut is famous for which is a little less interesting than Mark Twain is Insurance. Hartford, the capital of the state, is also referred to as the insurance capital of the world and is home to a ton of insurance company headquarters.

There are an astonishing 65,000 or so insurance jobs available in Hartford alone which is no joke considering that is almost ten times more insurance industry jobs than any other city in the United States.

The reason the insurance industry grew so well in Hartford is because the local insurance companies were the first to come up with things like policies for cars, planes, accidents, and more.