What Is Hawaii Known For?

Hawaii is without a doubt a little slice of tropical paradise that we all want to visit and it’s easy to. With just a short direct flight from San Francisco, you can explore the eight main Hawaiian islands as well as the 129 other islands that surround them.

But outside of paradise islands sitting in the Pacific ocean, what is Hawaii famous for? Join me as we take a look at the great things Hawaii is famous for from Hawaiian culture to food and all the things that make the Aloha state so awesome.

Hula dancing is an art form a huge part of Hawaiian culture and something every country in the world associates with Hawaii, and rightly so. Hula Dancing is a form of entertainment usually performed at luaus that were developed by the native Hawaiians who came from Polynesia and colonized ancient Hawaii. While the dancing is similar to other Polynesian dances, the Hula is quite unique.

The Hula dance is quite a complex one as it’s designed to tell a story and the story can be about anything from history to tales of emotion. The story is conveyed usually by women via hand gestures and each gesture makes up the lyrics of the song/story.

A simple movement of the hand in Hula can be a feeling of emotion such as happiness or missing something or it can be something in nature, like an ocean wave or a tree blowing in the wind. 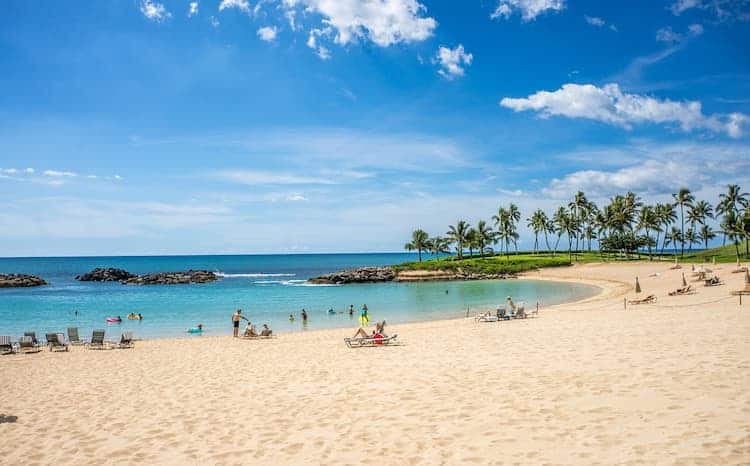 If there is one thing Hawaii is famous for which draws in millions of tourists every year is its beautiful beaches. Hawaii is home to some of the best beaches in the world and while this is a matter of opinion, Hawaii’s beaches are very diverse meaning everyone is likely to see their best beaches ever while visiting.

You have Waikiki Beach, which is one of the most famous beaches in the world. At Waikiki beach, you have everything you could ever want from the pristine blue sea, palm trees, and golden sands to restaurants, bars, and lots more.

As well as beaches with everything on them, you’ll also find beaches in the middle of nowhere that are only accessed via boat or a long hike. With backdrops of volcanoes as well as sands in every color, each Hawaiian beach has its own characteristics such as Diamond Head on Oahu.

You’ll find red sand beaches, black sand, white sand, golden sand, and you can even find a green sand beach in Hawaii which is very rare in the world. 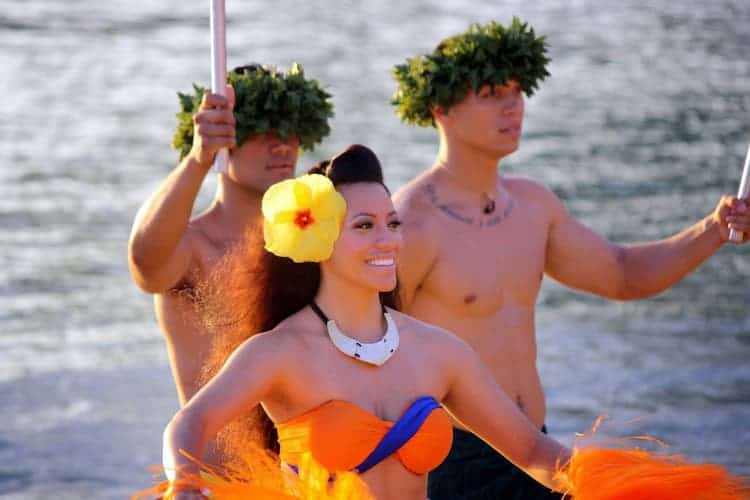 Another of the things Hawaii is known for is Hawaiian Culture and it’s incredibly diverse as it takes its influences from all the different people who have inhabited the amazing island.

The culture, of course, has its roots in Polynesia which was once suppressed but today is celebrated on the islands by the million or so locals from around the world who now call the islands of Hawaii home.

Everything from surfing to deep tradition such as Luaus and dances showcasing Polynesian culture is everywhere on the islands. 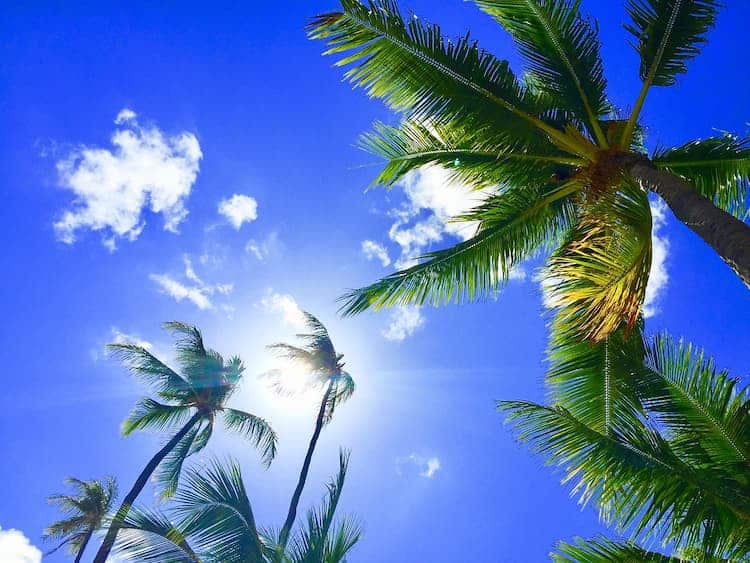 Another of the things Hawaii is famous for is its fantastic weather and being the USA’s southernmost state,  it’s great all year round. It’s pretty much 24 to 31 degrees Celsius all year round, something Hawaii visitors love. And despite Hawaii’s location, it’s not too humid either as the trade winds blow through the islands and keep the air fresh.

But, the weather in Hawaii isn’t all sunshine and rainbows as its position in the middle of the ocean means it does see some pretty serious tropical storms. Also, being a volcanic island its highest peaks Mauna Loa and Mauna Kea can even have snow at the top.

In Hawaii, you can literally be standing on snow and a few hours later walking down a warm white sand beach. 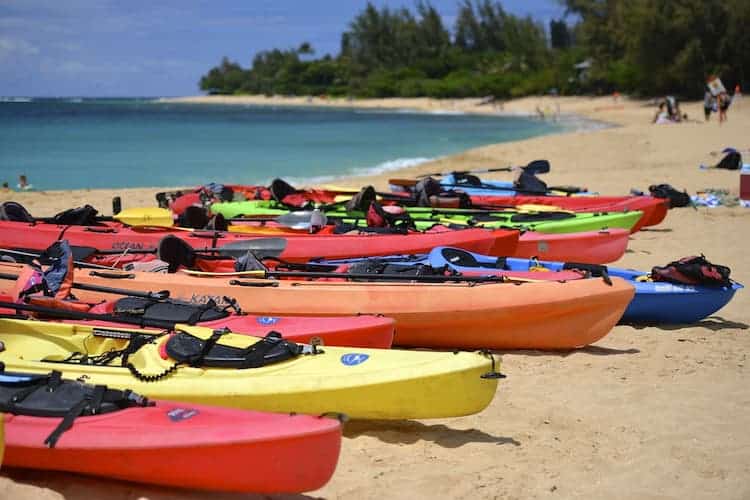 One thing Hawaii is famous for around the world is its water sports. We all know how great Hawaii is for surfing since its north shore is pretty much the surf capital of the world but there is a lot more to it than that.

No matter what island you’re on in Hawaii, where it’s the big island, Oahu, Maui, Honolulu, or Kauai you’ll find every island is surrounded by an amazing amount of diverse sea life. This makes it one of the best places in the world to go snorkeling and diving where one can see amazing reefs, turtles, manta rays, and lots more.

It’s not just the underwater world that’s great in Hawaii. The conditions are perfect for windsurfers, sailing, SUP-ing, kayaking, and more that tourists come from all over the world to do. 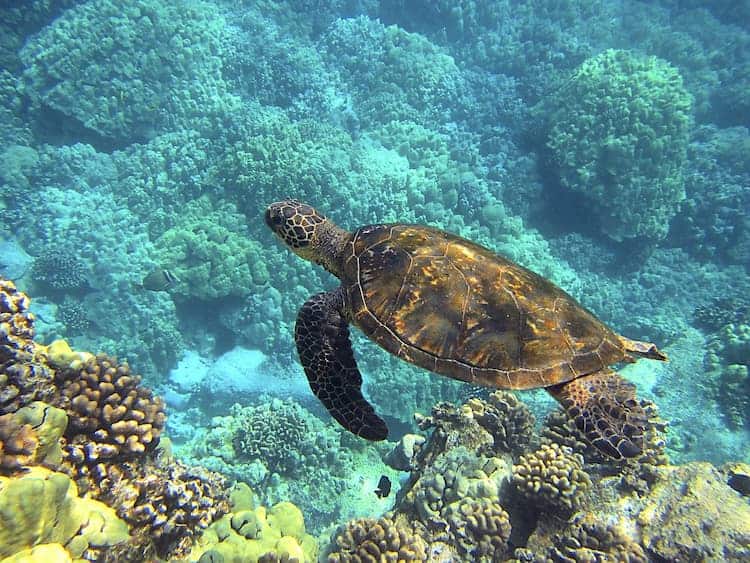 When asking what is Hawaii famous for you have to say diverse fauna. Hawaii is known for its amazingly diverse habitats and wildlife which is all thanks to its isolated location in the middle of the sea which made it a hot spot of evolution, similar to the Galapagos.

You’ll find tons of colorful species that are endemic to Hawaii and some of the rarest Hawaiian fauna include the Laysan duck and the Hawaiian crow which are being reintroduced into the wild.

As well as bird species, Hawaii is known for its amazing marine species such as the endemic Hawaiian monk seal and mammals such as the Hawaiian hoary bat, which are both protected and endangered.

The natural environment of Hawaii is incredibly important to the locals and well protected. Papahānaumokuākea Marine National Monument is one of the many national parks on the islands and covers almost 140,000 square miles of the sea. 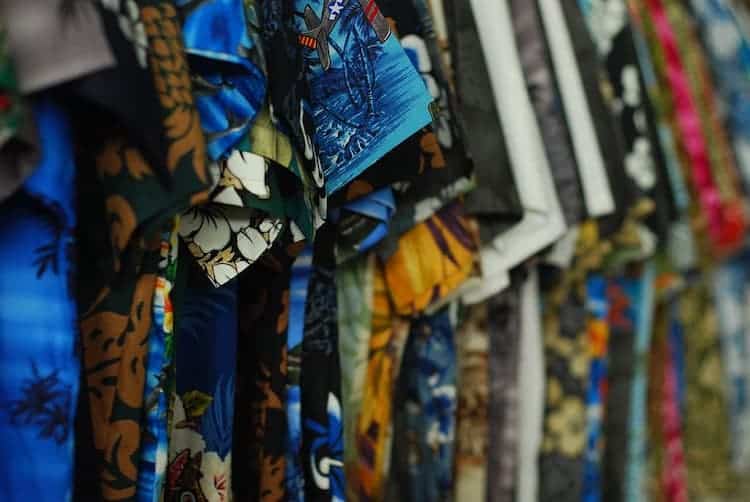 Aloha shirts are a large part of the culture in Hawaii and you can also find them all over the world. I have owned a few Aloha shirts in my time and I’m sure you have too. They are light, often baggy dress shirts with collars, buttons, and are decorated with complex art such as flowers and patterns of the tropics and Hawaii.

Around the world, these shirts are worn on hot days while BBQ-ing but in Hawaii, they are deemed appropriate as casual business clothes. 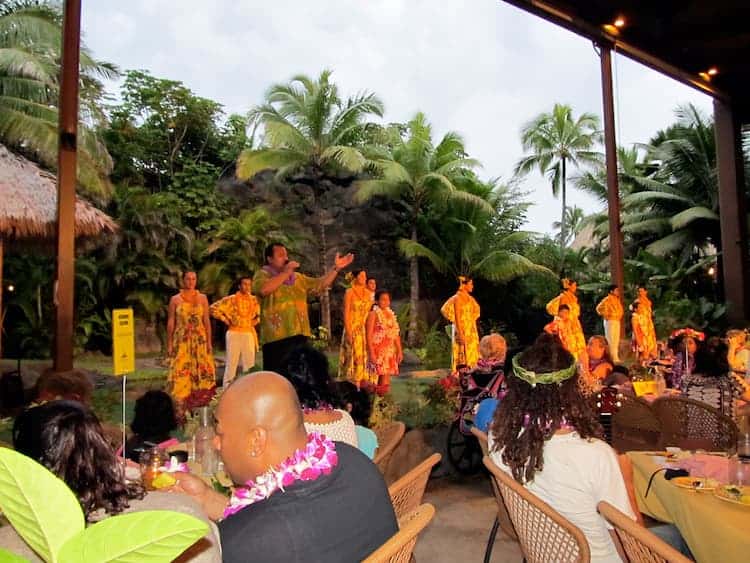 Something else Hawaii is known for that we all love is a good Luau. A luau is pretty much a party with great food, music, and dancing but Luaus didn’t always exist in Hawaii.

If you’re in Hawaii you have to attend a Luau as they are loads of fun and the food is amazing. At a luau, you should try the Kalua Pig, poke bowls, Lomi salmon, spam musubi, and other Hawaiian foods, and have a lot of beer to wash it down and enjoy the luau festivities with.

Luaus are generally celebrated on a child’s first birthday with their Ohana (extended family) and the word luau actually comes from the word for taro leaves which are an ingredient in most of the food served at Luas. 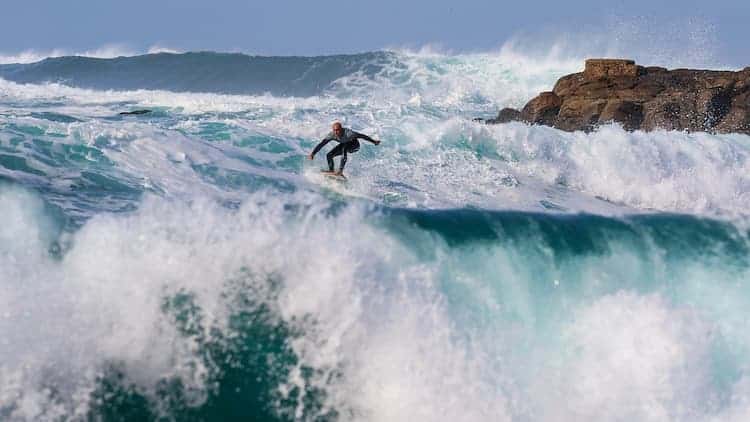 Surfing is something that is synonymous with Hawaii and it’s viewed as pretty much a recreational activity that almost everyone in Hawaii does. Hawaii is without a doubt the most famous place of modern surfing in the world and surfers from across the planet fly into Honolulu to explore all the surf breaks Oahu has to offer.

The main surf area of Oahu is the North Shore which is where many a pro surfer such as Kelly Slater or John John Florence has a home. This is thanks to its amazing breaks such as pipeline and Waimea Bay. 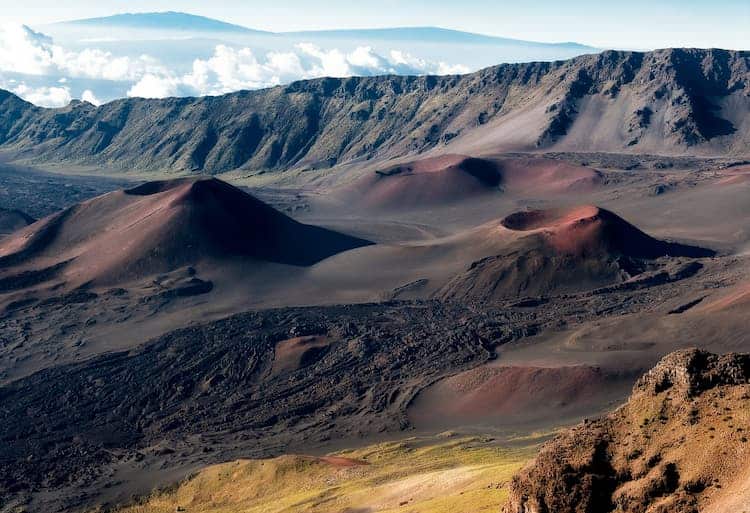 Hawaii is a land of active volcanoes and its islands only exist due to lava flowing up from the earth’s crust on the seafloor and rising above sea level to create each island you see today. Once an island was made from what is called a magma plume, it drifted over time to great space for a new island to be created.

Volcanoes also provide for incredibly rich soils which is why Hawaii is the tropical lush place that it is and the reason why the marine life is quite amazing too.

The Big Island of Hawaii is currently sitting above the magma plume and is made from 5 different active volcanoes which are the youngest in Hawaii and Kilauea has actually been erupting continuously for 35 years. 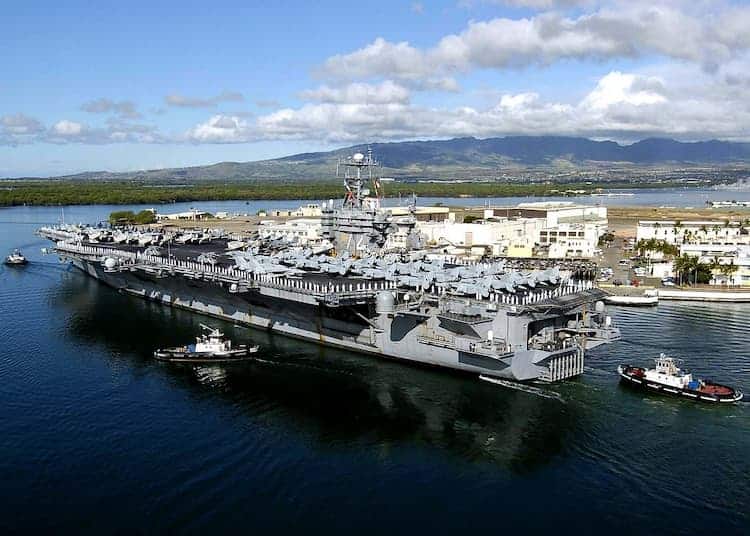 The surprise Japanese attack on the Pearl Harbor navy base in Honolulu during World War II is something almost everyone knows about Hawaii, especially after the Pearl Harbour movie came out.

The attack of over 350 Japanese aircraft completely destroyed the navy base and put over 188 US aircraft out of commission and sank the USS Arizona which you can still dive around today.

This move by the Japanese pretty much crippled the US’ ability to retaliate quickly and intervene in WWII. But, it was this attack on Pearl Harbor that killed over 2000 US troops that drove the US to join the war which pushed the Allies to have the advantage. 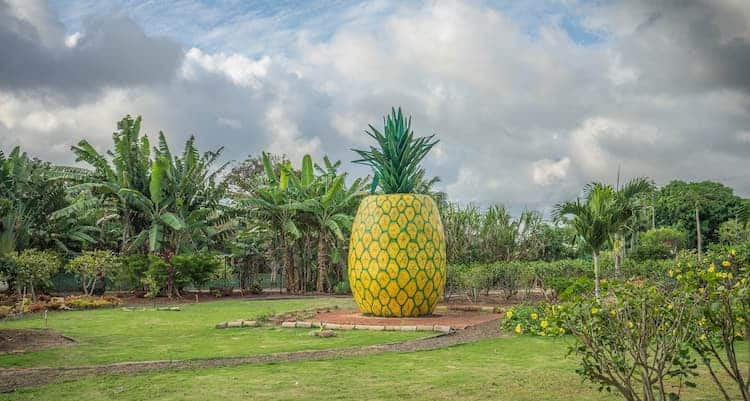 The culture of Hawaii goes back centuries before the USA colonized the islands and they created everything from surfing to Hawaiian food to the Hawaiian language, the Hawaiian alphabet, and rituals designed to entertain tribal chiefs such as the Hula.

If you want to see some of the amazing cultural landmarks on the island you should check out the Iolani Palace, The Merrie Monarch Festival, Dole Plantation, and more. 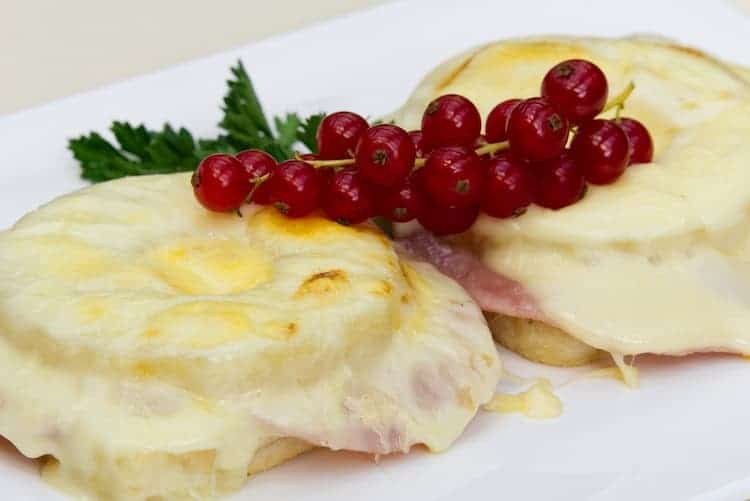 Hawaii is one incredibly fertile place and they grow everything from macadamia nuts, flowers, pineapple, and coconuts, they are even growing coffee beans on the sides of the volcanoes. With the ability to grow some incredible food, it stands to reason that Hawaiian food is also delicious and it is.

No matter what island in Hawaii you’re on, whether it’s Maui or the north island of Kauai, you’ll find that seafood takes up a large part of Hawaiian cuisine as well as food sourced from the fertile soils.

Everything from Hawaiian steak to poke bowls along with BBQ pigs and lush tropical fruits is just some of the yummy things you can eat in Hawaii.

If you want to try something local Hawaiians love, have some spam musubi – a slightly cheaper version of sushi that replaces the fish with spam. Another local dish is Poi which is a filler made from ground taro root mixed with water, or Lau Lau which is a pork shoulder steamed inside taro leaves. 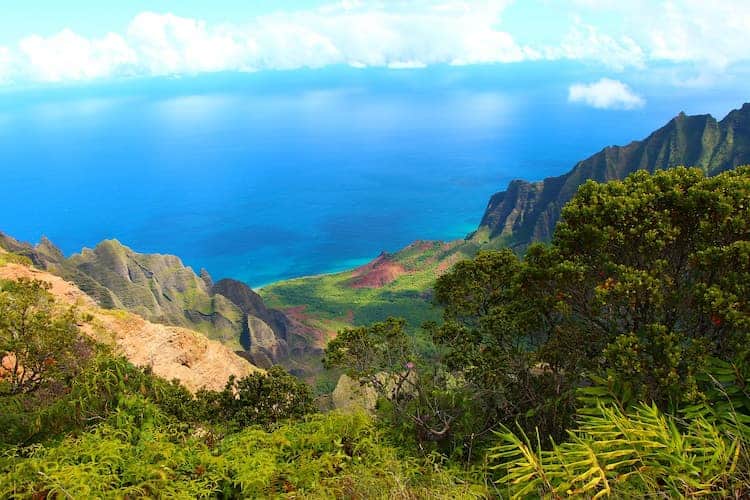 If there is anything Hawaii is known for it is its beautiful scenery. Imagine a mixture of South America rolled into an island or two. You have the dramatic gorges, valleys, and mountains that have been created by the volcanoes, which are also covered with lush tropical forests and plants that are about as beautiful as can be.

When you drop down in altitude in Hawaii, you’ll start to see beaches in every color with some of the most crystal clear seas you could hope for. Every color blue extends from the beaches from bright light turquoise azure shades all the way to the unending indigo shades of the deep blue sea.

While standing on lookout points you can see amazing waves roll in, dolphins, turtles, and more. One of the best ways of seeing the scenery Hawaii has to offer is from the sea on a cruise. You can see the amazing tropical landmasses emerge from the sea in all their glory.