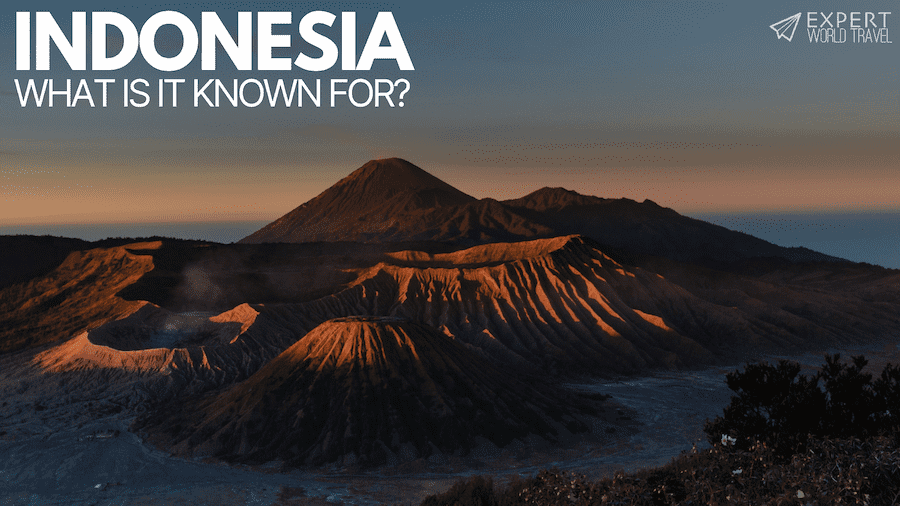 What is Indonesia Known For?

World travelers would be hard-pressed to find a destination more diverse than Indonesia. This should come as no surprise when you consider the size. The South Asian nation is made up of at least 17,000 islands, 6,000 of which are inhabited. The variety in Indonesia goes beyond landscapes. People, cultures, languages, religions….the list goes on and on. You can almost see a hundred different countries with one journey.

Explore before you go with one dozen things Indonesia is known for. 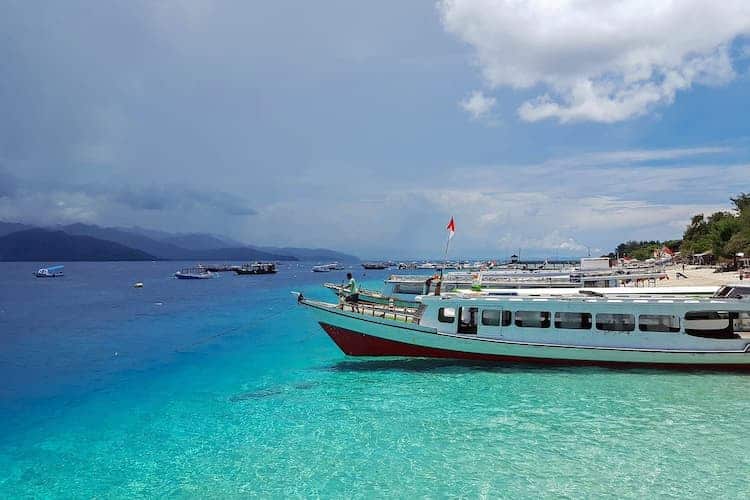 No one is really sure exactly how many islands are in the Indonesian archipelago. The number is ever-changing as more are discovered while others sink. It would take several lifetimes to explore all of these islands. But with so many to choose from, island hopping is an Indonesian adventure not to be missed.

If you’re looking for improved transportation connections and facilities, begin with the Karimunjawa Islands. The offshore archipelago has 27 coral-fringed islands. Most international travelers head to Palau Karimunjawa where the archipelago’s only sizeable town and most facilities are located.

Immerse yourself in local culture and find endless hiking through interior mountains and epic rainforest with a hop over to the Derawan Archipelago. Foreigners are scarce on the uncrowded atoll, so it helps to become familiar with Bahasa Indonesia, the country’s official language.

Since much of Indonesia is so wild and remote, Indonesia attracts many trekkers to some of Asia’s most amazing hikes.

Discover smoking volcanos, ancient temples hidden in vegetation, and national parks with a trek through East Java. Experience inspiring sunrises and giant volcanoes in the Bromo-Tengger region. Mt. Semera is Java’s highest peak and offers a challenging hike that rewards with volcano-studded vistas. To the east, the Ijen Plateau features a crater lake and sulfur mines. Not all of the journey will be remote, however. Surabaya, the regional capital, is a growing, fast-paced city.

For plenty of variety in a fairly condensed area, trek through North Sulawesi. The lowland Tangkoko-Batuangas Dua Saudara Nature Reserve is rich in wildlife and you’ll find stunning volcanic scenery near Tomohon. Stop in Palau Bunaken for a dive among some of the world’s best coral reefs. 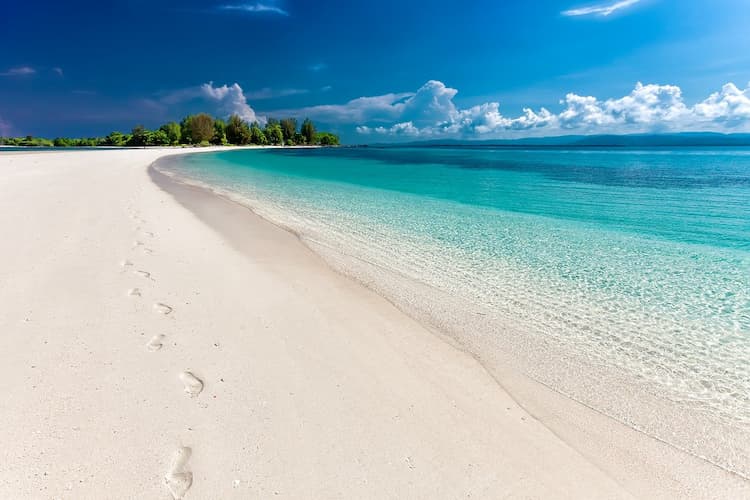 Needless to say, you won’t find trouble finding a beach to languish on in Indonesia. Choosing the ones to visit can be overwhelming.

The Gilli Islands near Bali have beaches that are visions of paradise. Gili Trawangan is a cosmopolitan island with a party beach and upscale accommodations and dining.

With a remote, idyllic setting, the 2 kilometer-long Ngurtafur Beach leads from Warbal Island to the Indian Ocean. It resembles a white sandbank and is surrounded by turquoise water. The beach is reachable only by chartered boat and there are no hotels or restaurants.

Kuta Beach, the most popular beach in Bali is laidback yet lively. It’s fun, festive, and bright with white sand. You’ll find plenty of hotels, restaurants, and beachside bars where you can relax with a drink while the sun sets over the Indian Ocean. 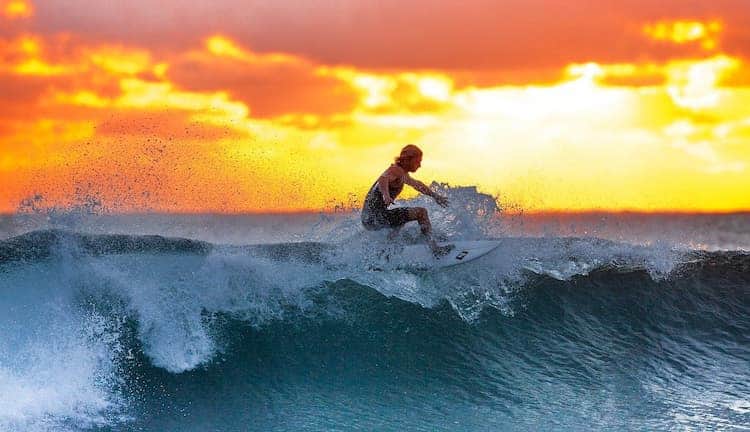 Surfers looking to catch some of the world’s most legendary surf breaks will find them all across Indonesia.

People come from all around the world for the thrilling breaks at Uluwatu in South Bali. It’s been a wildly popular surfing spot since the 1970s surf flick “Morning of the Earth” was released. There are seven challenging breaks not for beginners, and the conditions continuously change.

Surfers will find dozens of challenging breaks around the Mentawai Islands Most are reef breaks, and some are quite shallow. The peak season is between April and October. The off-season waves are suitable for intermediates. The area caters to surfers by offering liveaboard boat charters and land-based hotels, resorts, and camps.

Giant surf breaks aren’t for everyone, and the Indonesia waters are one more way the country shows its diversity. Divers and snorkelers will find clear waters and pristine reefs for discovering underwater treasures from colorful tropical fish to sunken ships.

Some of the world’s best diving can be found from operators and schools in Bali to remote spots hardly touched by humans. Divers can expect to get a close-up look at turtles, manta rays, stingrays, and Mola-Mola.

A mix of warm and cold currents helps nourish the reefs in the waters around Komodo National Park. The rich plankton soup attracts manta rays and whales on the migration route from the Indian Ocean to the South China Sea.

For idyllic tropical snorkeling and diving in serene coral reefs combined with critter-filled muck, Palau Bunaken is the place to go.

Indonesia is home to an endless list of rare and exotic animals, and they aren’t locked in cages. Some of the world’s largest lizards roam freely in the Komodo National Park. The park includes the islands of Komodo, Rinca, and Padar.

In Sumatra, you’ll spy rare birds and elephants at the Way Kambas National Park and learn about efforts to save the endangered Sumantran rhino.

Orangutans roam free and proboscis monkeys play in the trees in the Tanjung Puting National Park in Kalimantan.

Rare birds of paradise admired for their colorful plumage and entertaining mating dances can be spied deep in the forests of Papua. Thousands of years ago, the region was part of the Australian continent, and marsupials such as wallabies and kangaroos can still be found. 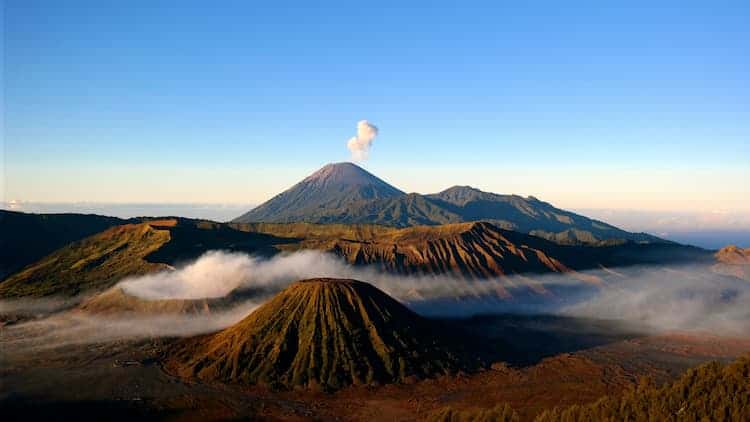 Indonesia is known as the land of volcanoes. There is a total of 147, and 76 are active. It’s true that the United States and Canada have more, but they aren’t as enchanting as the ones in this South Asian country. All you have to do is see Mount Agung on Bali or Java’s Mount Bromo to see the difference.

But perhaps the most surprising volcano is Kawah Igen on the island of Java. The volcano emits hot sulfurous gases that ignite in the earth’s oxygen-rich atmosphere to produce an electric blue flame. At night, the lava glows to illuminate the landscape. 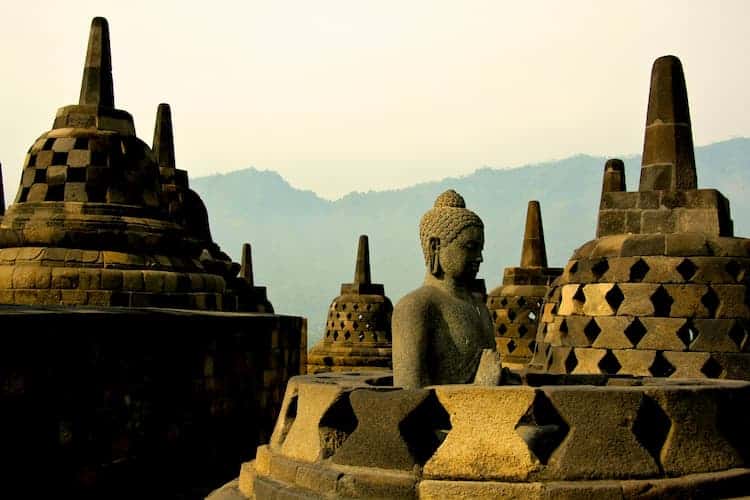 Although Indonesia isn’t as recognized for its temples as the neighboring countries, some of the oldest and most beautiful are found in Java and Bali. The country also boasts the world’s biggest Buddha temple, Borobudur. Dating back to the 8th and 9th centuries, the temple was lost for a thousand years and rediscovered in the 1800s.

Built with two million blocks of stone, it is one of Indonesia’s most important landmarks. The detail in the stone carvings is remarkable, and the bell-shaped stupas are impressive. Each of the 72 stupas has a statue of Buddha inside. The temple is especially beautiful at dawn or dusk.

With over 270 million people, Indonesia is the fourth most populated country on the planet. Traveling through this immense country, you’ll find people who look different, speak different languages, and follow a variety of religions.

The vast population of Indonesia includes more than 700 different languages! A few people speak English, but Indonesian is the most prominent language. If you want to learn a little of the language, it’s best to stick with Indonesian. Javanese is another language widely spoken. About 85 million Indonesians use it as their primary language.

People of many different regions coexist in the country. Although the majority practice Islam, religious laws aren’t strict since so many people practice other religions.

The people are friendly in most Southeast Asian countries (that is one things Indonesia has in common with Singpore), but Indonesians are among the friendliest. Even though the population is highly diverse, attitudes across the country are basically the same. This is true for the average citizen as well as those who work in the hospitality business. Almost everywhere you go, you’ll find a friendly person who speaks English willing to help you.

Of course, you’ll find scammers anywhere you go. But in Indonesia, they are a big minority compared to the friendly ones. You’ll find some of the most congenial Indonesians in Bali. Although they are among the world’s most religious people, they’re never judgemental. 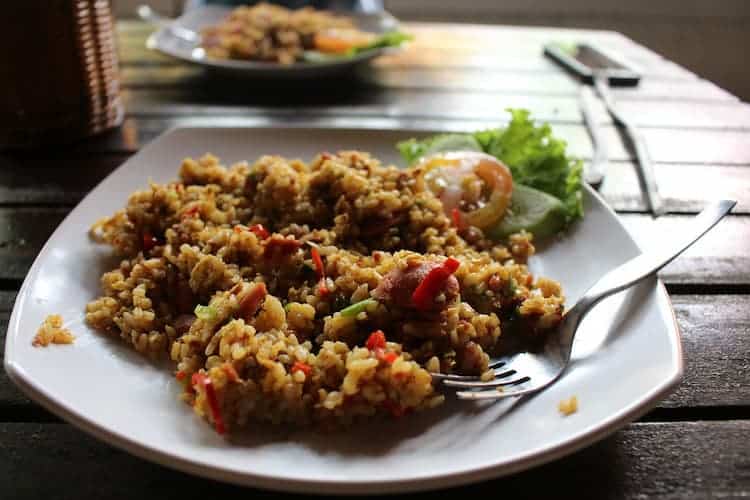 Fried rice is now an international dish, but the fried rice in Indonesia is unique thanks to a sweet soy sauce called kecap that gives it a more intense flavor.

Rica-rica is another specialty of Indonesia that is hot and spicy. Rica-rica is made with two or more kinds of chillis, lemongrass, and shallots. It’s used to season meats and fish. 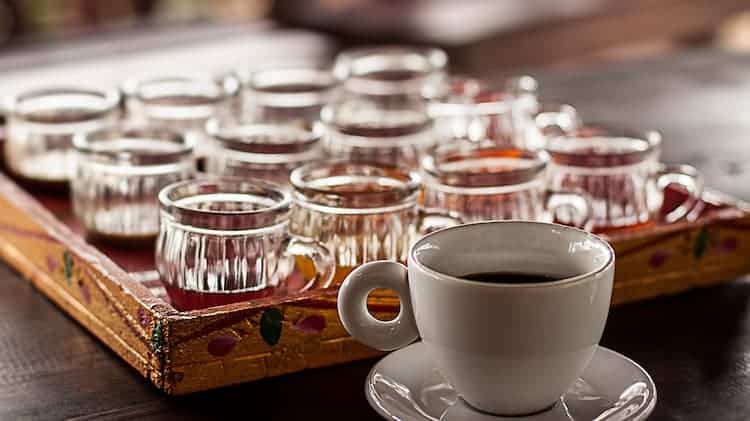 If you’re a big fan of coffee, you may have heard the story of Kopi Luwak. It’s a story that’s not very appetizing to the Western World. It’s made from the poo of a cat-like animal called the Asian palm civet. Cherries are fed to the animal, and when defecated, are used to make the world’s most expensive coffee. How’s that for diversity?

If you are brave enough to try it, animal activists encourage you to do some research first. Some shops and farms keep the animals in horrible conditions and feed them only coffee cherries to produce more Kopi Luwak.