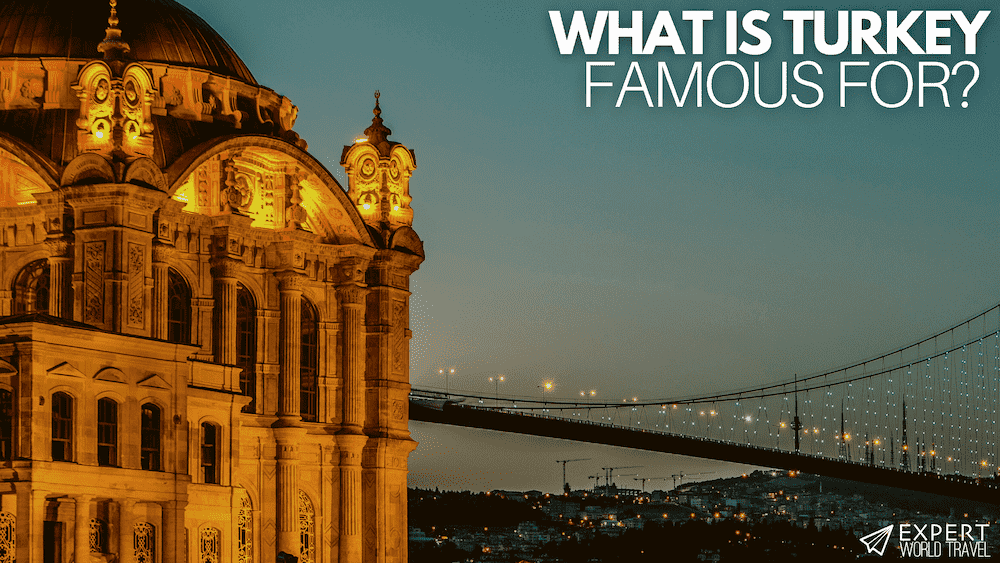 What Is Turkey Known For?

Turkey is one of the only transcontinental countries in the world with part of it sitting in Europe and part in Asia. It has long been a mixing pot of cultures that has brought European and Asian influences together into one amazing country. Apart from being impressive culturally it’s also quite incredible geographically thanks to its high-mountains and gigantic coastline that spans both the Mediterranean and the Black Sea.

Turkey is known for a lot of things, but instead of writing an entire book on the subject, we’ll focus on some of the highlights. 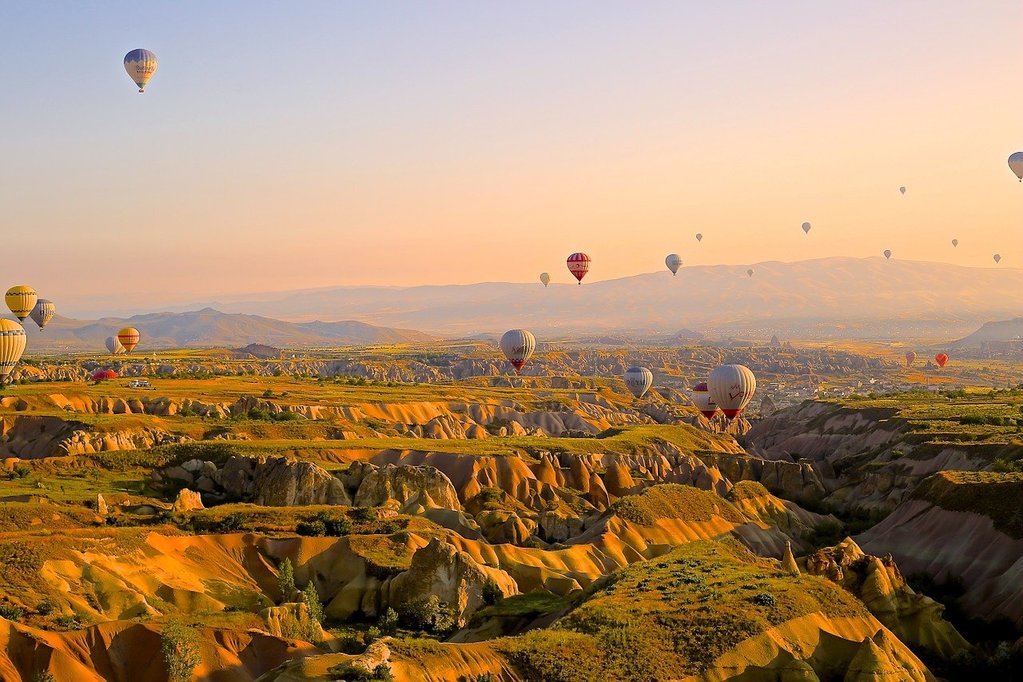 Cappadocia is a semi-arid part of Turkey and is well worth a visit. It’s slap bang in the middle of the Asian side of turkey and is famous for its stunning rock formations. Over hundreds of years, the winds and rains have eroded the rocks into what are now called “fairy chimneys”.  The rocks have become tall and coned shaped and are all clustered in a place called monks valley.

The area has been featured in a huge amount of film sets, and walking through the valley does make you feel like you’re not quite on planet earth. The best way to experience the area is to hop into a hot-air balloon. There are hundreds of hot air balloons to choose from, and during busy times the horizon is littered with them.

It suffices it to say, if you’re heading to Turkey, a trip to Cappadocia should be one of the top things on your to-do list.

You have probably heard of Turkish coffee, and you might even think it’s the nation’s national drink, but Turks actually drink way more tea than they do coffee, and it’s probably one of the only things they have in common with the English.

As you walk down the streets of Turkey, you’ll notice that there is a tea shop on every corner and all the men will be sitting outside getting their fix as often as they can. There are also delightful tea gardens that are worth spending some time in too.

The tea in Turkey is served black and in pretty little tulip-like glasses, and it’s drunk sweet with at least three spoons of sugar. You can, of course, still, find tasty Turkish coffee everywhere too, and if you’re brave you’ll follow the Turkish tradition of drinking it “black as hell, strong as death and sweet as sugar.”

Thanks to its geographical location, Turkey is full of beautiful Mosques, a lot of which are found in Istanbul but you’ll also find them in other cities in the country too.

The mosques are, of course, religious centers where Muslims can go and pray each day, but they are also tourist attractions. OUtside of prayer time, you can visit the mosques and gaze upon the stunning architecture and artwork that comprise them. They are a huge inspiration for Islamic art in the country and you’ll see why when you look at the paintings inside.

The most famous mosques in Turkey are the Blue Mosque and Hagia Sophia. Both are found in Istanbul and were built back in ancient times. You’ll find tombs, amazing art, and great architecture at both of them. 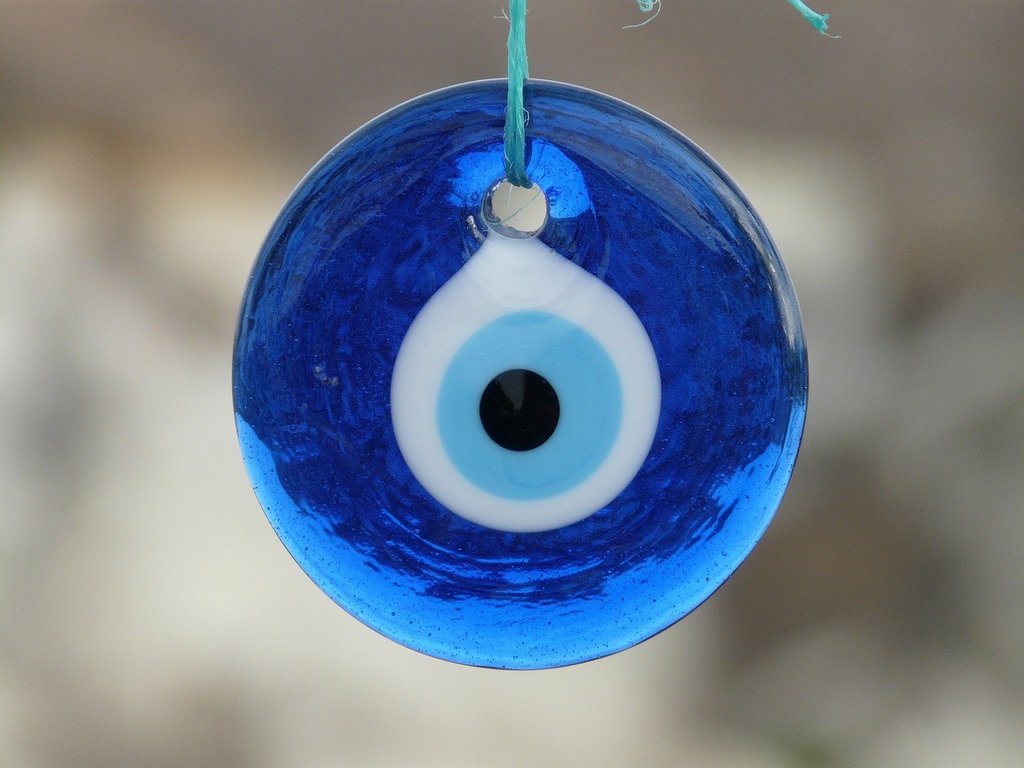 One of the most iconic souvenirs and something you’ll see all across Turkey is the Evil Eye, known as ‘Nazar‘ in Turkey or Amulet elsewhere. You see Narar everywhere you go in Turkey. From shops and cars to offices and restaurants, the Evil Eye will be hanging somewhere and everywhere.

A typical Nazar is hand made from blue glass in the shape of a teardrop and has a blue, white, and black painting on it to turn it onto an eye. The Nazar is, of course, not actually evil, but is used to protect oneself from evil. It’s all myth and legend, but the Nazars are quite beautiful and they are a great size for putting into your bag and taking home as a souvenir.

You’ll find them everywhere, but if you want to have a large choice to pick from, then look for them at the Grand Bazaar.

Everyone has heard of Turkish Bazaars and a major reason that a lot of tourists go to Turkey is to go shopping. Some people even run their business by going to the bazaars to bring back items to sell at their shops at home. You’ll find exceptionally unique products at Turkish bazaars and some great deals too.

It’s a lot of fun wandering through them, seeing all the products, hearing the haggling sounds of selling and buying, and of course picking up something to take home.

The most famous Turkish Bazaar is the Grand Bazaar in Istanbul. It’s one of the largest and oldest covered markets in the world and is home to over 4000 different shops. The Grand Bazaar was actually built in order to provide a means of income to support the building of the Hagia Sophia Mosque I mentioned above, so as you wander its streets, it’s worth keeping in mind the Grand Bazaar’s historical importance.

A kebab is defined as anything that is cooked on a rotisserie or grilled using a skewer or grilled on a skewer, and Turkey is the home of them. The kebabs in Turkey are far more diverse and well prepared than those you might find at home. Their diversity seems to know no ends, and you’ll need to try at least five different types of kebabs while you’re there.

The Kebabs range from lamb, beef, chicken, and fish to vegetable and vegan options. They are all prepared using some kind of spice mix added and they taste quite amazing, especially in Turkey.

You won’t find it hard to stumble upon a Kebab house in turkey, there is one on almost every street. But there are of course some better ones to choose from. One of the best Kebab restaurants in Istanbul is Hambi. It has an amazing view looking over the sea, and the food is traditional and absolutely delicious. It’s well worth a visit while you’re in Istanbul. 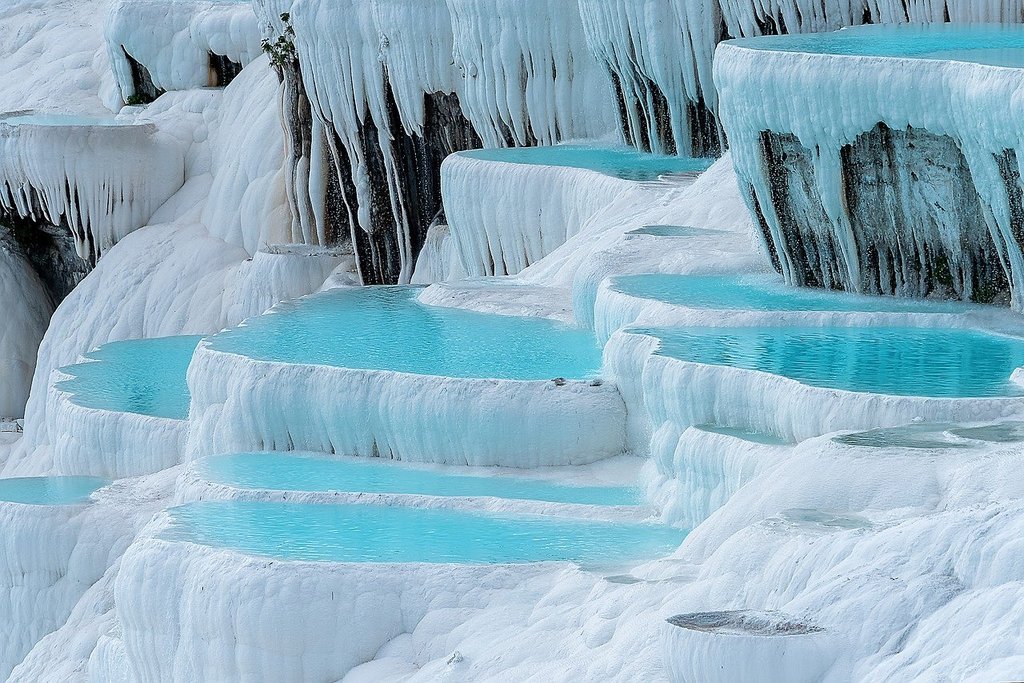 If you’re going to Turkey, you should reserve 3 days of your visit and head to the Pamukkale Cotton Castle. It sits in Denizli, in southwestern Turkey, and is about a 6-hour drive or 1-hour flight from Istanbul.

Pamukkale Cotton Castle is one of the most stunning natural wonders in the world and is considered a UNESCO World Heritage. Over 2000 years or more, the hot springs in the area have deposited limestone walls that from afar look like a cotton castle. The walls are bright white and some of them form pools that are filled with azure blue water. They are absolutely beautiful.

You can also swim in Pamukkale’s thermal pools, and stare over the valley into what looks like something out of a Disney movie. The thermal pools were once used as a Roman Spa Resort, and you can all see remnants of it today.

Do you love eating Cadbury’s whole nut chocolate? Or Ritter Sports dark chocolate hazelnut bars? Chances are, the hazelnuts in them have come from Turkey. Turkey is responsible for 75% of the world’s hazelnut exports, and if you have ever flown Turkish Airlines, what nuts do you think they serve? yes, it’s hazelnuts.

Almost all of Turkey’s hazelnut orchards are found on the shores of the Black Sea. The climate and soil are perfect for hazelnut production and the Turks have been growing them for over 2000 years. It’s a very important industry for the Turkish economy and while you’re there, you should indulge and enjoy as many as you can.

Father Christmas is from Turkey

Christmas is right around the corner and Santa Clause is coming to visit, and did you know he’s from Turkey? Saint Nicholas, the original Santa was actually born in Patara, Turkey.

It’s a handy fact you’ll want to share around the Christmas dinner table this year, but Saint Nicholas wasn’t just born in Turkey he lived there, and his generosity was felt by many a Turkish child over his lifetime. You can even find a monument to him and Church named after him in the Turkish town of Myra.

The ruins of two of the seven wonders of the ancient world can be found in Turkey. The Temple of Artemis at Ephesus and the Mausoleum at Halicarnassus are both ancient buildings that had a lot of Greek influence.

The Temple of Artemis at Ephesus is found in Selcuk, just a few hours north of Bodrum, and is well worth a visit if you’re in the area. 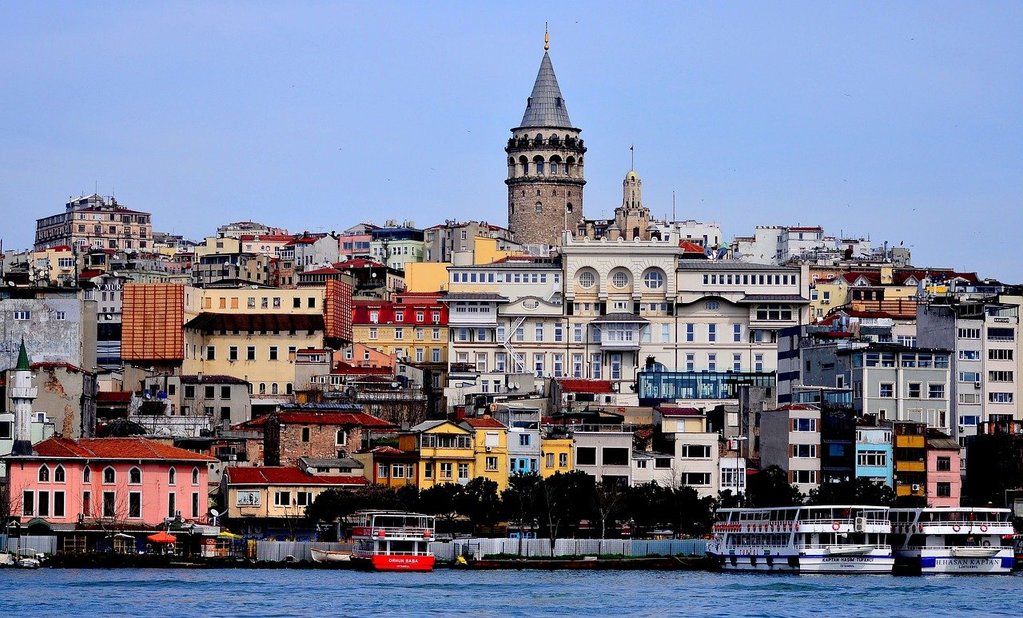 You will have heard of Istanbul, and if you know anyone who has been there, they are never shy about telling you quite how amazing their time was there. You may think it’s the capital of Turkey, well, culturally you’d be right, but officially it’s Ankara.

Istanbul is incredibly unique, for more than one reason. Firstly, it is the only city in the world, that has the sea running through it. To the north is the Black Sea, and to the south is the Sea of Marmara that joins the Mediterranean, and right down the middle of Istanbul is the Bosporus that joins the two together.

Half of Istanbul is also in Asia, and the other half in Europe, so you can swap continents in a matter of minutes. It’s also one of the only city’s in the world that has been the capital of three empires, the Roman, Byzantine, and Ottoman empires all had their throne there at some point.

If the above isn’t enough to describe Istanbul’s uniqueness and get your travel needs flowing, you’ll also find the Grand Bazaar, the Blue Mosque, Hagia Sophia Mosque, and Topkapi Palace in Istanbul, plus a load more cultural sites and experiences to immerse yourself into.

The people of Istanbul are also quite extraordinary. They’re friendly, interesting, and they enjoy life with smiles upon their faces and laughter booming from their chests. They also know how to have a good time, and a night out in Istanbul can be one you’ll never forget

Almost every variety of chocolate box you’ll open this Christmas will have a Turkish Delight inside it. In Turkey, a Turkish delight, or Locum, is either given as a present or is eaten after a cup of Turkish coffee to cleanse your palate.

They are made from sugar and starch and come in a lot of flavors that can include hazelnuts, pistachios, and even rose water. The word Locum is from the Arabic – al-lukum, which directly translated means throat comfort. Hence the connection to using a Turkish delight as a palate cleanser.

It’s not precisely known when Turkish Delights first came about, but Turks have been making and eating sweets since the 18th century. Local legends say that a man called Haci Bekir Efendi invented them and that he was the confectioner of Ottoman sultan Ahmad who gave Turkish Delight to anyone important who visited, from dignitaries to foreign royalty, and this is how the international fame of the Turkish delight began.

There you have it, some of the top things Turkey is known for. There is a whole lot more to discover about Turkey, and we have only just covered the tip of the iceberg here. If you have never been, it’s certainly worth a visit, and if you have been, it’s more than likely you’ll be ready for another visit.

Turkey really does have everything, from a rich culture and history to stunning coastlines and natural wonders, there is something for you to fall in love with while you’re there.