Most Famous Mosques In Istanbul

If there is one thing Istanbul is known for it is the incredible architecture that you will find all over the city and one of the best bits are the beautiful mosques in Istanbul. Istanbul’s mosques are magnificent but with over 3000 mosques in Istanbul, it’s hard to know where to start.

Luckily, we have gathered up the most beautiful Mosques in Istanbul below for you so you can choose which ones to visit during your trip. 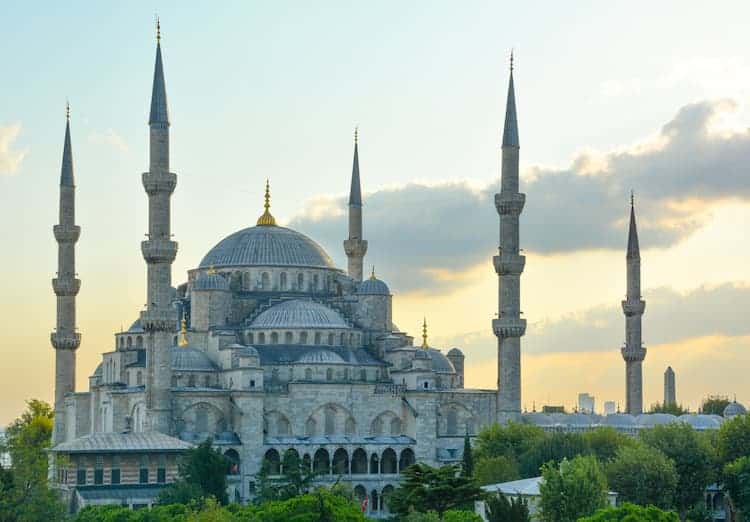 The Blue Mosque, also known as Sultanahmet Camii is probably the most famous mosque in Istanbul and one of the most beautiful mosques in Istanbul too.

The Blue Mosque has a large historical context as it was built in the 1600s and is thought of as the only remaining great mosque from the Ottoman classical period when the Byzantine church and Ottoman mosque development crossed paths.

If you know your architecture, you’ll notice the ancient mosque combines both traditional Islamic architecture with Byzantine elements.

What makes the Sultanahmet mosque such a lovely mosque to gaze upon is the blue tile work that covers its interior. The mosque complex also features size minarets which are unlike most mosques in Turkey which have four or two.

This splendid mosque was built during the reign of Ahmed I between 1609-1616 and it is still used as a mosque today but it is primarily one of Istanbul’s most popular tourist attractions. 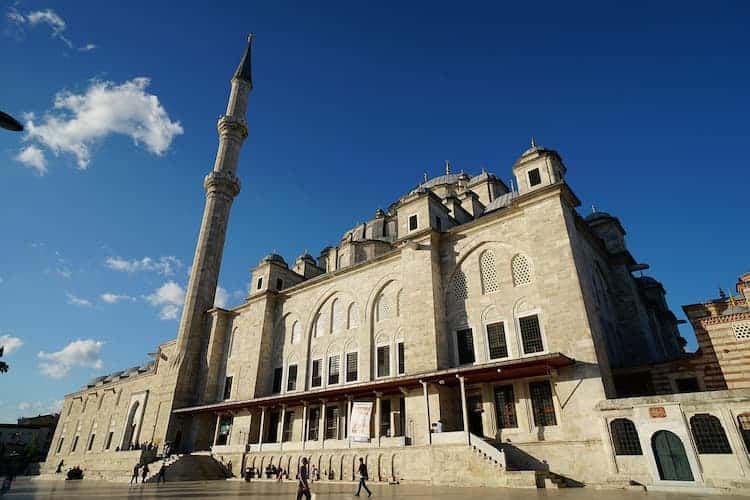 The Faith Mosque is another of the most beautiful mosques in Istanbul that you should visit while traveling there.

The Fatih Mosque was the first mosque built in Istanbul and it is one of the most important religious buildings in the city today. It was built way back in the 1460s as a Byzantine Era church until it was converted to a mosque under orders from the Ottoman Sultan Mehmet Fatih.

This is a huge mosque and was the largest mosque in Istanbul until the Süleymaniye Mosque was built later on. What makes this particular mosque so beautiful is the amazing color patterns created by the simple decorations that make it seem like the colors are dancing together.

It was designed by the famous architect Sinan who was a Greek and it showcases designs from Hagia Sophia but it’s a lot closer to Iranian architecture than Byzantine architecture. It was sadly partly destroyed in an earthquake but was reconstructed in 1776 and still features its original design.

The Arab Mosque is also one of the most beautiful mosques in Istanbul that deserves a visit. It is the only mosque in Istanbul that started off as a Roman Catholic Church until it was converted into a mosque.

The church was built way back in 1325 near an old Roman Catholic chapel but was converted to a mosque in the 1470s by the Muslim Ottoman empire. The mosque was then given to the Arab Muslims that were kicked out of Andalucia in 1492, hence the name “Arab Mosque”.

Having been a Catholic place of worship prior to being a mosque, the building, unsurprisingly, has an Italian Gothic style to it and featured a bell tower with lancet windows which was converted into a minaret.

During the mosque’s rebuild, a lot of Genoise tombstones were found which you can see today in Istanbul’s Archeological Museum.

The Suleymaniye Mosque is one of the largest mosques in Istanbul plus one of the most popular attractions and sights in the entire city and in modern Turkey too.

The Suleymaniye Mosque was built in the 1500s and was designed by the famous Ottoman architect Mimar Sinan. He built the grand mosque for Sultan Süleyman, known as Suleiman the Magnificent.

The Süleymaniye Mosque features both classical Ottoman architecture with Byzantine church Hagia Sophia architecture too. You’ll find large domes, tall minarets, and half domes. The courtyard is incredibly impressive and very much sets it apart from other mosques.

Something you might not know is that the Süleymaniye Mosque was a lot more than a place of worship. Being the biggest mosque around, the Suleymaine Mosque served also as a library, kitchen, hospice for the poor, an Islamic religious school, and a hospital too.

You will be able to explore all of this within the grounds and see the tombs of the Sultan, his wife Hürrem, and the great Ottoman architect Sinan. 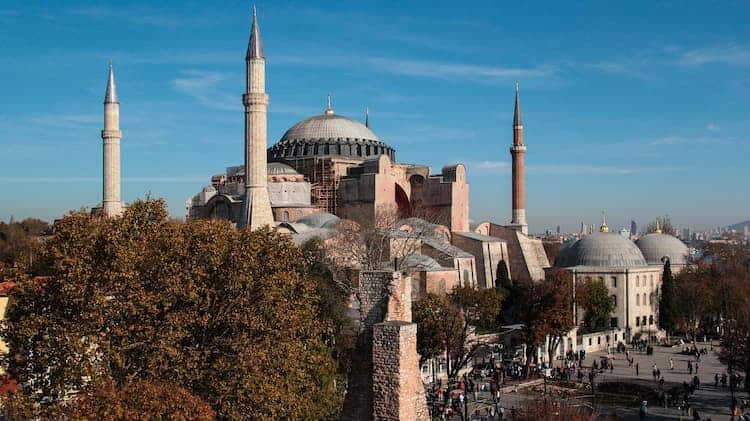 Today the Hagia Sophia Mosque is actually a museum but it is without doubt one of the most important and beautiful mosques in Istanbul that you simply must see.

The Hagia Sophia started out as the Greek Patriarchal cathedral of Constantinople after it was built in 360 AD until it was converted into a mosque in the 1450s. It was the largest cathedral on the planet for more than 1000 years, which is quite a claim to fame.

The Hagia Sophia is most famous for its incredibly huge dome and it is considered to have “changed the history of architecture,” and is thought of among scholars as to the embodiment of Byzantine architecture.

It wasn’t until 1931 when the mosque was converted into a museum. When you visit be sure to see the mosque’s interior walls as they are decorated with stunning mosaics and the marble pillars are beautiful too. 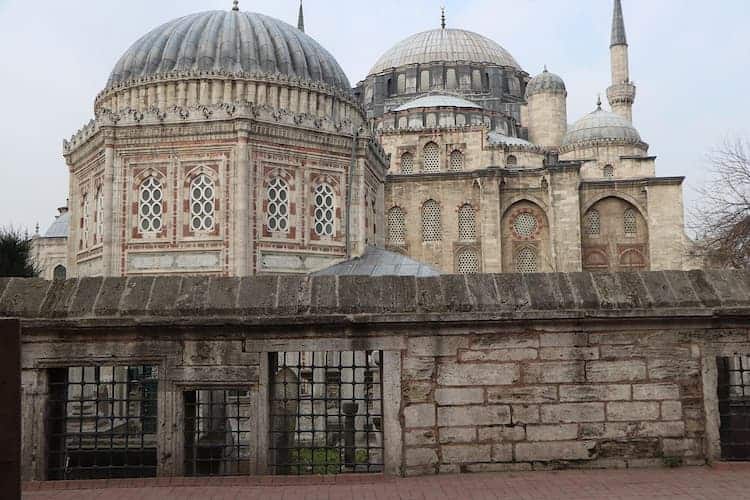 One of the beautiful mosques in Istanbul you simply have to see while in the city is the Sehzade Mosque, also known as “Prince’s Mosque”.

This mosque was built in 1543 under the orders of Sultan Suleiman I in memory of Prince Hurrem Mehmet, the sultan’s eldest son who unfortunately died at the age of 21 from smallpox infection.

It was the first of the mosques designed by chief architect Mimar Sinan and it took 5 years to build. It was finally completed in 1548. It’s thought of by architectural scholars as this architect’s first exemplary showcase of Ottoman architecture.

Unlike other mosques both the exterior and vast interior are covered with decorations and feature things like sculptures on the minarets and lots more. 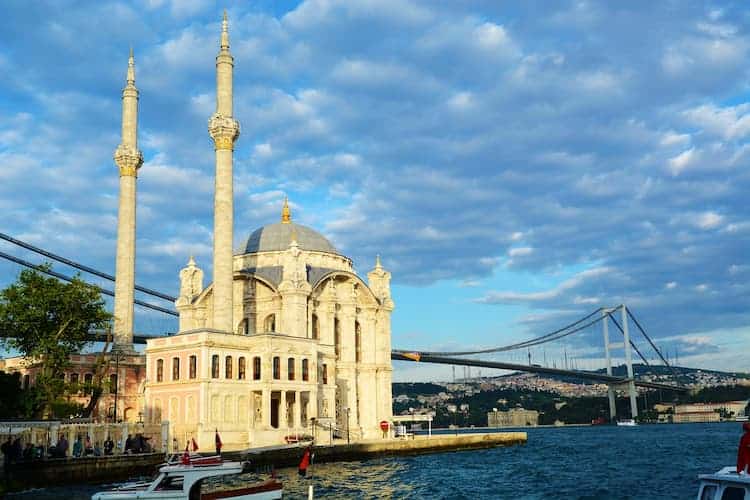 The mosque was built between 1853 and 1856 having been commissioned by Sultan Abdul Majid. It was designed to have pillars and foundations that run 20 meters deep to ensure it could survive any earthquakes.

This mosque was designed by architects Nigoğayos Balyan and Garabet Amira Balyan, a father and son architecture team from Armenia. These same architects also designed the amazing Dolmabahçe Palace and its mosque.

You’ll notice a Baroque style architecture in this mosque along with two main sections including a place for worship and another space for the Sultan’s protocols. You’ll find stunning ornate patterns and a great dome, and if you catch it at sunset you’ll be blown away by the colors.

The Sakirin Mosque is unique in many ways and being a relatively new mosque having been built in 2009, it brings the modern world with it.

Firstly, this is the first mosque to ever be created by a female architect in Turkey and it has paved the way for female architects since. It is also the most carbon-neutral Mosque in the country too.

It was commissioned by a private foundation called Şakir and built in the memory of Semiha and Ibrahim Şakir. The interior design features some great art and the main piece is the water drop glass chandelier which symbolizes “Allah’s light should fall on worshipers like rain.”

It’s worth going to the mosque just to see the glass chandelier in my opinion. Another great thing about this mosque is that the women’s section is just as great as the men’s. 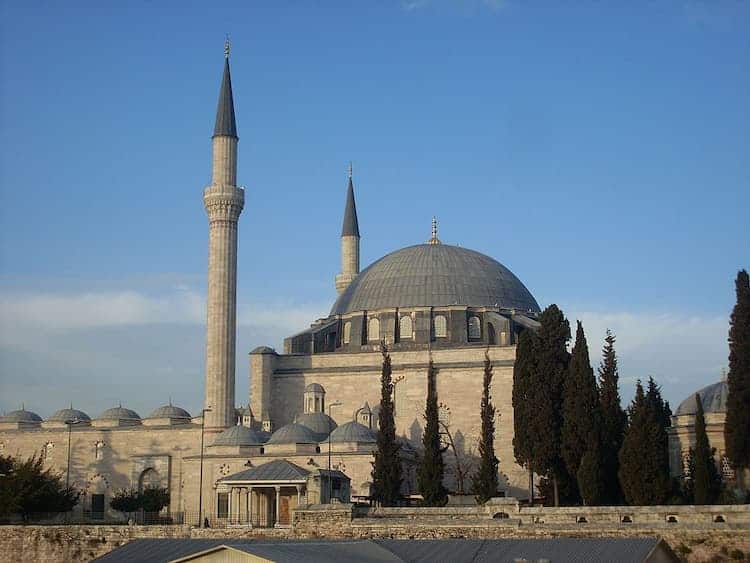 The Yavuz Selim Mosque was commissioned by Suleiman the Magnificent in order to commemorate the death of his father, Selim I. The mosque was to be built in the area of Cukorbostan in Istanbul near to the Golden Horn.

While the mosque does feature Ottoman architecture from the Ottoman Empire, no one knows who the architect responsible for the design was and it is still a mystery to this day. But, it is thought that whoever designed it tried to copy the architectural style of Mimir Sinan.

Nevertheless, whoever designed it did a great job and it remains one of the most beautiful mosques in the city.

The mosque features a stunning dome, two minarets, and lovely gardens and it sits on a hill overlooking the Bosphorus too, giving great views of the city. Inside you will find the tombs of Selim I, Sultan Abdulmelcid I, and the four children of Suleiman the Magnificent. 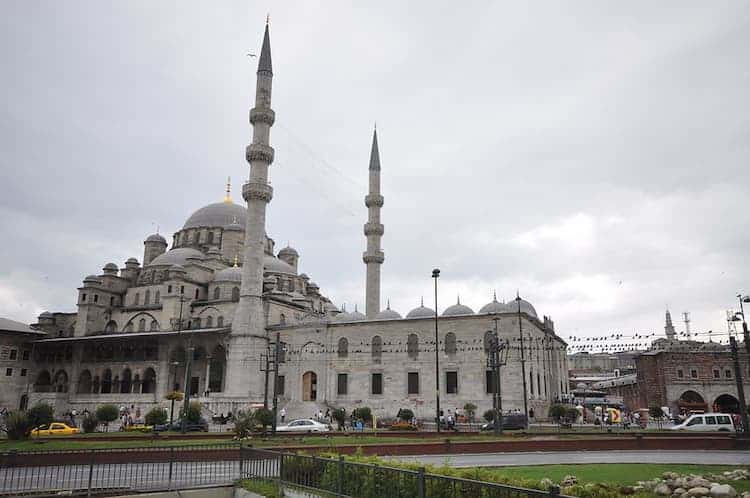 The New Mosque has a bit of a torrid building history. It was commissioned by Safiye Sultan, the wife of Sultan Murad III, and the building began in 1597 but stopped soon after due to political issues.

The remaining structure slowly fell apart and was almost completely rubbed out in a fire in 1660. Nothing happened with the project until Mustafa Ağa the imperial architect suggested to the mother of the Sultan that they should finish building the mosque.

It was finally fully completed in 1663 and is one of the most popular mosques in Istanbul today. Inside you’ll find stunning Ottoman tile work called İznik tiles. They are blue and white and decorate the interior beautifully.

The Chora Mosque has had a very changing history starting off as a church in the 300s AD and then converted to a mosque in the 16th century. It then became a museum in 1945 and then went back to being a mosque in 2020.

Architecturally you will notice the Byzantine era influences as the building was restored as close to the original as possible. Inside you will find stunning mosaics that are unusual in a mosque and they are covered up during times of worship

The Rustem Pasa Mosque is another mosque from the Ottoman Empire that was also designed by the Ottoman architect Sinan.

The mosque was built in 1563 under the commission of the grand vizier Rüstem Pasha who was the son-in-law of Suleiman the Magnificent, a minister, and a part of the military. It was built on a hill which included a complex of shops whose rent was intended to support the mosque financially.

Inside the mosque, you will find the best example of Iznik tile work in Istanbul with full walls covered in the beautiful blue and white tiles. These walls are the height of Ottoman decoration and are connected to the entire empire. 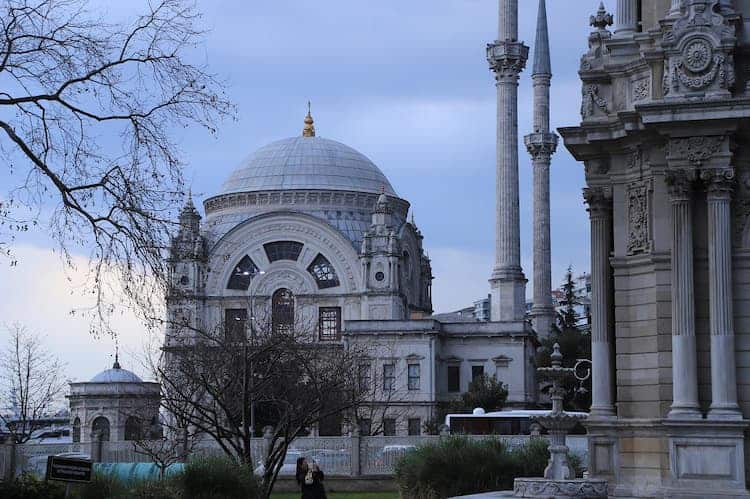 The Dolmabahce Mosque, also known as the Sultan’s Mother Mosque, was first opened in 1985 after two years of construction. It is without doubt one of the greatest mosques on the Asian side of Istanbul and it features an incredible location to0, sitting on the coast in Kabatas not far from the Dolmabahce Palace.

It was designed by the architect Nigogayos Balyan and features a blend of Ottoman architecture and western architecture too. It was commissioned by Ottoman Sultan Abdul Majid.

The Sultan Eyup Mosque is located close to the Golden Horn on the European side of Istanbul in the Eyup District. It was built in 1458 and was the first mosque to be built after the Ottoman conquest of Constantinople.

The mosque is a grand building with a stunning dome and a few minarets and it features some architecturally stunning features. Inside the mosque complex, you’ll find a separate building with the tomb of Abu Eyup El Ensari as a lot more graves are outside of it too. You will also find possessions belonging to the Prophet Mohammed outside the mosque too.