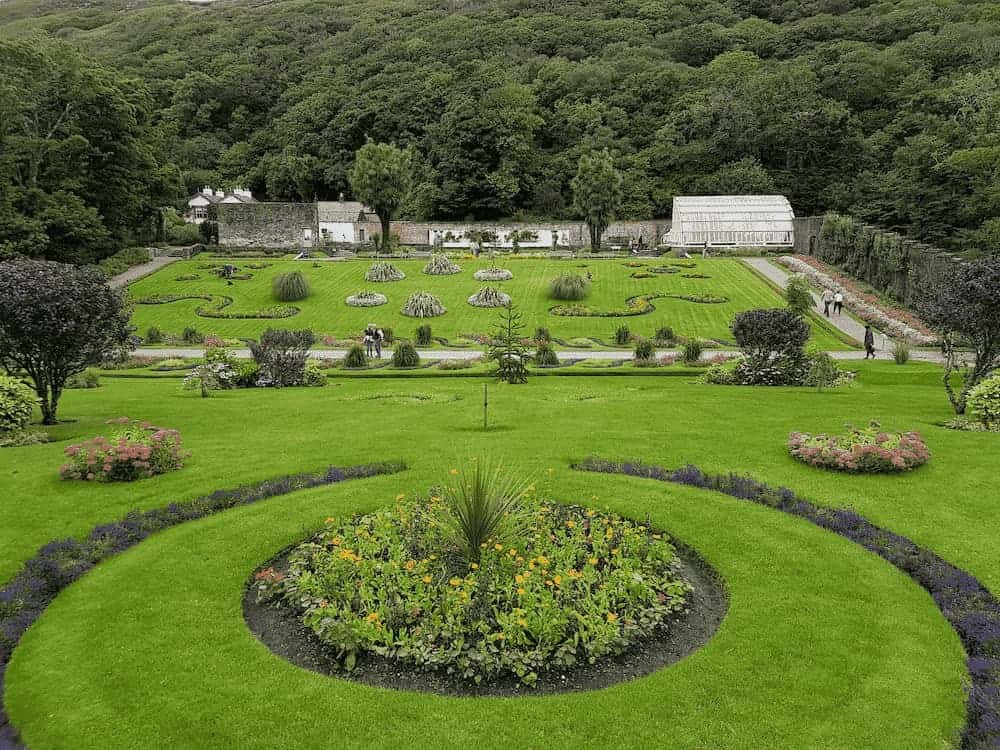 Situated in the heart of the Connemara Mountains in Ireland’s County Galway, the Victorian Walled Garden is part of the Kylemore Abbey. Looking back in time, the award-winning garden was built by Mitchell Henry as a part of the Kylemore Estate between 1867 and 1871. Henry, the son of a wealthy Manchester cotton merchant, was a physician and Member of Parliament. After his father died, Henry used his sizable inheritance to construct a fairytale castle on the shore of Lough Pollaacapull. The castle has romantic significance because it was where he and his wife had spent their honeymoon.

The six-acre garden is divided naturally by a clear mountain stream. Flowers grow on one side in what is called the pleasure garden. The kitchen side of the garden is mostly devoted to growing fresh produce. The garden was one of the last of its kind to be built in Ireland during the Victorian Era. It’s also the only walled garden to be built in the middle of a bog. At that time, the garden was so far advanced, it could be compared in grandeur to London’s Kew Gardens. A total of 21 glasshouses were built for growing exotic flowers and fruits. They were heated by three boilers and a system of underground hot water pipes.

Along with the historic castle, now the abbey’s main building, the Victorian Walled Garden at Kylemore has a beguiling history. Four years after its completion, Mitchell Henry’s wife passed away from dysentery while on holiday in Egypt. The estate was eventually sold by the Henrys to The Duke and Duchess of Manchester, and later to Ernest Fawke. The gardens went neglected with the pleasure garden becoming a wilderness. The glasshouses caved in leaving only their brick bases.

As decades passed, the estate was eventually sold to an Order of Benedictine nuns in 1920 who were escaping war-torn Belgium. By 1996, with the abbey building still occupied by nuns who used the gardens, the Benedictine Community took on the task of restoring the garden to its original glory. The restoration was supported by grants, donations, and a large bank loan. The Victorian Walled Garden opened to the public in 1999 and won the prestigious Europa Nostra Award in 2002.

To date, two of the innovative glasshouses, the Head Gardener’s House, and Workman’s Bothy have been restored. Currently, there is a vinery, vegetables and herbs used by the restaurant, banana trees, and an array of beautiful flowering plants. The Tea Rooms are now open and serve homemade delights from May to September. A shuttle bus takes visitors out to the Walled Garden from the abbey every 15 minutes. Visitors are also welcome to take the 20-minute woodland walk.