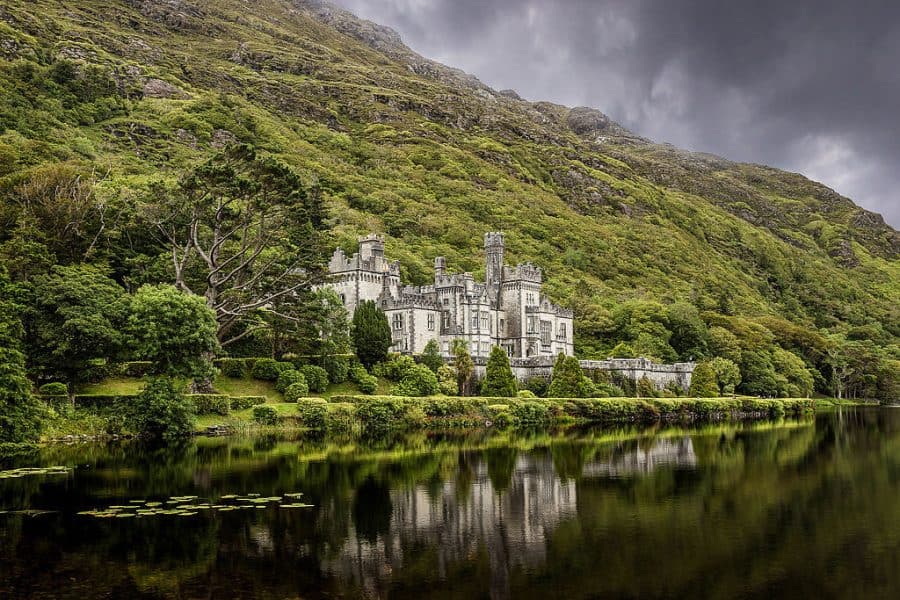 The History of Kylemore Abbey

Kylemore Abbey in Connemara, Ireland is a former castle with an intriguing history and a captivating location. Originally built between 1868 and 1871, the castle has passed through the hands of a distinguished financier and politician, was visited by a king and queen, and bought by a duke and duchess.

Since 1920, the abbey has been home to a community of nuns of the Benedictine Order. The original nuns, known for tatting Valenciennes lace, took ownership of the castle after the last owner’s financial ruin. They fled Ypres, Belgium after the First World War rendered their city an empty shell. The Benedictine Community opened a world-class boarding school for girls, and, with the help of donations and local artisans, set about the task of restoring the estate to its original glory. The estate included the abbey, Gothic Church, and Victorian Walled Garden.

Let’s explore how a romantic gift of a castle became an Abbey for Benedictine nuns.

Imagine a sunny afternoon in 1871 on the shores of a lake in the bewitchingly beautiful Irish countryside of the County Connemara. A man and a woman are gazing lovingly at the fairytale castle the man had built for the women on the spot where they honeymooned 16 years earlier. The job had taken four years and 100 men, but as the couple admires their home’s reflection in the lake, they know the wait has been worth it.

Today, the Benedictine Community at the abbey and millions of visitors from around the world know that the couple was Mitchell Henry, a wealthy financier and member of the Parliament in Great Britain and Ireland, and his wife Margaret.

Mitchell Henry was born in 1847 near Manchester, England. He was the second son of Elizabeth and Alexander Henry, a very wealthy cotton merchant and Member of Parliament for South Lancashire. Mitchell earned a medical degree from University College London and was a successful surgeon by age 30.

Mitchell married Margaret Vaughn from County Downs in 1852. The couple honeymooned in Connemara, Ireland, and fell in love with the enchanting countryside of mountains, lakes, and bogs. They would return often, staying at Kylemore Lodge. Upon Alexander Henry’s death in 1862, Mitchell used the sizable fortune he inherited to build a castle that would become home to the couple and their nine children. The fairytale castle, a romantic gift to Margaret, was built by the shore of a peaceful lake.

Henry Mitchell spared no expense. The huge facade was made of granite shipped by sea to Letterfrack from Dalkey and limestone from Ballinasloe. The castle covered 40,000 feet and had 70 rooms. There were 33 bedrooms, four bathrooms, four parlors, a ballroom, a library, and special rooms like a schoolroom and a gun room. The castle also provided offices and residential quarters for staff and various servants. The final cost to build was £18,000. That’s about $3 million USD today.

From Physician to Politician

Mitchell Henry eventually gave up his career as a physician to manage the family business and become a Member of Parliament for the County Galway. Over the years, Margaret gave birth to five daughters and four sons as their blissful marriage continued on the land where they had honeymooned.

At that time, most of Ireland was still in the recovery period following the Great Potato Famine of 1845-52. Mitchell became devoted to assisting the local community. By draining thousands of acres of wasteland, he was able to provide the locals with jobs, shelter, and a school. The productive Kylemore Estate brought social benefits to the entire region. It included the huge walled Victorian Gardens where all sorts of fruits and vegetables were grown. The gardens had 21 glasshouses and a 60-foot banana house.

Four short years after the Henry’s fairytale castle was completed, the unimaginable happened. The family went on holiday to Egypt where dysentery was raging. Margaret became ill, and despite everything that could be done for her, she died at the age of 45. Mitchell was devastated but remained at the estate where his older children helped care for the younger ones and manage Kylemore Estate. By now, Mitchell Henry was a prominent figure in Irish politics and a founding member of the Home Rule movement. In 1878, four years after Margaret Henry’s death, work began on the neo-Gothic church that’s still part of the estate. The church is a scaled-down replica of the Bristol Cathedral. Mitchell had it built as a lasting testament to his love for Margaret whose remains were placed in a nearby Mausoleum.

In 1903, Mitchell and the Henrys moved back to England. While the estate was still in the Henry family’s ownership, King Edward VII, Queen Alexandra, and Princess Victoria toured the fairytale castle and grounds. They arrived by Royal Yacht at the village of Leenane on July 29. A cheering crowd and a motorcade of nine vehicles escorted the Royals through Connemara on a tour of the Congested Districts of the West.

The Duke and Duchess of Manchester
That same year, a new chapter in the history of Kylemore Abbey began. The Henrys sold the estate to William Angus Drogo Montague, otherwise known as the 9th Duke of Manchester. Unfortunately, the Duke was a notorious spendthrift and squandered the family fortune. Out of money and unable to pay his gambling debts, the Duke found a way around his problems. He met and eloped with a wealthy American heiress, Helena Zimmerman. Helena was the daughter of Eugene Zimmerman, a railroad magnate and major stockholder in Standard Oil. The Duchess moved into the Henry’s romantic fairytale castle with the Duke.

The locals of Connemara were soon disappointed to see that the Duke and Duchess were more interested in their own lavish lifestyle and entertaining friends than managing the estate. While the Duke was on trips to Europe and America, they would spot the Duchess speeding along country roads in her Daimler motorcar.

Needless to say, the money the Duchess inherited from her father dried up after so much partying and entertaining. The Duke and Duchess were forced to sell Kylemore Castle. The Benedictine nuns bought the estate in 1920 and turned it into the first Irish Benedictine Abbey. Future nuns of the Order remain here to this day, and Kylemore Abbey is one of Ireland’s most visited attractions.

As for the Henrys, Mitchell passed in 1910 in Leamington, Warwickshire, England. His remains were brought to the Mausoleum at Kylemore to rest in eternity beside Margaret at the working, self-sustained monastery that was once their beloved home.