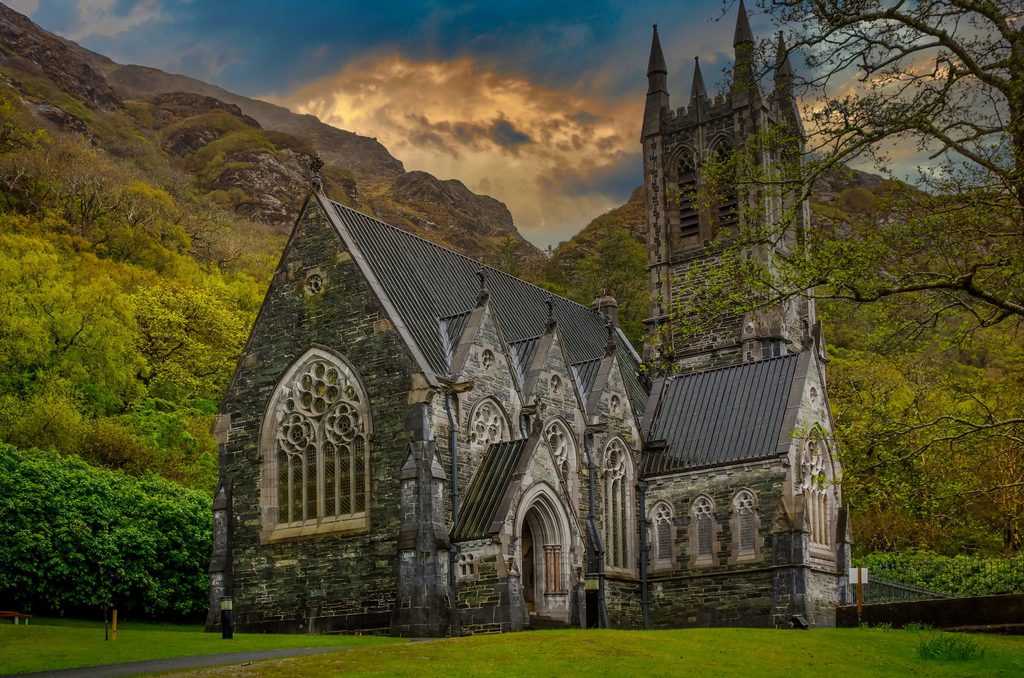 In 1991, the Benedictine nuns of Kylemore Abbey in Connemara, Ireland began a restoration campaign for the Gothic Church that sits on the estate at the abbey. And while the restoration of any archeological gem is remarkable, the church at the Kylemore Abbey has an intriguing history that makes it even more special.

The church was built by Mitchell Henry as a loving tribute to his wife. Margaret Henry died tragically after only four years living in the castle her husband commissioned for her as a romantic gift. The couple had previously honeymooned on the property where the abbey now occupies the former castle.

The church was designed by James Franklin, the same architect that designed the famous Ashford Castle in Cong, Co.Mayo. It was built between 1877 and 1881. The church’s granite facade is reminiscent of the imposing surrounding mountains in Connemara. The interior is highly decorative cream caen sandstone and contrasts sharply with the grey exterior.

Marble pillars set against the sandstone are from the four provinces of Ireland. The green marble is from Connemara (Connaught), the black marble is from Kilkenny (Leinster), the red marble comes from Cork (Munster), and the grey marble is from Ulster.

There was a trap door at the front of the Altar for coffins to be lowered to the vaults below. But it is said that Mitchell Henry could not bear the thought of placing his wife below the ground. He laid his beloved Margaret to rest in a nearby Mausoleum. Before the trap door was sealed closed, three members of the Benedictine Community were buried in the vault.

As decades passed, excessive dampness caused erosion, and the church went into a state of ill repair. It was of great import to the nuns at Kylemore Abbey to save the magnificent tribute to Margaret Henry. Mitchell Henry was instrumental in helping revive the area after the Irish Potato Famine.

They commissioned the help of the European Regional Development Fund, bank loans, and donations. The restored Gothic Church was reopened on April 28, 1995, by President Mary Robinson. The restoration project earned the prestigious AIB Better Ireland Heritage Award in 1998.

Visitors to Kylemore Abbey will enjoy the serenity and a breathtaking landscape on the lakeshore walk out to the Gothic Church. Choirs come from around the world to sing at the church.

Margaret Mitchell spent happy days with her husband and nine children at Kylemore Castle for four years before dying at age 45. She contracted dysentery while on holiday in Egypt. Mitchell Henry placed her remains in the Mausoleum on the estate grounds. After he died in 1910, his ashes were brought to the Mausoleum and laid to rest next to his beloved wife, Margaret.