Songkran Chiang Mai 2019 – Water Festival in Chiang Mai 2019, Songkran – The Thai New Year is a lot of fun and the biggest celebrated festival in Thailand. It originates here in Chiang Mai and is every year held on the 13th- 15th April. Songkran is the longest and most anticipated public holiday in Thailand and commonly the time when Thais who are based in cities like Bangkok returning back home to their families living in small towns or on the countryside.

The Thai New Year has evolved into a spectacular event – you will suddenly see the usually reserved Thais becoming uproarious and with an incredible level of energy waiting on the street for people to pass by, ready to unload their water pistols or to dump buckets full of water. Forget about escaping or finding any safe places! Only monks, babies and elderly are granted a free pass.

Brahmins from India introduced the tradition who believed that the sun passes into Aries which is now considered as the traditional Thai New Year’s Day ‘Wan Payawan’ and held on the 15th April.

Behind the façade of a nationwide water battle comes however a more deeper meaning: Thais traditionally sprinkle the water on one another to give positive blessings and wishes. Furthermore, they get rid of all possessions which brought bad luck the past year and to create New Year resolutions. The word Songkran comes from Sanskrit and means ‘to move forward’.

This amazing festival is not only celebrated throughout entire Thailand, but also its neighbouring countries Laos, Burma and Cambodia.

Which are the best spots for celebrating Songkran 2019 in Chiang Mai? 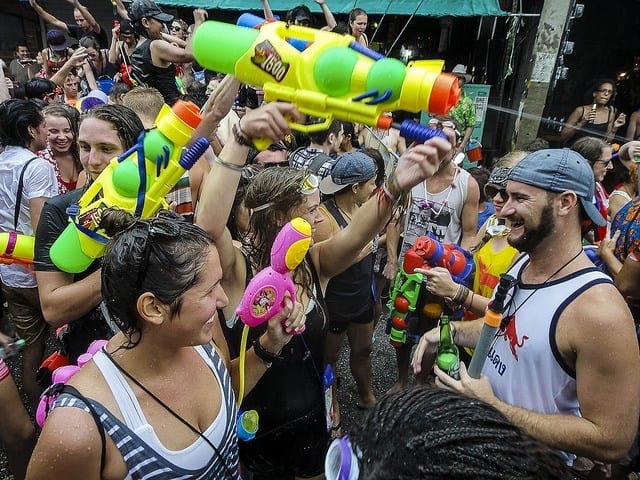 Generally, Songkran is celebrated throughout the entire city. Whether you’re around Thapae Gate, walking along a small alley or outside the town, people have their water buckets -and pistols everywhere ready. The most popular places are around the moat, canals, the Ping River as well as major places such as the aforementioned Thapae Gate or Chiang Mai Gate.

I want to participate in water battles but don’t have equipment.

We hear you! Water pistols in all shapes and sizes are sold around town, from 7 Eleven over Big C and shopping malls to markets. The same vendors usually sell additional items you might need, such as camera and phone covers (highly recommended).

What are the Do’s & Don’ts for Celebrating Songkran ?

1. Be patient and keep cool at all times. You’re an automatic “target” once you step outside the door, so be prepared and don’t complain if you are squirted with a water pistol or a bucket of water is dumped over you (if you liked last year’s ice bucket challenge, you will love Songkran!). Also, beware of people coming up to you to rub a white powder in your face.

2. Don’t wear your best clothes. If you take your camera and mobile phone with you, make sure they’re protected. You can get simple waterproofed phone and camera covers at Tesco and 7 Eleven. Note: the water battles often start 1-2 days earlier – be prepared!

3. If you want to play safe or really don’t like it, stock up on food for 3-4 days, don’t leave your hotel / house or stay at a shopping mall.

4. Avoid driving car or motorbike. As this is the Thai New Year, celebrations are everywhere around town. If you ride TukTuk, be prepared to get soaked. Many people –both, locals and foreigners- get drunk and Songkran in particular is the time when most accidents happening.

5. Avoid swallowing water (especially from water pistols) at all times. A number of people got serious stomach problems in recent years.

6. By law you have to carry your passport at all times. It’s risky though to take it with you, so make copies and shrink and laminate them. 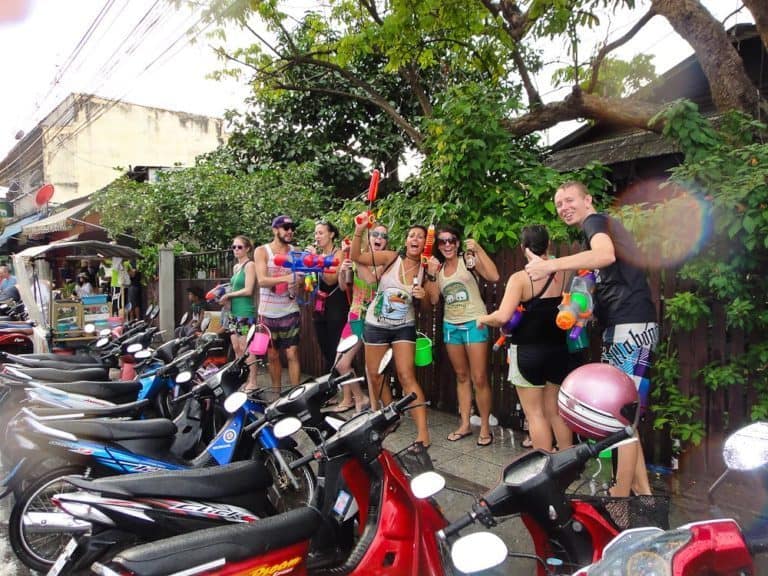 Last but not least

With temperatures above 35 degrees Celsius, Songkran is a great way to cool down. Do make a bit of an effort and try to see the more traditional side of the Thai New Year: wake up early to see Thais going to the temples to make merit. They will also clean Buddha images with herb scented water and build sand pagodas around temple grounds. And don’t forget: though it’s a hell of fun, it is said that getting wet will bring good luck and prosperity for you the upcoming year!

So plan ahead for the Songkran 2019 by booking your accommodation early. Where you book for your accommodation depends on where you plan to celebrate this festival. However, you can choose to stay in Chiang Mai as it is centrally situated where you can access key celebration centers.

Songkran Day Tips: To Help Make The Most Of Your Day Out

What Is The Songkran Festival? (What Does It Mean)