Songkran, When is Songkran? Planning a trip to Thailand during Songkran Festival? Find Out All Info about Songkran Day or Thai New Year (Thai Water Festival) Here!!! 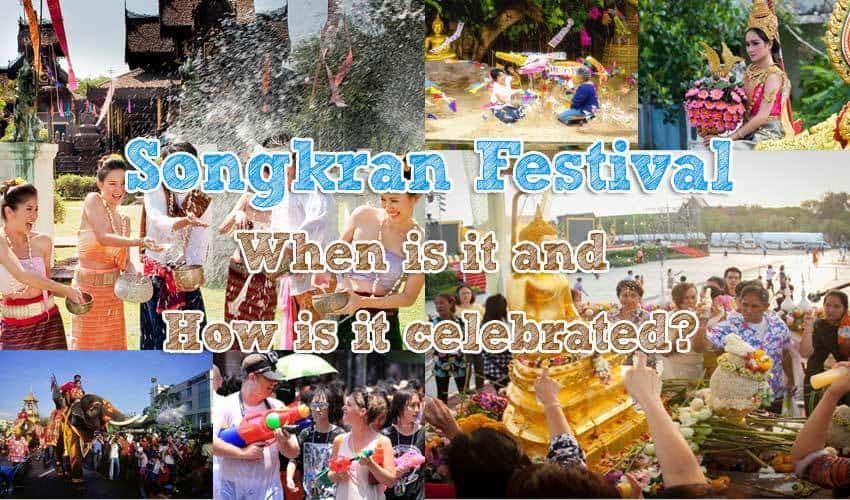 Songkran Festival – When is it and How is it celebrated?

Songkran Festival is the Thai New Year’s Festival which takes place every April. It is also Thailand’s biggest and most famous water festival in Thailand. It marks the start of the traditional Thai New Year.

Songkran is derived from a Sanskrit word saṃkrānti which literally translates to “astrological passage” and means ‘passing’, ‘approaching’, ‘change’, or ‘transformation’. The official holiday runs from the 13th up to the 15th of April but the festivities may last a week or more.

The traditional way of celebrating the water festival involves Thai people splashing water on their elders, family members, close friends, and neighbors as a way of looking for good fortune. They also visit temples and pay homage to the images of Buddha. 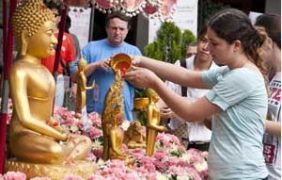 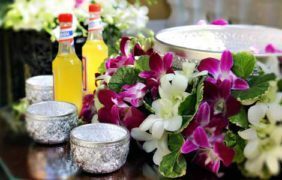 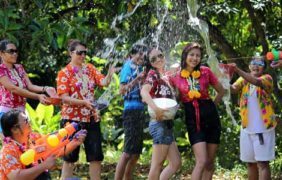 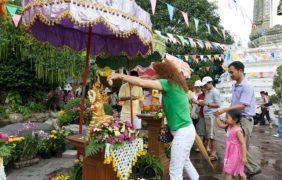 The celebration of Songkran has evolved over the years and is now characterized by crowds of people, including tourists, roaming around and soaking each other. This involves gathering along the streets using water pistols, water hoses, and super soakers, throwing buckets of water, and basically soaking anyone they can see around them.

Although the celebration of Songkran may have evolved, a lot of Thai people still use this holiday as an opportunity to head to their hometowns and spend time with their families and relatives. Buddhists, on the other hand, visit temples and pour water on the images of Buddha and on the hands of Buddhist monks as a sign of respect.

When is Songkran Festival?

Songkran Festival will take place on the 13th to the 15th of April. Before Thailand adopted the international New Year’s Day in 1940, Songkran was dependent on the Lunar calendar of the Thai. Now, it is fixed every 13th to 15th of April for each year. The festivities vary depending on which part of the country you are in.

Where to go for Songkran?

The Thai capital celebrates Songkran in different parts of the city and it is called Bangkok Songkran Splendors Festival. The official opening ceremony is held at Wat Pho, an important Buddhist temple in Thailand that houses a golden giant reclining Buddha. On the first day of the festival, ‘Buddhasihing’, a Buddha image, is brought out from the National Museum and brought along the streets to Sanam Luang (located at the opposite of the Grand Palace) so that people can sprinkle water on it. The image is placed there for three days. 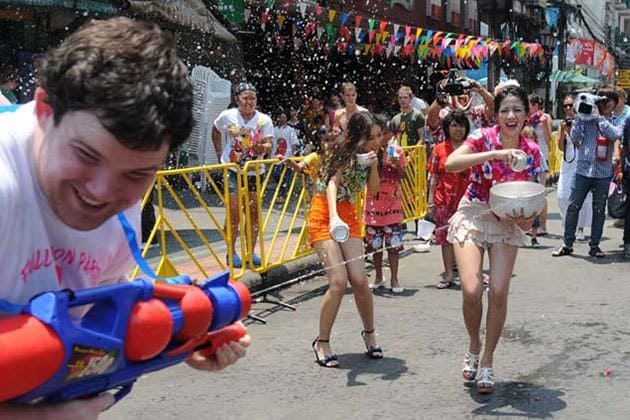 Large and wild crowds fill the streets of Bangkok for the celebration. Khao San Road, a popular area for backpackers, and Silom, the street known for Patpong, are packed with the largest and wildest crowd where thousands of Thais and tourists throw water using water guns, water hoses, or anything that can spray water and get soaked in the middle of a party. There are lots of beer, food, and liquor within those areas.

For the more traditional way of celebrating Songkran, Thais build sand stupas and decorate them with colorful flowers and flags which can be seen around key temples within Rattanokosin. In Phra Phradaeng District, the Thai Raman communities carry on with their traditional Songkran traditions which take place a week later than the celebration in central Bangkok. Enjoy an array of cultural activities such as floral floats parade, Raman dances, ‘saba’ game, Thai-Raman flag ceremony, boat races, and a whole lot more.

Beauty pageants and food fairs are held in Wisutkasat area. 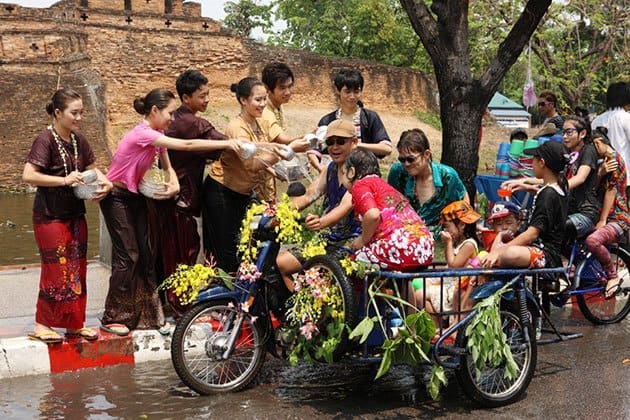 Songkran wet street parties start with light-hearted water fights in Phuket town at around 10 am. The wet street parties turn into water dogfights in the afternoon in Kata and Karon and in Patong. It ends in a full-scale wet war zone in Bangla road until late night. The crowd is divided into two camps:

The famous water festival in Pattaya is a week-long battle that starts a week before the actual Songkran and several days after that. Beach road is filled with foam parties, buckets of ice water, and high-pressure soakers. During the week, there are infrequent ambush points on the streets which are usually around bars and they gradually develop to a full-blown water war.

The main celebration of Songkran in Pattaya falls on the 19th of April which is also known as “Wan Lai”. There is a big splashing event every 19th of April to celebrate Pattaya Songkran Festival. The ‘Kong Khao’ parade takes place during the day in appreciation of the Goddess of Rice. There are also beauty pageants being held where ladyboys are allowed to join the contest. After the parade, they run cultural shows and showcase authentic crafts and Thailand’s rich culture. Thais create amazing sculptures and sand castles at Bang Saen beach.

The traditional celebrations such as spring cleaning at home, spending time with the family, venerating the elderly, and lightly sprinkling or gently pouring warm water on relatives, neighbors, and close friends to wash away the bad luck of the previous year and to give a fresh start for the future. 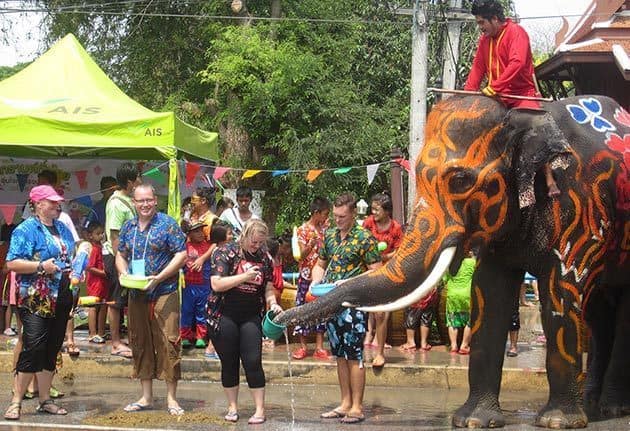 Head over to Phra Nakhon Si Ayutthaya to have a unique experience of Songkran Festival in the country’s ancient capital. Elephants are painted with colors as they join in the water fights and the festivities. The elephants are given drums of water to soak passersby.

You can also join the traditional ethnic activities like offering donations at 7 in the morning to 999 monks dressed in saffron robe in front of Vihara Phra Mongkhon Bophit before freeing fish and birds into the wild and bathing the Buddha with water from a bamboo pipe.

The water splashing can be experienced in the afternoon every day in front of the old city hall.

Khon Kaen is located in Northeast Thailand and is known as the “Sticky Rice” capital. There are also water splashing activities that take place alongside a parade of food fair, decorated ox carts, and Petanque competition.

The main venue for Khon Kaen Songkran is Khao Niew Road. A parade of Flora cart takes place, as well as beauty pageants, and other kinds of entertainment. There are also demonstrations of Thai dances and folk plays.

The water splashing takes place on Khao Nieo Road and the area around Kaen Nakorn Lake.

There are two different types of Songkran experience in Koh Samui. If you want to experience the traditional Songkran, head over to Nathon or in the towns on the west coast where there are only a few resorts and tourists. The celebration is more focused on the traditional aspects but you can still see water splashing on the streets that is much calmer and tamer. It’s a no-holds-barred water war in the east coast resorts such as Chaweng and Lamai. There are a lot of beach, pool, and foam parties taking place during Songkran and all the clubs and bars in and around Soi Green Mango participate where the nightlife street becomes a gauntlet of water gun crossfire. Bophut Beach and Maenam Beach on the north coast are for those who want to experience both as these resorts have the perfect family-friendly atmosphere with the right amount of water splashing too.

Songkran is a festival with a mixture of traditional and modern culture enjoyed by Thai locals and tourists alike.

Songkran Day Tips: To Help Make The Most Of Your Day Out

What Is The Songkran Festival? (What Does It Mean)